Is Coronaphobia keeping Britons at home… or just the colder weather? Data suggests DROP in people driving and shopping in last week despite easing of UK lockdown measures

Britons appear to be heading out less despite the coronavirus lockdown rules being eased, with traffic congestion down during rush hour and fewer people going out to do shopping.

Meanwhile Apple’s mobility index based on its Maps app has found fewer people in London were requesting directions for driving, public transport and walking in the first week of June compared to the last of May.

And footfall data from Springboard showed an 11 per cent fall in people going out to shop yesterday compared to the previous week, with numbers also down for every day back to and including June 3.

Part of the reason behind this could be people less inclined to go out due to the poorer weather, which has turned much cooler and wetter since Britain was enjoying highs of up to 82F (28C) in the days up to June 2.

But experts also pointed out that fewer people are shopping because some retail workers who have been on furlough are now being brought back in to help with planning ahead of non-essential stores reopening on June 15.

Industry bosses are now keenly awaiting to see how many shoppers go back to high streets next week amid concerns over ‘coronaphobia’ where people are too scared to go into busy areas for fear of contracting Covid-19. 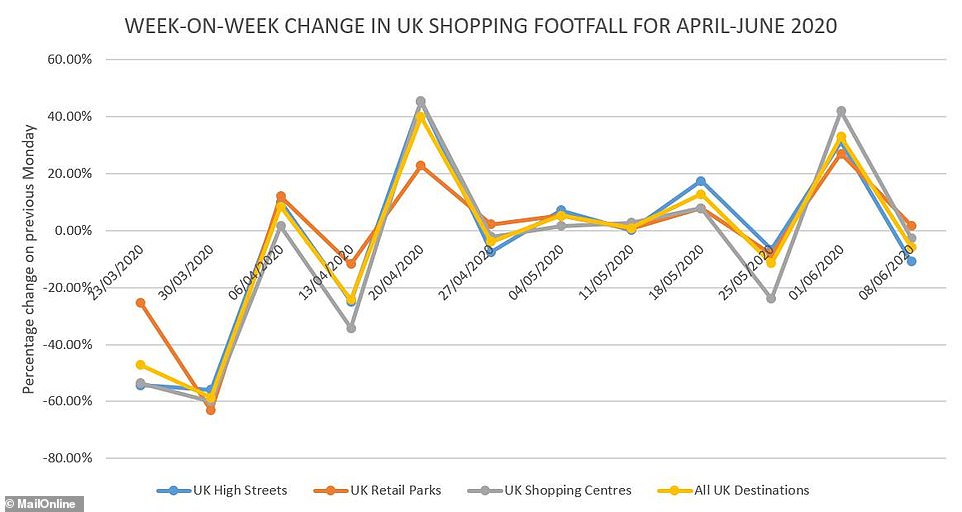 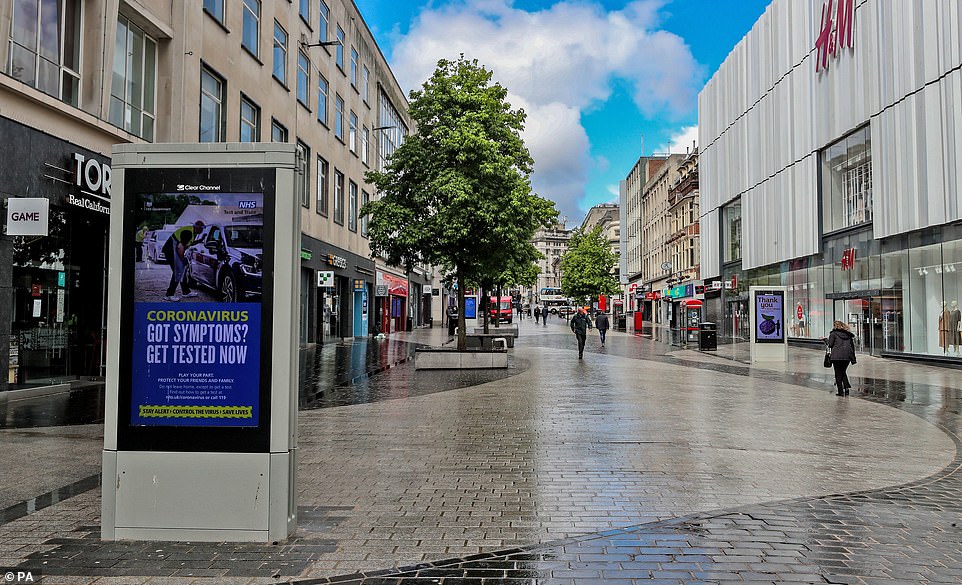 Diane Wehrle, insights director at Springboard, told MailOnline: ‘At least part of this change in footfall is due to the weather, with much cooler weather across the UK from the beginning of June.

‘In addition, some of the retail workforce that will have been on furlough are likely to have been brought back into work to help with the necessary organisation in advance of stores reopening on June 15 thereby reducing the number of consumers free to shop.

‘The continued increase in footfall in retail parks, which is where the majority of stores that are currently open are located, suggests that those who are able to shop are keen to do so.

‘This suggests a degree of pent up demand, and the likelihood of a noticeable rise in footfall in high streets and shopping centres on 15th June and the days and weeks following.’ 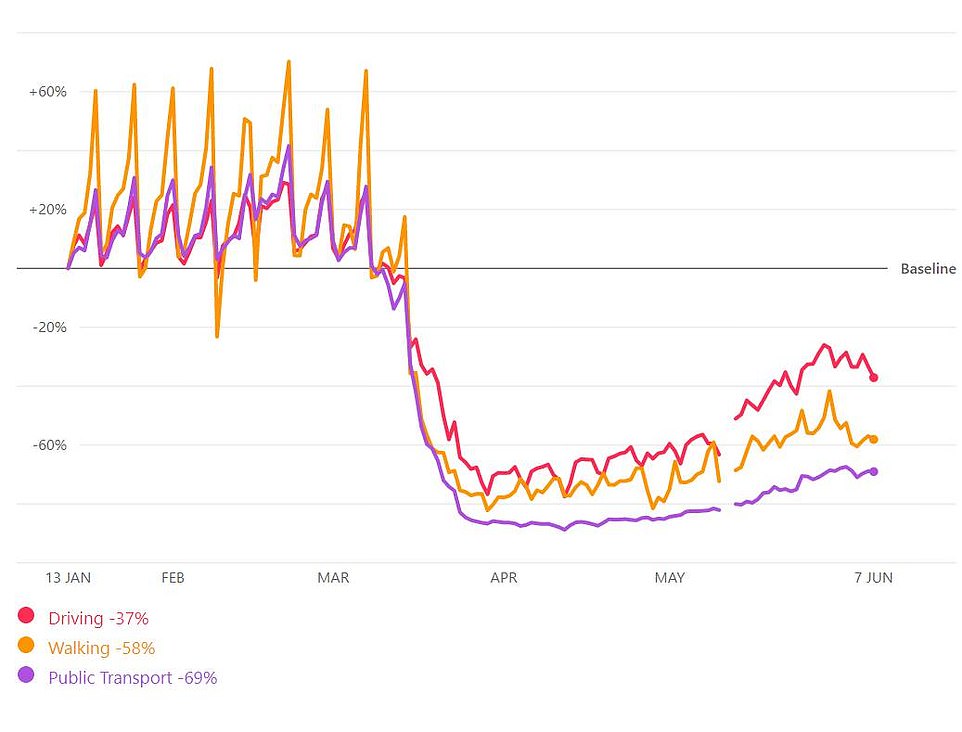 Data from Apple’s mobility index based on usage of its Maps app has found fewer people in the capital are requesting directions for driving, public transport and walking compared to a week before

Activity on some of Britain’s biggest high streets remained around incredible lows in May. Footfall dropped by 73.3 per cent last month, leaving it hovering just above April’s unprecedented 80 per cent drop.

The drop came despite last month being the sunniest May since 1957, which Springboard said boosted turnout on high streets and in retail parks. The analysts also said that shoppers now have huge amounts of pent-up demand.

The major supermarkets in retail parks helped them fare much better than the UK’s high streets, losing only 68 per cent of their footfall, compared with 78 per cent on high streets, and 81 per cent in shopping centres.

Strict lockdown measures were imposed on March 23 to contain the coronavirus pandemic, but have been eased in recent weeks, meaning Britons can meet family and friends as long as they maintain social distancing.

Transport usage dropped sharply from March 14 and they continued to fall until April 12, which was around the peak of the crisis in Britain. But they slowly rose up to the end of May – before falling again at the start of June.

Non-essential retailers, such as shoe shops and department stores are expected to be able to reopen from June 15, and June 22 has been earmarked as when pubs and restaurants across the UK could be allowed to reopen.