Adventure before dementia! That was the rallying cry after DEBORAH MOGGACH – author of The Best Exotic Marigold Hotel – captured a generation’s wanderlust. Now divorcing in her 70s, she recounts her Best Exotic single life adventure, aged 73

Do you remember the first lockdown? Doesn’t it seem an age ago, that beautiful spring when we banged saucepans and jumped up and down to Joe Wicks?

What I do know is that the first lockdown, a year ago last March, was very different to the ones that followed.

For a start, I spent it with my ex. We’d been married for eight years; I’d left London to live with him in a house I’d bought in the Welsh Borders, but in the end it hadn’t quite worked out. It’s funny that I’ve spent my entire life writing novels about marriage but when it came to my own I was as clueless as anyone about why it ended.

A friend of mine says she knew her marriage was over when she stopped giving her husband the last strawberry. That says it all really.

Anyway, we’d been separated for a year or so but hadn’t got round to divorcing. I was 71 and starting a new life in London. When everything shut down, however, I packed my bags and fled back to the marital home in Wales. To be honest, I was terrified of being alone. 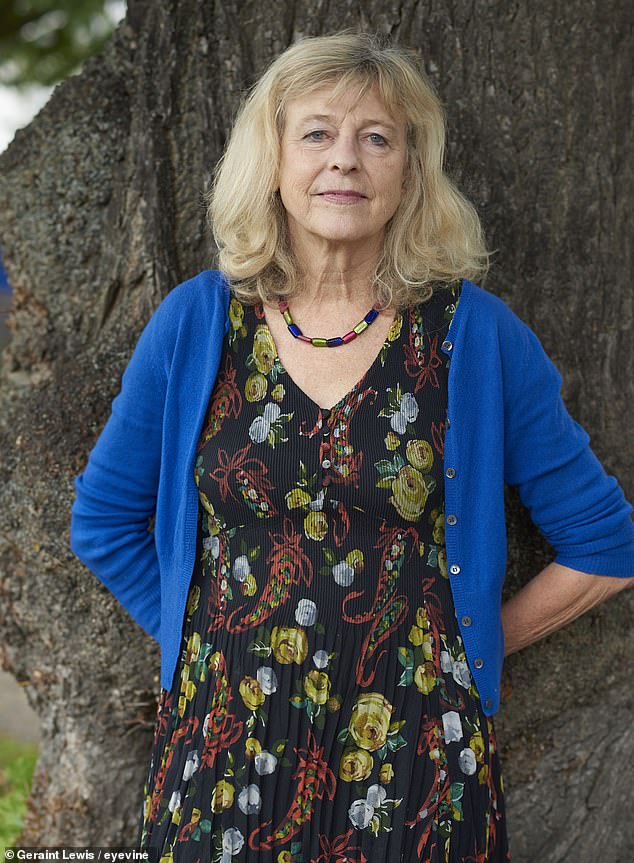 My daughter had kindly offered me a room in her house but nobody knew how long lockdown would last and I didn’t want to outstay my welcome; my son and his family lived in Kent and had no space. My ex and I were still on speaking terms. So I fled back to the small Welsh town where I’d lived for ten years.

Surprisingly, it was a success. Now that we were no longer married, we got on much better. I think we were as astonished as anyone. The pressures and demands had lifted and we were simply companions, looking after each other in an extraordinary situation. It was such a relief, to not be alone — no doubt he thought so too. We joined a WhatsApp group for neighbours; we borrowed a much-borrowed dog for our daily walk (each evening it was absolutely exhausted).

I was writing a novel and tending the garden; we slipped back into our old routines. I also felt companioned by my friends in the town, even though we could only shout greetings across the street. I’d always adored the place, and it had been painful to leave. The glorious countryside was a balm to the soul, just as it was to the lucky people who lived near greenery and found solace in nature.

But I also knew how hard it was for people on their own. My ex and I had several friends of our age, mostly women, who were struggling through lockdown in flats with no gardens, far from their children and grandchildren. I’d written a lot about being an older woman facing life alone.

My novel The Best Exotic Marigold Hotel offered one solution — decamp to India with a crowd of other oldies and launch into another life in the sun. It’s never too late, if you’ve got a freewheeling spirit and an open mind.

What fun that seemed! ‘Adventure before dementia!’ chortled one of the characters. It struck a nerve and was made into a hit film, starring Judi Dench and Maggie Smith. After all, us oldies were no longer behaving our age. We were climbing mountains and dancing round our kitchens and falling in love — I’d got married again in my mid-60s. 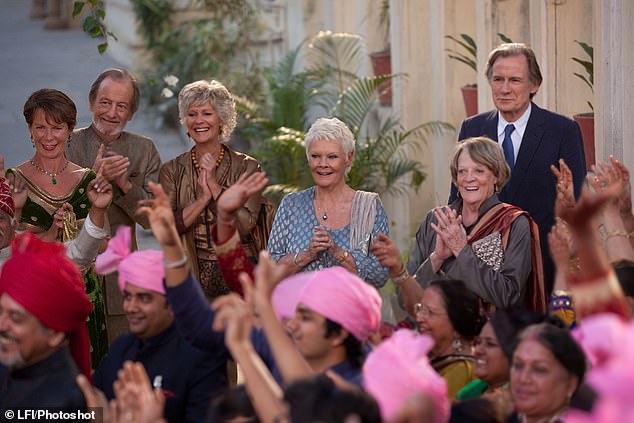 What the ‘Best Exotic’ recognised was that, despite the wrinkles, we’re the same people inside — same jealousies, passions, joys, resentments. Anything was possible, and how thrilling was that?

But suddenly, that day in March, the doors slammed shut. You couldn’t go to the pub, let alone India; the pandemic put paid to that. And it revealed that other, chronic pandemic: loneliness.

This was something that I finally had to face. For I didn’t permanently go back to Wales; that era was finally over. Our brief swan-song was exactly that — a final interlude. Divorce proceedings had now started, and emotionally I was already looking ahead to a new stage in my life, though my ex and I still stayed in touch.

So during the last two lockdowns I’ve been on my own, hunkered down in a cottage on the Kentish coast. We’re sociable creatures, us humans, and it’s been tough, living alone. It’s enough of a shock, being divorced, and the pandemic made it even tougher. And winter made it a whole lot worse.

Remember how it never stopped raining? The national mood had changed and the country seemed sunk in depression and anxiety. Days would pass when I saw nobody at all. I was surrounded by holiday cottages which, due to the pandemic, were empty; at night the street was dark.

As the weeks passed I started to realise what my single friends had been going through. Nobody clattering around in another room; nobody to cook for; nobody to groan with when Matt Hancock came on the telly. Nobody to calm one’s fears. Nobody to answer the door when one’s on the loo. Nobody to have a laugh with.

Terrible things were happening in the world, millions were far worse off, but there was nobody at home to remind me of this and restore a sense of proportion.

I didn’t just miss my friends. I missed those small social interactions that are the stuff of life — the jokes with a bus driver, the chat in a shop, the fleeting glances and flirtations with strangers.

One didn’t realise how much they meant until they were gone. Mask-wearing closed us off and reduced us to wary strangers with gimlet eyes, grimly avoiding each other.

Life dwindled to tiny tasks, eked out. The smallest venture into the outside world was the major event of the day. I even looked forward to putting out the rubbish. My friends and I joked about it on the phone, which became our lifeline. And of course there was no possibility of new friendships, or a new romance.

This was the theme of the novel I was writing — an older woman looking for love. Lockdown just put this into sharper focus and made our isolation all too obvious. Put baldly: there are masses of older women out there — glorious, interesting women — and not enough men to go around. We all know this, of course, it’s staring us in the face.

However decrepit and ancient a bloke might be, he’ll still pull. And nine times out of ten it’ll be a younger model. If not, he’s hung up his spurs and stayed married because he loves his grandchildren and doesn’t want to rock the boat. Maybe he even loves his wife!

But if she dies, he’ll find somebody else pretty fast, because there’s an army of women waiting in the wings, ready to pounce. Within days of the funeral, they’ll arrive at his house, with their casseroles and condolences, and snap him up. In fact one woman I know snaffled a chap during his own wife’s wake.

My new novel, The Black Dress, was inspired by this. Its heroine, Pru, has been dumped by her husband and is utterly devastated. Like an ageing Bridget Jones, she doesn’t want to die alone, her face eaten by Alsatians. Who does?

As the months pass, she becomes desperate for a man. She finds herself becoming bitterly envious of long-married couples walking around hand-in-hand, buying their statins together, helping each other load their Lidl trolley, wandering around garden centres and generally being companionable.

Of course, she’s humiliated by this; she knows she should be a strong, independent woman, but she becomes pretty depressed.

One day, due to a mix-up, she finds herself at a stranger’s funeral. ‘I don’t know anybody here, do you?’ murmurs one of the guests. Pru realises this is true. At funerals all sorts of people come out of the woodwork, long-ago acquaintances — distant cousins and old school friends.

She thinks nothing of it at the time, but, a few weeks later, she’s passing a charity shop and sees a little black dress in the window. On impulse she goes in and buys it. For that funeral has triggered an idea — an idea so preposterous it takes away her breath.

So Pru gets to work and searches all the death notices in the local papers. When she finds that a woman her age has died, she gatecrashes the funeral in order to get first dibs on the grieving widower. For, as her friend Azra says, ‘You’ve got to move fast.’

And if anyone asks, she’ll cobble together some past connection to the deceased.

It’s an insane plan, of course, but to Pru’s surprise she has some success. She finds she’s a fluent liar, and meets some not unattractive widowers.

At the very first wake, she strikes up a flirtation with a charming vet who invites her back for spaghetti alle vongole. All goes swimmingly until, needless to say, things start to go wrong.

I had a lot of fun writing this novel, because Pru’s escapades lead to some unexpectedly comic encounters, and there are many twists and turns until the whole thing becomes pretty dark.

It sustained me through lockdown because I could escape into another world. That’s the lovely thing about being a writer. My characters became my companions, and this saved my sanity.

The other life-saver was my son and his family. He lived a mile away with his wife and two little daughters. We formed a bubble, but until I was vaccinated he was very protective of me and we only met, briefly, outdoors.

And now we’ve been jabbed it has all eased, and it’s almost like the old days. Hopefully things are starting to become slightly more normal for all of us.

But the biggest lesson I’ve learnt is how to be content with my own company — in fact, to enjoy it. Perhaps writing the novel flushed the loneliness out of my system. Perhaps, now summer’s here, life has opened up and we all feel more liberated.

Lockdown has taught me how to look after myself — filling the house with flowers, cooking nice meals and listening to classical music. I used to dread the evenings but now I look forward to them, partly because there’s great stuff on Netflix and the BBC.

If you’re struggling, the Mental Health Foundation website has useful strategies on how to plan your day and deal with it all. One of the best is to consider this a different period in your life — an interesting period — rather than a purely negative one.

And quite honestly, after this is over, living alone will be a breeze. I’ve stopped thinking about life in the terms of men, and now think of it in terms of myself, and those I love.

The Black Dress by Deborah Moggach is available to pre-order now, and is published on July 22.