A group of dolphins have been photographed being transported by the U.S. Air Force aboard a C-17 Globemaster transport plane, as they head on a top secret mission organized by the Navy.

The dolphins were being taken to an unknown location where the Navy will train them how to seek undersea mines.

Just as the Army uses patrol dogs to sniff out explosives, the Navy uses the mammals to hunt out the dangerous mines, which could destroy ships and sailors if left to explode. 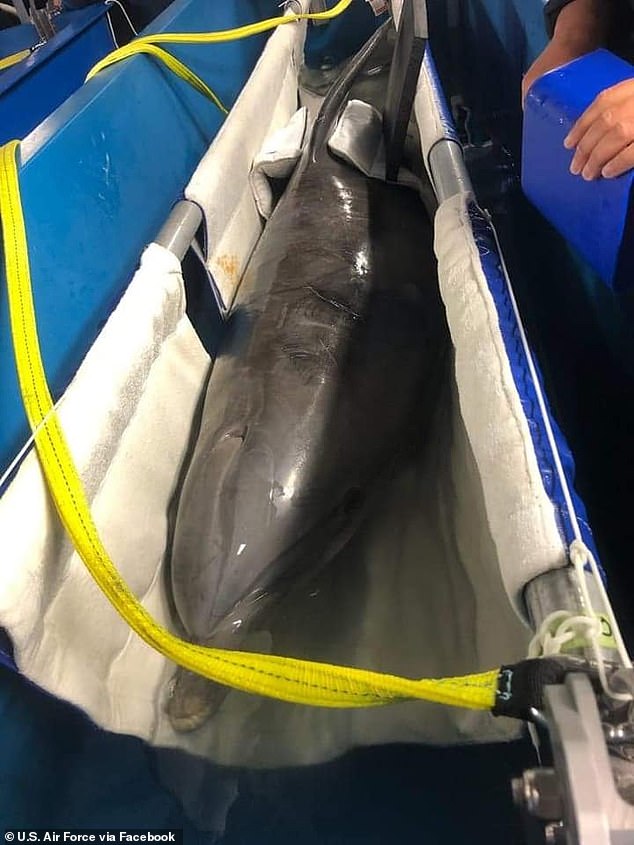 In an image posted to Facebook the U.S. Air Force transported a group of U.S. Navy Dolphins, or as the Navy designates them, Mark 7 Marine Mammal Systems, aboard a C-17 Globemaster 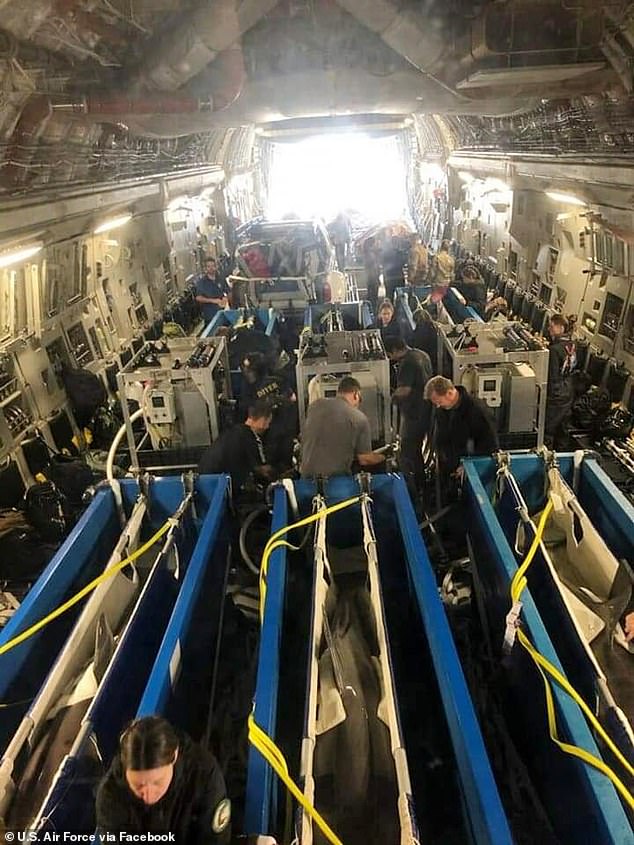 The mammals are far more adept and quicker at finding the mines than human divers.

The dolphins are trained to search for sea mines in a particular stretch of water using their sonar which is far more sophisticated than any man-made detection device.

Upon finding one, the animal is trained to release a tag which floats up to the surface, allowing humans to investigate the find and neutralize the mine.

The photos of the dolphins placed in tanks in the cargo plane were posted online to an Air Force Facebook group.

On board the cargo plane, the dolphins were seen suspended and held in place in fleece-lined stretchers in fibreglass containers filled with water to support their weight on the trip to the training exercise location.

The Navy’s $28 million marine-mammal program dates back to the late 1950s and once included killer whales and sharks.

At first, the Navy studied the hydrodynamics of dolphins in order to improve torpedo, ship and submarine designs.

But officials soon realized the mammals could be valuable mine clearers, because they were highly reliable, adaptable and could be trained to search for, detect and mark the location of objects in the water and thus, the program was born.

In the early days the Navy tried working with all sorts of whales including killer whales, Steller sea lions, grey and fur seals. 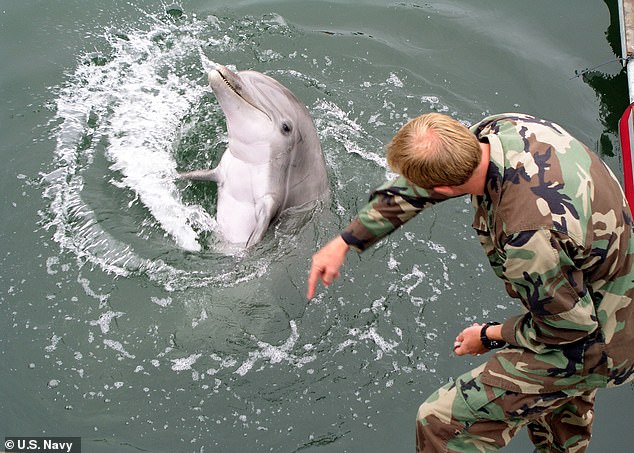 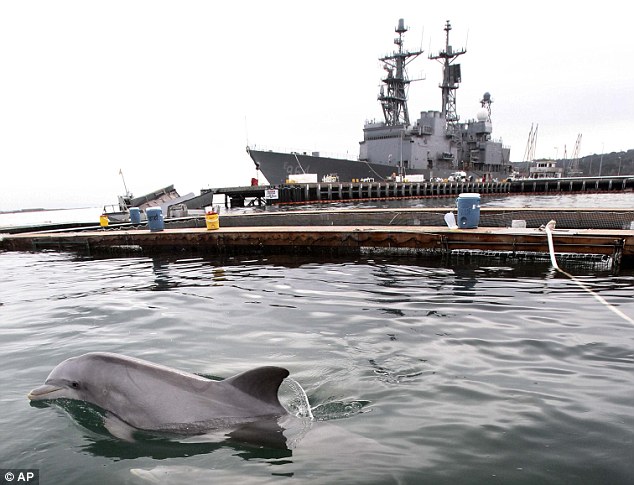 Dolphins are trained by the navy to locate undersea mine and they are able to perform the task far quicker than human divers (pictured an adult and baby Atlantic bottlenose dolphin in one of the pens at the Navy facility on Point Loma, California)

Based in San Diego, it currently uses 80 bottle-nosed dolphins and 40 California sea lions, however, they are not referred to as dolphins but as ‘the Mark 7 Marine Mammal System’.

Using their sonar, the mammals find and mark mines in shallow water, in deep water when tethers are used, and on the sea floor where sediment cover and plant growth can hide the devices.

Dolphins are carried aboard Navy ships in large movable pools, about 20 feet in diameter.

Most of the Navy’s dolphins and sea lions are housed at Point Loma Naval Base, in pools sectioned off from the bay. Others guard Navy submarine bases in Georgia and Washington state. 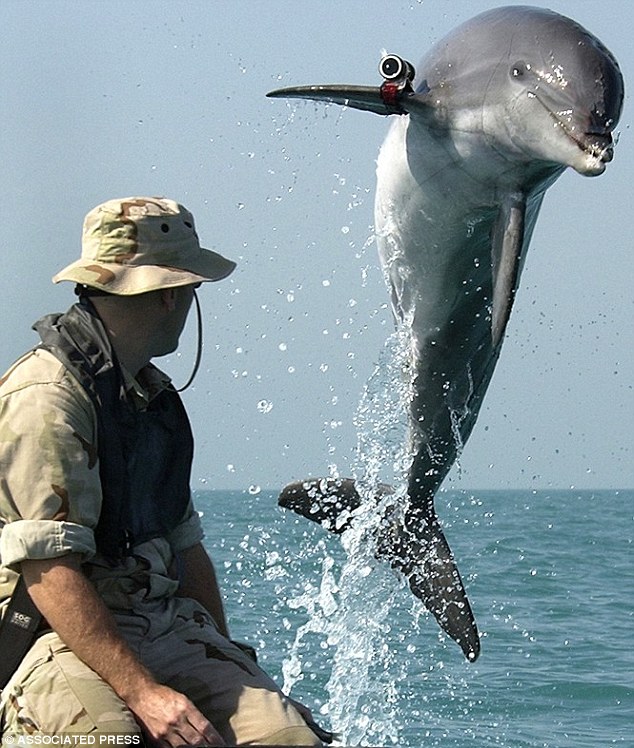 A bottlenose Navy dolphin leaps out of the water while training in the Arabian Gulf. A pinger device strapped to its fin allows the handler to keep track of the dolphin when out of sight

The military is responsible for the mammals’ care throughout their lives, even after they’re retired from active duty. Sometimes Navy dolphins are loaned to animal parks, such as Sea World, later in life.

Before the animal missions became declassified in the early 1990s there was much speculation the Navy abused the animals they worked with.

Animal activists claimed the dolphins were being used as offensive weapons and to harm humans. The Marine Mammal Commission found the allegations to be false after an investigation in 1988 and again in 1990.

In recent years, dolphins have been deployed to Iraq and Bahrain to patrol for enemy divers and mark the locations of mines.

Today, bottlenose dolphins and California sea lions are the mammals of choice.

They protect ports and Navy assets from swimmer attacks, locate and attach recovery equipment to exercise and training targets as well as locate sea mines. 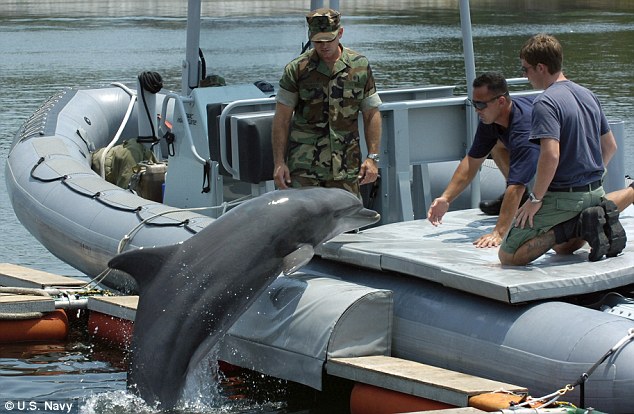 The Navy has also developed its Dolphin Breeding Program, in which calves are born and trained to follow small boats and how to slide out of the water onto beaching trays before being ready for service

They can be readied for a mission within 72 hours and on short trips will swim alongside a small boat. For longer journeys they ride shot-gun on ships or as the pictures show, by air in cargo planes.

The creatures were last seen in public during Rim of the Pacific (RIMPAC) exercises in 2018.

Although it is not known where the dolphins were taken to, the aircraft was serviced by a Maintenance Repair Team from the 60th Maintenance Squadron, based at California’s Travis Air Force Base.

The dolphins seem to enjoy their work. The Navy claims to release the mammals ‘almost daily’ untethered into the open ocean. Almost all report back for duty, with only a few having not returned since the program began.

The Navy has also developed its Dolphin Breeding Program, in which calves are born and trained to follow small boats and learn how to slide out of the water onto beaching trays before being ready for service.

The program means no wild mammals have been captured since 1988.

But it’s not all work and no play. At the end of a long day’s training the calves’ mothers take a well deserved nap while their offspring enjoy a game of tag and chase.