Brussels: The European Union and Turkey agreed to review a four-year-old deal on managing migrants and refugees in an effort to settle a dispute that sent thousands of people to the Turkey-Greece border in hopes of reaching Europe, top EU officials said.

Under the 2016 agreement, the EU offered Turkey up to €6 billion ($10 billion) in aid for the Syrian refugees it hosts, fast-tracked EU membership and other incentives to stop Europe-bound migrants. The number arriving in Greece from Turkey dropped dramatically after the deal took effect. 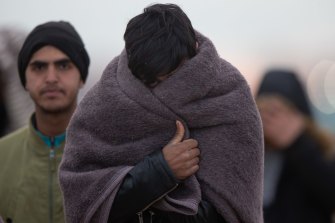 Refugees and migrants walk with their belongings to the Turkey’s Pazarkule border crossing with Greece’s Kastanies on Saturday.Credit:Getty Images

After talks with Turkish President Recep Tayyip Erdogan in Brussels on Monday, European Council President Charles Michel said teams headed by the EU foreign policy chief and Turkey's foreign minister would work "in the next days to clarify the implementation of the deal between Turkey and the EU to be certain that we are on the same page."

European Commission President Ursula von der Leyen said that during the talks with Erdogan "there was a clear focus on, 'Let's discuss what is fact. Let's sort out how both sides see the past and how we evaluate the EU-Turkey statement'."

The Turkish leader left without speaking to the media. Officials from his office described the talks as "productive".

Turkey hosts more than 3.5 million Syrian refugees, and Erdogan has demanded that Europe shoulder more of the burden of caring for them. 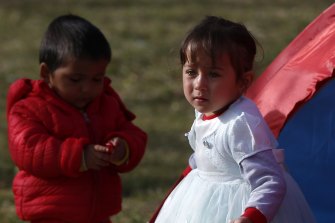 Children stand outside a tent in a field in Edirne, near the Turkish-Greek border on Sunday. Germany is considering taking in young children to help Turkey manage the increasing volumes of migrants and asylum seekers.Credit:AP

Germany's coalition government said early on Monday the country was willing to "support Greece regarding the difficult humanitarian situation of about 1000 to 1500 children on the Greek islands."

The government said Germany could host children in dire need of medical treatment or those who were unattended minors younger than 14, especially girls. It didn't say exactly how many children Germany would take, but said an agreement would be negotiated by a European "coalition of the willing" in coming days.

Erdogan has accused the EU of not meeting its obligations under the 2016 agreement, including failing to pay money promised to stem the flow of migrants to Europe. 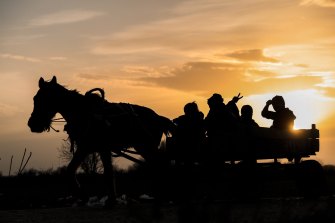 A migrant flashes a victory sign as he rides with others in a cart near the Turkish-Greek border on Sunday.Credit:AP

The EU says it is disbursing the funds but also accused Erdogan of "blackmail" for waving migrants through to Europe in the last few weeks after dozens of Turkish soldiers were killed in fighting in northern Syria.

Asked whether Erdogan promised to restart efforts to prevent migrants from leaving the country, Michel said, "What's in the statement, and what's in the camp of Turkey has to be fulfilled".

EU countries have rallied behind Greece, which is also a member of NATO, and described it as a "shield" protecting Europe's borders with the outside world.

Earlier, a high-level Turkish official, speaking on condition of anonymity in line with government rules, said the sides would discuss a possible revision of the agreement. It wasn't immediately clear if the review would lead to one.

Erdogan had also been expected to raise concerns over alleged violence by Greek authorities as they push migrants back to Turkey.

Greece has deployed riot police and border guards to repel people and the border area has since seen violent confrontations. On Saturday, youths threw rocks at Greek police and tried to pull down a border fence.

Many migrants have alleged mistreatment at the hands of Greek police, and Turkey says two migrants were killed in violence along the border. Greece has denied the accusations.

Von der Leyen said that the use of "excessive force" was unacceptable and that security action should be "proportionate," but the EU has generally been unwilling to openly criticise the actions of the police.

Tens of thousands of migrants were already in Greece before Turkey announced its borders open, many of them in massively overcrowded camps on Greek islands facing the Turkish coast.

Part of the 2016 EU-Turkey deal stipulates that new arrivals must remain on the islands pending deportation unless they successfully apply for asylum in Greece.

The situation on the Greek-Turkish land border was generally calm on Monday. Greek authorities said in the 24 hours to Monday morning, they had blocked 1646 attempts to cross the border and arrested two people – one Moroccan and one Egyptian.