Europe’s medicines watchdog today announced it will probe thousands of reports of women suffering menstrual changes after getting Covid vaccines made by Pfizer or Moderna.

It will look through all the reported incidents in the EU and clinical trial data, as well as review the scientific literature.

The EMA’s panel previously investigated the connection between irregular periods and Covid vaccines but could not establish a firm link. It is reopening the case after receiving ‘spontaneous reports of menstrual disorders’ more recently.

Women around the world have reported an irregular period after getting the mRNA vaccines, with some studies suggesting the issue affects four in 10 women.

But the EU regulator says there is still no reason to believe the jab impacts fertility — a concern which has driven hesitancy among women. Period irregularities can also be triggered by a Covid itself, other medical conditions and tiredness.

So far studies have either pointed to small and short-lived period disruption post-vaccination, or not found a link at all.

More than 50,000 reports of period changes have been logged in the UK alone, triggering a review by the Medicines and Healthcare Products Regulatory Agency (MHRA). 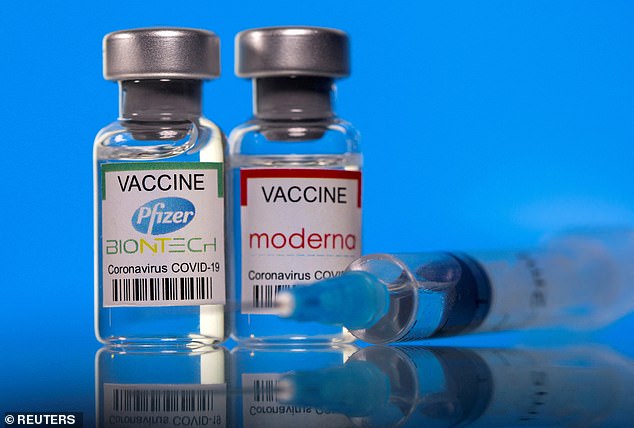 The European Medicines Agency (EMA) said it will investigate whether there is a causal link between Pfizer and Moderna’s Covid vaccines (pictured) and period irregularities, but warned there is no evidence to suggest the jabs affect fertility

The EMA’s Pharmacovigilance Risk Assessment Committee (PRAC), which oversees the safety of medicines, is carrying out the assessment.

It will review all available evidence on mRNA vaccines and period changes among women, including reports from vaccinated women, clinical trials and studies.

They will be looking into whether the jabs triggered heavy periods — bleeding that affect a person’s quality of life — or temporarily stopped periods — medically known as amenorrhea, when a woman does not have a period for three months or more.

Data examined so far does not suggest there is a link between getting a Covid vaccine and changes to periods, the MHRA said.

But up to February 2, the watchdog had received 50,060 reports of menstrual disorders after getting a Covid jab.

Nearly 72million Covid vaccines had been given to women by then.

The MHRA said most reported irregularities have been short-lived and there is no evidence the jabs affect fertility.

It notes that period problems are ‘extremely common’ and usually stress-triggered, but those who have had Covid and those suffering from long Covid have also reported menstruation disruption.

A study of more than 4,000 women in the US found periods lasted 15 hours longer in women who had a first dose and 19 hours longer among double-jabbed.

But the Oregon Health and Science University scientists leading the study said the changes were ‘small’ and ‘temporary’.

And an Imperial College London study of 1,200 women revealed no definitive link between period changes among vaccinated women.

But researchers noted that those taking the contraceptive pill were more likely to experience period changes compared to those not taking it.

The length of the menstrual cycle varies between individual women, but the average is every 28 days.

However, cycles as short as 21 days or as long as 40 are not considered unusual.

The NHS advises women to contact their GP if their periods are irregular in certain situations.

Irregular periods can also lead to problems when women are trying to get pregnant as it becomes difficult to accurately track ovulation, the time when they are most likely to conceive.

Q&A: Everything you need to know about Covid vaccines in pregnancy

Are vaccines safe for pregnant women?

There is no evidence the vaccines cause a different reaction in pregnant women.

Side effects reported by expectant mothers are similar to those seen among non-pregnant women.

Real-world data does, however, show mothers-to-be face a greater risk from Covid, especially if they get infected in their third trimester or have underlying health conditions.

The Royal College of Obstetricians and Gynaecologists warn pregnant women are slightly more likely to give birth prematurely or suffer a stillbirth if they catch Covid.

And NHS chiefs last month revealed one in five Covid patients on ventilators were expectant mothers who had not been jabbed.

Could vaccines harm babies in the womb?

Experts have uncovered no proof that the jabs can harm babies in the womb — and insist there’s no reason to suspect they would either.

Covid vaccines do not contain ingredients that are known to be harmful to pregnant women or to a developing baby.

Nor do they contain organisms that can multiply in the body, so they cannot infect an unborn baby in the womb.

Studies of the vaccines in animals to look at the effects on pregnancy have shown no evidence jabs cause harm.

Research from six studies involving 40,000 women show the vaccines don’t raise the risk of miscarriage, preterm birth, stillbirth, or the baby being born smaller than usual or with birth defects.

Can vaccines make it harder to get pregnant?

There is also no evidence the Covid vaccines hamper a woman’s chances of getting pregnant.

The Association of Reproductive and Clinical Scientists and the British Fertility Society says there is ‘absolutely no evidence, and no theoretical reason, that any of the vaccines can affect the fertility of women or men’.

But some concerns have been raised because thousands of women have recorded disrupted period after getting the jabs.

By February 2, the UK medicines watchdog, the Medicines and Healthcare Products Regulatory Agency (MHRA), had received 50,060 reports of menstrual cycle side effects after first, second or third doses of the Covid jabs.

Nearly 72million Covid vaccines had been administered to women up to the same date.

The side effects included heavier or lighter bleeding than usual, as well as more painful periods. But the MHRA said the changes are ‘transient in nature’ — meaning they are short-lived.

Period problems are very common — with up to a quarter of women of childbearing age reporting them at any one time —  and are often triggered by stress.

Why were vaccines not initially offered to pregnant women?

Like other vaccines and medicines, clinical trials of the Covid jabs did not include pregnant women.

This meant the UK’s vaccine advisers, the Joint Committee on Vaccination and Immunisation (JCVI), did not have enough evidence to recommend pregnant women should get vaccinated when jabs were initially rolled out last winter.

But real-world data from the US — where 90,000 pregnant were given doses of Pfizer or Moderna — did not reveal any safety concerns.

So the JCVI advised that these jabs should be offered in the UK.

And subsequent studies show the jabs were just as effective in pregnant women as those who were not pregnant.