Facebook has caused ‘significant setbacks for civil rights’ by failing to act on content including Trump’s posts about mail-in ballots, according to damning two-year audit

Facebook has made a series of decisions that undermined civil rights, including allowing posts from President Donald Trump that violate the values of the leading social network, an independent audit report said Wednesday.

The audit commissioned by Facebook in 2018 found the California giant had taken ‘important steps forward in building a long-term civil rights accountability structure’ but ‘are not sufficient and should not be the end of Facebook’s progress.’

Despite progress, ‘the auditors are concerned that those gains could be obscured by the vexing and heartbreaking decisions Facebook has made that represent significant setbacks for civil rights,’ the 100-page report said.

The auditors expressed particular alarm at Facebook’s reluctance to take action on posts from Trump this year which ‘allowed the propagation of hate/violent speech’ and ‘facilitated voter suppression.’

The posts, on May 20, were about mail-in ballots. Trump had said they were ‘fraudulent’ or would amount to ‘voter fraud’, which the auditors say was harmful false information that Facebook should have removed.

To the civil rights community, there was no question that these posts fell squarely within the prohibitions of Facebook’s voter interference policy.

Facebook’s constrained reading of its policies was both astounding and deeply troubling for the precedents it seemed to set. 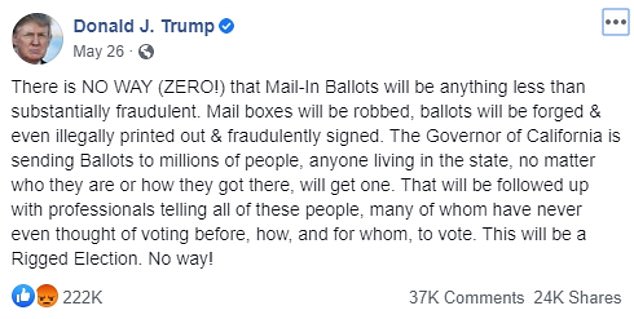 These are among the posts the auditors said were harmful. Trump posted them on May 20 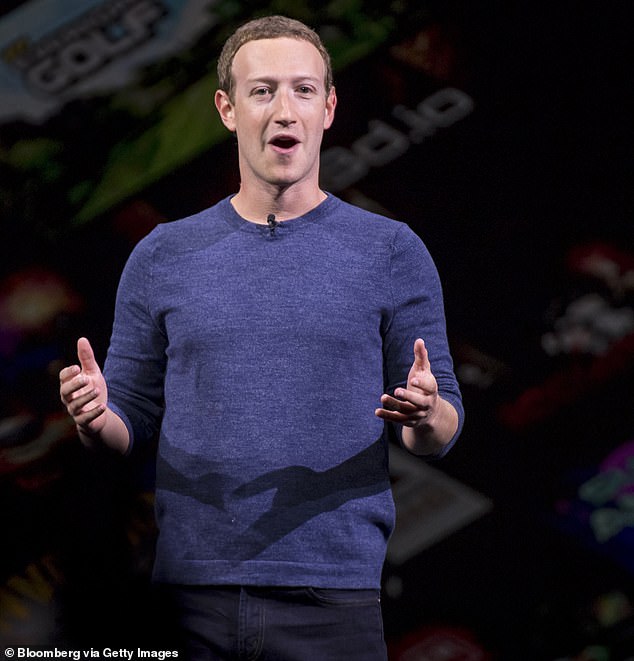 Zuckerberg met with boycott leaders on Tuesday but the meeting was ‘disappointing’ and ‘full of spin’, they said

‘The civil rights community identified the posts as false for labeling official ballots and voting methods illegal. They explained that for an authoritative figure like a sitting President to label a ballot issued by a state “illegal” amounted to suppression on a massive scale, as it would reasonably cause recipients of such official ballots to hesitate to use them.

Organizers of a Facebook boycott campaign that has the support of thousands of major advertisers have slammed Mark Zuckerberg for doing ‘just about nothing’ to remove hate speech from the site.

Leaders of the #StopHateForProfit campaign lashed out after a ‘disappointing’ meeting with the social media CEO and other top brass which they said showed Facebook ‘is not yet ready to address the vitriolic hate on their platform’.

Anti-Defamation League CEO Johnathan Greenblatt, who was at the virtual meeting on Tuesday, said ‘we saw little and heard just about nothing’ about how the social network is planning to remove toxic content.

Jessica Gonzalez, from activist group Free Press, added: ‘This isn’t over. We will continue to expand the boycott until Facebook takes our demands seriously. We won’t be distracted by Facebook’s spin today or any day.’

The hour-long meeting included CEO Zuckerberg, his chief operating officer Sheryl Sandberg and other Facebook executives in discussion with the Anti-Defamation League, the National Association for the Advancement of Colored People, Color of Change and other groups.

It was seen by Facebook as an opportunity to hear from boycott organizers and ‘reaffirm’ a commitment to combating hate on the platform, a spokesperson told AFP.

‘They want Facebook to be free of hate speech and so do we,’ the spokesperson said, noting steps the social network has taken to ban white supremacist groups and fight interference with voting or the census.

‘We know we will be judged by our actions not by our words and are grateful to these groups and many others for their continued engagement.’

The activists, who have backing from the likes of Coca-Cola Unilever and Starbucks, are demanding that Facebook implement ten new policies to combat misinformation and hate content on its site.

They include submitting to independent audits, refunding advertisers whose products appear alongside extremist content, and to stop recommending hate groups to users via algorithms.

Yet campaigners say that Zuckerberg and Sandberg failed to agree to a single demand and instead fired up a ‘powerful P.R. machine’ in an attempt to placate the other groups.

‘Persons seeing the President’s posts would be encouraged to question whether they would be doing something illegal or fraudulent by using the state’s ballots to exercise their right to vote.

Facebook’s inaction ‘seems to reflect a statement of values that protecting free expression is more important than other stated company values.’

Facebook allowed the three posts from Trump in May to remain and ‘asserted that the posts did not violate its community standards,’ the report said.

The auditors ‘vigorously made known our disagreement,’ and claimed they ‘clearly violated Facebook’s policies,’ it added.

‘These decisions exposed a major hole in Facebook’s understanding and application of civil rights….We believe civil rights expertise was not sought and applied to the degree it should have been and the resulting decisions were devastating.’

The action could ‘establish terrible precedent for others to emulate,’ the audit stated.

In recent weeks, Facebook did appear to make some changes, in one case removing a Trump campaign ad using a Nazi symbol. The company also said it would tag posts from world leaders that violate its policies even if they remain accessible because they are ‘newsworthy.’

The report detailed steps the social network has taken to fight bigotry, election tampering and more, but contended that the efforts are inadequate.

‘Unfortunately, in our view Facebook’s approach to civil rights remains too reactive and piecemeal,’ the report said.

The report recommends that Facebook build a stronger civil rights infrastructure that includes experts on key topics such as elections and hate speech, with a full-time team working under a ‘civil rights vice president’ at the California-based company.

The report also calls for an interpretation of Facebook policy against voter suppression that prohibits content such as misleading Trump posts about the integrity of mail-in voting.

‘Facebook has made policy and enforcement choices that leave our election exposed to interference by the president and others who seek to use misinformation to sow confusion and suppress voting,’ the report said.

The report also advised Facebook to go beyond banning explicit references to white separatism and white nationalism to also prohibit them being praised, supported or represented at the social network.

The audit led by former American Civil Liberties Union lawyer Laura Murphy was launched at the behest of civil rights organizations and members of Congress seeking to ensure that ‘civil rights laws and principles are respected, embraced, and robustly incorporated into the work at Facebook,’ according to the report.

The review covered a range of Facebook policies including workforce diversity, algorithmic bias, election and census interference and advertising practices.

Facebook said the audit report points out its progress and shortcomings and makes it clear that more needs to be done.

‘This two-year journey has had a profound effect on the way we think about our impact on the world,’ Facebook chief operating officer Sheryl Sandberg said of working with the auditors.

‘We have made real progress over the years, but this work is never finished and we know what a big responsibility Facebook has to get better at finding and removing hateful content,’ she said.

Facebook said it is putting some of the audit proposals into practice, and made ‘a commitment to hire a civil rights leader who will continue to push us on these issues internally,’ according to Sandberg.

The report comes a day after Sandberg and Facebook chief executive Mark Zuckerberg met with organizers of a Facebook ad boycott pressing for more aggressive action on hateful content and disinformation.

The activists said they were disappointed and vowed to press on with their campaign which has grown to nearly 1,000 advertisers.