A CRUISE liner hit by the coronavirus and quarantined with 140 Brits on board has been branded a death ship by terrified families of passengers.

They are desperate for their loved ones to be allowed off the Grand Princess, which has more than 3,500 passengers. 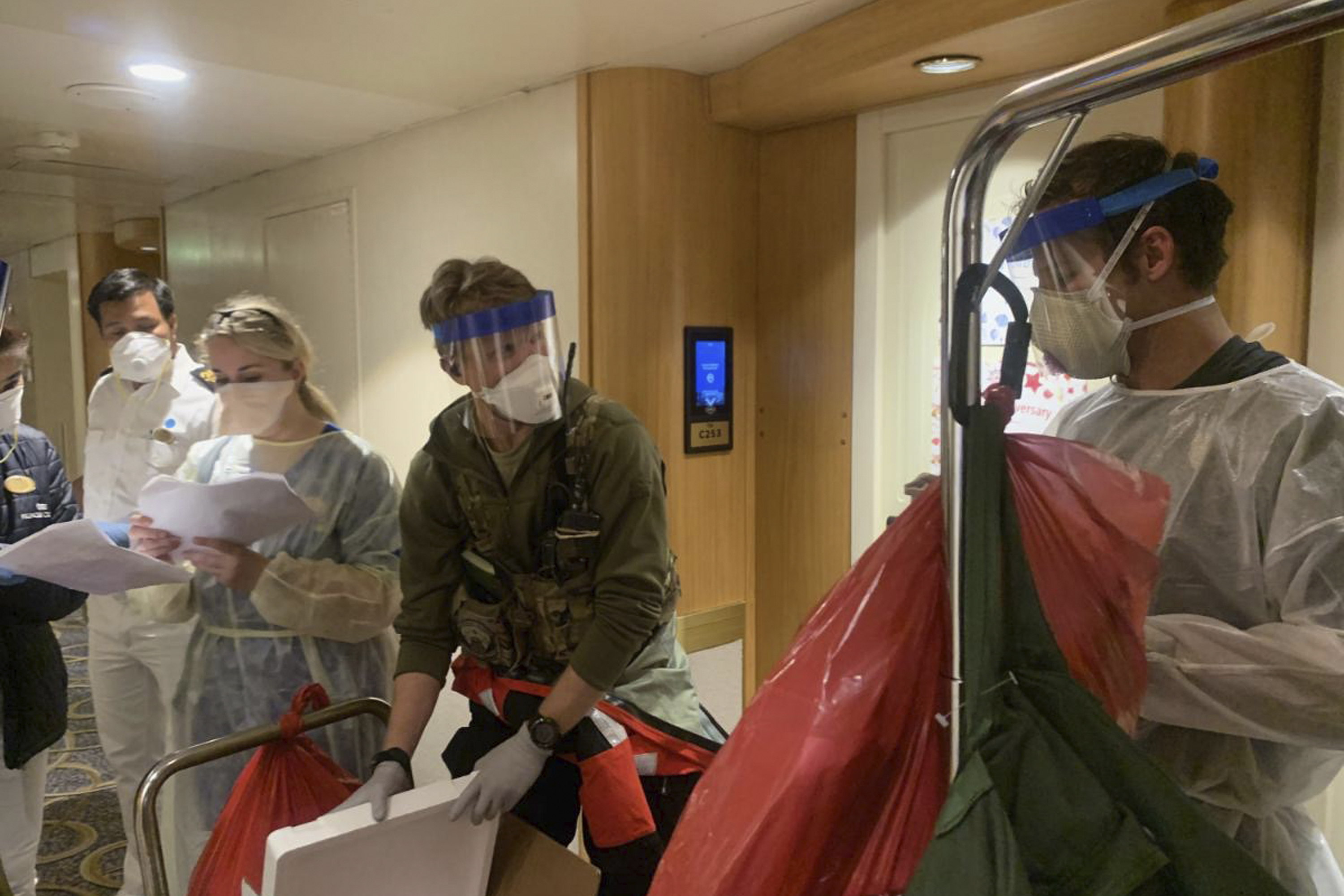 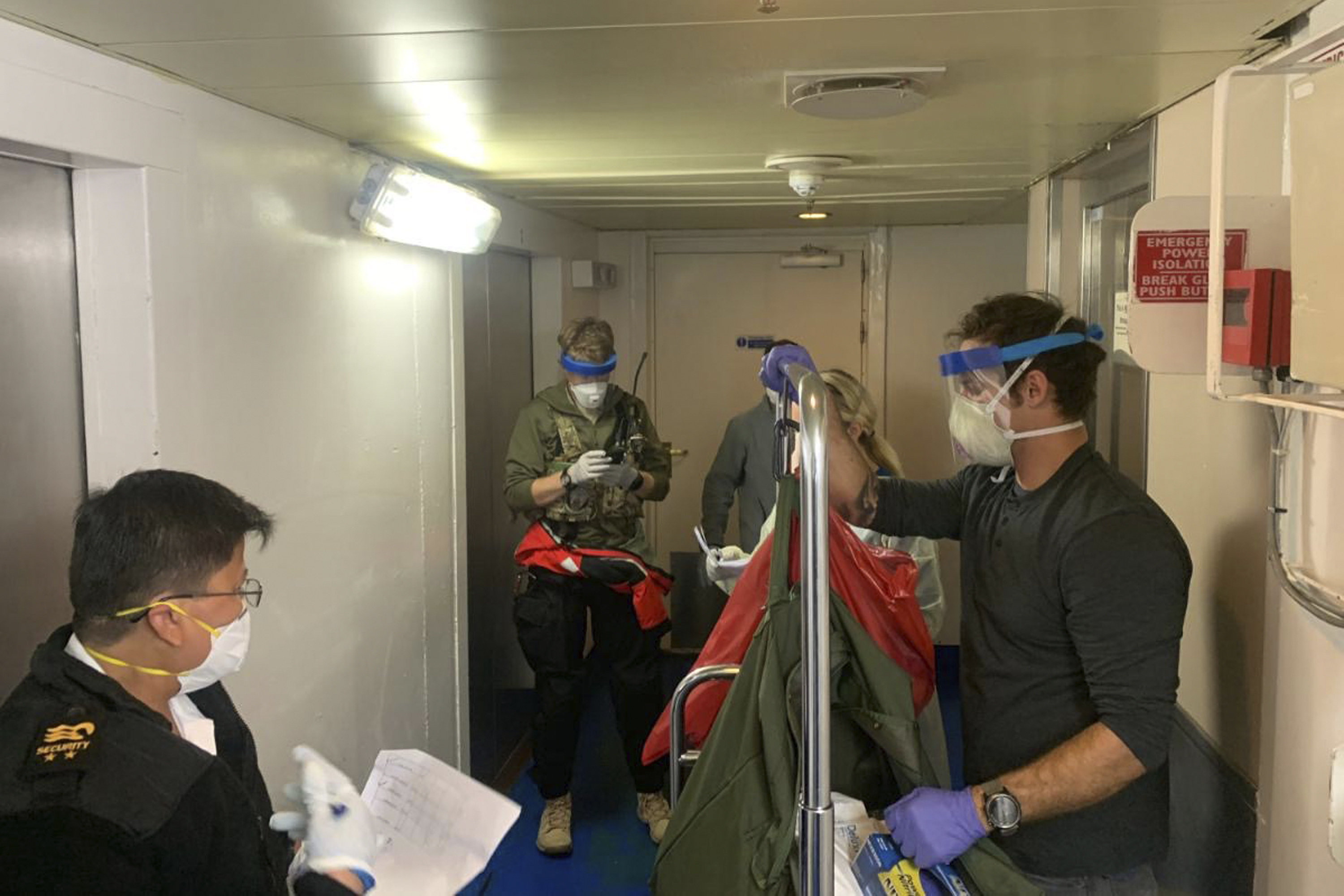 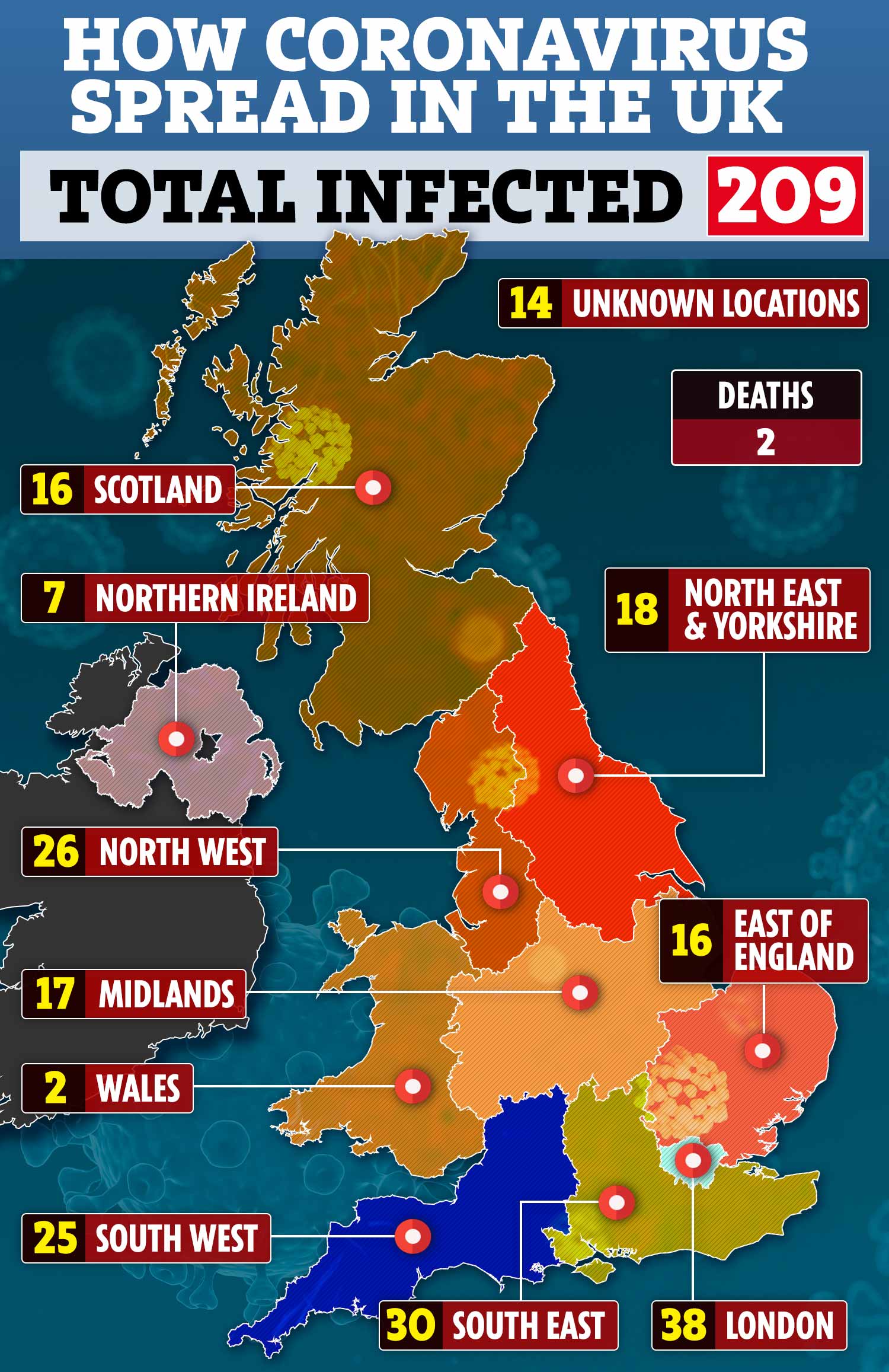 It was being held off the California coast after 21 were found to have Covid-19.

Lisa Egan, whose 90-year-old dad Cliff is on board, said: “I’m worried he won’t survive if he has the virus. Keeping people on board is going to be a death sentence for many.”

She feared a repeat of the situation in Japan on the cruise’s sister ship the Diamond Princess — on which about 700 developed Covid-19 while it was quarantined.

Two British pensioners who got the infection on the Diamond Princess last month still cannot come home because one of them is still testing positive.

Brits on the California vessel said they were confined to their rooms and not being told anything. Jackie Bissell, of Dartford, Kent, said: “We are waiting for the ship's captain but I think he’s as much in the dark as we are.”

The situation on board the Grand Princess is particularly serious for 60-year-old Kari Kostoe, who has stage four cancer.

She and husband Paul, 61, took the cruise as a treat after 18 months of therapy.

But they face being isolated for two weeks — meaning she would miss crucial chemo.

US tourist Kari said: “I’m very at risk for this. Me staying on here for a lot of reasons isn't good.” Brit couple Sharon and Stephen Lane paid £2,800 each to celebrate their 25th wedding anniversary on the cruise, which visited the Hawaiian Islands before being placed on lockdown.

The couple, who even renewed their vows on the luxury vessel, have been boxed up in their cabin since Thursday.

FEAR OF DYING IN QUARANTINE

Foster carer Sharon, 58, fears there may be deaths during the quarantine.

She said: “I’m thinking more and more that this is going to end up like the Diamond Princess with hundreds getting it. There’s definitely a very good chance there could be deaths while we’re in quarantine — most of the passengers are over-70s, so they’re the most vulnerable.

“The longer we’re on here, the more frightened and anxious we’re getting. The staff are all wearing masks and run away when we try to speak to them.”

Coronavirus testing kits were being flown in but Sharon and Stephen, 56, of Hinckley, Leicestershire, are yet to be tested for the infection.

Meanwhile, David and Sally Abel, the pensioners who picked up the infection on board the Japan ship, were told they could not come home after his latest test was positive.

They have been in a Japanese hospital for nearly two weeks in quarantine and developed pneumonia.

The couple have been told they require three negative test results to leave hospital.

David, 74, who has been filming a YouTube video diary of his experiences, said: “Sally is now totally all clear, good to return to the UK.

“But she won’t because I have had a positive. I have now got to go back to square one.”

UK health chiefs have issued fresh advice for the elderly — telling them to stay at home and avoid crowded areas. And a petition by a mum urging the Government to consider shutting schools hit 130,000, meaning Parliament must consider debating it.

The Foreign Office was last night seeking “urgent clarification” after it emerged Brits visiting Russia were being asked to sign a document agreeing to self-isolate for 14 days.

Media reports claimed the UK was on a list of countries deemed to be “high risk” by Moscow.

Elsewhere, there is a ban on travelling in or out of 12 provinces in Italy, which has had 233 deaths.

And the Pope has cancelled his main public appearances and will stream them online instead. 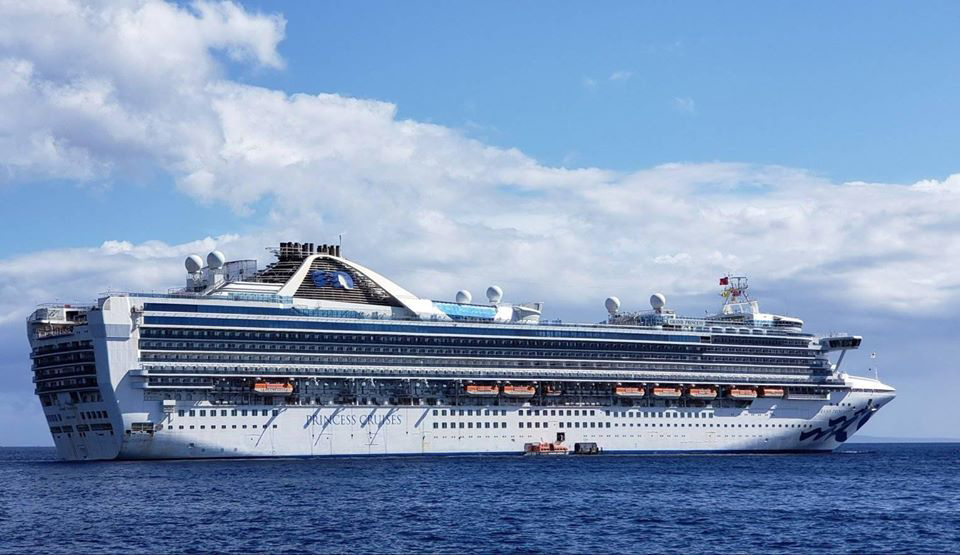 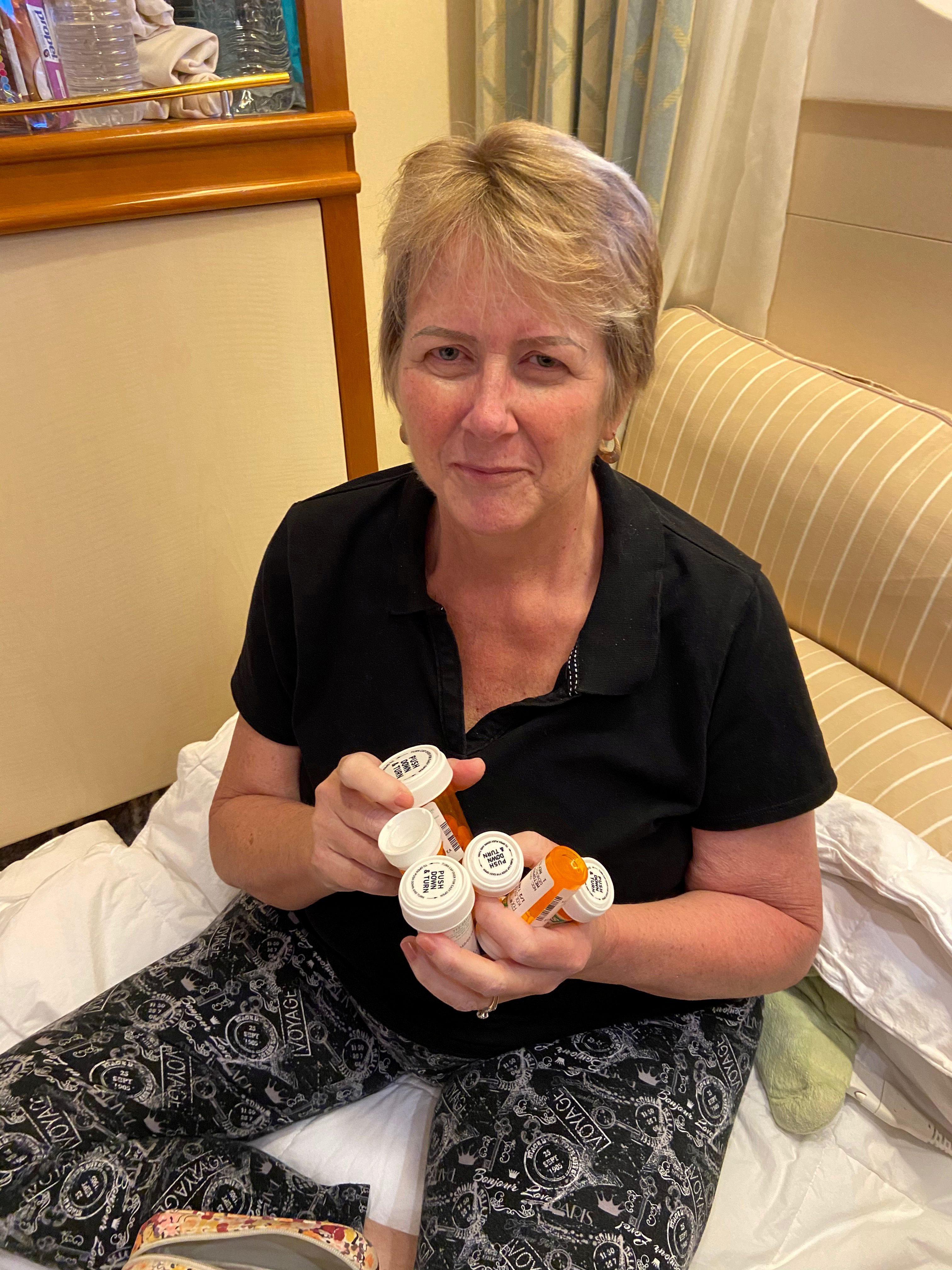 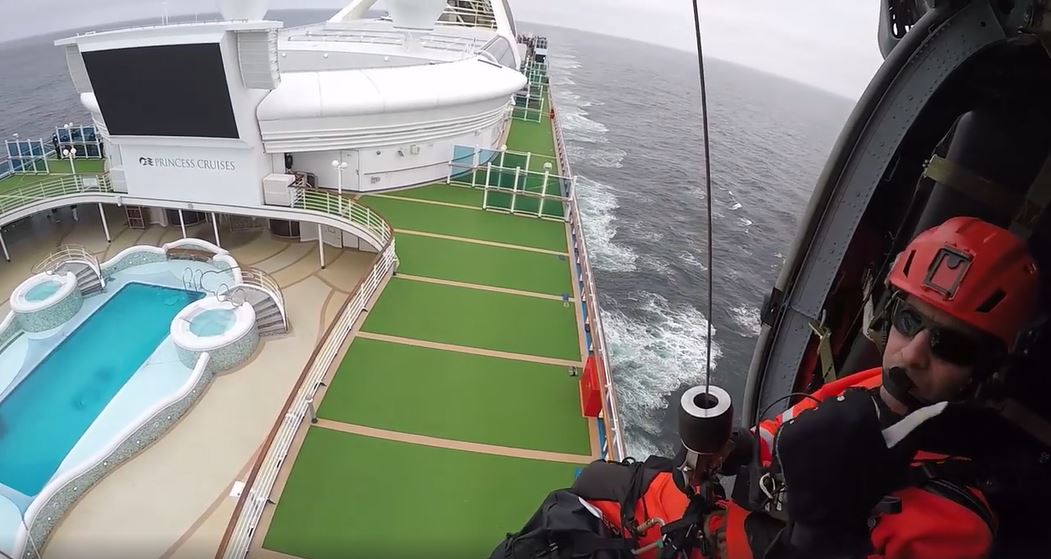 Guide to a virus with deadly aim

WHAT EXACTLY IS CORONAVIRUS? Name given to a family of viruses we have known about since the 1960s. Covid-19, the cause of the current outbreak, is a new strain.

At the virus’s core is a bundle of RNA (ribonucleic acid), one of the two main types of genetic material underpinning all life — the other being DNA.

This is protected by a protein coat assisting the virus’s sole aim — to replicate and pass on its genes. It invades cells of other organisms using tendrils to grasp protein molecules on the cell it is trying to infect.

The tendrils have knobs making the virus look like a crown — corona in Latin,

HOW IS IT PASSED BETWEEN PEOPLE? The virus’s preferred home is mucous membranes of the lungs. Each package of newly-replicated viral RNA is wrapped in a protective coat and passed on — most commonly coughed out as airborne droplets and inhaled by others.

Or it can be transferred by touching a surface on which droplets fell. The virus gets into the body by touching your mouth, nose or eyes. Wash your hands thoroughly and regularly.

HOW DOES IT MAKE US ILL? Covid-19 disrupts respiratory functioning by forcing the infected person’s lung cells to replicate RNA. Lungs get more vulnerable to potentially lethal infections like pneumonia.

WHAT IS THE VIRUS’S ‘AGGRESSIVE’ STRAIN? Viruses mutate. Chinese scientists identified a minor variation of Covid-19, not a new and insidious virus. It seems more infectious but its symptoms do not appear worse than the original.

CAN YOU COMPLETELY PROTECT YOURSELF? No, short of wearing a spacesuit or stopping people near you breathing. But many may build immunity to it, having caught it once.