Father-of-two, 34, nearly died after catching rare flesh-eating bug that turned his hand to ‘mush’ when he cut it while gardening

A green-fingered dad revealed he almost lost his hand to a flesh-eating bug he picked up while doing the gardening.

Steve Palmer, 34, was left with his flesh eaten away to his tendons – after he scratched his hand clearing up the garden and developed the killer bug.

Medics were forced to rebuild his hand using skin pulled down from further up his arm. 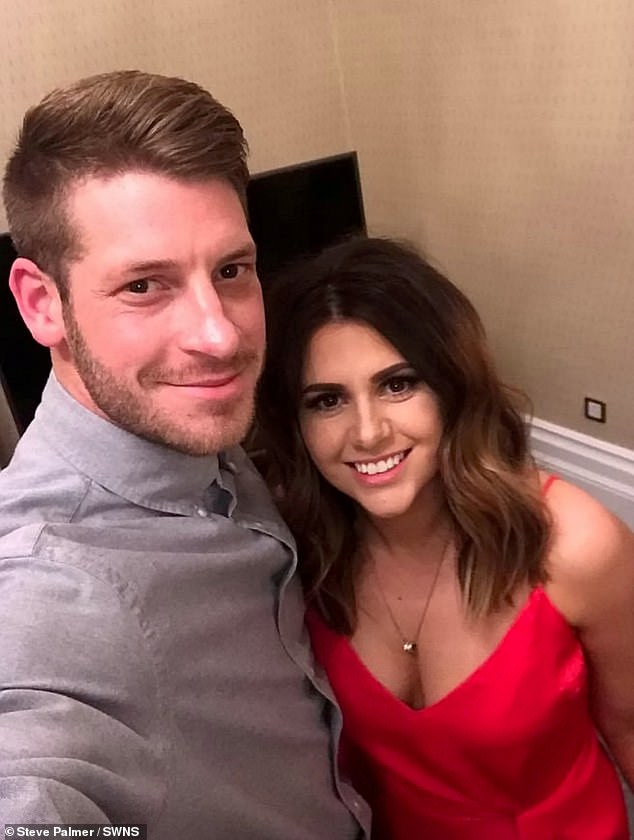 Steve Palmer with his wife Laura. Mr Palmer, an air conditioning engineer, aged 34, suffered a cut to his right hand while gardening

And now safely home in Sutton Coldfield, West Midlands, the air conditioning engineer has spoken out to warn other people to be more careful when pottering around in the garden.

Steve said: ‘I can’t believe something like this could happen from gardening.

‘I’ve never known pain like it, it was excruciating.

‘I had scratched it on the Saturday, by the Sunday morning it was inflamed, and by the afternoon I could no longer move. 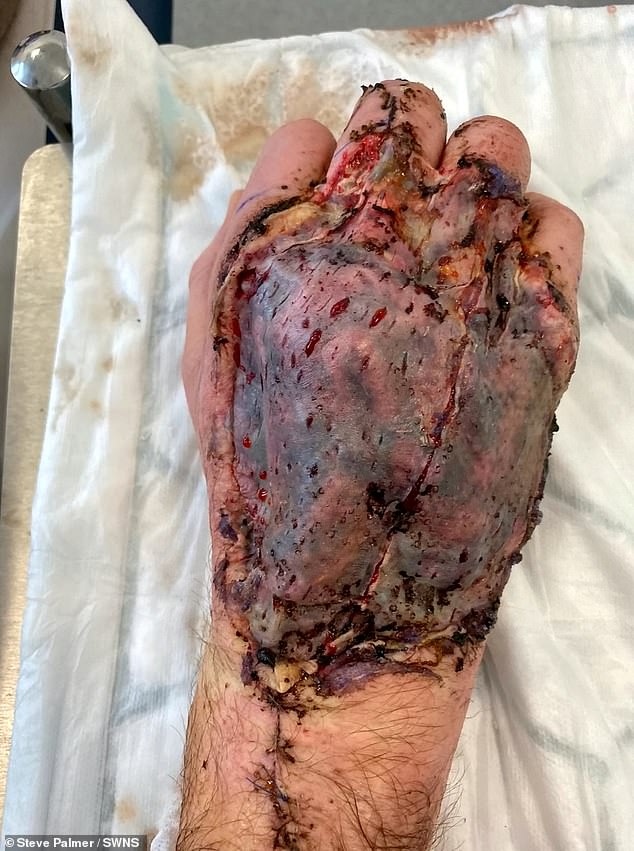 Doctors realised he was suffering from Necrotising Fasciitis, a rare but serious bacterial infection that affects the tissue beneath the skin and surrounding muscles and organs – and acted to save his hand and his life

‘By Sunday evening, the skin was rotting away – I’m lucky to be alive, the doctors told me the mortality rate was 75%.

‘They had to tunnel the flesh from further up my arm and pull it down, just so I could have the skin graft over it.’

Steve had been clearing flood damage to his garden with his wife Laura, and sons Charlie, seven, and Jacob, three, when he suffered a tiny scratch to his hand.

He had thought nothing of it, but by the next morning, Steve was unable to move his finger and by nighttime, was shaking, with fever and stabbing pains. 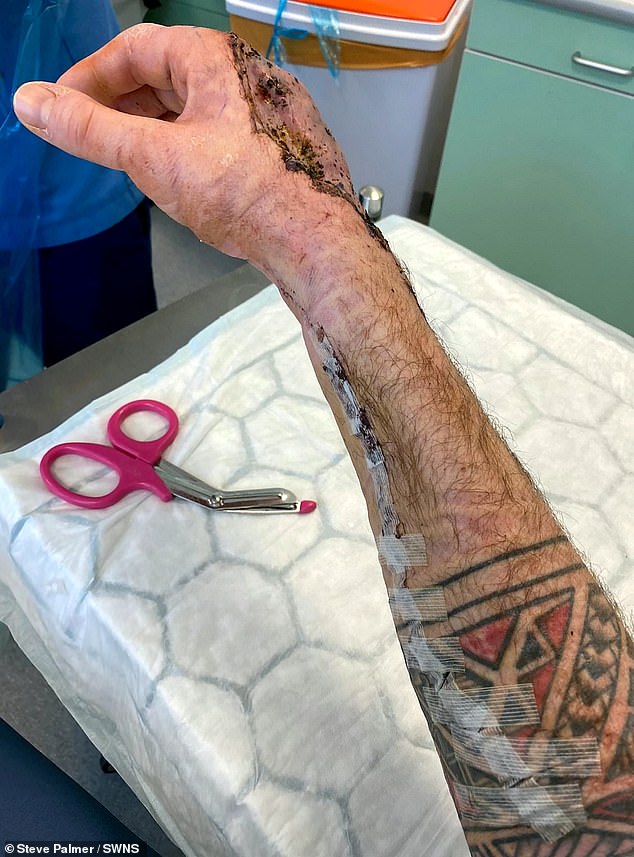 To his horror, he was watching his flesh being eaten away and has since been forced to undergo four surgeries, clearing the wound of infection and having a skin graft from his upper thigh.

Doctors realised he was suffering from Necrotising Fasciitis, a rare but serious bacterial infection that affects the tissue beneath the skin and surrounding muscles and organs – and acted to save his hand and his life.

Steve said: ‘Our home backs onto the river, and after the flooding, it needed a bit of tidying so my wife asked me to do it on the Saturday. 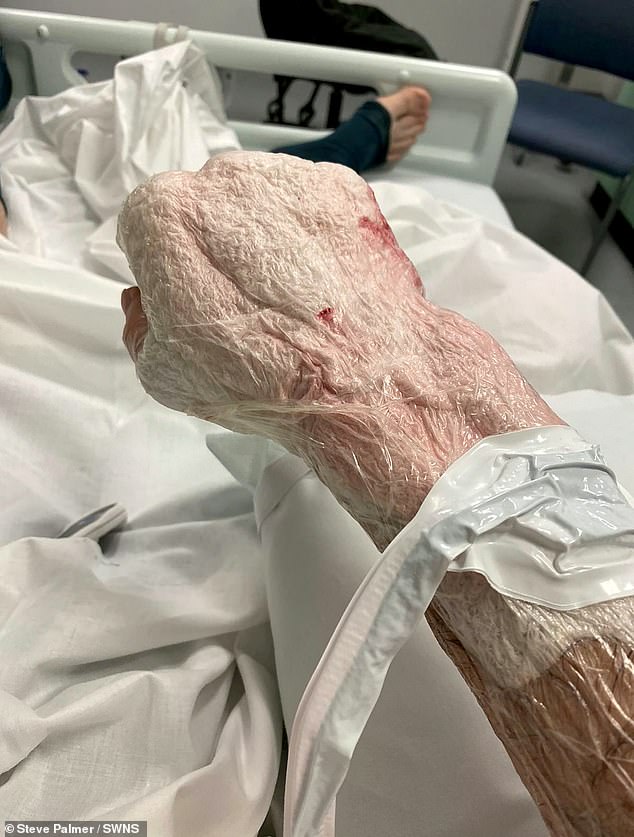 ‘So I was throwing the weeds onto the bonfire, and trying to keep the kids entertained.

‘I noticed a little bit of blood, but I thought nothing of it – it was just a scratch.’

As Steve noticed his finger begin to swell, he put cream and a plaster on in an attempt to stop the inflammation – but when he lost the ability to move it and had a violent fever, he realised it had quickly escalated. 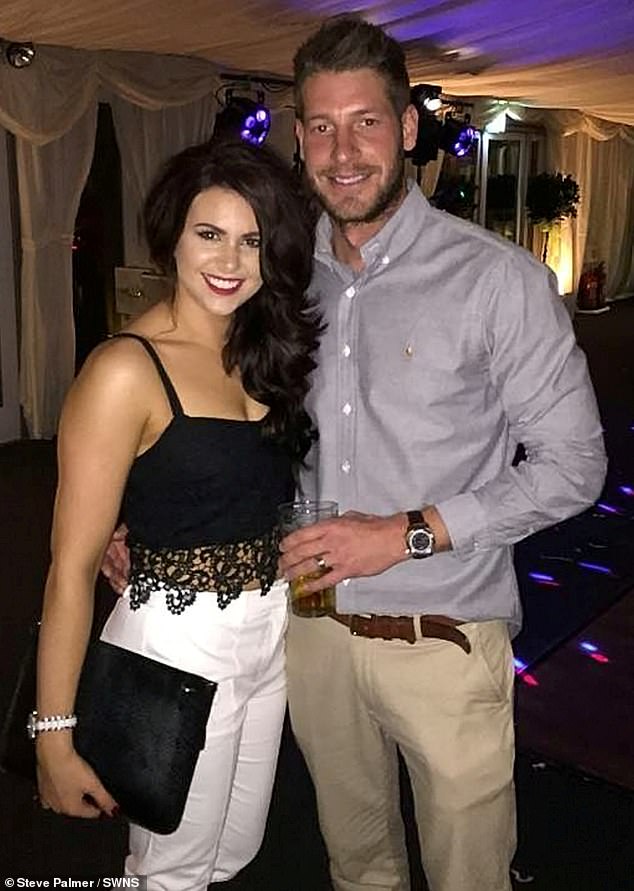 Steve Palmer with wife Laura is now recovering.  He has no feeling in his right hand and all the nerves are damaged

What is Necrotising Fasciitis?

A rare but serious bacterial infection that affects the tissue beneath the skin and surrounding muscles and organs.

The disease progresses very quickly and can lead to serious problems, such as blood poisoning (sepsis) and organ failure.

Early symptoms include a small but painful cut or scratch on the skin, intense pain that’s out of proportion to any damage to the skin, or a high temperature (fever) and other flu-like symptoms.

But as his heart rate quickened and his fever failed to break, he was transferred to Queen Elizabeth Hospital, Birmingham, for specialist care.

Initially treated with antibiotics, Steve’s arm continue to rot – to the point where he could see the infection spreading up his arm.

Steve added, ‘I could see my tendon on my middle finger – the pain was excruciating to the point where I had my head in my elbow.

‘The doctors cleaned out the infection initially but that followed with a four and half hour surgery just to try and get rid of it all.

‘My surgeon had only seen three others case like mine and he said that one in four die as the mortality is so high.

‘When they were able to reconstruct my hand, they tunnelled the flesh from further up my arm, and then pulled it down over my hand and then I had to have a skin graft over it.

‘But I’ve got no feeling in my right hand now, all the nerves are damaged.

‘But now I know, it’s so important – always wear gardening gloves and clean out any scratch – no matter how small.’