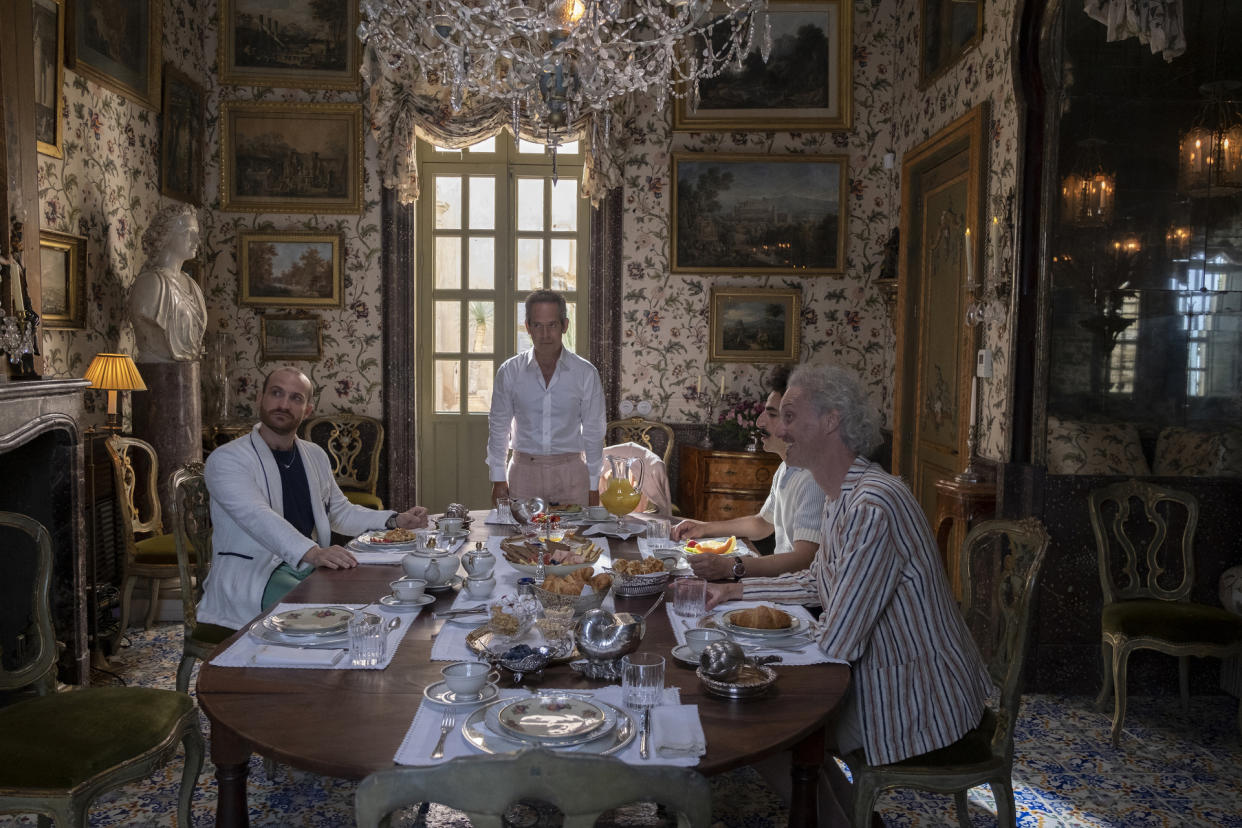 In the wake of the shocking, juicy White Lotus finale on Sunday, social media has been flooded with great memes, mostly featuring the iconic Jennifer Coolidge.

What social media has not been flooded with, however, is outcry about the show’s use of a variety of age-old gay tropes — from the evil queen and the sad/psycho lesbian to the “bury your gays” trope, aka the offing of gay characters, in the end.

Instead, critics have waxed rhapsodic about its “brilliant,” “televisual chef’s kiss” and “sensational second season” (with some pointing out yet other tropes, such as the “hooker with a heart of gold”). They’ve also mourned Tanya and have excitedly looked forward to another season, hopefully with more Portia outfits to laugh at.

And though such well-worn LGBTQ plot points have riled critics in the very recent past — including with Killing Eve and House of the Dragon, both called out for the “bury your gays” trope — barely anyone seemed triggered by White Lotus. Perhaps it’s because they were prepped by Season 1’s finale, which saw Armond (Murray Bartlett), as the “depraved gay,” also killed off, prompting just the slightest bit of outcry on the Reddit thread called “a cliché trope that needs to die.”

Similarly, the criticism is muted this time around. Over on Twitter, “brown queer artist/activist” and filmmaker Leo Herrera invited his combined 35,000-plus followers to “talk about the use of gay tropes” on the series recently, getting not much traction.

Lets talk about the use of Gay Tropes in #WhiteLotuspic.twitter.com/0srwBilWqB

“I really don’t want to be a grinch about it, because I really enjoyed the show,” Herrera tells Yahoo Entertainment. “But I’m … a little surprised that there wasn’t more discourse about this.”

Further, he says, “I don’t want to be the ‘angry brown guy’ … but something we need to be aware of is that some of these gay white show-runners may believe we are past certain stereotypes or tropes — which brings up issues of race and privilege.” 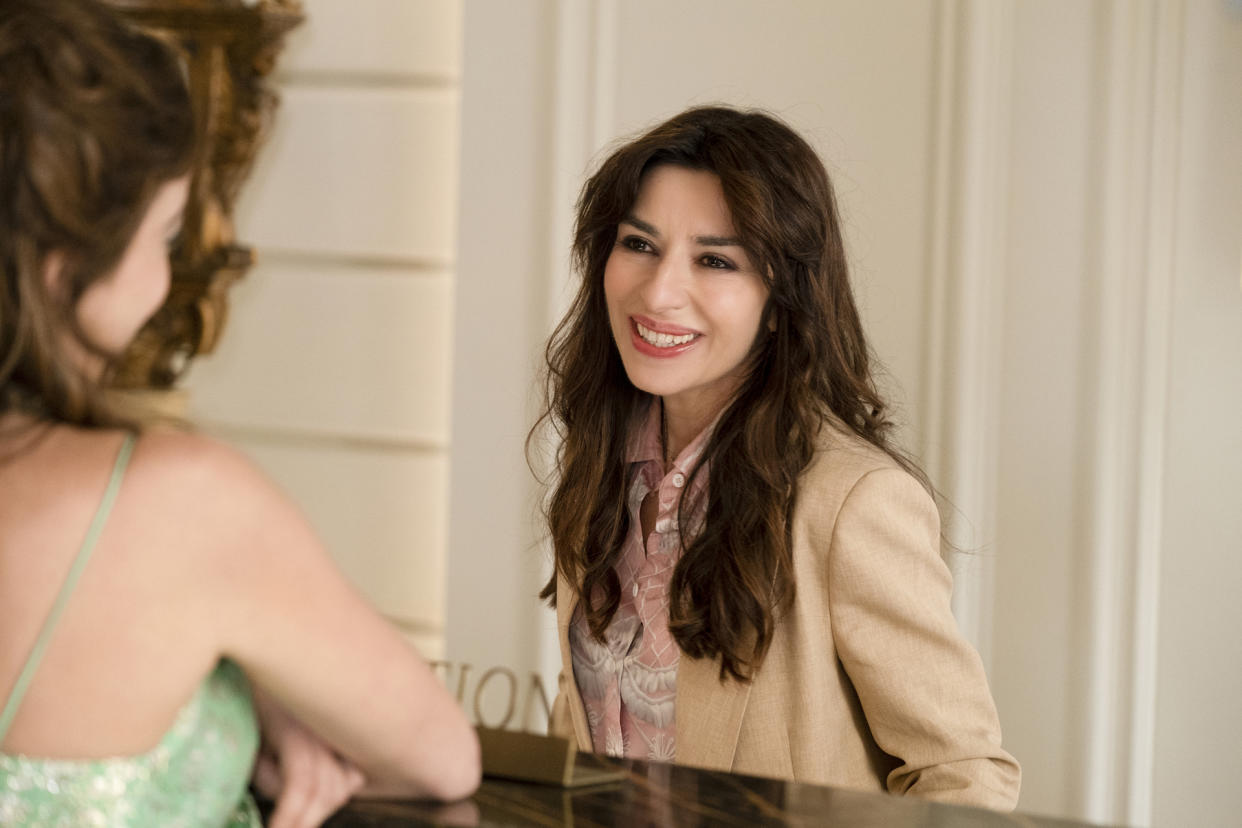 On Facebook, a few of this writer’s acquaintances sounded off, with one calling White a “lazy writer,” adding, “it’s gross to portray gay men as predators, addicts, transgressive and dirty before killing them. It’s typical old textbook Hollywood to kill off the morally corrupt gay characters, if you know your cinema history … yet BOTH SEASONS of White Lotus rely on the tired old trope.”

Over on a White LotusReddit thread, meanwhile, one viewer wondered, “What gay men f***ed with Mike White for him to always make them tragic, vicious, and stereotypical?” That prompted a few to agree, including one who noted, “The thing is gay villains is actually a thing … We still want representation so of course it’s a double-edged sword and impossible to please the entire audience.” But most come to White’s defense.

First, some background on gay tropes

GLAAD calls gay tropes “harmful and tired,” and the recent examples have helped refuel old anger about how LGBTQ characters are so often killed off in TV dramas — a tradition actually stemming from the 1934-1968 Motion Picture Production Code, aka the Hays Code, a set of self-imposed industry guidelines that banned (along with nudity, lustful kissing and more) onscreen homosexual depictions. That prompted filmmakers to skirt the rules by making sure any even vaguely gay characters were tragic, lonely, doomed or evil.

The topic was explored in depth in the 1996 documentary The Celluloid Closet, based on the landmark book by Vito Russo. And, noted a 2017 Advocate article, “While the code was done away with in 1968, its shorthand persists in film and television in the form of tropes that are dangerous for representation, like the compulsory killing off of queer characters, the depraved or promiscuous bisexual, the sissy villain, and the worst of all — complete erasure of queer existence.”

“I think the thing that’s the problem about tropes is if they’re the only things out there,” Cathy Renna, director of communications for the National LGBTQ Task Force, tells Yahoo Entertainment. “But like every other subset of people, as we begin to be represented in a more diverse, broad fashion, they become … well, OK, some queer people are like that,” stressing that the murderous, yacht-owning Quentin is of course an entertaining dramatization.

But Renna, a longtime publicist in the queer community, shares a “vivid memory” of discussing the new show Will & Grace with a reporter who was put off by the swishy character of Jack. “I said, you know, if you talk to 10 gay men and ask what they think, three will love him, three will hate him and four will be just like him,” she recalls. “Stereotypes exist for a reason.”

Now, in 2022, “we live in a culture where people look [at gay White Lotus characters] and shrug … People are not taking it as an offense. It’s campy.” But again, she adds, “if that were all that’s on TV, it would be more of a problem.”

Mike White (who was unavailable to speak with Yahoo Entertainment) acknowledged his own use of tropes in a Q&A for the media provided by the show’s publicist. “There’s a trend in cultural criticism right now about tropes being inherently negative,” he said. “‘Stay away from this, it’s problematic because it’s an old trope.’ As a creative person, if I tried to create something that was completely free of problematic tropes, I don’t know what I would write. [Laughs] I thought, ‘Let’s embrace classic tropes, but with a twist.’”

Further, White, who is bisexual and whose father is a gay activist, touched upon it again with Terri Gross on NPR recently, telling her, “this whole season of the show is … going into a certain, like, constellation of tropes and try to, like, play with those tropes in a way that hopefully feels fresh.”

Why fans have White’s back

It seems that he’s pulled it off — or at least gotten a pass. On that Reddit thread, notes one commenter, “I’m pretty sure mike white is bisexual, and his father is gay. So, i think he is doing it with sensitivity in mind…”

Writer, culture critic, podcast host and White Lotus enthusiast Evan Ross Katz, meanwhile, embraced every storyline and tells Yahoo Entertainment he “wasn’t bothered” by any of the tropes when pointed out to him.

“I couldn’t be bothered by anything Mike White would ever do. I just trust in his voice and his vision and his ability to execute his vision,” Katz, 33, says. “I did not observe any of those tropes, at least not anything I was conscious of, because … there were so many new versions of things I’d never seen explored in TV or cinema in regards to queerness. These ‘evil gays,’ as they’ve been called, I’ve never really seen that explored.”

Regarding the “bury your gays” trope, Katz believes the way White handled it was “a subversion.”

“You had this incredibly loved queer figure [Tanya] who’s the one burying the gays — and in this instance, the gays are evil. They are literally murderous! So we had to sacrifice the gays in order to keep the queen of the gays.” He even questions the modern existence of the “bury your gays” trope.

“I think it’s a wonderful we can have gay people die on White Lotus. … They’re evil, and gay people should be able to die,” he explains. “The idea of ‘bury your gays’ was when we get a seat at the table it was suddenly taken. But nowadays, sure, Quentin dies. But Valentina lived.”

As for Coolidge’s part, when asked by Variety, “How does it feel to be a gay icon who ends up murdering a bunch of ‘high-end gays’ who plotted to kill her?” she said, “Gay men can be catty, but mostly they are the good guys in a lot of films that I’ve seen. But Mike White made these guys kind of wicked, very corrupt soulless guys. He told me, ‘You end up getting taken in by this group of — well, let’s just say they’re evil gays.’ I just got so riveted, I was so enthralled. You know, Tanya’s not onto them, but she’s finally being appreciated and she’s finally having a good time on this horrific trip.”

“I worked at an LGBTQ magazine in NYC for 24 years, came of age growing up on a small farm in Pennsylvania — and also during the AIDS epidemic and Reagan — moved to NYC at the age of 26, devoured any/all films dealing with gay depictions/expression, and bore witness to the inclusion of LGBTQ characters in mainstream television and film. And with White Lotus, and under Mike White’s depiction of the best/worst of all his characters, the tropes just didn’t anger me,” he tells Yahoo Entertainment. “That being said, I’d love to see a future season where an LGBTQIA character serves as the moral compass amidst a cast of broken players.”

Herrera tells Yahoo Entertainment that he believe the lack of outcry — and overwhelming support for the show, from all corners — “speaks to the quality of the show.”

He continues, “The show is so good, and we get caught up in our soap operas and set our guard down … to some of the nuanced conversations. We can make these [tropes] our own, but we just have to be really aware of their previous existence, and examine where they fit into the current media landscape.”

Further, he acknowledges that audience perspective matters greatly. “A gay villain and a sad lesbian is going to hit very differently for an older queer, a younger queer, an older straight person. … Younger gay people may not be aware of those tropes at all — and older gays may not want to complain anymore, and just be happy to have something juicy to watch.”