MINNEAPOLIS — Christyn Williams put into words what most were thinking late Monday night after Connecticut slipped into its 14th consecutive Final Four in a double-overtime thriller.

“Literally I was thinking, we have Paige Bueckers and they don’t,” UConn’s senior guard said, a play on head coach Geno Auriemma’s “we have Diana Taurasi and you don’t” quip two decades ago.

A back-to-form Bueckers was the difference-maker for the Huskies in those extra two periods to outlast NC State and preserve the program’s historic streak. And while she is far and away the most clutch player of this tournament, every team here in Minneapolis has a game changer who turned it up these last three weeks.

Bueckers, Stanford senior Lexie Hull, Louisville trash-talking guard Hailey Van Lith and South Carolina forward Aliyah Boston, the newly named Naismith Player of the Year, have the ability to change the momentum of the game. How they go goes their team and national title hopes.

“Without a performance like [Bueckers], there is no next weekend,” Auriemma said earlier this week. “No matter how good the rest of your team is, [it] doesn't matter. Next weekend is the same thing. There's four teams out there, but there's three or four kids that they're going to decide who wins the national championship.”

UConn (29-5) and defending champion Stanford (32-3) will face off in the second Final Four game on Friday from Target Center in Minneapolis (9:30 p.m. ET on ESPN). The Huskies defeated Stanford in the semifinal of the 1995 tournament en route to their first of 11 championships. Stanford is seeking to be the first back-to-back winner since UConn’s four-year run in the mid-2000s.

Louisville (29-4) and South Carolina (33-2), the betting favorite and No. 1-ranked team all season, will tip things off at 7 p.m. ET on ESPN. Louisville has two championship game appearances, but has never won a title. The Gamecocks want to add another to their 2017 trophy.

Here are the four stars who led their teams to Minneapolis. 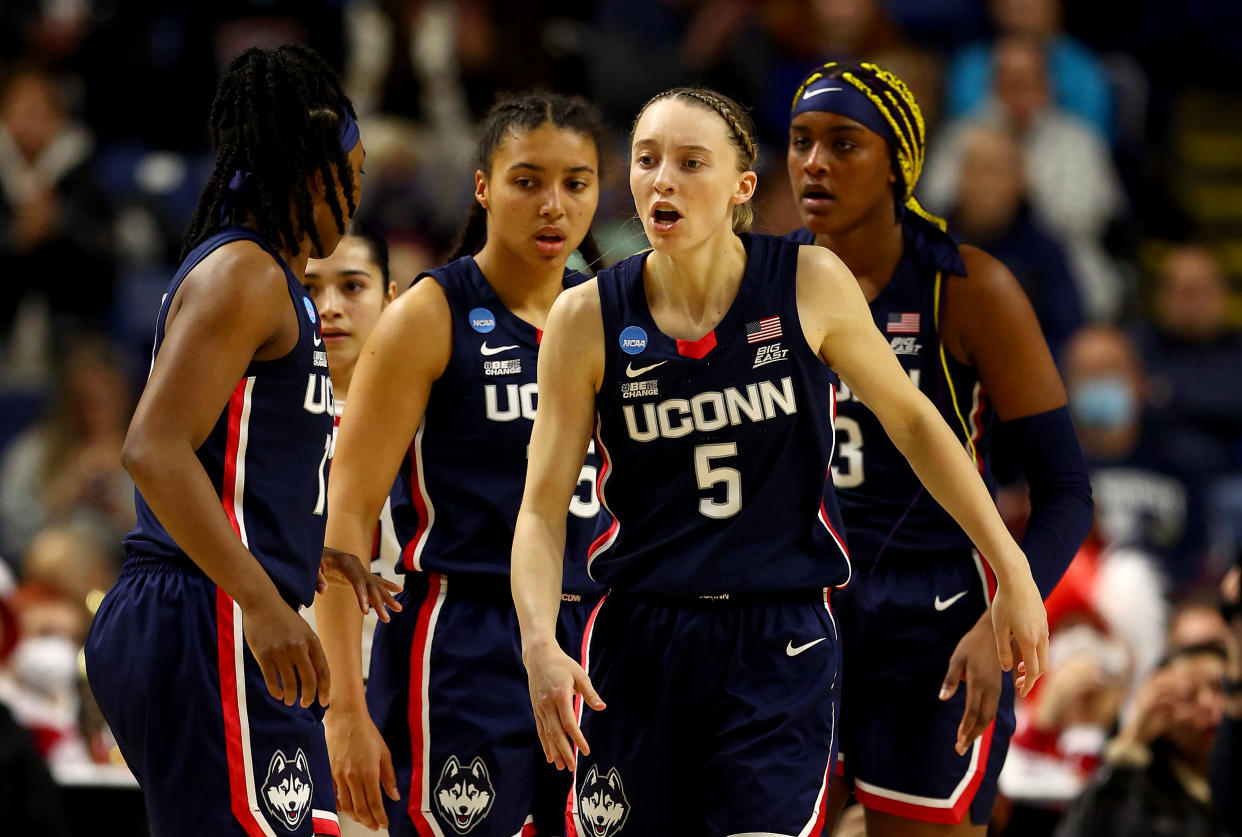 Bueckers is still not 100% after undergoing leg surgery in December and missing two months of game action. But the Huskies will still take the 2021 Naismith Player of the Year at less than that. When their backs are against the wall, Bueckers can turn on the clutch gene like no one else.

“Once she makes one, the rim is like this big,” Williams said after the Elite Eight win. “She's just going to keep making them. So just keep giving her the ball.”

Bueckers’ 27 points were second only to her 34 against Arkansas to start the season. After scoring only four in the first half, she poured in 10 in the first overtime and five more in the second. It was another big-minutes game for her after not playing more than 18 minutes in each of her first four games back during the regular season and Big East tournament.

UConn and Stanford players spoke of defense being the key to Friday night’s game, but when Bueckers is on fire, it’s tough to do anything to stop her. She can pull up and hit mid-range jumpers and 3-pointers with ease amid ear-piercing roars. And much like the Elite Eight game in their backyard, UConn is again playing with a home-court advantage. Bueckers grew up in Hopkins, Minnesota, less than 10 minutes west of Target Center.

Stanford head coach Tara VanDerveer described Bueckers on Thursday as multidimensional and not a “one-trick pony,” a remark to which her players agreed.

“Paige has a lot of things up her sleeve,” Lexie Hull said. “[We’ll] try not to let her do what she wants to do on Friday.”

The Huskies will need just as much from Bueckers if not more given a lack of depth in the post following Dorka Juhász's wrist injury. No one has shown they can step into that pressure role more than Bueckers.

“Paige is different,” Auriemma said. “Those players, if they were commonplace, we would know exactly who they are and we'd be able to rattle them off, but they're not. They're few and far in between, and she was made for these moments.” 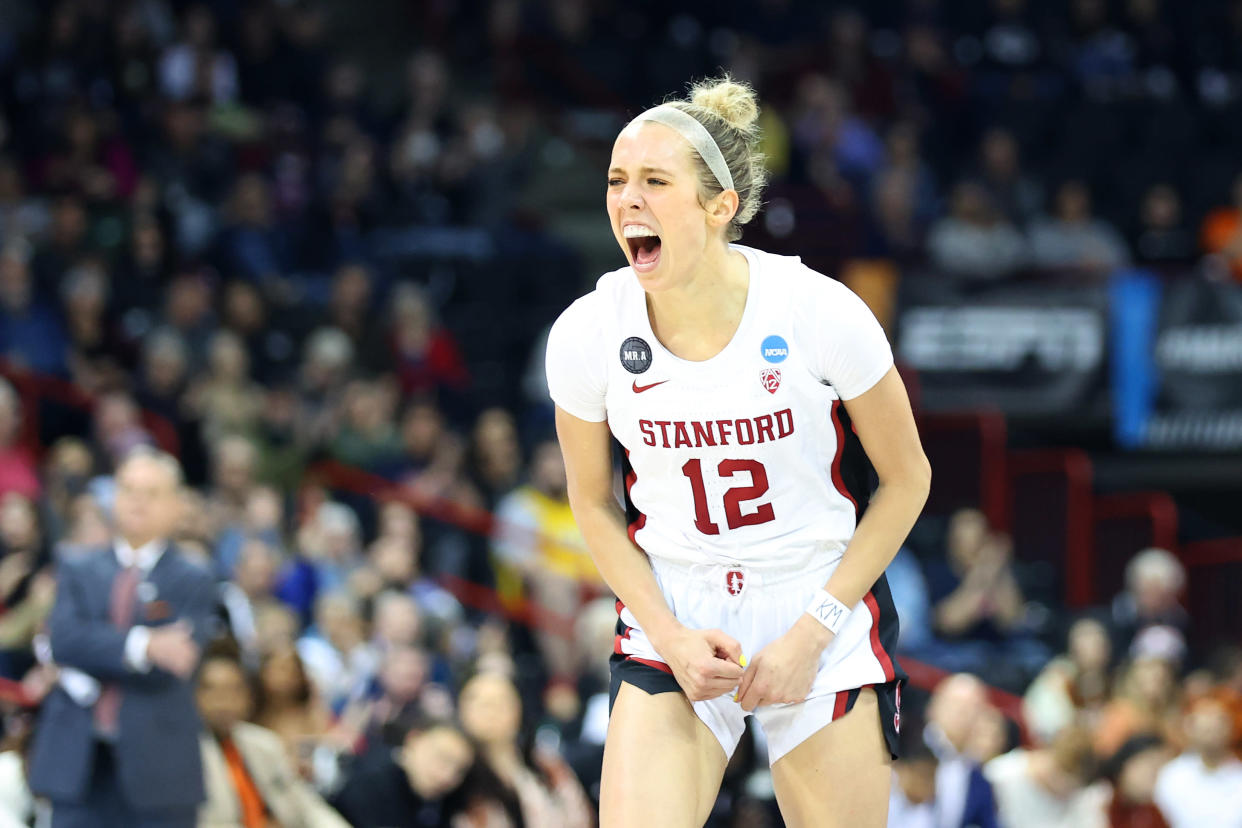 This Cardinal team is a symphony with a different soloist each night, as VanDerveer likes to say. Five players have been high scorers in single games, six have led in rebounding and seven had taken the lead on assists. But it is Lexie Hull who has stood up tallest night in and night out during the NCAA tournament.

The 6-foot-1 senior guard led Stanford in each of its past three games, scoring 36 in the second round against Kansas, 19 in the Sweet 16 against Maryland and 20 in the Elite Eight against Texas. She led two games in rebounding and two in assists to average 22 points, 5.3 rebounds and 3.3 assists over four games.

“She'll get on the floor for the ball, she's scrappy [and] she plays with great intensity,” VanDerveer said early in the week. “I think it just goes back to the twins playing in their driveway. One of them would come in bloodied and crying because the other one won. But she has no quit in her. She's really playing great, getting out — she works at every aspect of the game. She rebounds, she plays defense and she's scoring.”

Playing the hot hand is much like riding a hot streak as a team into a tournament (outside of Kentucky, it appears). It’s a great thing. There are so many options to guard for the Cardinal that Hull has broken out and taken her opportunity.

Outside of Kiana Williams, who was drafted by the Seattle Storm last April, this is the exact team that won the 2021 title, and Lexie Hull credits that chemistry for being even better a year later.

“We’ve just grown closer, and we love playing together even more than we did last year,” she said. “That’s hard to believe. But yeah, I think that’s just the extra time, the extra year, and the extra year of playing has helped us get better.”

Stanford is on a 24-game winning streak that dates back to a Dec. 21 loss to South Carolina. 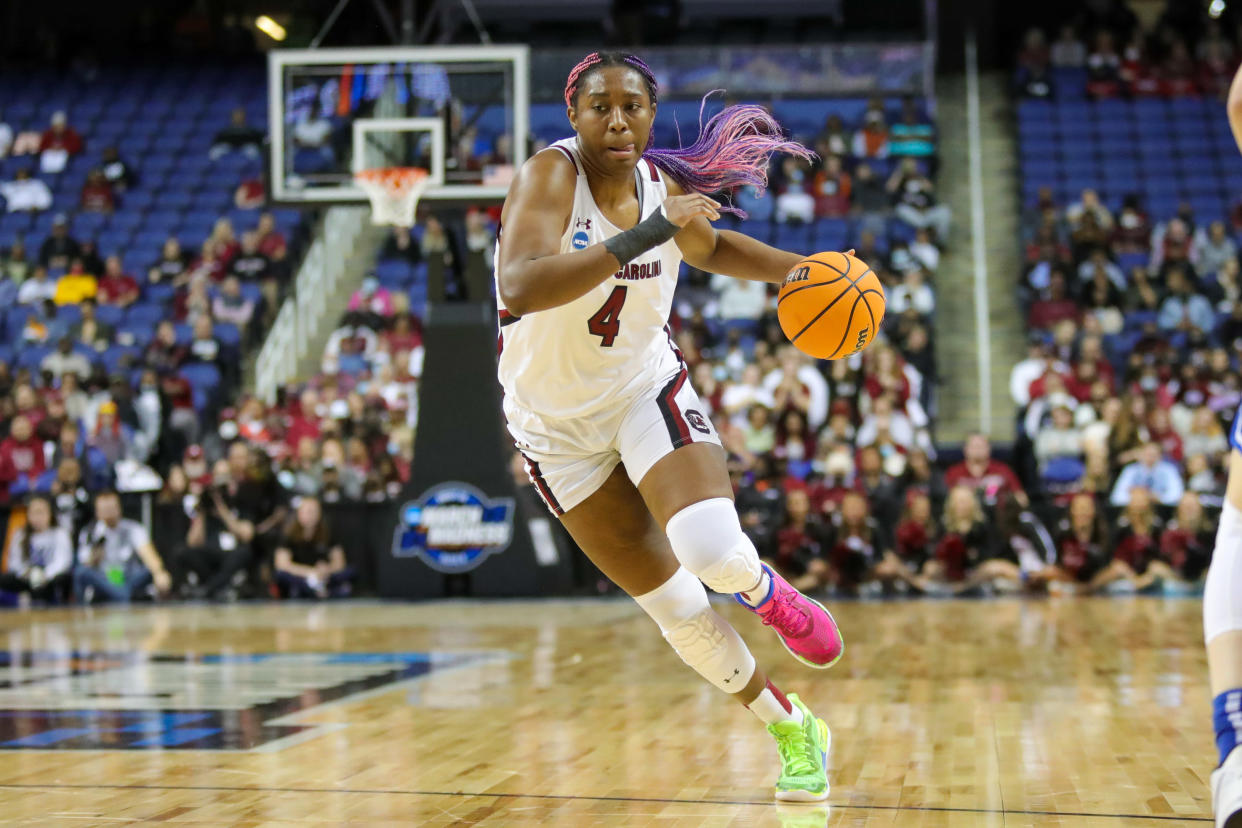 Aliyah Boston swept all major national player of the year awards and the South Carolina Gamecocks had a clean sweep of the Naismith awards. Boston was named the Naismith Defensive Player of the Year and Dawn Staley brought in her second Coach of the Year award that she made sure to also credit to her staff and team.

Boston has been the clear front-runner all season for her efforts on both ends of the court. She is a dominant center who has scored through triple-teams this tournament, including a dazzling 28-point, 22-rebound performance against North Carolina’s fourth-ranked defense. And even in a bad outing, the junior did enough to lift the sluggish Gamecocks offense to a win against Miami.

“We know we're going to have to make sure we're focused on her and know where she is at all times, but she's also got pretty good teammates she's playing with,” Louisville coach Jeff Walz said. “So we'll have a plan for tomorrow night, and then if Plan A doesn't work, we'll go to Plan B, and then Plan C if needed, and there is no Plan D.

For the season, Boston leads in win shares (16.0) by a large margin over Baylor's NaLyssa Smith (12.8), thanks to improvements on both offense and defense, via Her Hoop Stats. She’s averaging 16.8 points and 12.2 rebounds and produced two of her most efficient games against the Tar Heels and Creighton.

The last thing on her goals list, after bringing that trophy back to the hotel on Wednesday, is a national championship. If the South Carolina guards go quiet against Louisville’s suffocating pressure, it will be up to Boston to carry the load. It’s not anything she isn’t used to handling when needed. 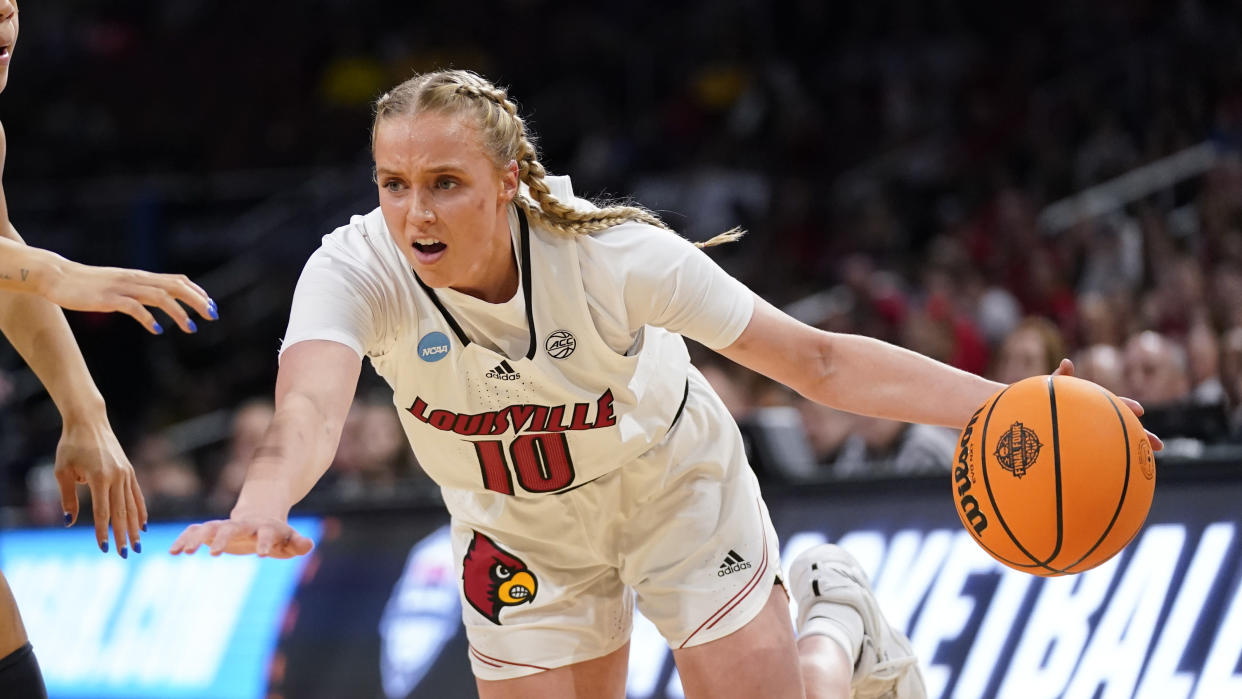 Van Lith, a point guard in the same class as Bueckers and Iowa’s Caitlin Clark, is in elite company with her NCAA tournament performance to this point. She is one of five players over the past 15 years to score at least 20 points in each of the four games, joining Notre Dame’s Arike Ogunbowale (now with the WNBA’s Dallas Wings), Washington’s Kelsey Plum (Aces), Syracuse’s Alexis Peterson and Stanford’s Chiney Ogwumike (Sparks).

Van Lith will say whatever she feels — sorry, Jimmy Fallon and Barack Obama — and can take contact at the basket. Walz credited the work she put in before stepping onto Louisville’s campus for her strength as a 5-foot-7 guard.

“That's one of the things when you get to this level of playing against other great players, you can't be just one-handed. You've got to be able to use both, and she does that,” Walz told reporters on Tuesday. “She's able to shoot a little bit of a fadeaway at times when she needs to get a shot up over the defender.

“But the bottom line is she's trained so hard ever since she was in high school. When she got here as a freshman, her freshman summer, she's one of the few freshmen we've had that's ever passed our conditioning test the first time she did it, and that's because of the training that she did before she got here. That's in the weight room, the cardio. Because of that, she wasn't a year behind in the physical training. She's just continuing to get stronger, and that's why she's able to finish with contact even at her size.”

Van Lith’s supporting cast includes Syracuse transfer Emily Engstler, a stat-packing wing who doesn’t need a big scoring night to be the force Louisville needs on both ends of the court. Which is good, because this one isn’t likely to be a high-scoring affair. South Carolina (50.5 ppg) and Louisville (55.2 ppg) use their defense to power offense.

“It is going to be an elite guard matchup,” Van Lith told reporters on Thursday, “but I think it's going to be who's the mentally toughest to fight through the fact that these are both elite defenses and not get in their feelings about what's happening on the offensive end. For us and our guards, if we shoot great, amazing. But if we don't, we're going to go defend and make sure they don't score, either.”

The Cardinals have the shooting edge on South Carolina and that has been fueled by Van Lith.