‘This was predictable’: GMB’s Dr Hilary Jones says UK is on ‘same trajectory as Italy’ with 827 coronavirus deaths so far and Boris Johnson ‘should have banned mass gatherings a week ago’

Good Morning Britain’s resident doctor has today claimed that the spread of the coronavirus was ‘predictable’ and said the government should have ‘banned mass gatherings’ a week ago.

Dr Hilary Jones this morning said the UK is on the same trajectory as Italy as the government prepares to move from the contain phase to the delay phase.

Speaking on Good Morning Britain Dr Hilary said: ‘Well I think this was predictable. We were always running containment and delay concurrently in reality, we always knew numbers were going to increase probably double every three to four days. 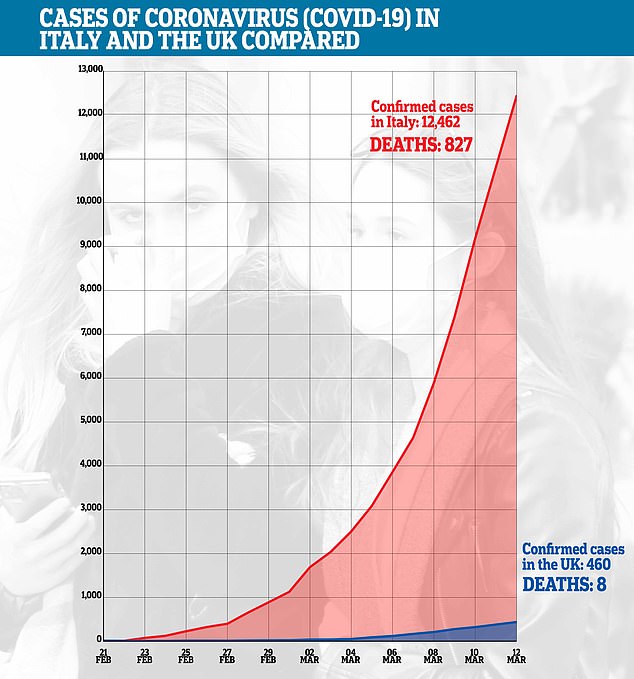 ‘We are on the same trajectory as Italy, if you look at the Italian situation overnight two hundred deaths nearly, so clearly this is very serious.

‘Having said that the delay phase is critical, people need to socially distance, we should have banned these mass gatherings probably a week ago’.

He added that he didn’t think the Cheltenham Festival should have gone ahead.

Total confirmed infections in Europe have risen to 23,339 with 951 deaths, according to a new tally which is compiled from official sources.

Italy has said all shops except pharmacies and food outlets will be closed in response to the country’s coronavirus outbreak.

The World Health Organisation’s designation of the killer coronavirus as a pandemic has propelled several Governments – in the US, Denmark, and the UK – to take action to mitigate against its continued spread.

Advice on how people should keep their distance from one another will be issued by the UK Government today after PM Johnson rubber-stamps the formal shift from ‘containing’ to ‘delaying’ the coronavirus.

People can expect guidance on what measures to take to reduce the risk of contracting the bug.

PM Johnson is expected to meet with Labour figures today to discuss the planned emergency laws. Measures could include giving the state power to restrict people’s movements, and to bring back retired GPs and nurses.

According to the Government’s published action plan, the restrictions would have ‘social costs’.

‘Some of these will have social costs where the benefit of doing them to delay the peak will need to be considered against the social impact,’ said the Government’s action plan.

Prime Minister Giuseppe Conte announced the latest wave of restrictions in a dramatic appeal to the nation that came as the country of 60 million battles its biggest crisis in generations.

Speaking about schools and public transport and schools, he said children were relatively protected from the disease.

‘It’s very rare for children under ten to get any serious complications or symptoms from the virus, but of course they can transmit the virus possibly, they are super spreaders sometimes of usual viruses like flu viruses.

‘In terms of public transport I think people need to start thinking about distancing themselves as much as possible. Crowded tubes, I think that is a potential risk, particularly if you are changing different carriages.

‘Experts have said you are only in fleeting contact with other people but it doesn’t take very long to contract the virus.’

He added that the idea of socially distancing was arbitrary and said that this might not protect people from contracting the disease.

‘People need to be aware of stringent hygiene, avoiding people with symptoms of coughing.

‘The important thing to realise is that the virus does not produce a runny nose, it’s a dry cough and we have to stop people calling 111 with any little cough of sniffle.

Celebrity chef Aldo Zilli also appeared on the show to discuss the impact the virus was having on the entertainment industry.

He said restaurants in the north were not suffering but that the six in London were starting to suffer a little bit. 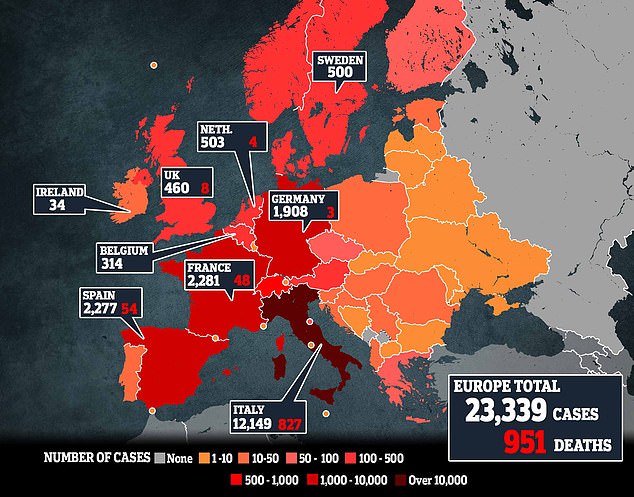 ‘We are doing everything we can to accommodate and for us the most important this is customers first. The cleanliness of the restaurants have been stepped up’.

Zilli has family in Italy and said his brothers are locked in, he added that some supermarkets are still open but they are unable to go to bars.

‘Italians don’t like being told what to do and it’s a given that this had to happen’.

Susanna reiterated that the UK was on the same trajectory as Italy and questioned whether or not people’s behaviours were having an impact on the spread of the virus.

Dr Hilary said this was compromising health and that it was a worry that people who are self employed have said they cannot afford to self isolate. 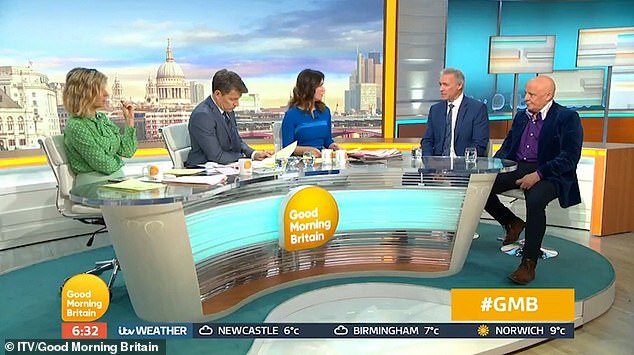 ‘The rationale about having not put in draconian measures before is that if you isolate people on mass too quickly then people get isolation fatigue and they say nothing has happened in two weeks there aren’t many cases out there I’m going to abandon this and go back to work and do all the things I used to do and then you just delay the peak.

‘This is about delay, it’s about reducing the spike that we will get in cases that could overwhelm the NHS in five minutes.’