‘There’s no getting rid of me’: Grandmother, 93, records heartwarming message from coronavirus lockdown to reassure her grandchildren she is fighting fit – and remind them to do as they are told

A 93-year-old grandmother has told her grandchildren ‘there’s not getting rid of me’ in a heartwarming video during the coronavirus lockdown.

‘I’ll tell you I’m like a bad penny, there’s no getting rid of me.

She added: ‘I hope you’re keeping well and doing what you’re told. Keep to the rules and you will all be fine – it will pass.’

Another said: ‘Can we please get updates from #WeeGranny like, daily?! She legit made me feel better than anyone yet in this catastrophe. Go Granny!!’

One wrote: ‘Is it okay to pretend she was speaking to us all?

‘Hope you get to hug her again soon.’

The feel-good film has been viewed over three million times by scores of Britons confined to their homes during the lockdown.

It comes as another 563 people who tested positive for the coronavirus died today – the worst day so far in the ongoing pandemic crisis. 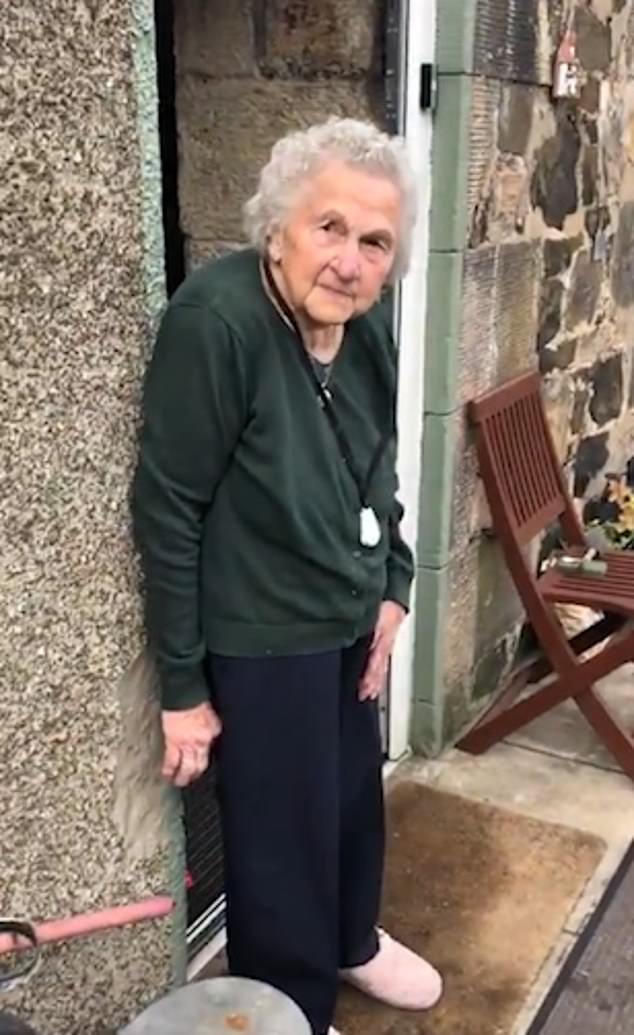 Twitter users rejoiced after the video of the Scottish grandmother was published yesterday, with one person saying: ‘Twitter just adopted “Granny Scotland”‘

The increase takes the country’s total death toll to 2,352. Today’s surge is 48 percent larger than yesterday’s increase of 381 fatalities.

It pushes the total up by 31 percent in a single day.

And 29,474 people have now tested positive for COVID-19. The UK is the fifth hardest-hit nation in Europe and eighth in the world.

Wales today recorded 29 new deaths caused by the coronavirus along with a further 16 fatalities in Scotland and two in Northern Ireland. 486 victims were declared in England and 11 remain unaccounted for.

The youngest patient announced today was a 13-year-old, believed to be Ismail Mohamed Abdulwahab from Brixton, London, whose tragic death came to light last night after he died at King’s College Hospital on Monday.

The oldest patient included in today’s update was 99 years old.

But the true size of the outbreak remains a mystery because of the UK’s controversial policy to only test patients in hospital – and not the tens of thousands of Britons with milder symptoms who are recovering at at home.

In other UK coronavirus news today: