Half of businesses expect to lay off staff once furlough ends – amid fears the UK faces 1980s-style unemployment.

A poll of firms found 51 per cent say they will need to axe workers within three months of the government’s huge coronavirus bailout being withdrawn.

A fifth believe they will have to let 30 per cent or more of their employees go – while only 34 per cent are confident they will not have to make any redundancies.

The dire results in the YouGov survey of 503 business leaders underlines the scale of the looming pain for Britons in the worst recession for 300 years.

Some 9.1million jobs are now being supported by the furlough scheme, which covers 80 per cent of wages up to a ceiling of £2,500 a month. 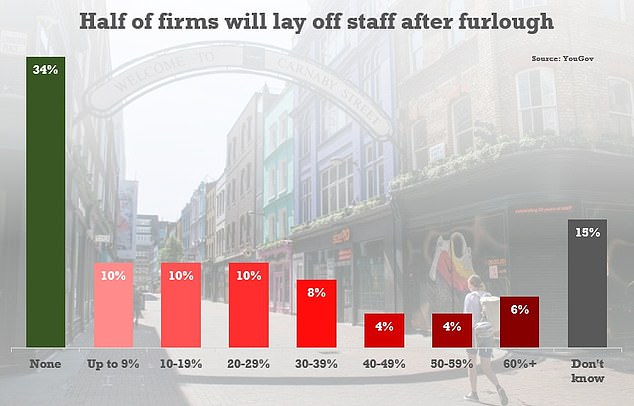 Chancellor Rishi Sunak has said it will stay in place until the end of October – but companies will gradually be made to share the burden with the state.

Despite the unprecedented efforts to keep people in jobs during lockdown, grim figures yesterday showed numbers on the payroll plummeted by 612,000 between March and May.

Jobless claims under Universal Credit have soared by 1.6million – 125.9 per cent – over the same period.

Vacancies showed an eye-watering reduction of 342,000 in March-May compared to the previous quarter – a sharper fall than than the credit crunch.

However, the worst of the hit for workers appears to have been masked by the government’s massive furlough bailout scheme, with experts warning of 1980s levels of unemployment by the end of the year. 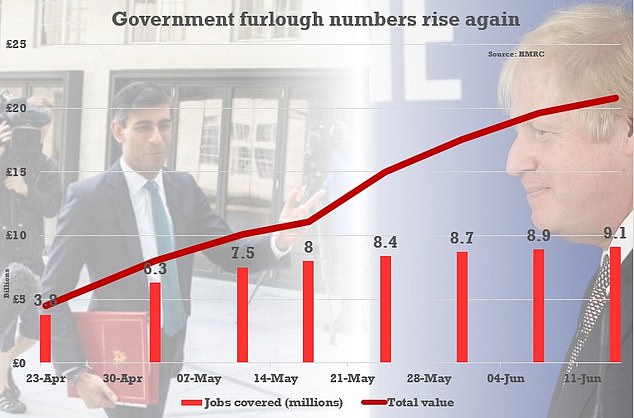 An update on the government’s furlough scheme yesterday showed that the number of jobs covered has hit 9.1million

The YouGov poll of business leaders, conducted between May 22 and June 7, found 51 per cent expected to make lay-offs within three months when the furlough scheme ends.

That includes 21 per cent who said they would have to let more than three in 10 of their workers go.

There was praise for the government’s economic response, with nearly half saying it had been good, compared to 38 per cent who said it had been bad.

Eight in 10 business leaders expected that the economy will be in worse shape in a year’s time.

However, there was a degree of optimism the prospects for their own companies.

Some 34 per cent thought their firm would be in the same condition in 12 months’ time, while 27 per cent predicted better.

The largest proportion – 39 per cent – said it would be worse.