Adorned with fresh flowers and lit candles, dozens of new graves have emerged in battle-scarred Irpin after the Russians withdrew from the outskirts of Kyiv.

Poignant drone footage has captured row upon row of burial sites marked with wreaths balanced against each other and dates, following the start of the invasion of Ukraine in late February.

Among them lies the coffin of Roman Vered, 53, who, his family say, was killed by Russian soldiers in the town which saw intense fighting in the first month of war.

Mr Vered’s body was recently identified in Kyiv’s morgue and he was finally laid to rest yesterday in the expanding cemetery, where more graves were being prepared by gravediggers. 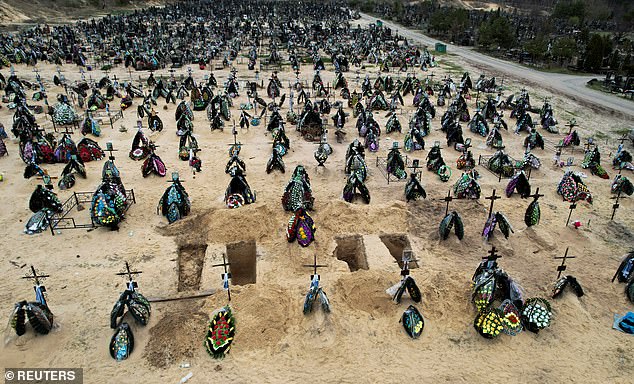 A view of more than 250 graves for people killed during Russia’s invasion of Ukraine, at a cemetery in Irpin, Kyiv 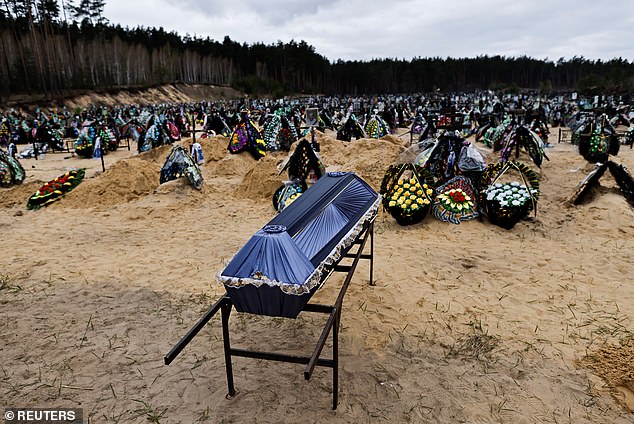 The coffin of Roman Vered, 53, who according to his family was killed by Russian soldiers, is seen before his burial 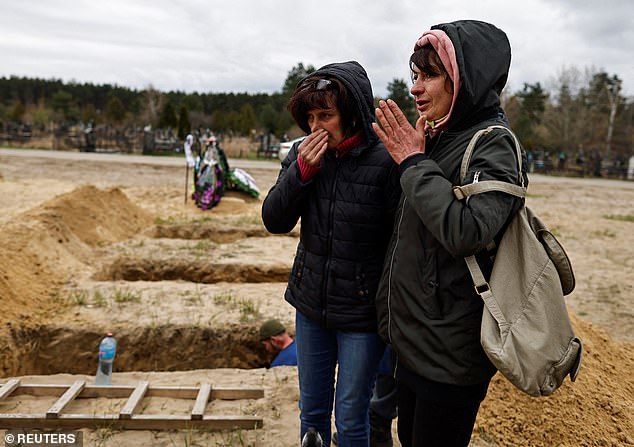 Tetiana Vered (left), 53, mourns the death of her husband, Roman Vered, 53, as she stands with Anna Proidenko, 57,

Since Russian troops withdrew from Irpin and other towns around the Ukrainian capital, increasing evidence has emerged of war crimes including the killing of innocent civilians.

Ukrainian investigators have examined 269 dead bodies in Irpin since the town was taken back from Russian forces in late March, a police official said, as workers dug fresh graves on its outskirts.

The town, which had a pre-war population of about 62,000, was one of the main hotspots of fighting with Russian troops before they pulled back from Ukraine’s northern regions to intensify their offensive in the east. 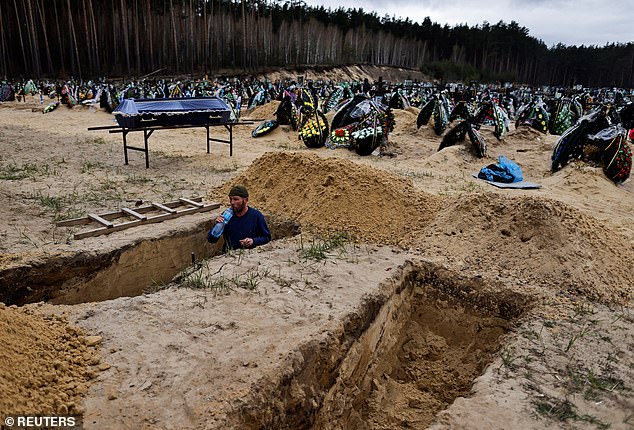 ‘As of now, we have inspected 269 dead bodies,’ said Serhiy Panteleyev, first deputy head of the police’s main investigation department, at an online briefing.

He said forensic work was ongoing to determine the cause of death for many of the victims, sharing photos of severely charred human remains.

He said seven sites in Irpin where civilians were allegedly shot have been inspected, without giving further details.