While announcing the start of Russia’s invasion of Ukraine last week, Vladimir Putin issued a simple request to the members of Ukraine’s military. In short: give up before the war had even started.

“I urge you to immediately lay down arms and go home,” Putin said in a remarkable display of chutzpah. As if he were offering the Ukrainians a generous offer, he added: “I will explain what this means: the military personnel of the Ukrainian army who do this will be able to freely leave the zone of hostilities and return to their families.”

Putin’s remark was as revealing as it was brazen, providing the world a thunderbolt of insight as Russian troops entered into a neighbouring country where many citizens cherish their independence. 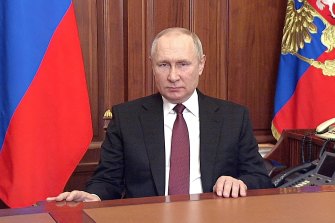 Rather than a dogged defence of their homeland, the Russian President expected Ukrainians to quickly wilt when confronted by a stronger invading force. That, after all, was what had happened when Russian troops stormed into Crimea in 2014 and South Ossetia, a breakaway region of Georgia, in 2008.

But not this time. Regardless of how the conflict ends, there is broad agreement among military experts that Putin bungled the initial stage of the conflict and that the Russian military has so far performed well below expectations.

Adam Lockyer, an associate professor in strategic studies at Macquarie University, said it appears Putin made a classic mistake that has tripped up dictators throughout history: being deceived by his own propaganda.

“He believes Ukraine is part of Russia’s sphere of influence, so he thought the invasion would go something like previous invasions in Eastern Europe,” Lockyer said, citing the Soviet Union’s crushing invasion of Czechoslovakia in 1968.

“My sense is that he drank his own Kool-Aid. This has not been the coup d’état operation he had been expecting.”

Lockyer said all indications suggest Putin believed Russian troops would quickly seize key airports, allowing Russian reinforcements to land by plane and subdue the Ukrainian government in Kyiv. The 190,000-odd Russian troops stationed around Ukraine’s borders would then enter the country not as active fighters but essentially as peacekeepers.

“That would explain why Russian soldiers don’t seem to have been prepared for the fierce resistance they are confronting,” Lockyer says. “The conscripts in particular do not seem sure of what their mission is and why they are there.”

The official added that “not all of them are apparently fully trained and prepared or even aware that they were going to be sent into a combat operation”.

Writing on Twitter this week, Michael Kofman, director of Russian Studies at the Centre for Naval Analyses, offered a damning assessment of Putin’s strategy. “From what I’ve seen of the Russian military operation, [it is] as though the ghost of Pavel Grachev is in charge,” he wrote.

As Russian defence minister in the early 1990s, Grachev infamously boasted that a single Russian paratrooper regiment could storm Grozny, the Chechen capital, in two hours. Instead, the war in Chechnya stretched on over two years and resulted in tens of thousands of deaths.

Mick Ryan, who recently retired as commander of the Australian Defence College, agreed Putin’s “delusions” about a swift surrender explain the Russian military’s inability to take over key Ukrainian cities in the early days of fighting.

“That is the original sin when it comes to Russia’s strategy for the invasion,” Ryan said. “All the other mistakes have flowed from that. I’ve been surprised at every level just how incompetent the Russians seem to be.”

Asked to name where the Russians had gone wrong on the battlefield, Ryan launched into a long list. “They’ve avoided using their traditional strength, which is firepower, en masse. They’ve committed their forces piecemeal and they have not supported them logistically. They did not achieve control of the air before launching the invasion, which was a terrible mistake. They have not fought as what we would call a ‘combined arms ground combat force’ where you combine infantry, engineers and artillery into one organisation.”

In Bakhmach, Ukraine, video emerged of a man trying to stop an advancing Russian tank.Credit:

Vastly outmatched by Russia’s military, in terms of raw numbers and firepower, Ukraine’s own air force is still flying and its air defences are still seen to be viable – a fact that is baffling military experts.

David Deptula, a retired US Air Force three-star general who once commanded the no-fly zone over northern Iraq, said he was surprised that Russia didn’t work harder to establish air dominance from the start.

“The Russians are discovering that coordinating multi-domain operations is not easy,” Deptula told Reuters. “And that they are not as good as they presumed they were.”

If Russian troops enter major cities such as Kyiv in coming days, as appears likely, Ryan predicted that would not be the end of the conflict. Instead, he expects to see a “battle of attrition” that causes a devastatingly high number of casualties. 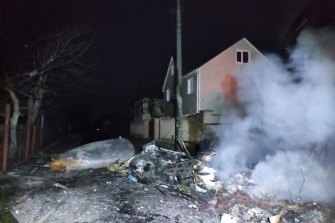 Emergency services image of a jet that crashed into Kyiv suburbs during a battle in the skies over the capital. Russia’s inability to control the airspace has been one of the biggest surprises. Credit:SESU_UA

Charles Miller, a lecturer in strategic studies at the Australian National University, said: “In every respect so far, things have gone worse from Russia than they would have expected.

”I think they expected to take Kyiv and Kharkiv within a few days of entering Ukraine and that hasn’t happened.“

Miller said it was especially striking that Russia had failed to use air power to support its ground troops as modern warfare tactics require.

He fears Ukraine’s stubborn resistance could lead Putin, whose ego could not accept a humiliating defeat, to try to “bomb them into submission”.

“That would be much more costly and destructive than what the Russians had planned for,” he said. “It would create a legacy of bitterness that could fuel an Ukrainian insurgency for years or even decades to come.”

Get a note directly from our foreign correspondents on what’s making headlines around the world. Sign up for the weekly What in the World newsletter here.