Health Secretary Matt Hancock ‘is having affair’ with his closest aide, 43, after pair were caught on camera having a passionate clinch outside his Whitehall office

Matt Hancock is today at the centre of a jaw-dropping cheating scandal after claims emerged of an alleged affair with his closest aide.

The Health Secretary, 42, has been caught on camera in a passionate clinch with millionaire lobbyist Gina Coladangelo, according to the Sun.

The incident is alleged to have taken place outside his office at the Department for Health’s headquarters in London.

Mr Hancock has been married for 15 years to wife Martha, and the pair have three children together.

Communications director and lobbyist Mrs Coladangelo meanwhile is a mother-of-three, whose husband is the founder of clothing shop Oliver Bonas.

MailOnline has contacted representatives for Mr Hancock for a comment.

A friend of Mr Hancock’s reportedly told the Sun they had ‘no comment’ on the matter, but that ‘no rules’ had been breached.

The Health Secretary, 42, has reportedly been seen having a passionate clinch with millionaire lobbyist Gina Coladangelo (pictured here with Matt Hancock outside Downing Street), according to the Sun 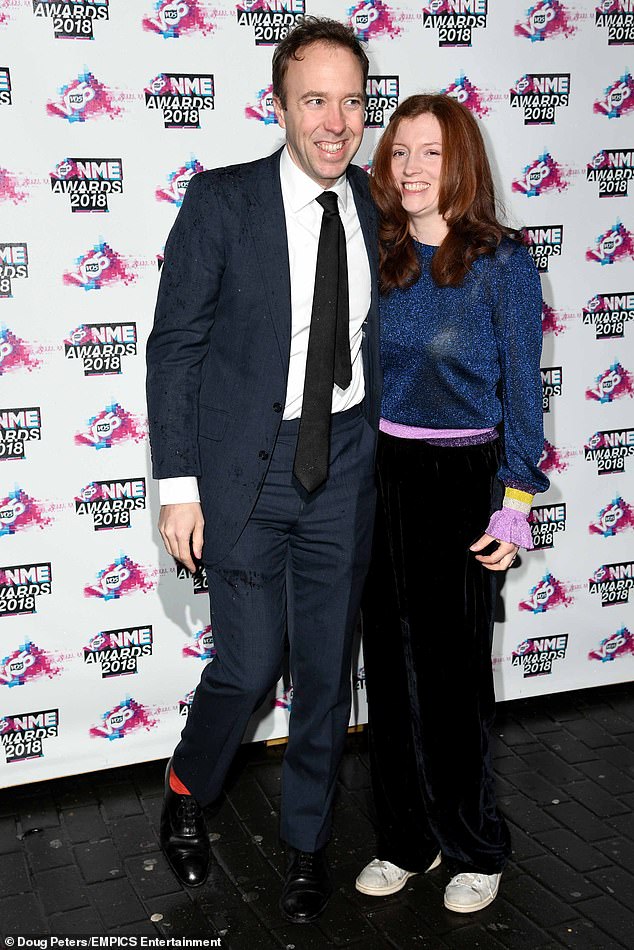 Mr Hancock has been married for 15 years to wife Martha, with whom they have three children

It comes after photographs appearing to show Mr Hancock kissing Mrs Coladangelo were published in the paper.

In the pictures, which appear to be from CCTV footage, Mr Hancock also appears to have his hand on the woman’s backside.

Meanwhile, source told the Sun that it was ‘shocking that Mr Hancock was having an affair in the middle of a pandemic’.

According to paper, the incident took place around 3pm on May 6, on the day of the local elections.

But whistleblower reportedly told the paper that they have been caught having ‘regular clinches together’.

The source reportedly told the paper: ‘It has also shocked people because he put her in such an important, publicly-funded role and this is what they get up to in office hours when everyone else is working hard.’

Mrs Coladangelo, who is a director and shareholder at lobbying firm Luther Pendragon, was appointed to the Department of Health as an unpaid adviser in March last year.

Mrs Coladangelo (pictured here with husband Oliver Tress – the founder of the Oliver Bonas clothing chain), who is a director and shareholder at lobbying firm Luther Pendragon, was appointed to the Department of Health as an unpaid adviser in March last year

Matt Hancock was born in Chester where he went to the exclusive private school the King’s School.

He did his A-levels in maths, physics, computing and economics before doing computing at West Cheshire College.

Like numerous Conservative MPs before him, he studied PPE at Exeter College, Oxford – where he graduated with a first.

It was at the elite university that he realised he had dyslexia, which he only opened up about in recent years.

He later did an MPhil in economics at Christ’s College, Cambridge, before turning to politics in 1999 when he joined the Tories.

But before becoming an MP, Mr Hancock trained as a jockey. He won a race in his constituency town of Newmarket in 2012.

The osteopath is the granddaughter of Frederick Millar, 1st Baron Inchyra – a British diplomat and Ambassador to West Germany.

She is also the great granddaughter of the 1st Viscount Camrose, a Welsh newspaper publisher.

The couple have three children – a daughter and two sons – and they live in Little Thurlow, West Sussex, in the constituency the MP represents.

They do not let their children have social media, but Mr Hancock has been seen playing rugby with the boys in London parks during the pandemic.

When their third child was born in 2013, Mr Hancock was not about to get two weeks of paternity leave immediately.

But he later took a two-month break, including the MPs’ extended summer recess.

He said at the time: ‘I am taking paternity leave myself. It’s important to form a strong bond with your children.’

The Hancocks have kept their family life private, with Mrs Hancock rarely pictured by her husband’s side.

In an interview with the FT, Mr Hancock revealed he spends the week in London and weekend in Newmarket.

He told the newspaper his ‘work-life balance is a challenge’, adding: ‘I pay a lot of attention to timetabling.

‘Both my professional and social and family time gets booked up a long way in advance and then you have to be strict about it.’

Mrs Coladangelo was appointed as a non-executive director at the department in September, meaning she is a member of the board.

She can claim up to £15,000 in taxpayers’ money in the role, though there is no public record of her appointment.

Mrs Coladangelo has had a parliamentary pass, which gives her access to Westminster, since April.

Reports of Mr Hancock’s alleged affair come just a day after the Queen expressed her sympathy for the Health Secretary.

She referred to him as ‘poor man’ as she welcomed Boris Johnson back to Buckingham Palace for her first in-person weekly audience with the Prime Minister since March last year.

The Queen then said: ‘Has it really? It is most extraordinary, isn’t it? I have just been talking to your Secretary of State for Health, poor man, he came to the privy council. He is full of…’

Mr Johnson interrupted and suggested ‘full of beans’ as the Queen then continued: ‘He thinks that things are getting better.’

Mr Johnson replied: ‘Well, they are…’

The expression of sympathy from the monarch comes after Mr Hancock found himself at the centre of a political firestorm after Dominic Cummings published text messages from the PM in which Mr Johnson referred to the Cabinet minister as ‘totally f****** hopeless’.

The Health Secretary dismissed the significance of the bombshell messages from Mr Johnson.

He said that ‘at times of stress people say all sorts of things in private’ but ‘what matters most is how well you work together’.

The Cabinet Minister also said he is not embarrassed by Mr Johnson’s apparent assessment of his performance.

Mr Cummings, the PM’s former chief aide, stepped up his war with Number 10 last week when he published a number of messages sent to him by Mr Johnson.

In one exchange from March 27 last year, Mr Cummings criticised the Health Secretary over the failure to ramp up testing, with Mr Johnson replying: ‘Totally f****** hopeless.’

Another from the same day saw Mr Cummings complain that the Department of Health had been turning down ventilators because ‘the price has been marked up’. Mr Johnson said: ‘It’s Hancock. He has been hopeless.’

On April 27, Mr Johnson apparently messaged Mr Cummings to say that PPE procurement was a ‘disaster’, suggesting that responsibility should be taken away from the Health Secretary.

‘I can’t think of anything except taking Hancock off and putting Gove on,’ the PM said.

Mr Hancock was asked last week, during an interview with the BBC Breakfast programme, how he felt about the PM describing him as ‘hopeless’.

He said: ‘Honestly? It feels like ancient history, right? The vaccine programme is a huge success.

‘At times of stress people say all sorts of things in private. What matters is how well you work together.

‘We work very strongly together, firstly to protect life and secondly to get the country out of this. That is what matters.’

Told that it must be embarrassing for him to know Mr Johnson had said such things, Mr Hancock replied: ‘No, it isn’t really because of all the things we have delivered together.’