THIS is the heart stopping moment a hero saves a toddler from certain death after he plummets from the fifth floor of an apartment block.

The quick-thinking local leapt into action after spotting the stricken two year old perilously dangling from a ledge nearly 100 feet up. 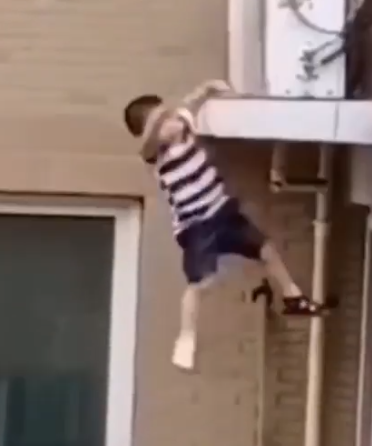 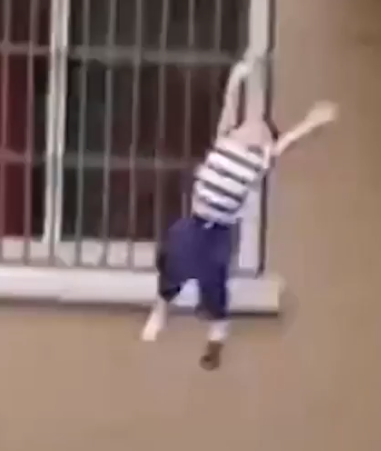 Chilling footage captures the moment the young boy loses his grip and starts tumbling towards the ground.

The chilling drama was filmed in the county of Xuyi in Huai'an City in East China's Jiangsu Province.

According to local reports, the boy was home alone when he locked himself in his bedroom.

He then used a stool to climb out of the bedroom window.

In the video, witnesses gasp as the boy ends up clinging to a ledge used to hold air-conditioning units. 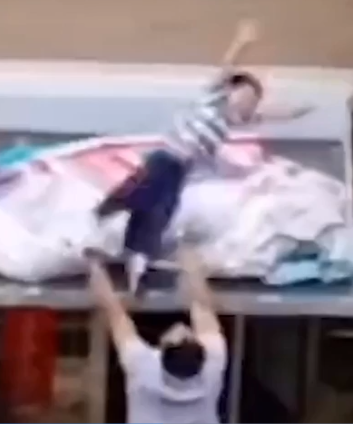 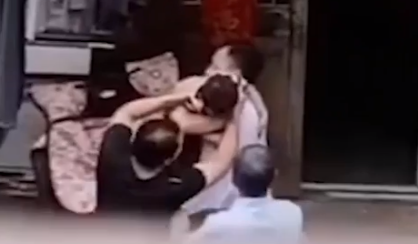 He then loses his grip and plunges to the ground, landing on blankets placed on a glass awning before bouncing into the waiting arms of neighbour Li Dehai.

Mr Li said the boy was taken to the county hospital and not found to have suffered any serious injuries thanks to his life-saving actions.

He added: "After I saw the boy hanging there, I grabbed one of my blankets and four of us stood below to catch him.

"But then I noticed the glass awning and feared he might hurt himself if he fell on that first, so I put the blanket on top and went to get another thicker one."

Mr Li was standing on a stool with both arms outstretched when the tot fell, the dramatic video shows.

He suffered a bruised arm but no other injuries during his heroics.