Hillary Clinton praised the new Democrat front-runner, Joe Biden, describing the former vice president as a ‘deeply decent person’ who is the ‘opposite’ of Donald Trump.

The former First Lady said on Tuesday that she was ‘not planning to endorse’ anyone in the party.

But after Biden’s better-than-expected Super Tuesday performance Clinton appeared to give her backing to her former colleague in the Obama administration.

Appearing on the The Tonight Show with Jimmy Fallon on Wednesday night, Clinton said ‘it was very exciting’ because Biden ‘had so much energy’ in his campaign following his first primary win in South Carolina last week.

Biden declared victory in the Super Tuesday primaries after winning nine of the 14 states up for grabs.

His main rival Bernie Sanders looked set to take four states, including California which has 415 delegates. 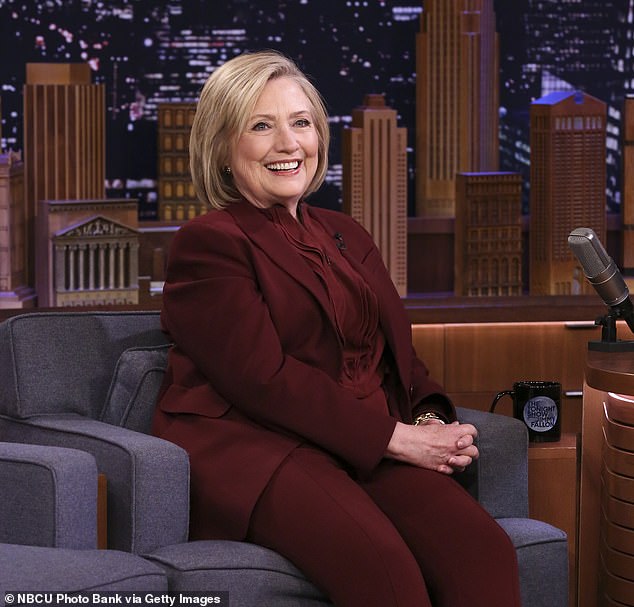 Hillary Clinton during an interview with Jimmy Fallon on The Tonight Show on Wednesday night. She described Joe Biden as ‘a deeply decent person’

During the interview the former secretary of state went on to say that Biden ‘doesn’t take cheap shots at people’ and that he is ‘the opposite of what we currently have in the White House’.

When asked about he Super Tuesday result by Fallon, Clinton replied that she has known Biden ‘a really long time’ and that voters decided ‘the most important thing’ was to ‘retire’ Donald Trump.

She said: ‘People know he [Biden] is a deeply decent person, he is a kind person, he doesn’t take cheap shots at people, he doesn’t insult people as a way of, you know, trying to put people down and lift himself up.

‘He is such the opposite of what we currently have in the White House, I really think that a lot of people had a chance to thin about it as this contest go going and decide, boy, the most important thing is we retire the incumbent, that’s more important than anything else.’

She added after the audience started cheering: ‘And he has the experience. He knows what needs to be done, he can repair the damage that he would be inheriting, so I think that is what was going on in people’s minds.’

Clinton also said Super Tuesday was the first time all sections of American society got a chance to have their say on the Democrat presidential nominee. 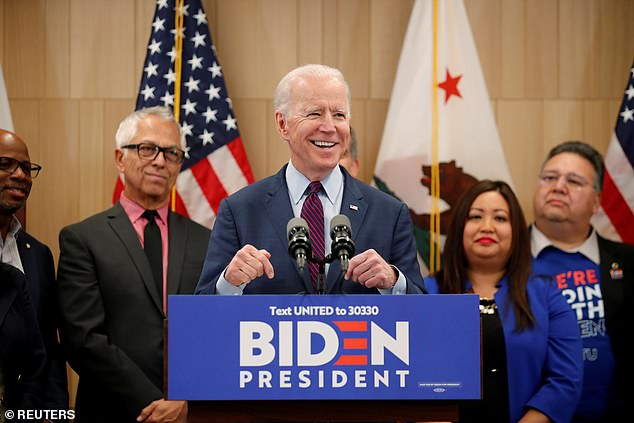 She added: ‘It’s the first time that the real diversity of our country is going to go out and vote and then that vote will have a big impact on the outcome, as we saw last night with Joe Biden.’

Asked by Fallon what she thought of Biden’s success, Clinton said: ‘Look, I thought it was very exciting because starting in South Carolina, he had so much energy and what he had to say was, you know, really enthusiastic and positive and about what he was going to do and who he was.

‘And the people of South Carolina, obviously, rewarded that. And then, that kind of set off this momentum, and it carried him.’

Biden dominated was the south, with wins stretching from Virginia to Tennessee, Arkansas, Alabama, North Carolina, and Oklahoma. Biden scored a surprise win in Minnesota.

He won South Carolina with large swaths of the African-American vote, while Sanders did well among Latinos and attracted the youth vote.

The candidates are gearing up for their next battle on March 10 when they go head-to-head over six states.