The Himalayas have become visible from India for the first time in 30 years.

Pollution levels across much of the country – infamous for its dirty air – have dropped sharply amid the country’s lockdown as it tackles coronavirus.

Locals from the Jalandhar district in Punjab, nearly 125 miles away from the Himalayas, flocked to social media and shared impressive images of the snow-capped mountains. 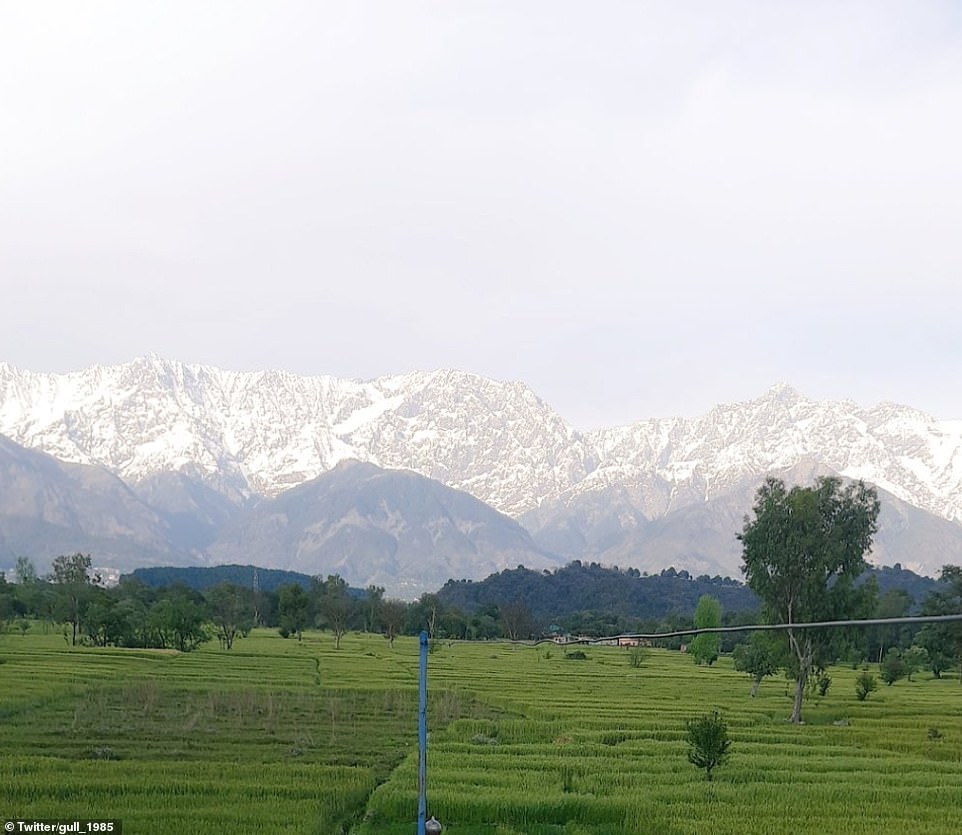 The mountain range is home to more than 110 peaks, including Mount Everest, and has elevations of 24,000ft 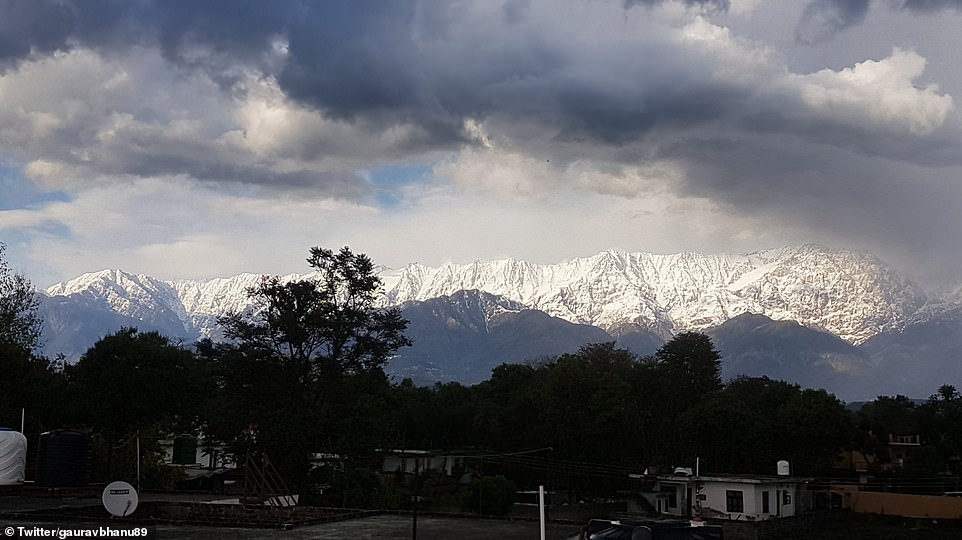 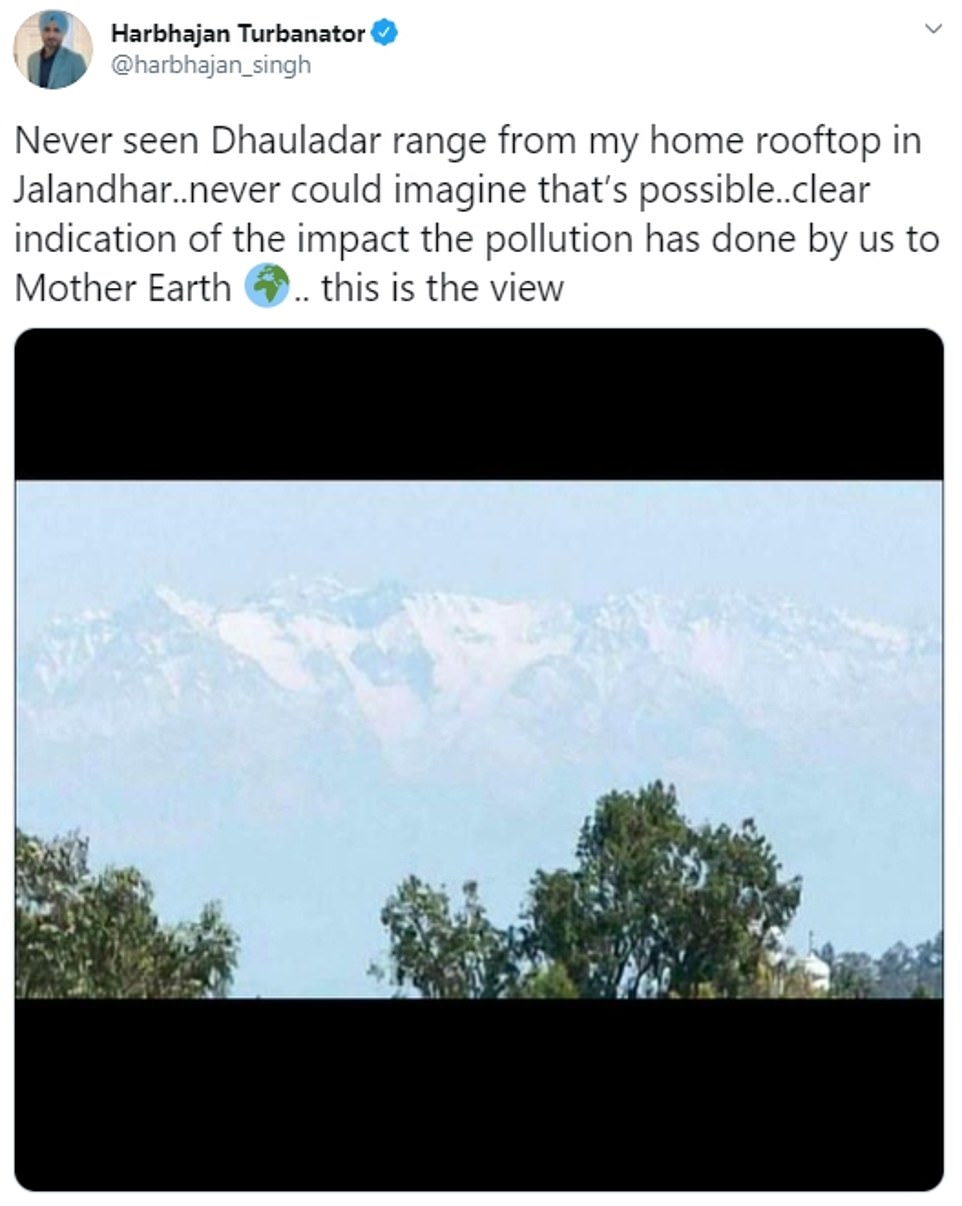 The former Indian cricketeer Harbhajan Singh said he had now witnessed the Himalayas for the first time ever.

He warned of the ‘clear indication of the impact the pollution’ has had on nature. 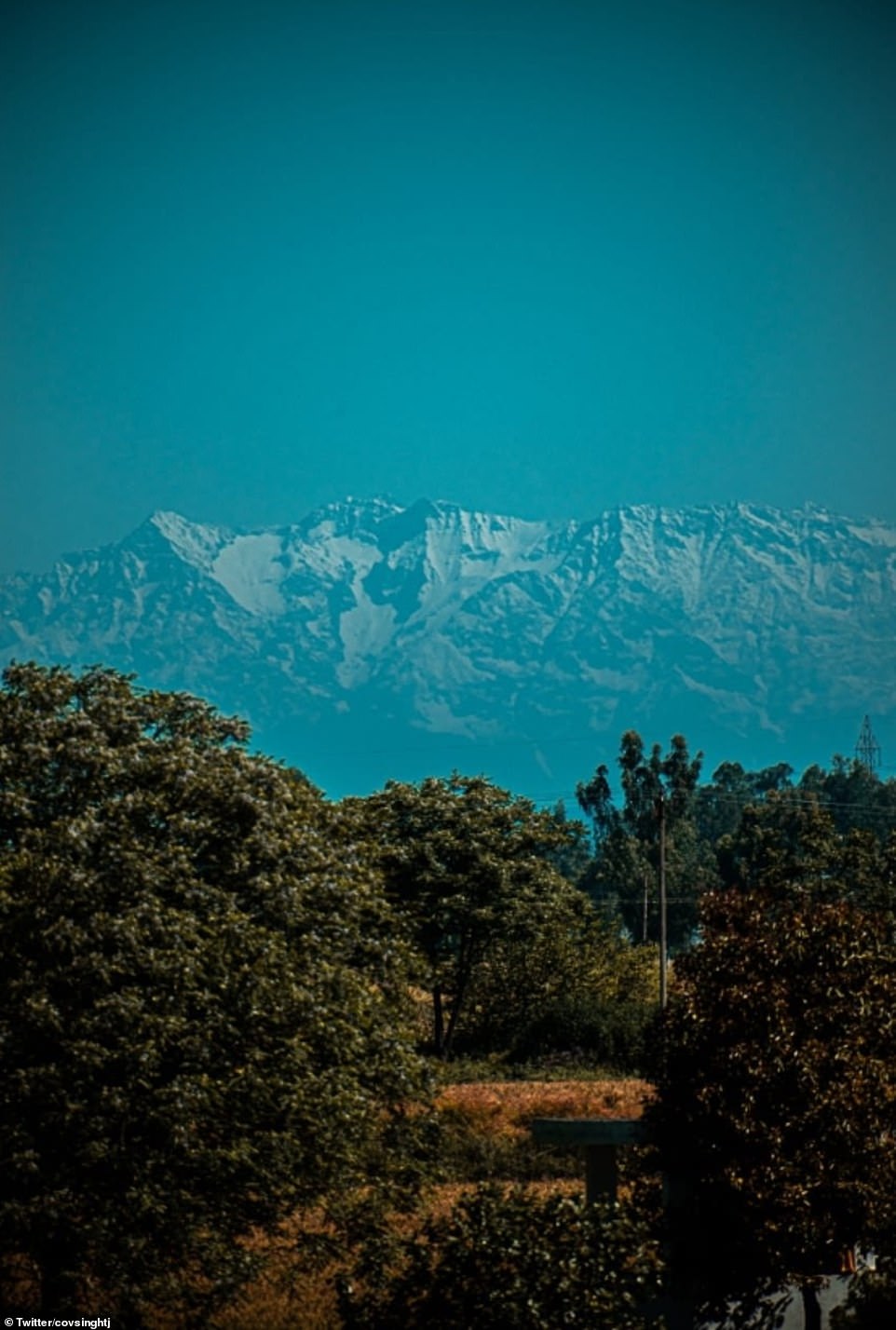 The snow-capped mountains can be clearly seen among the crystal blue sky, in what locals say is the first time in 30 years

India has a population of around 1.4 billion people and last year topped charts as having the world’s worst polluted cities according to IQAIR.

But the country’s strict 21-day lockdown means fewer cars and businesses are in operation, and pollution levels have slumped. 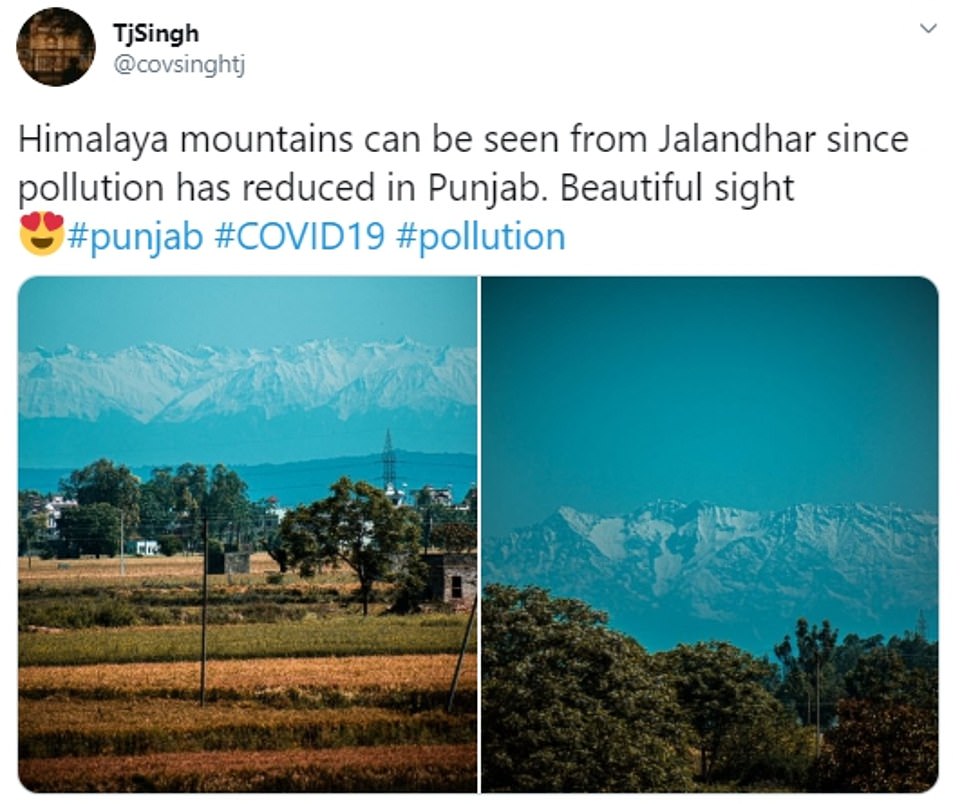 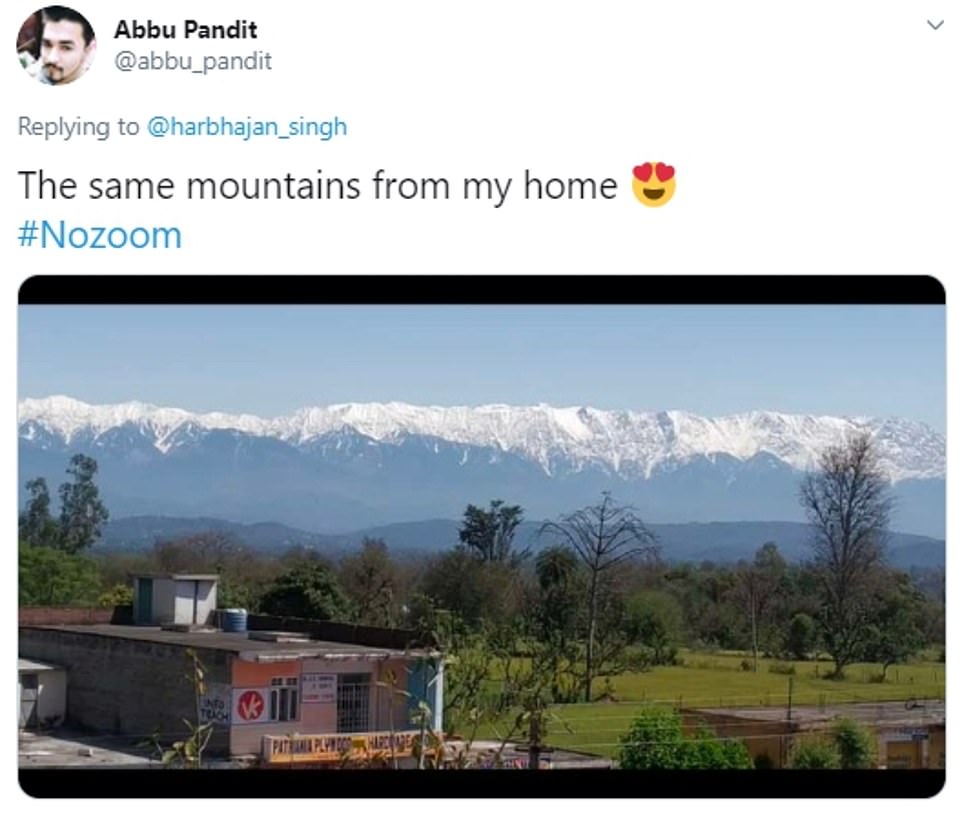 Another user who described the view from Punjab as ‘Just amazing’ as he looked on at the Himalayas from his rooftop.

India’s Central Pollution Board said the nationwide lockdown has resulted in significant improvement in air quality in the country.

A report from the India Today Data Intelligence Unit reads: ‘Data shows that on average, Indian cities had an AQI of 115 between March 16 and 24. The air quality started showing improvements from the first day of the 21-day lockdown. The average AQI fell to 75 in the first three days of the lockdown.’

A ‘good’ AQI is one of up to 50 and means air pollution poses little or no risk, while an AQI of between 51 and 100 is deemed ‘moderate’. 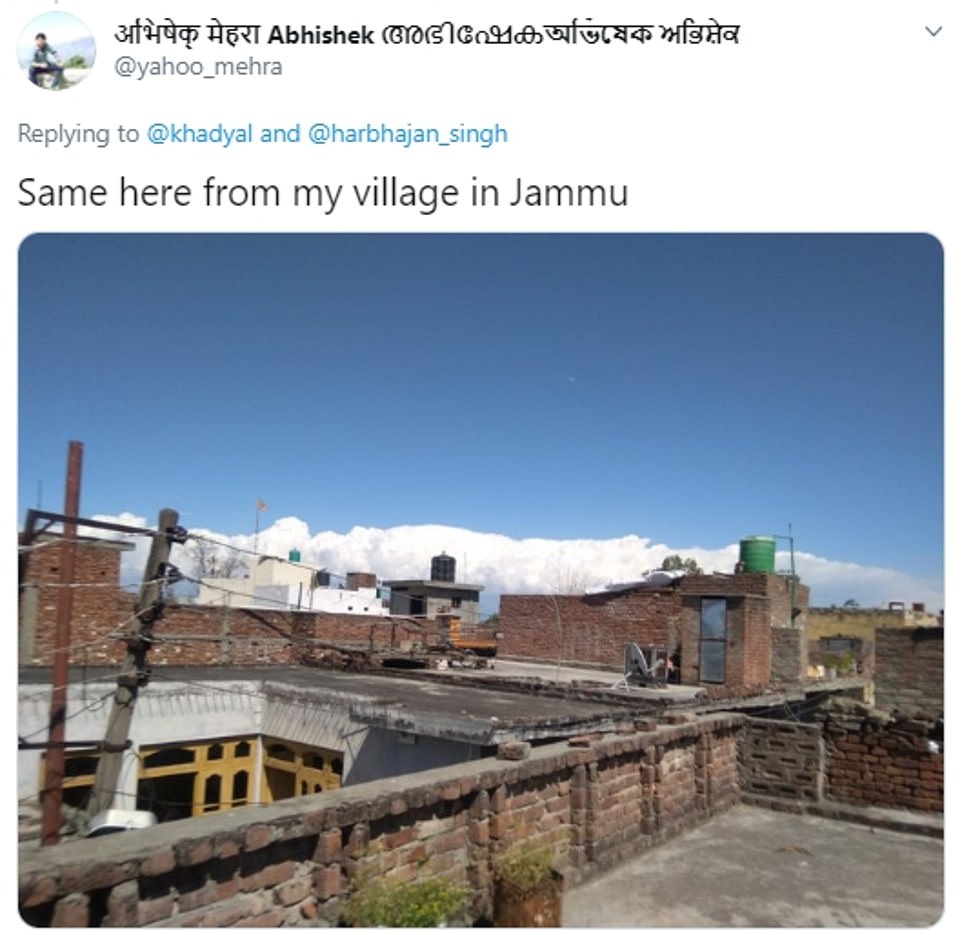 The World Health Organisation says the safe limit for air quality is to have a particulate matter reading of below 20mg/m3.

India, during most of the year, records a limit of five times higher  – 100mg/m3 – than the global safe limit, according to SBS News.

Sant Balbir Singh Seechewal told reporters: ‘We can see the snow-covered mountains clearly from our roofs. And not just that, stars are visible at night. I have never seen anything like this in recent times.’

He added: ‘Not just normal traffic is off the roads, but most industry is also shut down. This has helped bring the pollution level to unbelievably low levels.’ 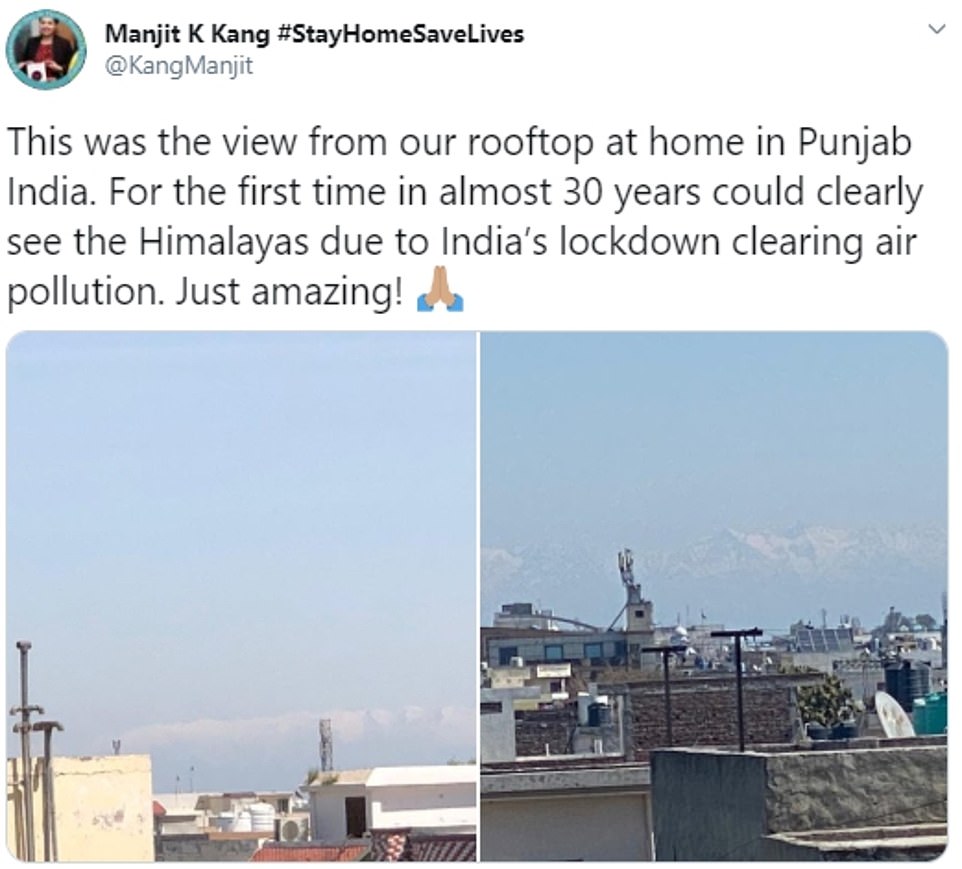 Users heralded the sight as ‘just amazing’, as they spotted the mountain range for the first time in 30 years

At the time the lockdown was imposed on March 24, Prime Minister Narendra Modi said: ‘To save India, to save its every citizen, you, your family… every street, every neighbourhood is being put under lockdown.’

He imposed measures including the closure of all non-essential businesses, as well as shutting schools and universities and enforcing a ban on nearly all public gathering.