In quotes: How Boris Johnson and his team changed tune on coronavirus testing – from the disease being ‘low risk’… to an urgent need to ramp up screening ‘by 250,000’ NOW – as the UK infection rate has rocketed

Boris Johnson has pledged to urgently increase coronavirus testing despite saying less than three weeks ago that the NHS was ‘well-prepared’ for an outbreak.

The Prime Minister told reporters in London yesterday that a ‘game-changing’ new test will be offered to hundreds of thousands of people as soon as possible.

He added at Downing Street that the UK was in negotiations to buy vast quantities of a simple ‘antibody test’ to show if someone has had the virus and recovered from it. 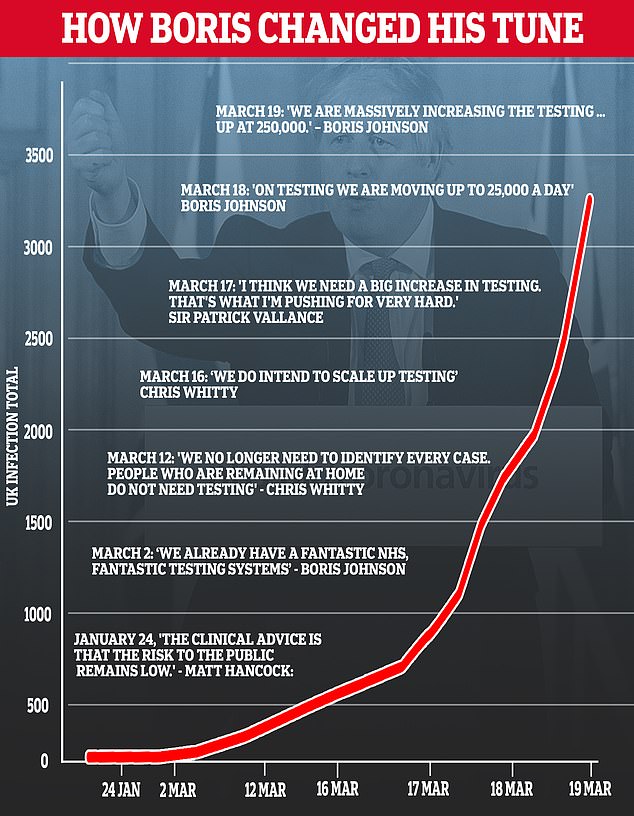 The comments by Boris Johnson and UK health officials on coronavirus testing this month are pictured in the graphic, following advice in January that the ‘risk to the public remains low’

But the urgency contrasts his position in the early stages of the outbreak which saw him insist the UK was ‘extremely well-prepared’ with a ‘fantastic testing system’.

Since then Mr Johnson and Britain’s top medical officers have spoken of the need to ‘scale up’ and have a ‘big increase’ in testing from 5,000 people a day to 250,000.

What UK health officials and politicians have said about testing

January 24, Health Secretary Matt Hancock: ‘The clinical advice is that the risk to the public remains low.’

March 12, Chief Medical Officer Professor Chris Whitty: ‘We no longer need to identify every case… we will pivot testing capacity to only people in hospitals with symptoms. People who are remaining at home do not need testing.’

March 16, Chris Whitty: ‘We do intend to scale up testing. But I think it is important to realise the scale of UK testing, which has been substantial. There have been 44,000 tests conducted and we will continue to scale up the testing every week.’

March 17, Chief Scientific Adviser Sir Patrick Vallance: ‘I think we need a big increase in testing. That’s what I’m pushing for very hard. Everyone is working hard to try and make that happen.’

March 19, Boris Johnson: ‘We are massively increasing the testing to see whether you have it now and ramping up daily testing from 5,000 a day, to 10,000 to 25,000 and then up at 250,000. That knowledge of where the virus is will make a huge difference to our management of the disease and our ability to reduce disruption and economic difficulty.’

Back on January 24, as the outbreak was taking hold in the Far East, Chief Medical Officer Professor Chris Whitty said the risk to the UK public ‘remains low’, but added: ‘There may well be cases in the UK at some stage. We have tried and tested measures in place to respond.’

This was echoed by Health Secretary Matt Hancock, who said on the same day: ‘The clinical advice is that the risk to the public remains low.’

Then on March 2, as it became clearer that an outbreak could take hold in Britain, Mr Johnson said: ‘Our country remains extremely well prepared… We already have a fantastic NHS, fantastic testing systems and fantastic surveillance of the spread of disease.’

But ten days later by March 12, Chief Medical Officer Professor Chris Whitty had spoken of plans to start limiting the number of tests, saying: ‘We no longer need to identify every case.

‘We will pivot testing capacity to only people in hospitals with symptoms. People who are remaining at home do not need testing.’

Four days later, on Monday of this week, Mr Whitty said: ‘We do intend to scale up testing. But I think it is important to realise the scale of UK testing, which has been substantial.

‘There have been 44,000 tests conducted and we will continue to scale up the testing every week.’

One day after that, on Tuesday, Chief Scientific Adviser Sir Patrick Vallance said: ‘I think we need a big increase in testing. That’s what I’m pushing for very hard. Everyone is working hard to try and make that happen.’

Following on from that, Mr Johnson spoke of a big push on Wednesday, saying: ‘We are moving up to 25,000 a day’. 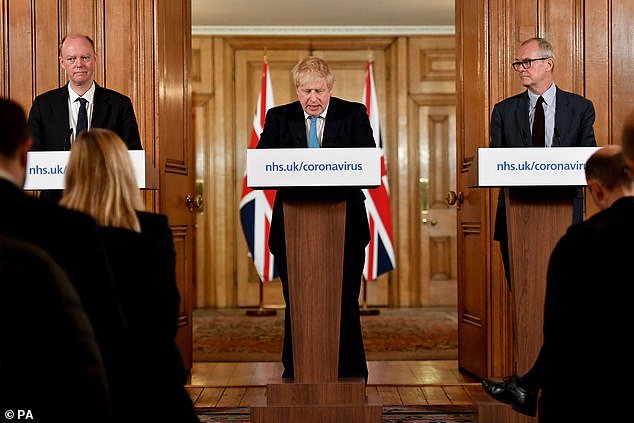 ‘That knowledge of where the virus is will make a huge difference to our management of the disease and our ability to reduce disruption and economic difficulty.’

The chief executive of a major London hospital claims NHS England is blocking medical staff from being tested for coronavirus, a leaked memo has revealed.

Doctors and nurses at King’s College Hospital have been told they cannot carry out the tests – even though they have the ability – until all the nation’s hospitals are ready to do the same.

A senior consultant warned last night that it was ‘absolutely beyond comprehension’ that hospitals in London, which are worst affected by the virus, are being stopped from testing staff.

The whistleblower claimed it had put doctors and nurses who may have been exposed to the virus into a ‘state of anxiety’ over whether they risked infecting patients.

The decision also leaves hospitals short of staff as they are forced to stay at home for up to 14 days if other members of their household have symptoms. Testing would allow those with negative results to return to work in hospitals.

According to minutes of a meeting of hospital bosses at King’s College Hospital on Wednesday evening, chief executive Professor Clive Kay warned that NHS England did not want testing of staff to begin until it was available across the country.

The internal memo obtained by the Mail states: ‘Clive made it very clear that at present we should not be testing staff for Covid-19.

‘The reason is that nationally there is not capacity to test all staff that will require testing.’

It said NHS England ‘does not want to introduce inequity in the system where some Trusts are testing staff and others not or not able’. A separate leaked email shows that doctors at the hospital were told this week they were testing too many patients.

A senior consultant at the hospital said last night the decision to delay testing doctors and nurses until it was available across the country put staff and patients at risk, adding: ‘This is muddled thinking. The capacity to substantially upscale testing is already in place. NHS England knows this. Trust chief executives are under huge pressure not to test staff or public. This is completely against all infectious disease principles.’

The consultant said staff swab every patient who arrives for comparably minor MRSA bacterial infections, but must admit people without discovering whether they have coronavirus.

This means they do not know whether to segregate them or doctors and nurses need to use personal protective equipment when treating them. The medic added: ‘We should test every admission. Test, test, test, it is really clear.’

The doctor also warned that staff with mild symptoms were anxious because they could not check whether they had coronavirus, adding: ‘If I have a bit of a cough, but know my hospital is falling apart, do I self-isolate for 14 days?

‘Do I infect the hospital? Do I stay at home and let people die because I am not there? Not giving that opportunity to a doctor to know are they infectious is crazy. The capacity is there.’

Boris Johnson wants to increase the number of tests per day from 10,000 to 25,000 and to prioritise testing NHS staff. But the British Medical Association said members claimed this wasn’t happening.

A spokesman for King’s College Hospital said: ‘We are in the process of reviewing staff testing.’

If people test positive in the ‘antibody test’, they will be deemed fit to return to work because they will not be able to contract the virus again and pass it on.

Mr Johnson said yesterday: ‘UK experts and scientists expect to start trials for the first vaccine within a month. And above all we’re getting better at testing.

‘We’re in negotiations today to buy a so-called antibody test, as simple as a pregnancy test, which can tell whether you have had the disease.

‘It’s early days, but if it works as its proponents claim, then we will buy literally hundreds of thousands of these kits as soon as practicable.

‘It has the potential to be a total game-changer.’

In the UK and around the world, hopes are also growing that a drug cure for Covid-19 can be found – with promising results from several existing experimental treatments.

British vaccine trials that could prevent people catching the disease will soon be under way.

In addition, trials of potential vaccines are also under way with results expected by April, yesterday’s press conference heard.

Meanwhile  the Government’s health agency said trials of a coronavirus vaccine could begin within the next month, as it prepares to start evaluating a drug developed by Oxford University.

Scientists at Public Health England (PHE) could give the go-ahead for human testing well ahead of the usual time frame for drug development.

The health agency is only due to start preliminary evaluation of the vaccine on animals next week.

PHE researchers have collaborated with teams at Liverpool and Bristol universities to create an exact replica of Covid-19 for use in the testing process.

Those behind the vaccine have been given permission to commence human trials before animal tests are complete, the Guardian reported, in a bid to accelerate the development process.

Permission was granted after similar vaccines developed for other diseases were proved safe in human trials.

Professor Adrian Hill, head of the Jenner Institute at Oxford, told the Guardian: ‘We are conscious that a vaccine is needed as soon as possible and certainly by June-July when we expect a big peak in mortality.

He added: ‘This is not a normal situation. We will follow all standard trial safety requirements but as soon as we have a vaccine that’s working we anticipate there will be an accelerated pathway to get it deployed to save lives.

‘The more vaccine we can provide the sooner the better.’

The team at the Jenner Institute only began work on the drug on January 10 this year.

Earlier this month, Anthony Fauci, the director of the US’s National Institute of Allergy and Infectious Diseases, said he expected it would be at least 12 to 18 months before a coronavirus vaccine is widely available.

The Jenner Institute said it had based the drug on an ‘adenovirus vaccine vector’ based on an adenovirus isolated from a chimpanzee.

An adenovirus is a group of viruses that typically infect membranes of the eyes, respiratory tract, urinary tract, intestines and nervous system. 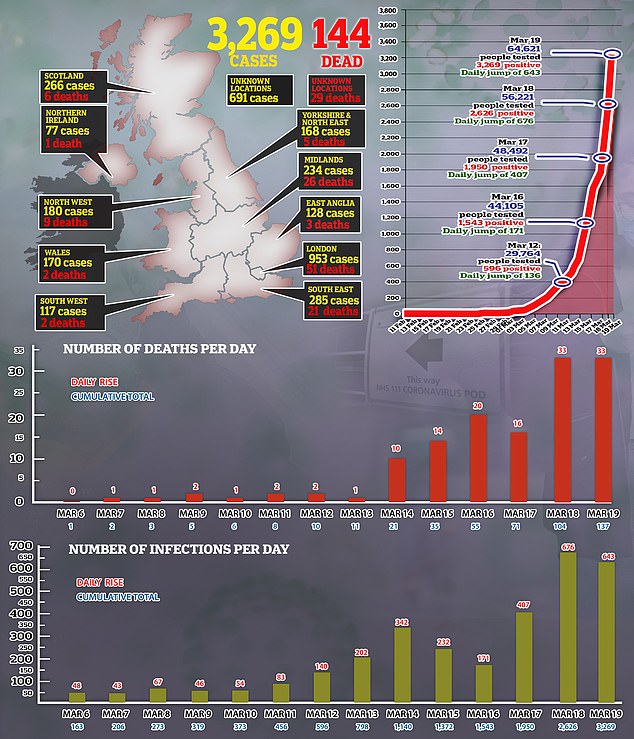 The Jenner Institute said: ‘Chimpanzee adenoviral vectors are a very well-studied vaccine type, having been used safely in thousands of subjects, from one week to 90 years of age, in vaccines targeting over 10 different diseases.’

It said among its advantages is that it can ‘generate a strong immune response from one dose’ and is safe to use on people with pre-existing conditions such as diabetes.

The grant is part of the US government’s plans to help bolster the global response to the pandemic, PHE said. 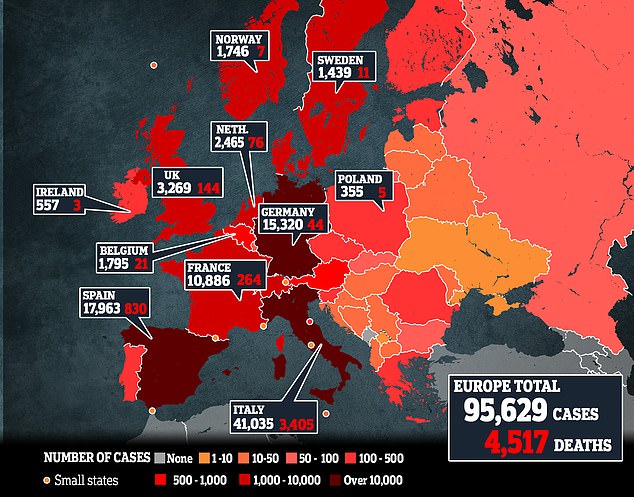 The funding follows a request from international foundation the Coalition for Epidemic Preparedness Innovations (Cepi) for PHE to assist in evaluating different vaccines under development around the world.

Professor Miles Carroll, deputy director of the National Infection Service at PHE, said: ‘We look forward to continuing to work with world-leading academic and pharmaceutical partners to accelerate progress towards safe and effective interventions to limit the impact of this new infection as rapidly as possible.’

On Monday, WHO director general Tedros Adhanom Ghebreyesus said: ‘We have a simple message to all countries – test, test, test. All countries should be able to test all suspected cases, they cannot fight this pandemic blindfolded.’