Drivers are facing treacherous conditions on the roads in the UK after heavy snow, they also could be hit with potential fines amounting up to £30,000 if they are not prepared.

The winter weather has lead to cars skidding and crashing into other vehicles this morning, while on the M25 traffic ground to a standstill.

Drivers need to take care not only to avoid accidents in the winter but also individual fines ranging from £40 to £10,000.

A motorist caught breaking several often overlooked laws while driving in the snow could be liable to pay more than £30,000 worth of driving fines and penalties.

Here are ten driving mistakes that could cost you thousands in fines and how to avoid them: 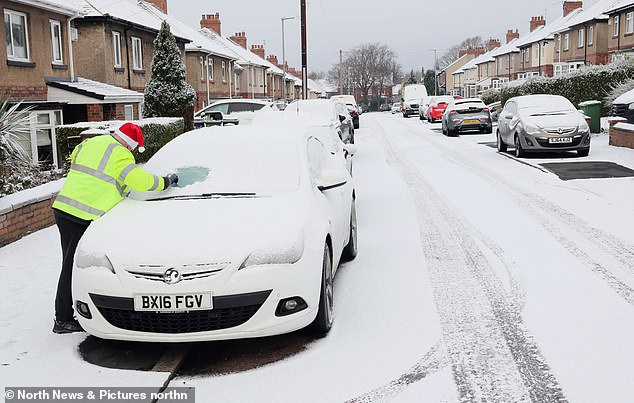 A vehicle with low tread on its tyres becomes even more dangerous in snowy and icy conditions as it can already be difficult to come to a stop.

To avoid the fine you must have the minimum legal tyre tread depth for cars in the UK of 1.6mm, but a tread depth of 3mm for tyre is best.

Tests by UK technical organisation MIRA found that the difference in wet braking distance between a tyre worn to 3mm and one worn to 1.6mm can be as much as 44 per cent.

Most drivers take extra care in wintry conditions, but failing to drive appropriately to the road conditions could land you the joint second largest fine on the list.

Being mindful of snow on the road, the increased risk of the car sliding and of longer breaking distances will help you avoid any potential carless driving charges.

Intentionally driving through puddles can have a significant financial penalty, but you are unlikely to be charged if the puddle is unavoidable and you slow down appropriately beforehand.

Driving through at speed can be dangerous as there is potentially to lose control of the car, especially if there is snow and ice on the road.

The Highway Code states that drivers should ensure ‘clothing and footwear do not prevent you using the controls in the correct manner’.

To avoid this fine you must make sure your footwear isn’t compromising your driving. 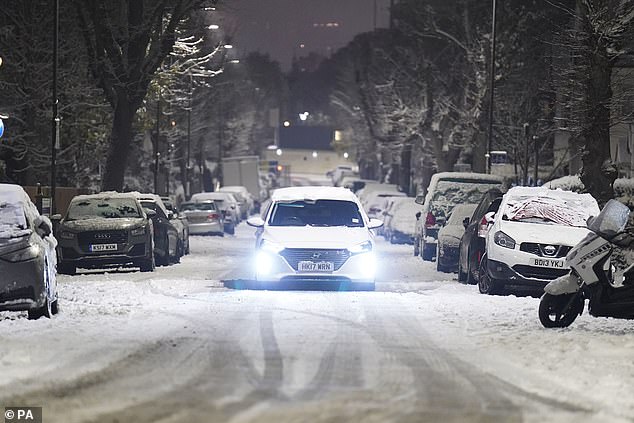 Most drivers take extra care in wintry conditions, but failing to drive appropriately to the road conditions could land you a £5,000 fine

A very simple fine to avoid, by remembering to scraping off any snow before you set off.

Failing to do so can be expensive and cause potentially dangerous situations for yourself or drivers behind you.

Much like the snow on the car roof fine, taking 30 seconds to make sure you lights are now covered and your number plate is visible could save you £1,000.

It can be frustrating scraping ice off the windscreen in the morning, but not doing this properly or only clearing enough so you can see through a small gap could be costly.

Set aside enough time in the morning to scrape off all the ice and snow so that you have full visibility.

Like having snow covering your lights, defective exterior lights can be dangerous – particularly in the snow.

Taking a quick look around your car after starting the engine and turning your lights on could save you £1,000

Engine on while parked on a public road – £40

While this law might seem surprising and something that occurs regularly, you could be fined £40 for doing so.

It can be tempting to heat your car up in the colder weather, but the Highway Code states ‘you must not leave a vehicle’s engine running unnecessarily while the vehicle is stationary on a public road’.

Foglights should be used when it is foggy but not when it is snowing.

Though visibility is poorer when it is snowing, using foglights could leave you with a £30 fine.