As profitable pitches go, they don’t come much better than the one Abdul Daner has bagged for his ice-cream van. Parked opposite the London Eye, business is usually roaring, whatever the unpredictable British weather.

On an average day excitable tourists thronging to one of the country’s most popular visitor attractions snap up around 600 cones, 500 lollies and 100 hot dogs. Lately, however, Daner has had little to smile about at the end of an exhausting 12-hour shift, counting his bad luck rather than his cash with his thoughts dominated by the c-word: coronavirus.

“I’m really worried about what’s going to happen over the next couple of months. My fear is that things are just going to get worse. Everyone is scared about catching it and the tourists aren’t coming, which is hitting me in the pocket – and it hurts,” he said.

To allay customers’ fears, Daner, 29, has started wearing latex gloves, while a large bottle of hand sanitiser has been strategically placed on the front shelf of his van, next to a stack of cones waiting to be filled. “It’s not made any difference, only made me more paranoid. I’m constantly washing my hands and I’ve even started wearing the latex gloves to bed, which is a bit weird,” he joked.

Close by, tourists patiently waited to board the London Eye, but staff privately admitted that tickets were still available for the attraction, which is usually sold out at weekends and annually attracts 3.5 million people. But the very mention of the virus prompted security officials to intervene, asking the Observer to leave the area because “journalists are spreading panic”.

With the number of coronavirus cases rising in Britain, the capital is a barometer for the impact the disease – or the fear of it – is having on everyday life. High-profile shops were not as packed as usual, traffic was much lighter and even public transport felt pleasantly spacious as fewer passengers boarded buses and the tube.

Two miles north of the London Eye, in Chinatown, there was a strange silence, despite its prime location in the heart of the West End. Officials at a community centre which offers classes in Chinese culture reported that many students had not turned up for the past two weeks. Staff in a local betting shop moaned about the dearth of punters willing to risk their money. Restaurants reported a dramatic drop in bookings.

The Beijing Dumpling restaurant, close to Leicester Square, usually has queues of diners waiting to get in for lunch and dinner. “Nobody is interested in Chinese food at the moment or visiting Chinatown. People seem to think that if you come here to eat, then you’ll catch the virus. It’s racist and it’s pathetic,” said a waiter. “How long this goes on for, nobody knows. But we are worried we might lose our jobs.”

Londoner Geoff Butcher, who was having a pint in the nearby Moon Under Water as he waited for friends to join him before watching their team West Ham, admitted he was quite enjoying a quieter capital. “I’m more worried about the football being cancelled than coronavirus,” he said, adding that he is washing his hands more often. “I can’t see how stopping major sporting events is going to help. If you ask me, the government and the media are making a big fuss about nothing. I’ve not done any panic buying, and I’m going to continue going to the pub and watching West Ham,” he said.

Across the capital at Madame Tussauds, which usually has mammoth queues outside, there was not a single visitor waiting in line as staff kicked their heels and a red-coated man trying to sell tickets for a tourist bus looked on forlornly. “I’ve never seen it this bad. I’m sure a lot of people aren’t buying tickets because they don’t want to touch my hand. And who can blame them?” said one.

With coronavirus dominating the headlines, Kelvin Fernandes and Noahelia Gonzalez admitted that they had carefully digested as much news as they could before making a decision to fly from their home in Portugal to London for a three-day break. They had brought hand sanitiser with them, after reading about its shortage in British stores, had been washing their hands regularly and also bought face masks, which they had so far chosen not to wear.

But what had struck them most about their first ever visit to Britain was its obsession with something more infectious than the virus. “The royal family,” they said. “Everybody in this country is obsessed by them; what they’re doing, how they live, what they eat. People are more concerned about them than the coronavirus if you ask me.” 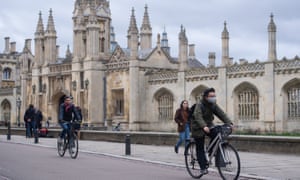 For weeks now, the streets of Cambridge have been eerily quiet. Outside King’s College Chapel, where hundreds of tourists normally gather to take photos, there was little sign of life. “We’ve seen demand fall immensely since January,” said Sam Wilson, who works for Cambridge Alumni Tours, selling walking and punting tours on the street outside King’s. “I would expect a good 80% more tourists than are here now.”

He has never seen it so quiet. “It’s absolutely dead. In the week you don’t see any tourists at all.” Before the coronavirus outbreak occurred, almost all of his customers were Chinese. “They’ve pretty much all gone. You don’t see any. It’s very, very rare to see one now,” he said.

At Simms sweetshop across the road, demand for traditional British sweets like sherbet lemons and pear drops has fallen dramatically over the past two months; Chinese visitors used to account for around 95% of the customers. “Without the Chinese, it’s very difficult to survive,” said manager James Beaumont. He is worried about how the virus will affect his business in the long term. “If it did continue, we would really struggle.”

More than eight million tourists visit Cambridge each year, delivering an £835m boost to the local economy and accounting for 22% of jobs. “This road’s normally gridlocked with guys from all over the world,” Lee Coaton said, as he stirred a large vat of liquid fudge in a shop opposite King’s College chapel. He has also noticed a fall in customer numbers over the past month and said a number of groups had cancelled their bookings to learn how to make fudge. “Maybe everyone is panicking too much, I don’t know,” he said.

Almost no one is wearing face masks on the streets, but for a university town full of retired dons there has been a noticeable lack of elderly residents out in public. The market square, another central tourist hotspot, looked deserted. “It’s been really quiet on the market for a couple of weeks at least,” said Charmaine Comiskey, who sells T-shirts on the Cambridge Tees stall. “Demand is down about 50%, definitely.”

She is concerned about what the future holds. “We’ve still got to pay our rent on our stall. I’m thinking of maybe giving up a day, because I can’t see it getting any better in the summer.”

On the banks of the river Cam, Adam Boylan said he had never seen Cambridge so empty at this time of year. He has been working at Scudamores, the oldest pleasure punting company in Cambridge, for six seasons. Demand from Chinese customers was now “non-existent”, he said. “A lot of Italian and Spanish school groups come down usually, and it’s unlikely they will come now due to the virus. That could have a big effect on us.”

But one of the few visitors drinking in the sights of Cambridge, Czech tourist David Kner, offered a silver lining to local businesses: “I decided to come here on Wednesday. I thought, there will be less people, so let’s go.” On his first visit to the normally crowded medieval streets, he said: “I like that there’s few people here. But I don’t like the reason for that.”