Prisoners have been gloating on social media about their comfortable lifestyles as they post pictures of TVs, games consoles and food stockpiles in their prison cells.

Images posted on social media by a number of inmates on mobile phones, which are banned in prisons, show huge hoardings of luxuries such as boxes of cereal, powdered milk and even a stereo system.

Others showcase their supplies of squash, fizzy drinks and tinned tuna. 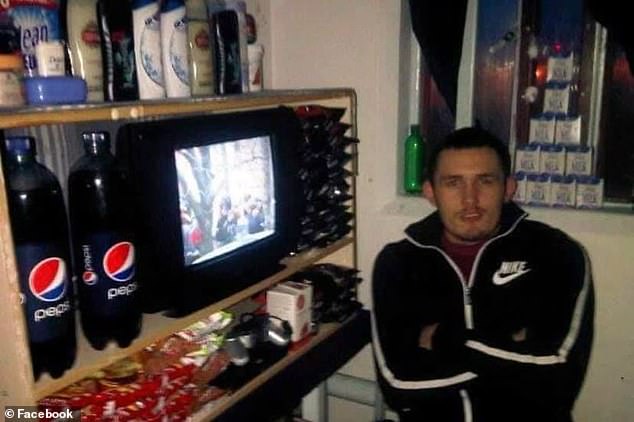 A prisoner poses for a photo in his prison cell alongside his TV and stockpile of toiletries and fizzy drinks. 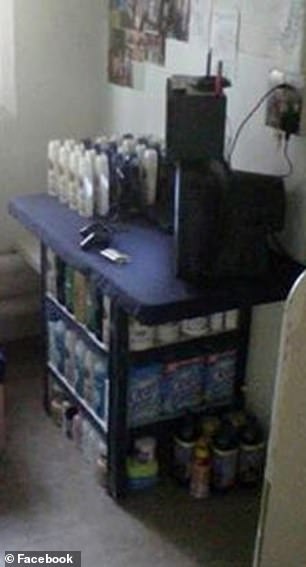 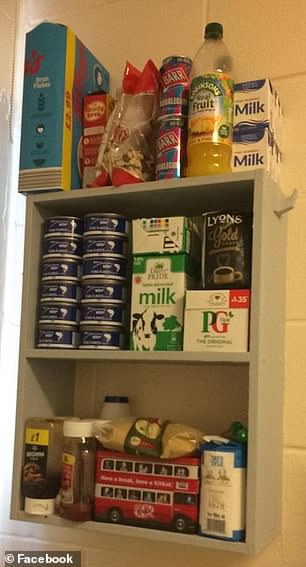 The pictures posted on Facebook by some inmates show their stockpile of food including squash, fizzy drinks and cereal

Although mobile phones may be banned, it is not against he rules for inmates to be sent money from outside the prison to purchase additional items for their cells.

In a statement, a Prison Service Spokesperson said: ‘We apply common sense to what prisoners can buy and keep in their cells.’

The Sunday Mirror reports that a prisoner posting on Facebook under the name Chris Hutchinson, claims to have comforts such as a TV, Xbox and a music system in his cell.

Chris, who is believed to be serving ten years in HMP Gartree, Leicestershire, compared life in his cell to ‘being in Butlin’s’ as he used money sent to him by friends and family to buy products from the Argos catalogue.

One officer told the Mirror: ‘Most inmates have extra bits and pieces in their cell but it depends on the nature of the inmate and what regime they are on.

‘Some inmates watch TV or play computer games all day. While some have access to money and outside help, others don’t, and it can cause conflict.’

The pictures on social media also show a selection of adult magazines lining a storage in shelf in on prisoner’s cell.

Another prisoner, whose cell is lined with items of food compared his room to a village shop.

One prisoner posting under the name ‘Darcus Marcus’ said he got an Xbox into his cell the same way he managed to get hold of a mobile phone.

The Ministry of Justice said it is unclear where the pictures that appeared on social media were taken or if they are even in an English prison.