Sea ya later! Italian cyclist tries to dodge £350 coronavirus lockdown fine by riding into the ocean

A cyclist waded into the sea with his bike to allegedly try and avoid a £350 fine amid Italy’s coronavirus lockdown.

The man went into the sea after being approached by authorities on Otranto beach in Italy’s southern Apulia region, according to local news.

In footage of his bizarre attempt, the man is seen wading knee deep in the sea while holding his bike. 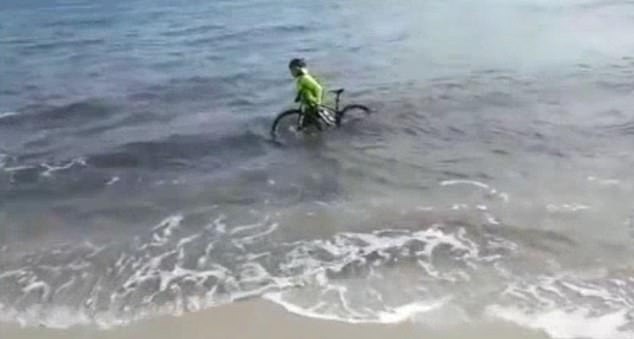 He is heard shouting, ‘I haven’t done anything,’ as he continues walking in the water.

A police officer behind the camera is heard telling him, ‘I know you haven’t done anything, but we need to do identification checks.’

He was ordered by the police to come out of the sea but continually refused.

However, he was eventually identified and given a £350 (€400) fine, according to Italian news agency ANSA.

Italy has been in lockdown for several weeks in an attempt to tackle the rampant coronavirus outbreak. 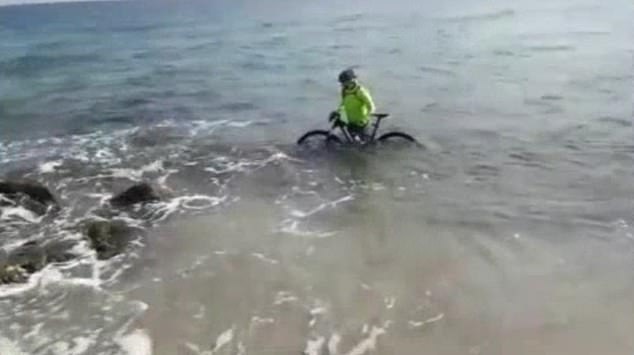 The man went into the sea after being approached by authorities on Otranto beach in Italy’s southern Apulia region, according to local news

Tougher sanctions for people who ignore lockdown rules were recently brought in by the country’s government.

The Economist Intelligence Unit said Thursday it expected Italy’s GDP to contract by a colossal 7 percent for the year.

Italian experts say some 65 percent of Italian small and medium businesses are at risk of bankruptcy.