August has come early to Madrid. This March, a month when the warm spring weather would usually compel the shedding of hats and scarves and the return of tables and chairs to pavements outside bars and cafes, the coronavirus has forced the capital on to a high-summer footing.

As in August, schools and shops are closed and the city is quiet. But Madrileños have not abandoned the capital for the mountains or the coast, and the suddenly loud birdsong owes less to an absence of human activity than to the fact much of it is now having to take place behind closed doors.

What is the coronavirus and should we be worried?

It is caused by a member of the coronavirus family that has never been encountered before. Like other coronaviruses, it has come from animals.

The virus can cause pneumonia. Those who have fallen ill are reported to suffer coughs, fever and breathing difficulties. In severe cases there can be organ failure. As this is viral pneumonia, antibiotics are of no use. The antiviral drugs we have against flu will not work. Recovery depends on the strength of the immune system. Many of those who have died were already in poor health.

In the UK, the medical advice is that if you have recently travelled from areas affected by coronavirus, you should:

More NHS advice on what to do if you think you have been exposed to the virus can be found here, and the full travel advice to UK nationals is available here.

China’s national health commission confirmed human-to-human transmission in January, and there have been such transmissions elsewhere.

As of 9 March, more than 110,000 people have been infected in more than 80 countries, according to the Johns Hopkins University Center for Systems Science and Engineering.

There have over 3,800 deaths globally. Just over 3,000 of those deaths have occurred in mainland China. 62,000 people have recovered from the coronavirus.

We don’t yet know how dangerous the new coronavirus is, and we won’t know until more data comes in. Seasonal flu typically has a mortality rate below 1% and is thought to cause about 400,000 deaths each year globally. Sars had a death rate of more than 10%.

Another key unknown is how contagious the coronavirus is. A crucial difference is that unlike flu, there is no vaccine for the new coronavirus, which means it is more difficult for vulnerable members of the population – elderly people or those with existing respiratory or immune problems – to protect themselves. Hand-washing and avoiding other people if you feel unwell are important. One sensible step is to get the flu vaccine, which will reduce the burden on health services if the outbreak turns into a wider epidemic.

Severe acute respiratory syndrome (Sars) and Middle Eastern respiratory syndrome (Mers) are both caused by coronaviruses that came from animals. In 2002, Sars spread virtually unchecked to 37 countries, causing global panic, infecting more than 8,000 people and killing more than 750. Mers appears to be less easily passed from human to human, but has greater lethality, killing 35% of about 2,500 people who have been infected.

By Friday morning, Spain had confirmed 3,754 cases of the coronavirus – 2,000 of them in and around the capital – and the mayor of Madrid had called for the closure of cafe terraces and shuttered children’s play areas. He warned that a lockdown of the city could not be ruled out.

Face masks and gloves are becoming occasional accessories on the Madrid metro. Many of the capital’s Chinese-run grocery shops and bazaars have paused trading through fear of contagion and a slump in shopper numbers, while supermarkets are enjoying a roaring trade as families stock up on food to see them through a school closure scheduled – in theory at least – to last a fortnight.

The city’s big cultural draws are out of bounds to locals and visitors, with the Prado, Reina Sofía and Thyssen-Bornemisza musuems closing their doors until further notice.

In place of the habitual crowds outside the Prado on Thursday afternoon lounged a handful of people and four police officers mooching around their patrol cars.

A stall-holder who has made his living selling pictures in gaudy frames opposite the museum for the past 20 years had decided to call it a day by 4.45pm. 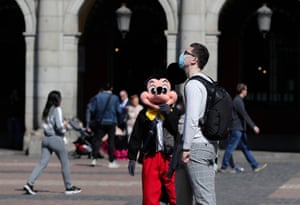 “The number of tourists has dropped by half since they closed the museum,” he said. Still, he added, the situation would improve eventually. “All this will pass and things will be OK again. The situation will change.”

Gran Vía, one of the city’s main thoroughfares, was far quieter than usual, its normally bustling McDonald’s decidedly calm.

A few minutes’ walk away, the Puerta del Sol – famed for its Tio Pepe sherry sign and as the focus for Madrid’s New Year’s Eve festivities – still echoed with the sound of the odd wheelie case, but the mood was subdued and the individuals in animal and Disney costumes appeared to have gone home in the absence of tourists with whom to pose for pictures.

As the pandemic stretches on, the mixed metaphors of the hotel owner’s association do not seem all that far-fetched. “A tsunami has arrived,” Ramón Estalella of the Confederation of Spanish Hotels told Reuters on Thursday. “A meteorite has fallen on us and we have to see how we survive.”

His bleak appraisal was endorsed by someone who knows a thing or two about intergalactic peril. As he wandered, a little disconsolately, down Calle Preciados, Buzz Lightyear – or rather the young Peruvian man inside the costume – offered his thoughts.

“Business has gone down a lot,” he said. “It started to drop off about two weeks ago. The tourists have gone away and now it’s just Madrileños. I used to work from 5pm til 10pm, and earn about €40 or €50. But I’ve been working since 9am today and I’ve only made €5.”

The idea of coming to Spain, he added, was to send money back to Peru: “But I don’t have any money to send.”

The first two bullfights of the season have been cancelled at the city’s Las Ventas bullring and there were no tourists to study its Neo-Mudéjar splendour, or to visit the nearby statue of Alexander Fleming, saviour of many a gored torero thanks to the discovery of penicillin.

Animal rights campaigners have been celebrating the cancellation. The coronavirus is nothing if not an equal opportunities infector.

The two most senior leaders of the far-right Vox party, a staunch defender of bullfighting, have tested positive for the virus, and the party has apologised for holding a 9,000-person rally in Madrid last Sunday.

Meanwhile, two members of the socialist-led coalition government – including its equality minister, Irene Montero – have also contracted the virus, and the administration has been accused of putting politics before public health by allowing large International Women’s Day events to go ahead on 8 March.

Montero’s diagnosis also led to King Felipe and Queen Letizia being tested after the queen participated in a joint event with the minister last Friday. The tests were negative. 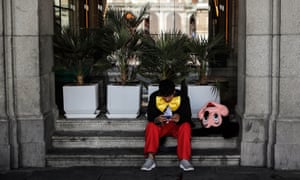 In Madrid’s Retiro park, once home to a royal palace, a children’s play area was taped off and the boating lake had been commandeered by gulls while the rowboats bobbed in their chains.

Sitting by the lake, close to a living statue in full Predator costume and a brave soul in an outsized Panda suit, sat a phlegmatic busker in a huge sombrero. Despite his songs and mariachi hat, the singer was not Mexican. “I’m from Honduras – it’s close enough,” he said.

Nor was he worried about the disease encircling the city. “Things aren’t so bad yet,” he said as he tuned his guitar. “You just have to trust in God. And anyway, it’s like the Bible says, ‘For dust thou art and unto dust shalt thou return’.”