Catholic nurse, 61, who was bullied out of her job for wearing a cross around her neck at work was unfairly dismissed, employment tribunal rules

A Catholic nurse who was bullied out of her job for wearing a cross around her neck at work was unfairly dismissed by the hospital where she had worked for 18 years, an employment tribunal has ruled.

NHS theatre practitioner Mary Onuoha claimed that she had faced a ‘campaign of harassment’ by bosses at Croydon University Hospital to make her remove the small gold cross.

A tribunal found that although the hospital claimed there were health and safety policies behind their demand, this was inconsistent with the treatment of other staff who wore similar items of clothing and jewellery.

The panel found in her favour and ruled that she was forced to quit her role in 2020 after her employers created ‘an offensive, hostile and intimidating environment’.

The hospital trust has since issued an apology to Mrs Onuoha and said their dress code and uniform policy has been updated since the matter was raised.

Mrs Onuoha had been a staff member for 18 years but had worn the jewellery for 40 years to mark her devout Catholic faith.

But from 2015, she claims a succession of managers told her to remove the item from around her neck or the matter would face ‘escalation’.

She claimed patient safety was risked in an operating theatre to discipline her and her head of department even said he would have to call security if she wore it in a clinical area. 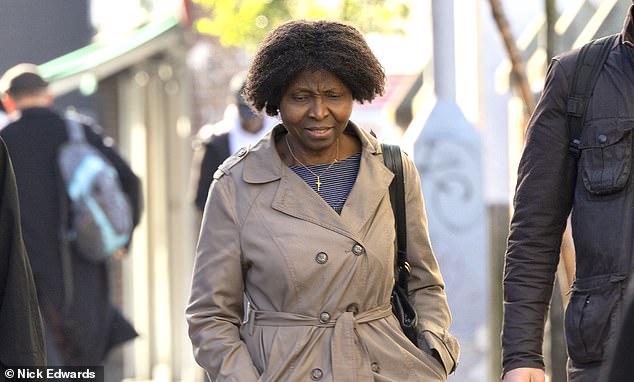 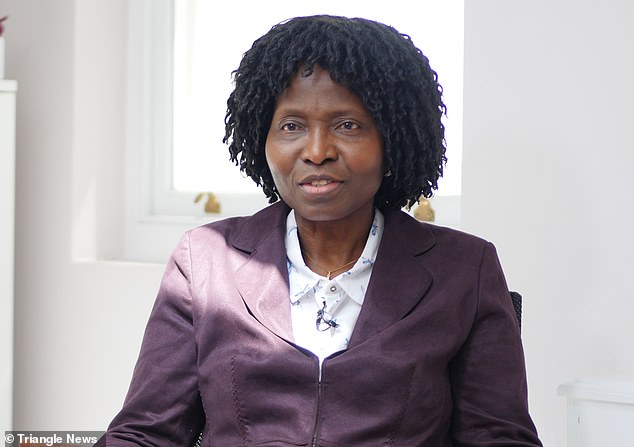 Mrs Onuoha was told her small gold cross was a health and safety risk and ‘must not be visible’.

She claimed patient safety was risked in an operating theatre to discipline her and her head of department even said he would have to call security if she wore it in a clinical area.

When she continued to refuse to remove the cross, she was suspended from clinical duties and demoted to working as a receptionist which left her feeling humiliated.

The tribunal heard she was forced off work with stress in June 2020 and believed she faced no alternative but to resign later that year.

She had been employed as a theatre practitioner wearing blue scrubs – a V necked short sleeved tunic and trousers on the bottom.

In theatre working as a scrub nurse, she also wore a standard issue surgical covering which covered her from neck to wrist. 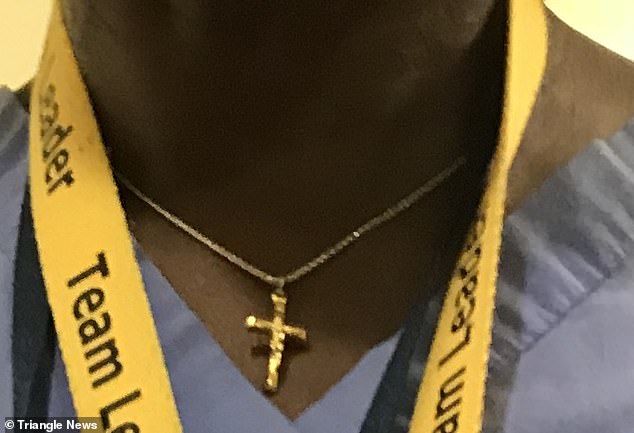 Pictured: Mrs Onuoha says she has worn the gold cross as a reflection of her faith for 40 years

Her cross necklace was visible when wearing scrubs but was covered when working as a scrubbed in nurse in theatre.

The tribunal said Mrs Onuoha, who grew up in Nigeria, is a devout Catholic and that wearing a cross is important to manifest her faith.

She said: ‘This has always been an attack on my faith. My cross has been with me for 40 years. It is part of me, and my faith, and it has never caused anyone any harm.

‘At this hospital there are members of staff who go to a mosque four times a day and no one says anything to them. Hindus wear red bracelets on their wrists and female Muslims wear hijabs in theatre.

‘Yet my small cross around my neck was deemed so dangerous that I was no longer allowed to do my job. I am a strong woman but I have been treated like a criminal.’

Lawyers for Mrs Onuoha claimed health and safety reasons were contradictory because she was required to wear several lanyards round her neck while working at the hospital.

An employment tribunal panel did not agree with the hospital that there were health and safety grounds for asking Mrs Onuoha to remove the necklace. 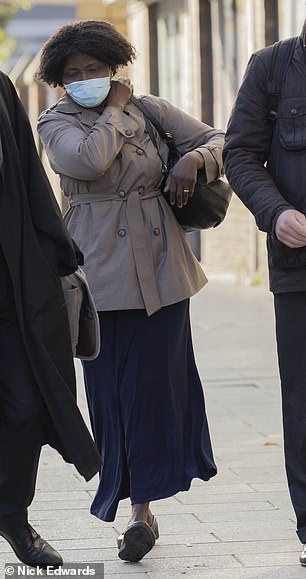 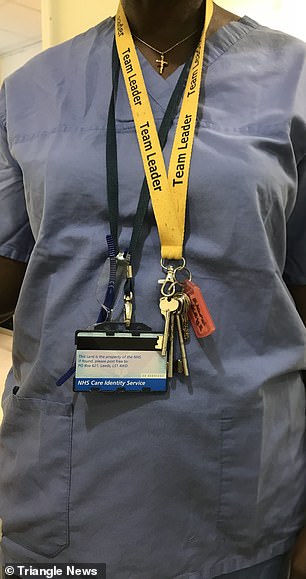 The tribunal ruled: ‘It is clear to us that the infection risk posed by a necklace of the sorts the Claimant used to wear, when worn by a responsible clinician such as the Claimant, who complied with handwashing protocol, was very low.’

The Tribunal have also found that Croydon Health Services NHS Trust constructively dismissed Mrs Onuoha and that the dismissal was unfair and discriminatory.

Furthermore, it has ruled that there was ‘no cogent explanation’ as to why other items of jewellery and clothing were permitted ‘but a fine necklace with a small pendant of religious devotional significance is not’.

Finding that there was ‘an offensive, hostile and intimidating environment, the Tribunal concluded that interrupting the surgery while a patient was on the table was ‘high-handed’, adding: ‘She literally interrupted surgery in order to address the issue.

‘This was to treat the matter as if it was an emergency, but on any view it was not.’

Finding that Mrs Onuoha was constructively dismissed, the tribunal concluded: ‘In our view the conduct which we have identified as amounting to harassment and/or direct discrimination individually or cumulatively was sufficiently serious so as to be likely to destroy or seriously undermine the relationship of trust and confidence. 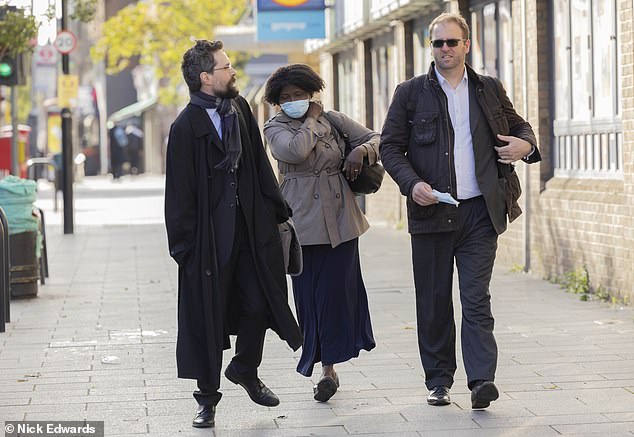 ‘We do not accept that the Respondent had reasonable and proper cause for its conduct.

‘There was a broad health and safety objective underlying much of the conduct. However, given the inconsistency of treatment between employees wearing other items of religious and non-religious apparel that had no work-based function but had a comparable risk profile, that simply did not justify the treatment of the Claimant.

A remedy hearing will take place at a later date.

A spokesperson for Croydon Health Services NHS Trust said: ‘We would like to apologise to Mrs Onuoha and thank the Employment Tribunal panel for their careful consideration of this matter.

‘It is important that NHS staff feel able to express their beliefs, and that our policies are applied in a consistent, compassionate and inclusive way.

‘Since this matter in 2019, our dress code and uniform policy has been updated with the support of the Trust’s staff networks and trade union representatives to ensure it is inclusive and sensitive to all religious and cultural needs, while maintaining effective infection prevention and control measures and protecting the safety of our patients and staff.

‘However, we will carry out a further review of our policy and practices in light of this judgment.’

Andrea Williams, chief executive of the Christian Legal Centre, who supported the claim, said: ‘We are delighted that the Tribunal have ruled in Mary’s favour and delivered justice in this case.

‘From the beginning this case has been about the high-handed attack from the NHS bureaucracy on the right of a devoted and industrious nurse to wear a cross – the worldwide, recognised and cherished symbol of the Christian faith. It is very uplifting to see the Tribunal acknowledge this truth.

‘It was astonishing that an experienced nurse, during a pandemic, was forced to choose between her faith and the profession she loves.

‘Any employer will now have to think very carefully before restricting wearing of crosses in the workplace.

‘Mary’s whole life has been dedicated to caring for others and her love for Jesus. It has been a privilege to stand with her in this long fight for justice, and we are very pleased with the outcome.’