Kate and Gerry McCann ‘still fervently hope that Madeleine will be found alive’: Parents speak out after German prosecutors revealed they ‘think she is dead’ while naming paedophile as new suspect

Madeleine McCann’s parents ‘still continue to hope’ their daughter is alive despite a German prosecutor saying police believe she is dead, their spokesman said today.

Kate and Gerry McCann are being comforted at home in Rothley, Leicestershire, by close relatives and being kept updated on developments by Scotland Yard officers.

It comes as a new suspect, German sex offender Christian Brueckner, is now being linked to the girl’s abduction in 2007 in Portugal in a ‘significant breakthrough’. 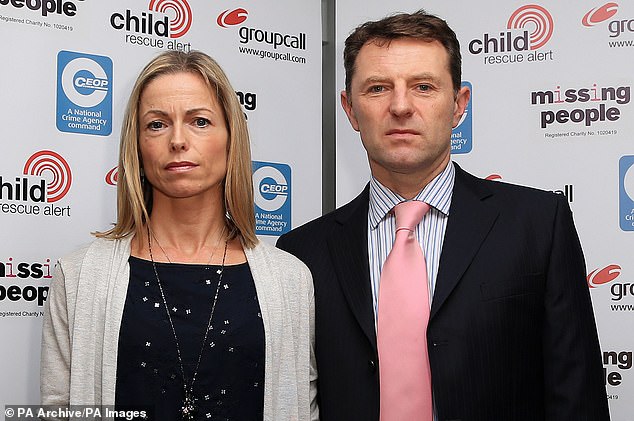 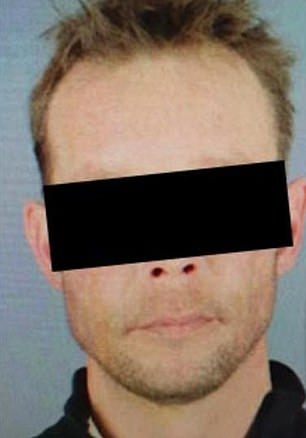 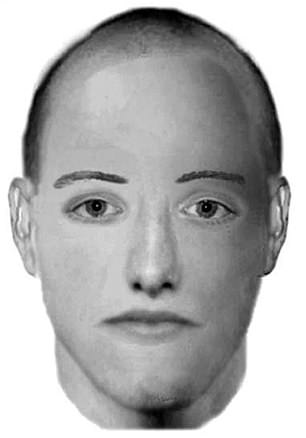 Christian Brueckner (left) is the new key suspect in the Madeleine McCann case. In 2013 police released a photofit (right) of a man seen lurking near the McCanns’ apartment

McCann family spokesman Clarence Mitchell told MailOnline: ‘German police say they are assuming that Madeleine is dead but they have no proof. British police are keeping an open mind and Portuguese police are reacting with caution too.

‘So Kate and Gerry still fervently hope that Madeleine will be found alive despite everything that appears to be happening. They continue to hope she is alive until they can be shown incontrovertible evidence which proves that she is not.’

He added: ‘But they are being realistic and simply want to know what has happened to their daughter and establish the truth, and for those responsible to be brought to justice.

‘They will wait to hear what the police tell them. They want a resolution and after all these years they want peace.’

At a press conference in Braunschweig today, a prosecutor’s office spokesman confirmed that the 43-year-old jailed rapist is being investigated for murder. 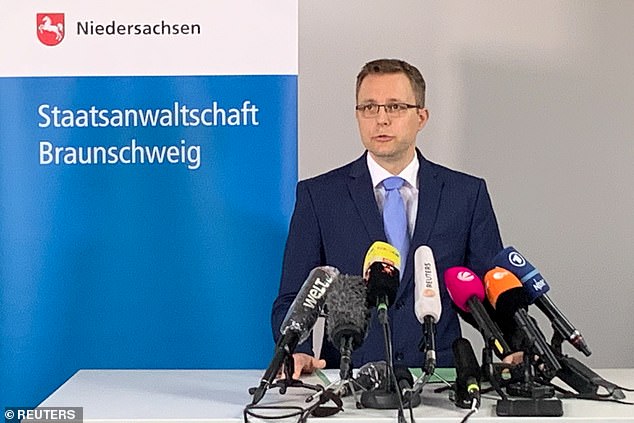 Hans Christian Wolters, a spokesman for the Braunschweig Public Prosecutor’s Office, said today that German authorities are ‘assuming that the girl is dead’ 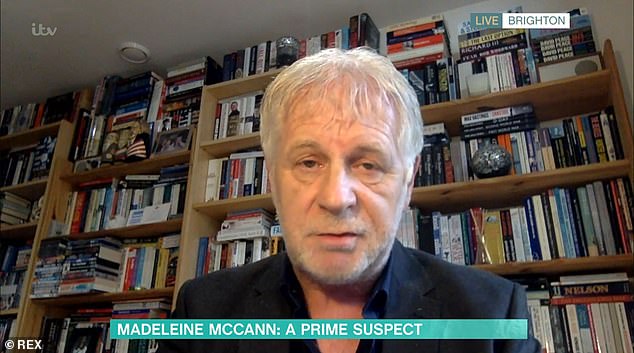 Mr Mitchell said that of ‘all the thousands of leads in the past nothing is as clear cut as this latest one,’ adding: ‘Three police forces are saying he is the key suspect. It is the most significant development.’

A friend of heart doctor Mr McCann, 51, and former GP turned medical worker Mrs McCann, 52, said the couple had ‘mixed emotions’ as they await possible news of their daughter’s fate after more than 13 years.

The friend said: ‘It’s a difficult and nerve wracking time for them and the whole family. Of course they want to find Madeleine alive but after all this time they just need answers.’

Former headteacher Brian Kennedy, 80, Mrs McCann’s uncle who lives in the same village as them, has been to visit the couple and their 15-year-old twins Sean and Amelie to offer some ‘support and comfort’.

It is understood Mr McCann has had time off work from Leicester’s Glenfield Hospital as the family remain behind closed doors. 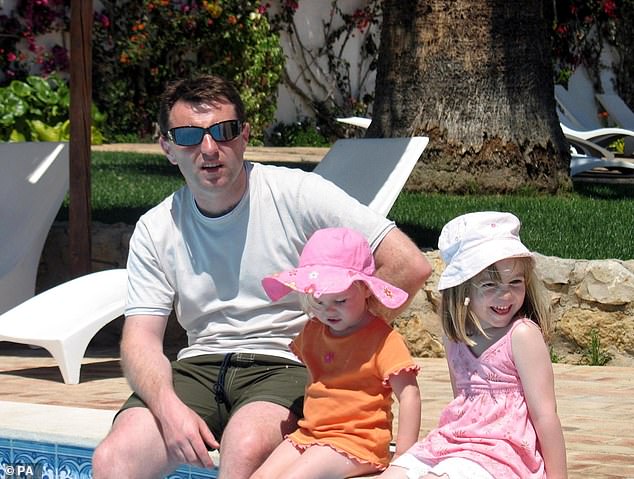 The last photograph taken of Madeleine McCann shows her smiling next to her little sister Amelie and their father Gerry at 1.30pm on May 3 in Portugal, the day she went missing

Mr Kennedy said yesterday’s bombshell revelation from the Metropolitan Police had came ‘as much a surprise to us as everyone else.’

Mr and Mrs McCann had been sworn to secrecy and were told not to share any news even with close family, their friend said.

Brueckner is said to be serving a seven-year prison sentence for the rape of a 72-year-old American woman in Portugal in 2005.

He is known to have lived on the Algarve coast between 1995 and 2007 and his Portuguese mobile phone received a half-hour phone call in Praia da Luz around an hour before Madeleine, three, went missing.

Hans Christian Wolters, a spokesman for the Braunschweig Public Prosecutor’s Office, said today: ‘In connection with the disappearance of the three-year-old British girl Madeleine McCann on May 3 2007 from an apartment complex in Praia da Luz, in Portugal, the Braunschweig prosecution is investigating against a 43-year-old German on suspicion of murder. We are assuming that the girl is dead.

‘With the suspect, we are talking about a sexual predator who has already been convicted of crimes against little girls and he’s already serving a long sentence.’

He said the man was regularly living in the Algarve between 1995 and 2007, where he worked jobs, including in the gastronomy business, but funded his lifestyle by committing crimes, including thefts in hotel complexes and apartments, as well as drug dealing. 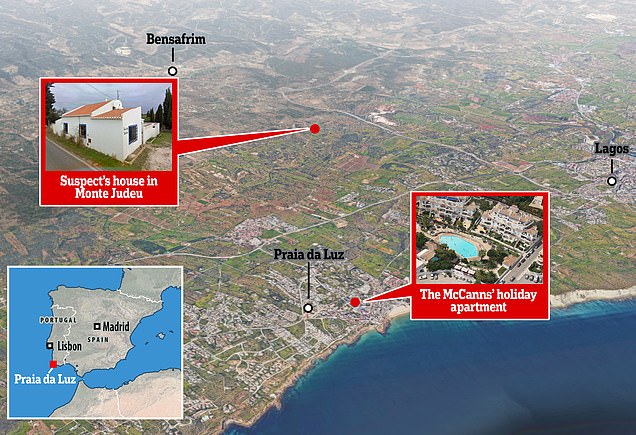 German magazine Der Spiegel reported he was extradited from Portugal in 2017 and initially convicted of drug trafficking.

Mr Hoppe said German police have not ruled out a sexual motive for the alleged crime against Madeleine. 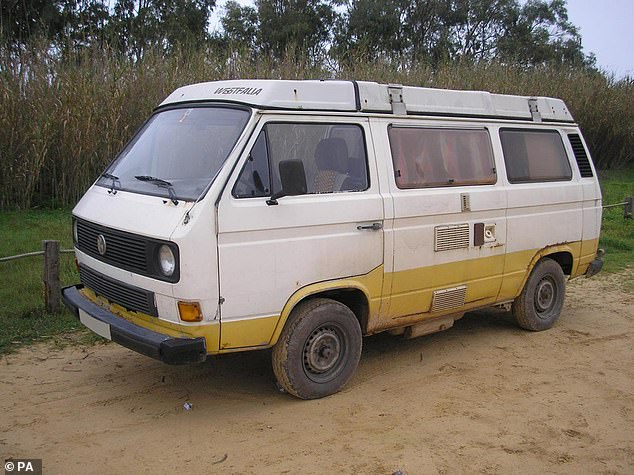 The suspect’s battered camper van. Scotland Yard released images of the VW T3 Westfalia van, with a white upper body and a yellow skirting, with a Portuguese registration plate

He added that the suspect may have broken into an apartment in the Ocean Club complex – where Madeleine was on holiday with her parents, Kate and Gerry McCann, and her twin siblings Sean and Amelie – before spontaneously kidnapping her.

A BKA appeal said: ‘There is reason to assume that there are other persons, apart from the suspect, who have concrete knowledge of the course of the crime and maybe also of the place where the body was left.’

Scotland Yard said the suspect has been linked to an early 1980s VW T3 Westfalia camper van – with a white upper body and yellow skirting, registered in Portugal – which was pictured in the Algarve in 2007.

He is believed to have been driving the vehicle in the Praia da Luz area in the days before Madeleine’s disappearance and is thought to have been living in it for days or weeks before and after May 3. 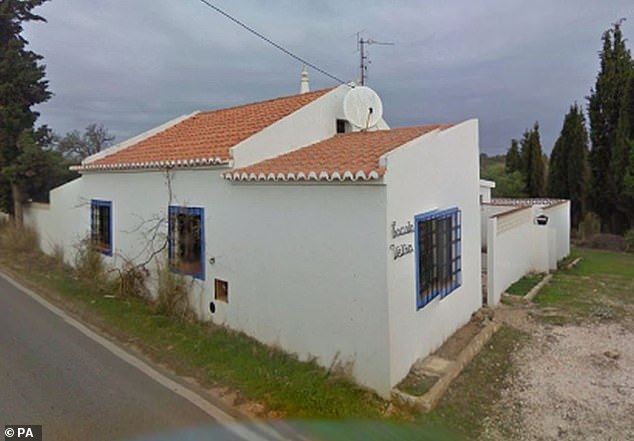 The day after Madeleine went missing, the suspect had the car re-registered in Germany under someone else’s name, although it is believed the vehicle was still in Portugal.

Both vehicles have been seized by German police, who said there is information to suggest the suspect may have used one of them in an offence.

The BKA is also appealing for other potential victims to come forward.

Scotland Yard has launched a joint appeal with the BKA and the Portuguese Policia Judiciaria (PJ), including a £20,000 reward for information leading to the conviction of the person responsible for Madeleine’s disappearance. 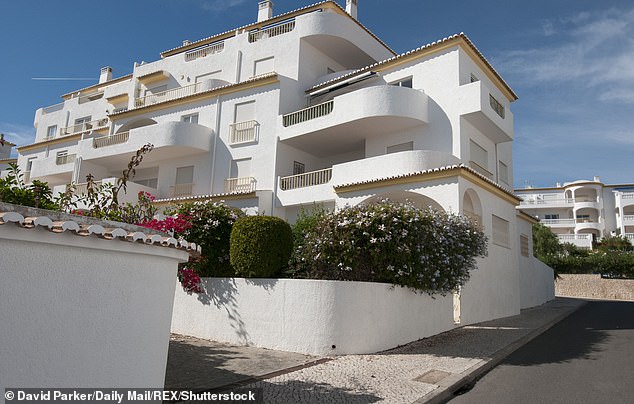 The Ocean Club in Praia Da Luz, where Madeleine disappeared on May 3, 2007, during a family holiday with her parents and younger twin siblings

The Met’s investigation has identified more than 600 people as potentially significant and was tipped off about the German national, already known to detectives, following a 2017 appeal 10 years after she went missing.

She vanished shortly before her fourth birthday and would have turned 17 last month.

The Met’s Operation Grange, which had received £12.3 million in funding up to April since it was launched in 2013, still considers the case a missing person inquiry.

Detectives said there is no ‘definitive evidence whether Madeleine is alive or dead’.

Downing Street said the latest developments appeared to be significant and added that Number 10’s thoughts were with the McCann family ‘who have had to endure so much’.