Giving birth in the middle of a pandemic is a bizarre experience for any woman.

But things took an even stranger turn for one new mother when the Duchess of Cambridge appeared on a screen at her bedside for a cheery post-natal chat.

Kate gushed her congratulations to Rebecca Attwood and took great interest in how the birth had gone during a morale-boosting ‘virtual’ return visit to the NHS maternity unit where she previously spent two days on a work placement.

‘Hello! Very nice to meet you,’ said Kate from her Anmer Hall home in Norfolk. ‘This is definitely a first, I think! Huge congratulations.’

After being told that Rebecca’s son Max had arrived at 10pm the previous night, she exclaimed: ‘My goodness, you must be exhausted.’

Rebecca, from Raynes Park in South-West London, said: ‘Having a surprise conversation with the Duchess of Cambridge after two hours’ sleep was particularly surreal.

‘The Duchess asked us about having a baby at such an unusual time, and our experience on the maternity ward was that all the midwives made it as normal as possible – apart from the masks!’

After being told that Rebecca’s son Max (left) had arrived at 10pm the previous night, Kate (right) exclaimed: ‘My goodness, you must be exhausted’

To demonstrate the conditions they are now working under, lead midwife Sam Frewin appeared on the video call wearing a mask and plastic apron. ‘I’m smiling, can you tell?’ she joked.

Taking a closer look, Kate laughed: ‘With your eyes, I can.’

Footage of the call to Kingston Hospital, South-West London, where the Duchess worked last November, has been released to highlight mental health issues that can affect new mothers.

Kate asked the midwives: ‘What are the main concerns that mothers and potential mothers feel?’

Jo Doumouchtsi, a mental health midwife, told her there had been an increase in referrals for anxiety and extra worries about catching Covid-19 while in hospital. 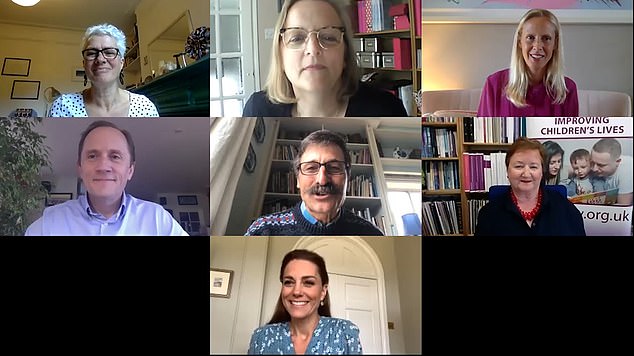 ‘There are women that have no mental health history that are becoming incredibly anxious because of the situation currently,’ she said.

The Duchess asked midwives Jennifer Tshibamba and Devica Ireson: ‘How are you and your families? Are you managing? Are you OK?’

Jennifer, who works in the antenatal and newborn screening team, replied: ‘The workload is the same but I think women are surprised our services are still available.

In a podcast about motherhood earlier this year, the Duchess spoke with candour about her own struggles following childbirth, saying: ‘The challenge is when you’re then sent home with your newborn baby, particularly as a first-time mother, you’re like, ‘Oh my goodness, am I OK to do this?’ ‘

Maternal Mental Health Awareness Week begins tomorrow to highlight the fact one in ten mothers experience problems during pregnancy or in the first year after birth.

Seven in ten women who suffer are thought to hide or underplay the severity of the issue.

by Jo Macfarlane for the Mail On Sunday

Princess Charlotte hasn’t just inherited a sense of public service from her mother and her late grandmother – she’s taken their timeless fashion sense too.

After the Duchess of Cambridge yesterday released another picture of her daughter delivering food parcels, more thoughtful in tone than those showing her trademark cheeky grin the previous day, Royal-watchers couldn’t help but notice that her black-and-white Zara dress was following a firm family tradition.

For both Charlotte’s mother and Princess Diana made quite an impression in similar houndstooth designs. 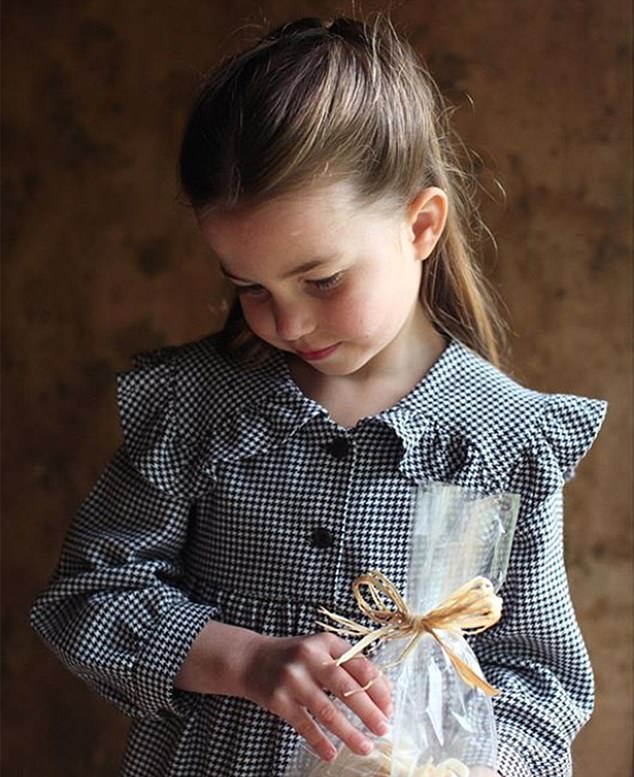 SO SWEET: Princess Charlotte looking pensive in the fifth birthday snap taken by her mother

Kate, 38, took the new, beautifully lit photograph to mark Charlotte’s fifth birthday, snapping away as they delivered home-made pasta to vulnerable households near the Sandringham Estate in Norfolk.

The picture was posted on the Royal Family’s Instagram page with the message: ‘Thank you for all your lovely messages on Princess Charlotte’s fifth birthday!’

Meanwhile, across the Atlantic, Charlotte’s cousin Archie will celebrate his first birthday on Wednesday, with the Duke and Duchess of Sussex in Los Angeles. 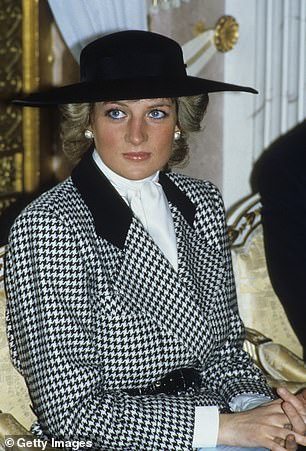 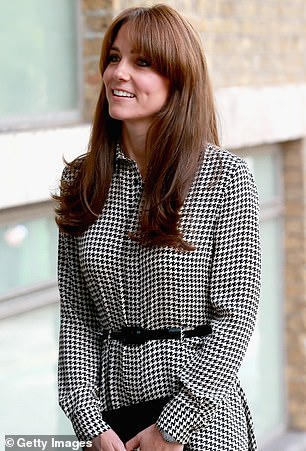 The date signals another poignant milestone – the point at which Archie will have spent more time outside the UK than in it.

The Queen has not seen her youngest great-grandchild in person this year, which has reportedly left her ‘very sad’.

It is understood Meghan and Harry will release a new portrait of their son to mark the occasion.