When a distressed Bill Shorten wondered in an interview on Friday whether Kimberley Kitching would have been better off never going near politics, he was clearly admonishing Labor Party colleagues who he felt had treated his friend badly. He was also quite possibly, in his grief, taking himself to task.

Kitching, who died on Thursday at the age of 52, owed her parliamentary career to Shorten. In September 2016 Stephen Conroy resigned suddenly from the Senate, leaving behind a plum spot in the upper house that belonged to the ALP’s Right faction. As the Right’s most senior member, Shorten used his position as federal leader to propose Kitching. 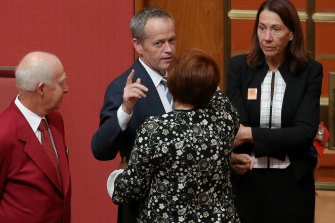 Senator Kimberley Kitching is congratulated by Opposition Leader Bill Shorten after delivering her first speech in the Senate in 2016. Credit:Alex Ellinghausen

To say this was a surprise is to put it mildly. Kitching and her husband Andrew Landeryou were longstanding pals of Shorten and his family. Landeryou had previously attracted public attention by publishing a controversial political news website. Kitching had served as a Melbourne City councillor and worked for the Health Services Union, itself mired in controversy, but had not been a major player in Labor politics.

Her candidacy was either queried or opposed by many of Shorten’s colleagues across the ALP. They simply didn’t think she was up to the task of replacing one of the caucus’s most influential figures. Significantly, Anthony Albanese, still smarting after his failure months earlier to gather sufficient support to mount a leadership challenge to Shorten in the days after the 2016 election defeat, criticised her nomination and its “captain’s pick” foundations.

But the Victorian branch of the ALP could not refuse the federal leader, who was, after all, one of its own; Kitching was endorsed and entered the Senate. With a strong work ethic and an outgoing personality, she quickly established a profile in the Parliament, throwing herself into committee work. A China hawk, especially on human rights issues, and avowedly pro-American, she ran positions that often sat outside the Labor Party’s agreed foreign policy settings.

If the ALP had won the 2019 election under Shorten’s leadership as the polls had suggested, Kitching’s career would probably have gone in a different, more positive direction. But with Shorten gone and Albanese in his place, a new inner circle of frontbenchers was in charge. At the same time, the Victorian ALP splintered further into sub-factions. After the Age’s exposure of rampant branch-stacking, the national executive took over the state branch and within the wreckage new factional alliances were established.

None of these developments were good for Kitching. She told friends she was habitually shunned by some of her Senate colleagues to the point where she felt personally intimidated. She was removed from Labor’s Senate tactics committee and was distressed, according to those friends, that the committee was subsequently not giving her questions to ask during Question Time.

Adding to the stress was the drawn-out uncertainty surrounding her Senate preselection. Until Thursday, all but two sitting Labor MPs around the country had been re-endorsed for the coming federal election. Fellow Victorian Kim Carr, from the party’s Left, is one. Kimberley Kitching was the other. The endorsements for their Senate spots on the Labor ticket were left hanging. With only weeks left before the election is called, no alternative candidates had been proposed.

Only days before she died, Earl Setches from the plumbers’ union, asked a meeting of Right powerbrokers to end the 18 months of uncertainty by endorsing Kitching. They refused. Kitching was said by those who talked to her afterwards to have been devastated.

Labor politics has always been played hard. This was something else. It’s not difficult to understand why Bill Shorten wonders if he did the right thing by his friend in 2016.