Los Angeles is shutting down another public park for so-called “rehabilitation” efforts, signaling a growing problem in major metropolitan areas across the country.

It’s unclear whether the latest plight to clean up Los Angeles’ MacArthur Park will be met with similar controversies seen across the city in the last months. Hundreds of protesters blocked city crews trying to clear a homeless encampment in Echo Park in March and dozens were arrested.

And ironically on the other side of the spectrum, a “safe camping” program meant to protect tents from being removed in Venice Beach drew outcry from residents and vendors alike, as some called for the recall of L.A. City Councilman Mike Bonin over the initiative.

Launching a 2022 mayoral bid centered on addressing the state of homelessness, L.A. City Councilman Joe Buscaino spoke to supporters in Venice Beach in June – before a homeless woman drew a knife feet away, announcing she would start killing people, and several police officers tackled her to the ground.

A fed-up Los Angeles County Sheriff Alex Villanueva butted heads with Bonin again by sending foot patrols to the boardwalk and demanding tents be out by July. The councilman organized efforts to move about 200 homeless people into motels.

L.A. City Councilman Gil Cedillo said that MacArthur Park will be closed starting on Oct. 15 for about ten weeks, as the City’s Department of Recreation and Parks will catch up on necessary maintenance delayed during the coronavirus pandemic, the Los Angeles Times reported. His office counted about 45 tents scattered across 32 acres of the park divided by Wilshire Boulevard on Sept. 29.

Seeking to differentiate his cleanup effort from the contention seen in Echo Park, Cedillo explained that homeless people camping in MacArthur Park were given notice weeks in advance of the closure. Between January and the end of last month, the Los Angeles Homeless Services Authority and the homeless agency PATH had already assisted in relocating more than 160 people from MacArthur Park into shelters or other housing. 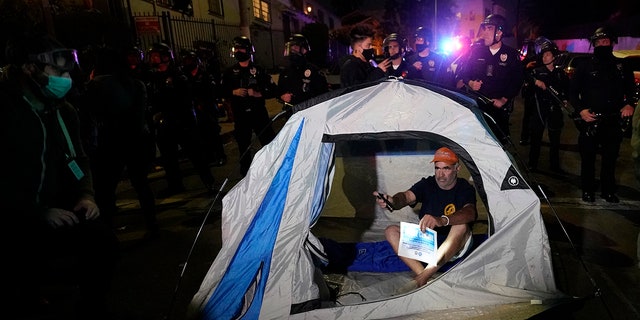 A demonstrator sets up a tent in front of police in the Echo Park section of Los Angeles Thursday, March 25, 2021. Demonstrators gathered to protest the planned temporary closure of a Los Angeles park that would displace a large homeless encampment, which has grown throughout the coronavirus pandemic.

But Jose Rodriguez, deputy district director for Cedillo, told the Times some of that outreach has been deterred by the presence of MS-13 gang members who use extortion and violence to intimidate people visiting what they consider to be their territory.

Meanwhile, an estimated 41,000 people are living on the streets of Los Angeles, a figure that’s expected to rise once eviction moratoriums end. Migrants from Honduras and elsewhere in Central America are known to camp in parks, living among other homeless individuals, some of whom struggle with drug addiction. And the issue expands to public parks across the country in cities including Minneapolis and New York City.

Last month, the city of Denver announced that Civic Center Park would be closed starting Sept. 15, citing “significant public health and environmental health risks that have grown over the past several months.” City officials noted many unsafe conditions, including litter and food waste, a rampant rodent infestation, and human and pet waste which contribute to the spread of disease and impact water quality.

Improperly discarded needles and other drug paraphernalia also were creating risks to people visiting the area and to workers tasked with maintaining the park. Graffiti and fire damage to the historical stone structures will require professional restoration, city officials said.

“The current challenges within Civic Center Park have reached a tipping point, creating conditions that put the public’s health and safety at risk,” Denver Mayor Michael B. Hancock said in a statement. “This cannot and will not be allowed to continue. This is the people’s park and we are taking steps so that everyone can once again feel safe and welcomed there.”

There was no timeline given for how long the park would be closed for the cleanup effort.