Lagos: An explosion at a gas processing plant on Sunday killed at least 15 people and destroyed about 50 buildings after a fire broke out in a suburb of Lagos, Nigeria's commercial capital, emergency services said.

The Nigerian National Petroleum Corporation (NNPC) said the explosion was triggered after a truck hit some gas cylinders stacked in a gas processing plant near the corporation's pipeline in Abule Ado area of Lagos state. 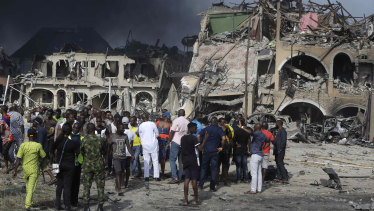 People gather near the site of an explosion in Lagos, Nigeria.Credit:AP

The impact of the explosion led to the collapse of nearby houses, damaged NNPC's pipeline and caused the corporation to halt pumping operations on the Atlas Cove-Mosimi pipeline, the state-owned oil company said in a statement.

Several people were injured and taken to hospital, according to Ibrahim Farinloye, zonal coordinator for the National Emergency Management Agency.

Plumes of smoke billowed into the air as people watched, while firefighters tried to quench the flames, a Reuters witness said. 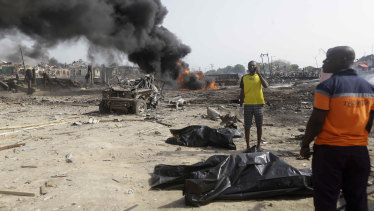 After the blast in Lagos, Nigeria on Sunday.Credit:AP

Farinloye told Reuters that "the explosion destroyed over 50 residential houses."

Pipeline fires in Nigeria, Africa's biggest crude oil producer, are common and they are mostly caused by theft and sabotage. The methods used to steal oil often result in accidents that cause fires.

"The fire started with smoke," one eyewitness said. "The smoke was coming up and later we heard a sound … and some houses collapsed even the roofs."

NNPC said that the temporary shutdown of the petroleum products pipeline would not affect the normal supply of products to the Lagos and surrounding towns.