Last chance saloon: Revellers head out for Friday beers for the final time after Boris Johnson ordered that all pubs will shut tonight to help fight coronavirus

Friday night revellers were drinking in the last chance saloon tonight before Britain’s beer pumps shut off after Boris Johnson announced that pubs will be shut from tomorrow to help fight coronavirus.

There were mixed reactions after the Prime Minister made the ‘heartbreaking’ order to close Britain’s pubs. ‘We’re taking away the ancient, inalienable right of free-born people of the United Kingdom to go to the pub, and I can understand how people feel about that,’ Mr Johnson said.

It comes after the death toll from coronavirus rose to 137 today, with more than 2,600 infected, although experts believe the real figure is more than 10,000.

Jimmy Birch, 35, who was enjoying a beer in Surrey Docks, London, said: ‘I don’t see the point of closing down pubs. There are people travelling in closer proximity on the London underground so surely there is more danger of spreading the virus that way. People need places to go after work and particularly on a Friday evening. I think closing places down is taking it too far when the tube is still running and people are closer to each other.’

Mr Birch and his drinking pal Steven Parry, 34, who are tunnellers working on a sewage project in London, popped into the Surrey Docks pub at Rotherhithe not knowing this would be their last public house visit for some time. 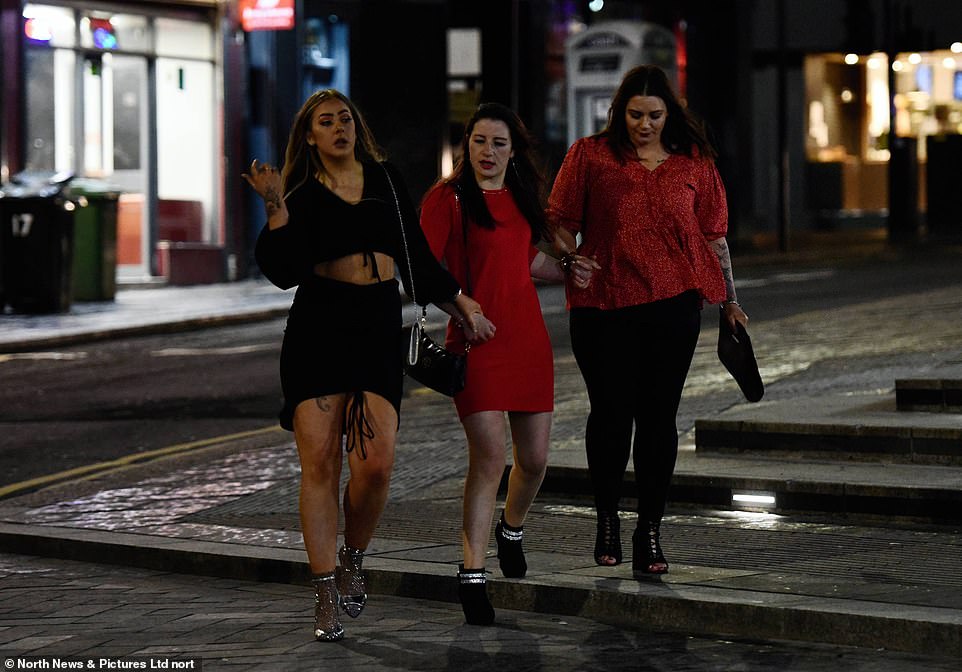 Young women hit the Newcastle strip on Friday night, heading for a drink in the last chance saloon after Prime Minister Boris Johnson announced that all pubs will be closed across the country from tomorrow 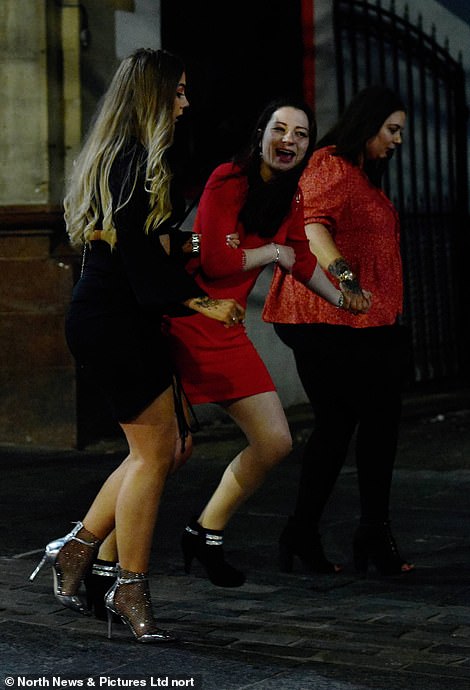 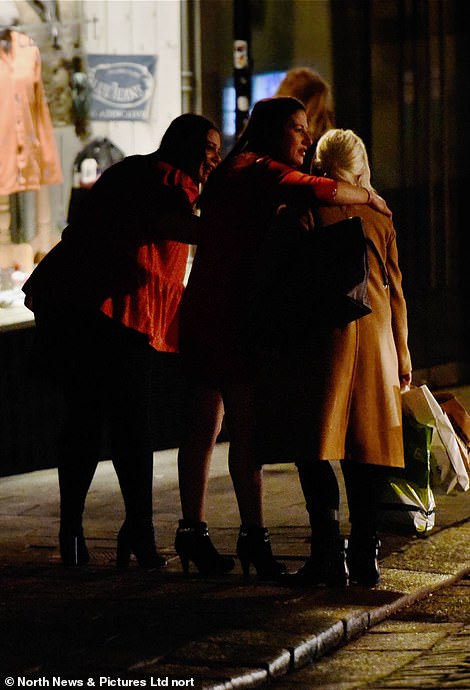 Revellers in Newcastle tonight hit the town for a drink before Mr Johnson’s pub ban come into force. The PM said his ban would be brought it at a ‘reasonable’ hour tonight or tomorrow 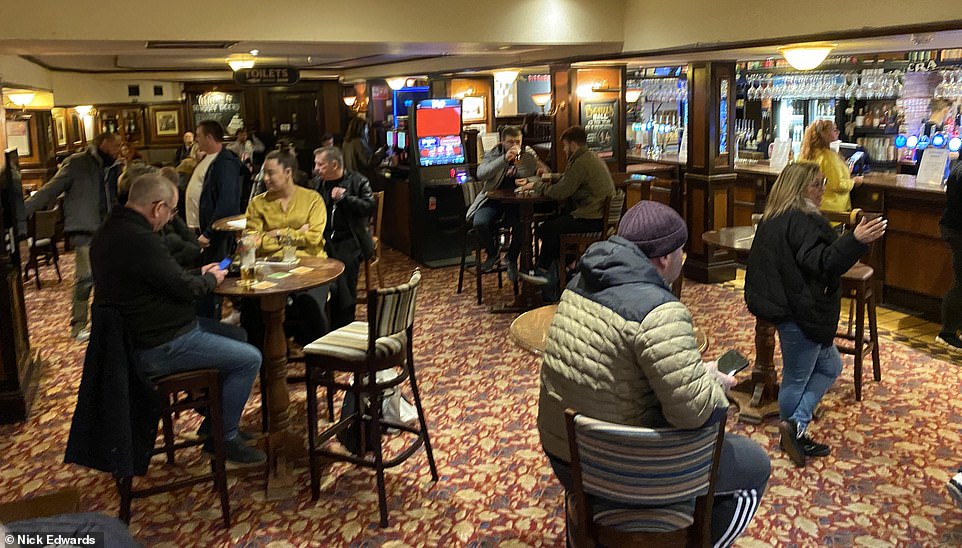 Patrons drinking in the Surrey Docks Pub in Surrey Quays, London on Friday night. Jimmy Birch, 35, who was enjoying a beer, said: ‘I don’t see the point of closing down pubs. There are people travelling in closer proximity on the London underground so surely there is more danger of spreading the virus that way. People need places to go after work and particularly on a Friday evening. I think closing places down is taking it too far when the tube is still running and people are closer to each other.’ 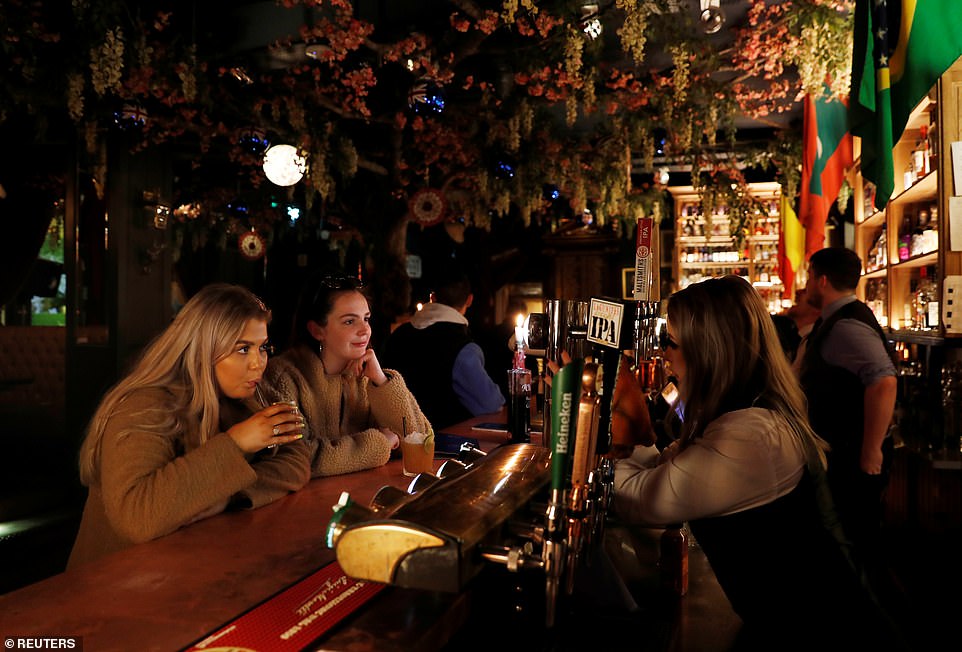 Revellers sip on drinks at a pub in Newcastle tonight after Boris Johnson’s pub ban was announced, it is to come into force tomorrow, so people were making the most of their chance to knock a drink back 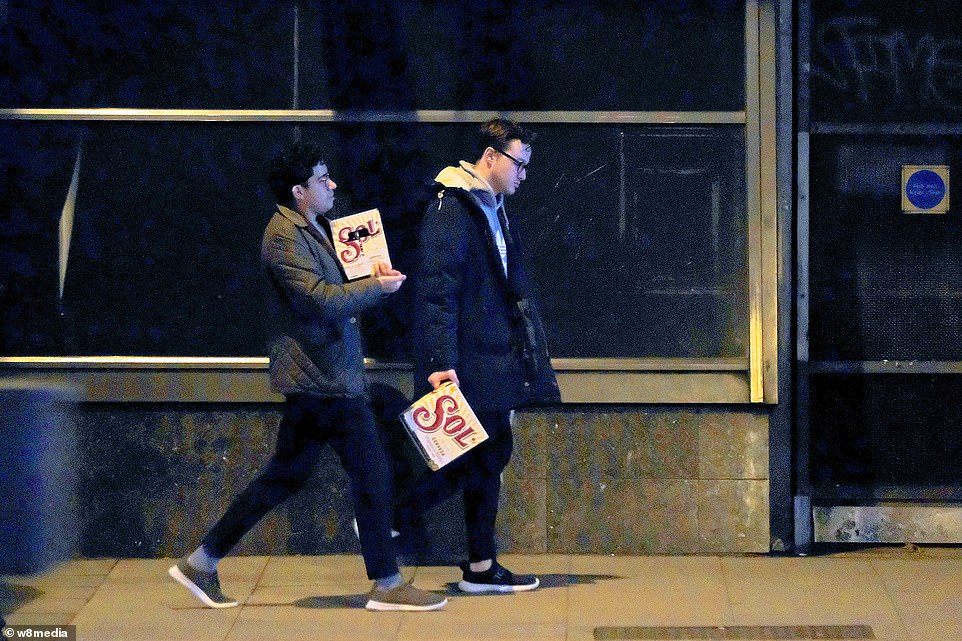 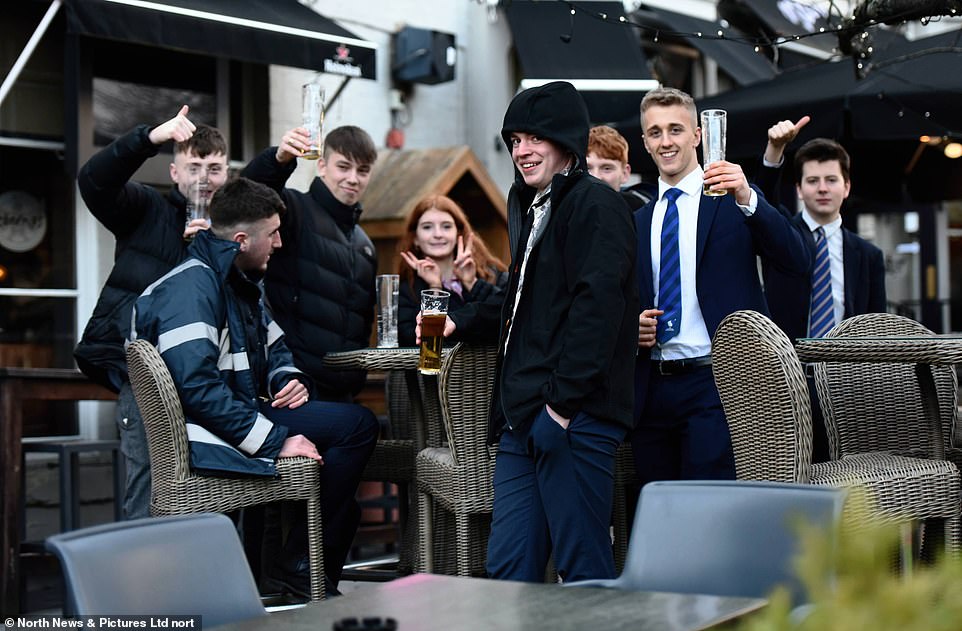 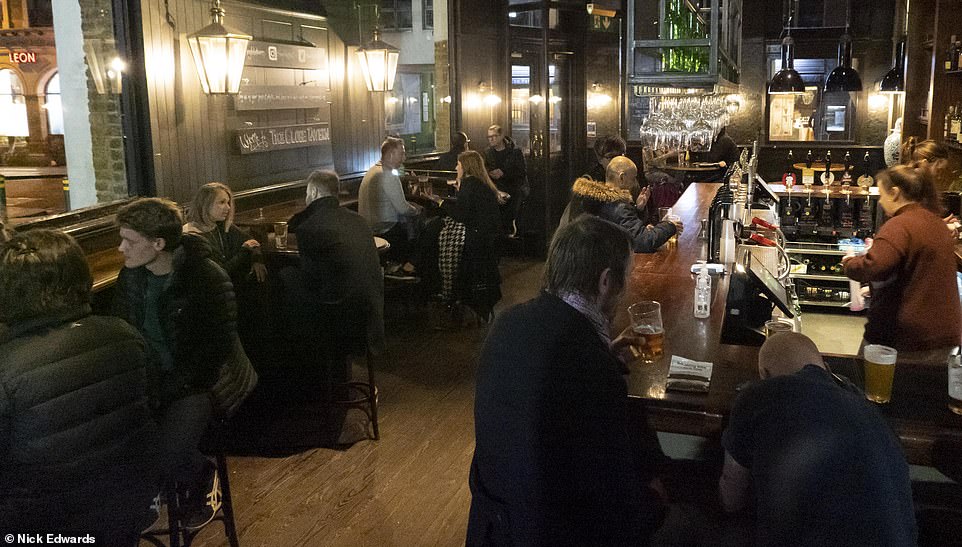 Revellers drinking at the Globe pub in Borough Market on Friday night as Boris Johnson announced: ‘I do accept that what we’re doing is extraordinary: we’re taking away the ancient, inalienable right of free-born people of the United Kingdom to go to the pub, and I can understand how people feel about that … It’s a huge wrench.’

They sipped their pints and watched Mr Sunak and the Prime Minister deliver their unique wages supplement promise as well as calling time on pubs and restaurants.

Mr Parry of Rhis-on-Sea, North Wales, added: ‘It is an incredible thing that they are going to meet peoples’ wages up to 80 per cent. That will help a lot of people who are laid off who lose their jobs. I am separated and have an eight-year-old son and I live and work for him.

‘I need to be certain like millions of others that I can provide for my family. This is a great re-assurance and will make people feel a bit more comfortable for the future.’

Asked about the closure of pubs, he added: ‘We don’t know what is out there so we have to take every precautions that we can. ‘If it helps stop the spread of this virus and helps get it under control, then that is a good thing.’

Meanwhile, patrons in Southampton in Hampshire, said they were having ‘one last wine’ before Prime Minister Boris Johnson’s ban comes into force tomorrow.

Paul Napier, a 46-year-old corporate governance consultant from the city said: ‘I have just spent 13 hours working from home so I thought I would come out for a wine with a friend before it all shuts down for at least three months. This is my last chance.

‘People might say it’s selfish to be coming out now when the advice is social distancing and it probably is.

‘But it has been optional until today – tomorrow it’s compulsory. To be honest, I don’t think I’m putting people at risk. I feel fine, I don’t have a cough and I’ve been using hand sanitiser.’ 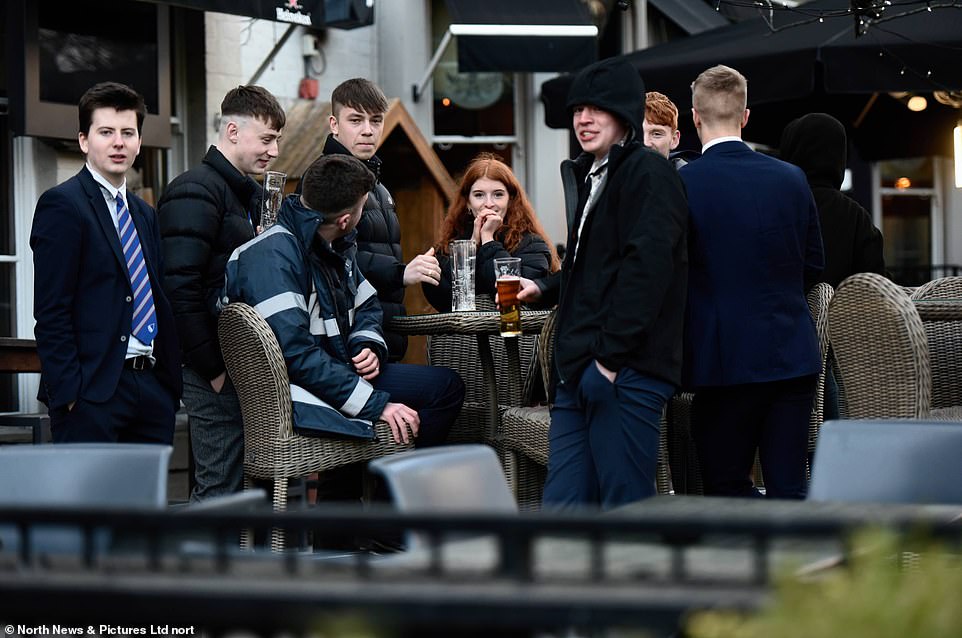 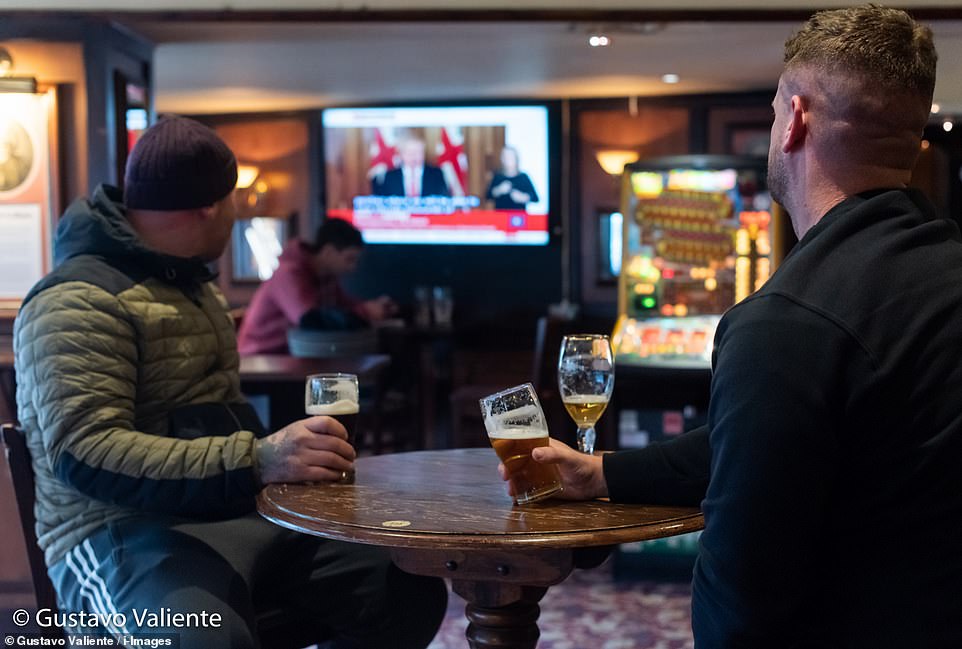 Two men enjoy a pint at Wetherspoon branch The Surrey Docks, while Prime Minister Boris Johnson gives a press conference from Downing Street and orders all pubs, bars and restaurants to shut down tonight nationwide, to battle the spread of the Covid-19 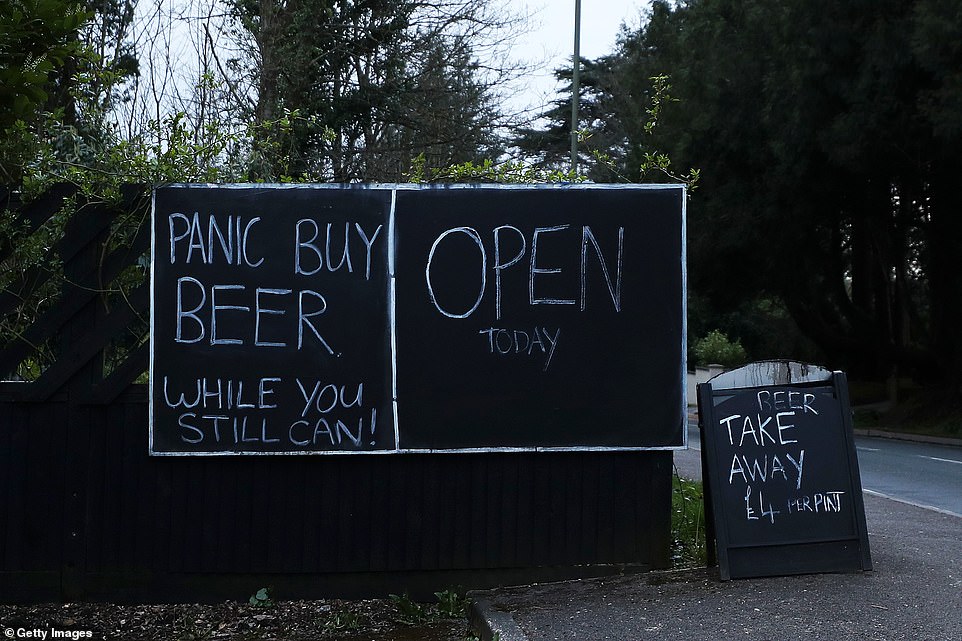 A sign is seen outside a Pub in Burridge reading ‘Panic buy beer while you still can’ on Friday night, with another saying ‘Beer take away £4 per pint’ 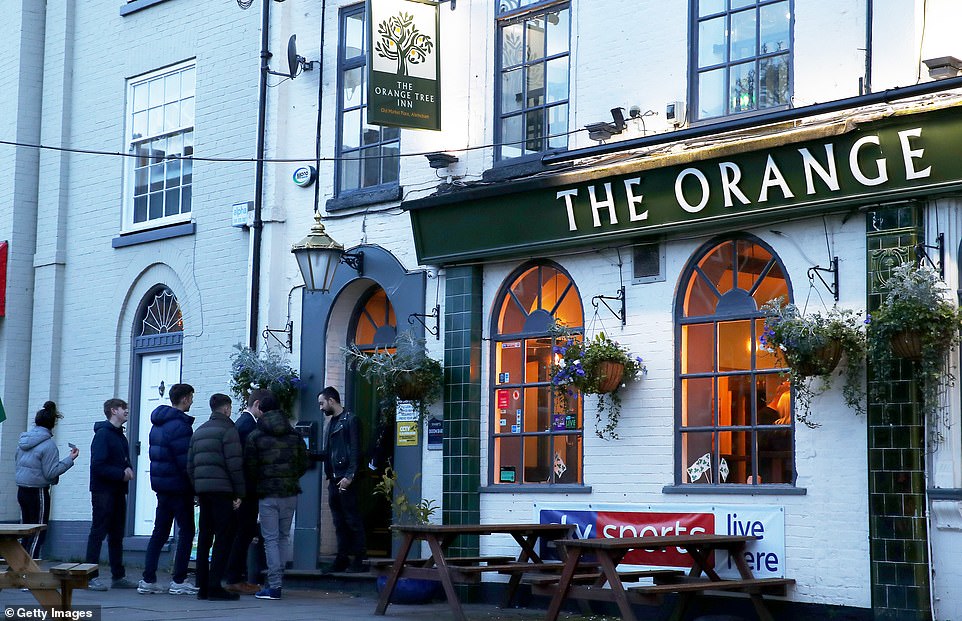 People queue at the door of the Orange Tree pub in Altrincham, Cheshire to have a last drink on Friday night before the new ban on pubs comes into force 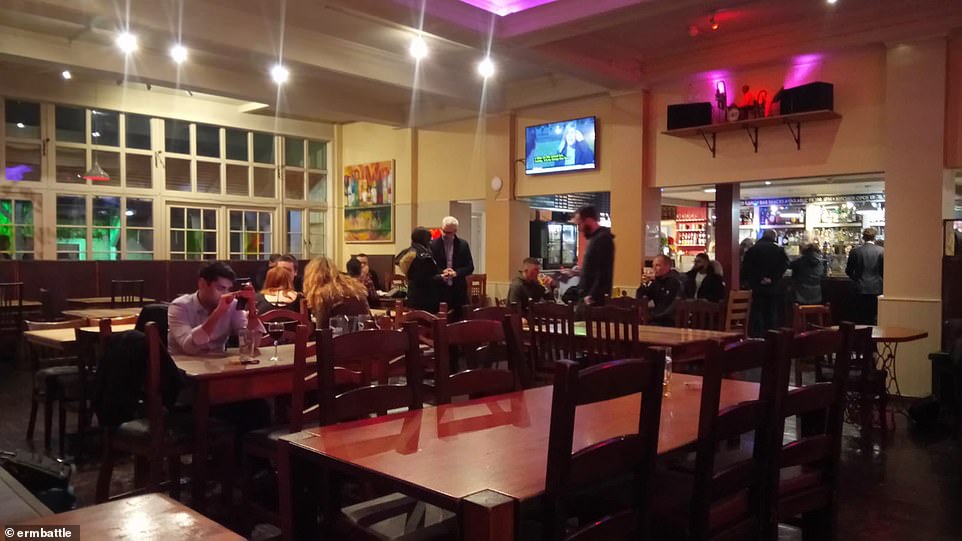 The Gunnersbury on Chiswick High Road in London tonight. One reveller told the MailOnline: ‘F**k it, I’m in the pub man! Here till it closes!’ 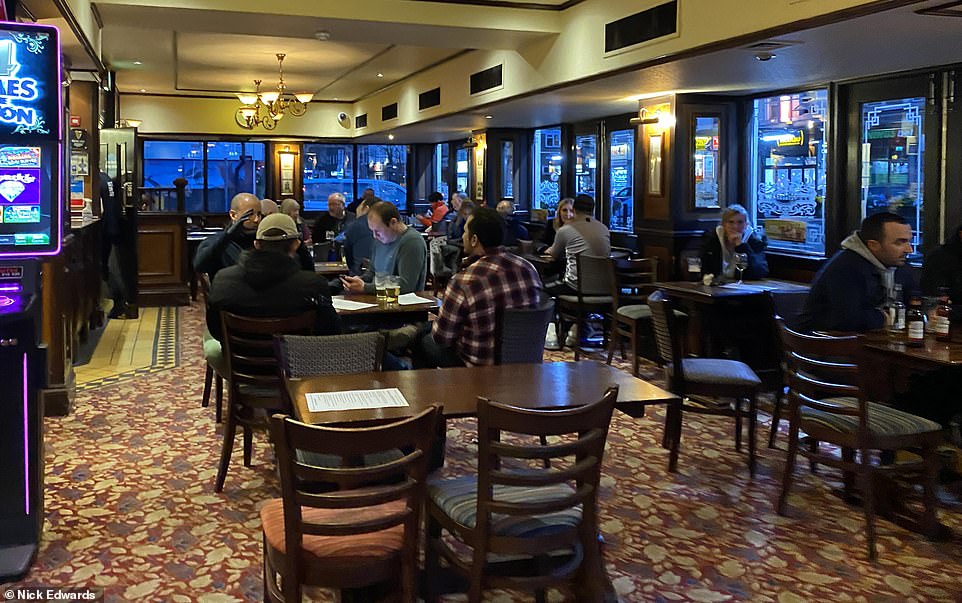 People drink in the The Surrey Docks Pub in Surrey Quays. Pubs have been ordered to close as the UK focuses on the ‘contain’ phase in a desperate effort to ‘delay’ the coronavirus spread 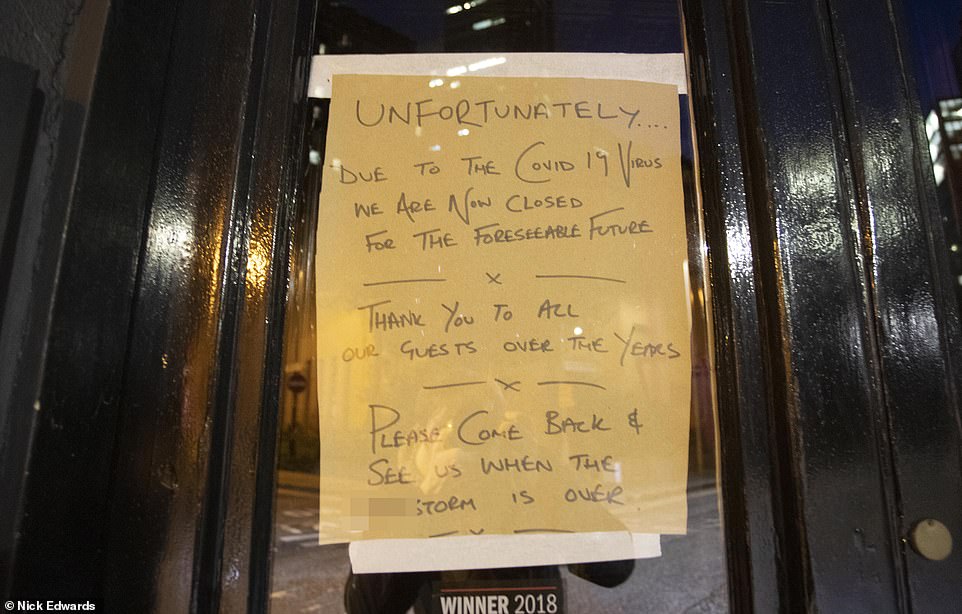 The Rose pub, near London bridge is closed and has a message on the door telling revellers that the venue will be closed for the ‘foreseeable future’ 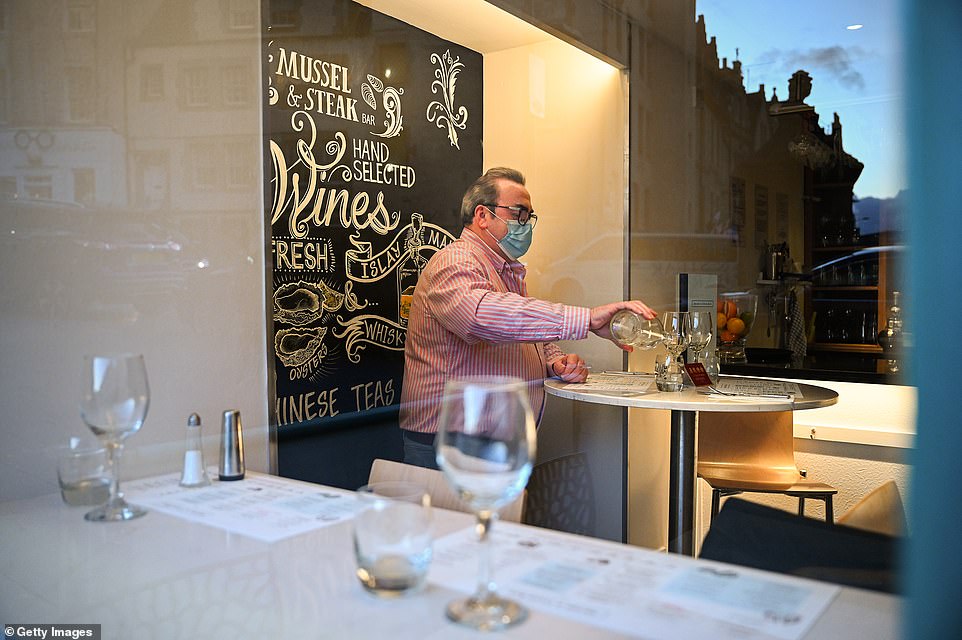 Staff wear face masks at Mussel & Steak restaurant on Friday in Edinburgh. British Prime Minister Boris Johnson announced that the country’s bars, pubs, restaurants and cafes must close tonight to curb the spread of COVID-19, which has killed more than 100 people in the UK

Speaking outside the XOXO wine bar in the city’s trendy Bedford Place area, Mr Napier praised Rishi Sunak’s pledge to cover 80 per cent of workers’ salaries, saying: ‘I think it’s a good measure to help the economy avoid what is potentially a massive recession or even depression.

‘I think it will save jobs as firms would otherwise feel they had to lay people off who would be away from work for 12 weeks and making them no money.

‘This is a crisis and it’s a good short team measure, though we will feel it in the long term.’

Fellow drinker Jimmy Williams, a 32-year-old working in sales was also pleased with the announcement.

He said: ‘I think it’s a large positive and will give a lot of people a bit of relief. Even if it’s not the full amount it will give them enough to live on and I think it will encourage employers and help save people’s jobs.

‘I’m getting paid to work from home and feel I can do that effectively but that’s not the case for everyone.

‘Closing pubs is a big move. This is a big change in people’s lives.’ 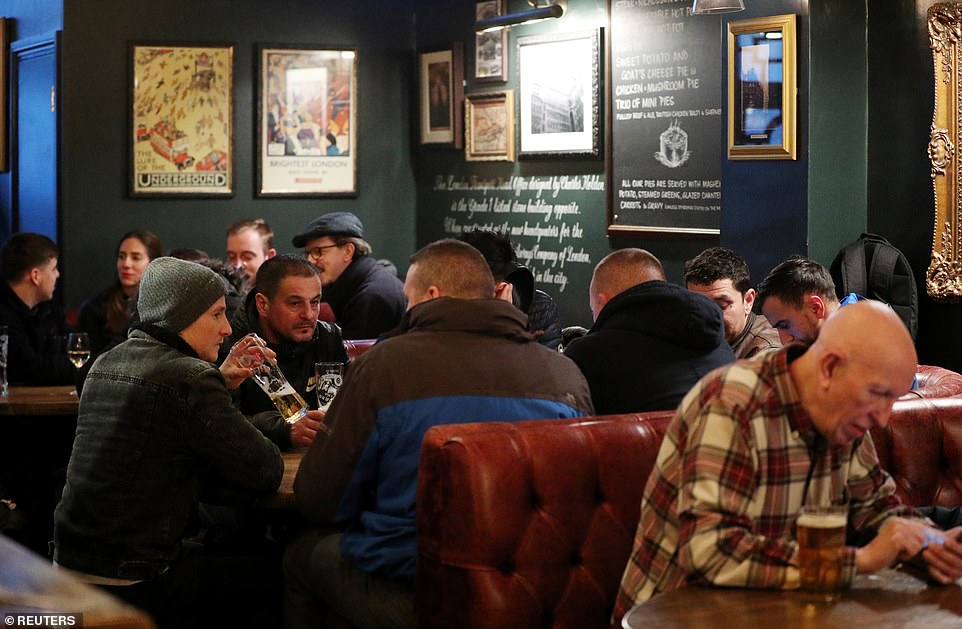 People in a pub after Britain’s Prime Minister Boris Johnson annouced that cafes, pubs and restaurants across the country to close on Friday night to help stop the spread of the coronavirus disease (COVID-19) in Westminster, London 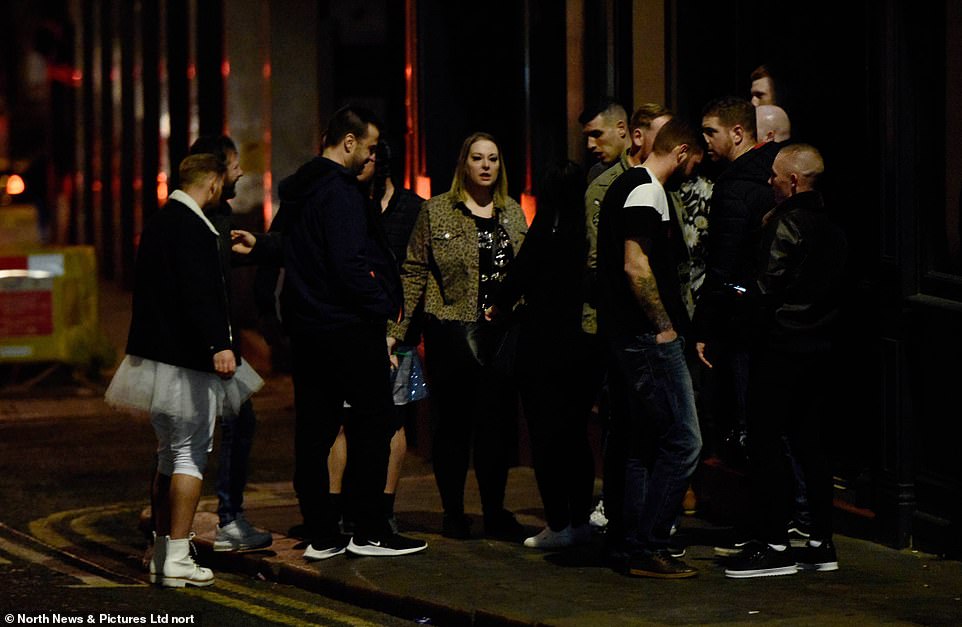 Drinkers at the Isambard Brunel Wetherspoons in Portsmouth tonight expressed their ‘upset’ at the pub closures – with one former sailor claiming the measures are ‘draconian’.

Ex-Able Seaman Dave Matthews, 54, made a 200-mile trip journey from Staffordshire to Portsmouth for a Royal Navy reunion tomorrow which is now likely to be cancelled.

Mr Matthews, who works for Jaguar and is from Staffordshire, said: ‘It’s a bit upsetting, we’re not sure what’s going to happen now. I think the government could have done it yesterday or the day before to give us a bit of notice.

‘We’re waiting to hear to see if we can go ahead or we’ll have to travel back. We weren’t expecting it to be so draconian in measures… It’s going to be a lot different for a lot of people now.’

Adele Jackson, a 24-year-old office worker from Portsmouth, expressed her fears for independent pubs and said she ‘made sure she enjoyed her last sip’ from a pint of Hop House after hearing the news while enjoying a post-work drink.

She said: ‘I’m worried for local businesses, people have plans and people want to go on and do things as normal as they can. We’ll have to see what I’m going to do, who knows? I’ll have to drink from home if there’s any left on the supermarket shelves, all the shelves are empty.

‘I came out for a beer but after hearing the news I made sure I enjoyed the last sip of my Hop House – it’s going to be the last one I have for a while.’

She added: ‘I’m a social person, I like to get out and see different people and do different things. I struggle to be cooped up for weeks and weeks on end.

‘It’s those routine and habits.. You get to get to the weekend and you want to do the things that keep you going.’

She said: ‘It’s a great measure and that’s how it should be, it’s not their fault they will be out of work.

‘It’s a lifeline for these people in such uncertain times. 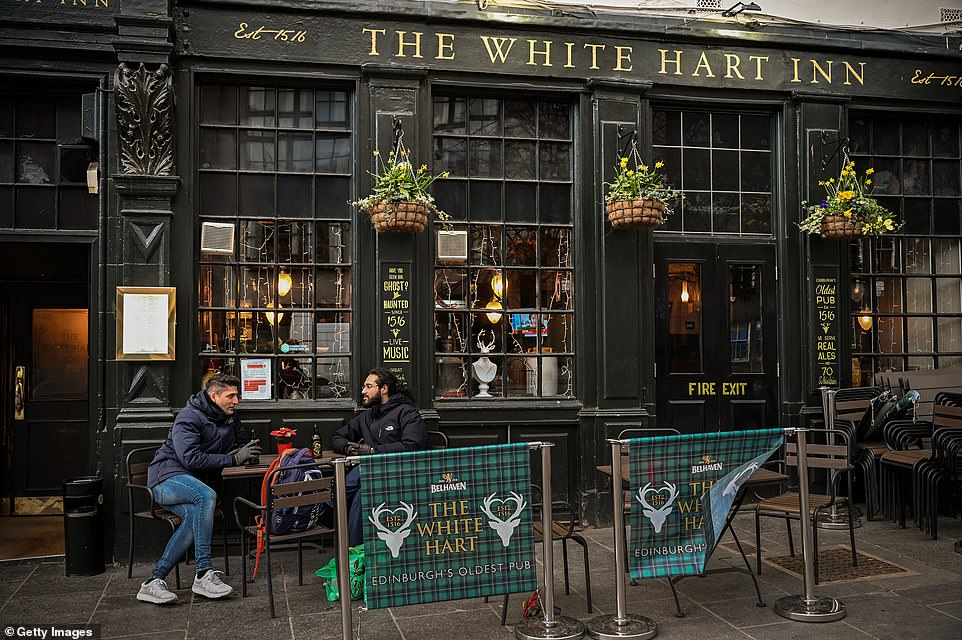 Men drink outside The White Hart Inn on March 20, 2020 in Edinburgh, United Kingdom. Prime Minister Boris Johnson announced that the country’s bars, pubs, restaurants and cafes must close tonight to curb the spread of COVID-19, which has killed more than 100 people in the UK 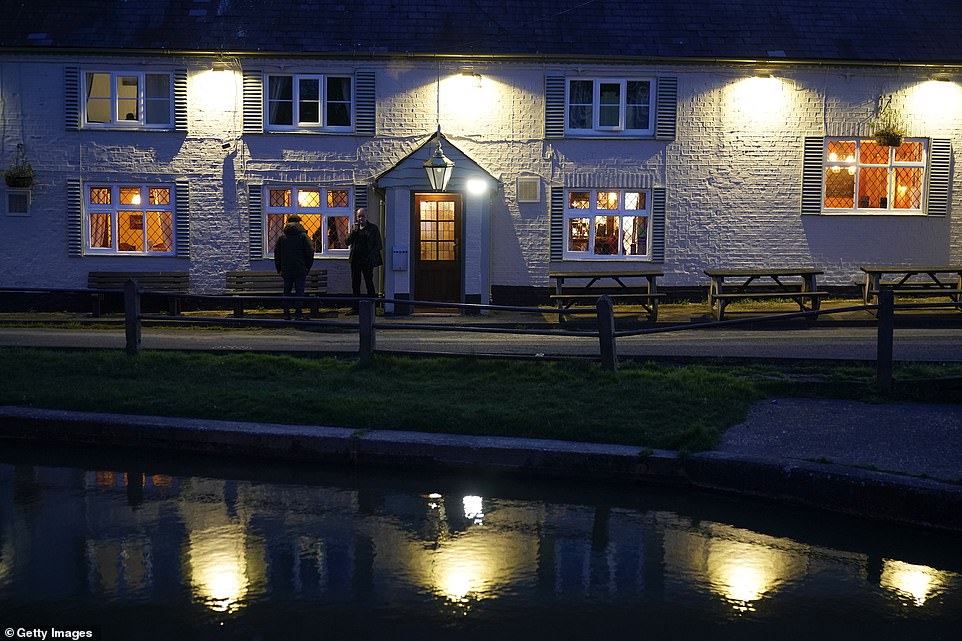 ‘There will still be some slipping through the net unfortunately but any measure they can take to try to prevent that is worth doing.’

Cook and cleaner Ash Moth, 54, from Portsmouth, said: ‘I don’t drink indoors so that’s the last drink I’ll probably have until Christmas.’

Mr Moth, was in disbelief after hearing Boris Johnson’s ban and predicted: ‘When this finishes the world will go into recession.’

He said if not for the ban, he would have continued drinking at his local ‘every Friday, Saturday and Sunday’.