The last survivor of the transatlantic slave trade has been revealed as a West African woman who died in 1940 aged 83.

Historians previously believed the last living slave brought to the United States from Africa was a woman called Redoshi Smith, who died in 1937.

But now Matilda McCrear has been revealed as the most recent surviving captive.

Much of her fascinating life story was unknown to her family, who were unaware she was brought to America on board the Clotilda – the last slave ship bound from Africa to the US.

After emancipation McCrear had 14 children with a white German-born man who historians believe was most likely Jewish.

And in the 1930s she launched a legal bid to try and get reparations for former slaves. 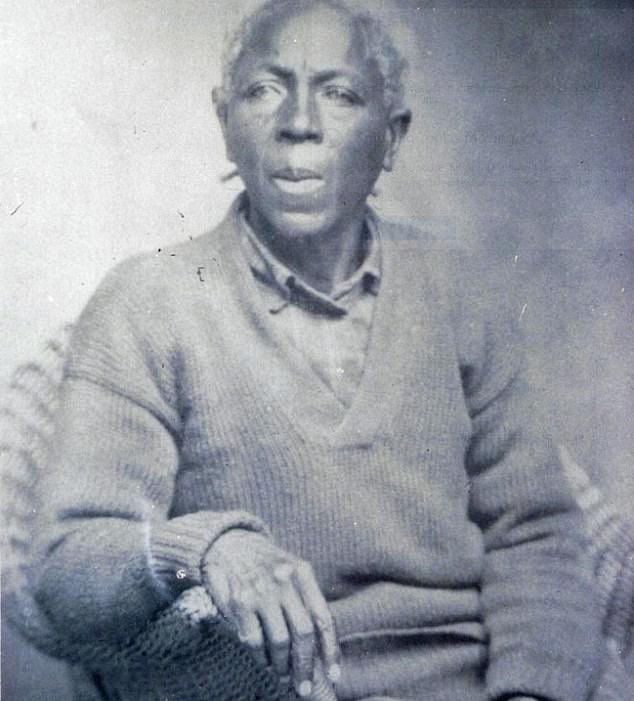 Matilda McCrear died in Selma, Alabama, in 1940. She is thought to be the last survivor of the the slaves brought to the US on board the Clotilda ship in 1860 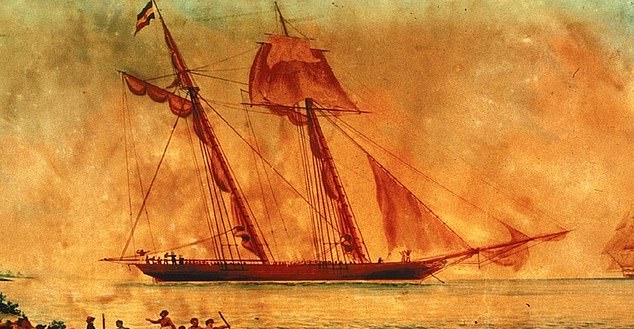 The Clotilda slave ship brought more than 100 slaves to Mobile, Alabama in 1860 as was the last known transatlantic vessel to do so

Dr Hannah Durkin, at the University of Newcastle, who first identified Smith in 2019, has now discovered McCrear while researching the Clotilda.

Drawing on a newspaper interview with McCrear in the 1930s and by piecing together genealogical data, her study charts her experiences from slavery to the Great Depression, right up to the start of World War II.

Dr Durkin, whose research is published in the Slavery and Abolition journal, said McCrear may not have discussed her past as a slave, even with her family, due to the stigma attached.

She told the BBC: ‘But Matilda’s story is particularly remarkable because she resisted what was expected of a black woman in the US South in the years after emancipation.

‘There was a lot of stigma attached to having been a slave. The shame was placed on the people who were enslaved, rather than the slavers.’ 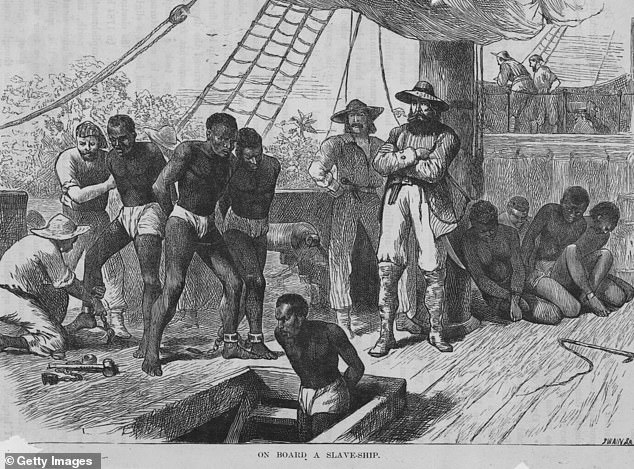 The schooner Clotilda was the last known US slave ship to bring captives from Africa to America.

It landed at Mobile Bay, Alabama, with around 110 slaves in July 1860, although some historians believe it arrived in autumn 1859.

Under the command of Captain William Foster, the ship was commissioned by wealthy Mobile shipyard owner and steamboat captain, Timothy Meaher.

Meaher launched the expedition to smuggle slaves into America, despite the importation being illegal, as part of a wager with another wealthy businessman from New Orleans.

Captain Foster carried $9,000 in gold for purchase of slaves and was said to pay $100 for each.

He met with the King of Dahomey – modern day Benin – after learning West African tribes were fighting and prisoners captured in warfare were available for purchase.

Those taken on the Clotilda were primarily Tarkbar people taken in a raid in present-day Ghana.

Fearful of criminal charges on his return to the US, the ship was disguised as it sailed to its destination.

Captain Foster then brought the schooner into the Port of Mobile at night and had it towed up the Spanish River to the Alabama River at Twelve Mile Island.

He transferred the slaves to a river steamboat, then burned the Clotilda before sinking it.

The West Africans taken by Meaher were held on his plantation and some were sold to other slave traders.

McCrear was captured by slave traders in West Africa at the age of two and was taken to Alabama in 1860 on board the last known transatlantic slave ship.

She was one of around 110 slaves taken from Dahomey, which is now modern day Benin, and transported to Mobile Bay, Alabama, in secret as the importation of slaves had been banned by Congress in 1807.

McCrear’s mother, Grace, and sister Sallie, were also taken, while her father and two brothers were left behind in Africa, Dr Durkin’s research found.

All three tried to escape the plantation soon after they arrived but were recaptured and after being sold to different plantation owners, McCrear never saw her mother again.

Although the importation of slaves has been made illegal, slavery in the US was not abolished until 1865.

When emancipation came, McCrear and her family, like many other former slaves, became trapped in poverty and worked the land as share-croppers.

But McCrear refused to conform to what was expected. She never married and had a common-law marriage for decades with her German-born man partner.

Even though she was taken as a toddler, McCrear wore traditional Yoruba dress and had facial markings that are still practiced in the African region today.

She is believed to have initially lived in a community of surviving African slaves in Mobile, known as Africatown, that worked to preserve their traditional way of life such as their West African music and language.

While in her 70s, McCrear fought to get compensation for her enslavement with a legal action at the county courthouse.

But unsurprisingly her claim, brought during a time of racial segregation in the Deep South, was dismissed. 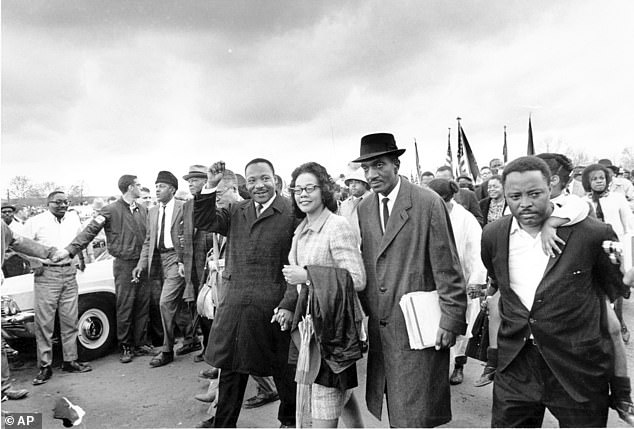 Dr Martin Luther King Jr, and his wife, Coretta Scott King, leading off the final lap to the state capitol at Montgomery, Alabama, after marching from Selma in March 1965 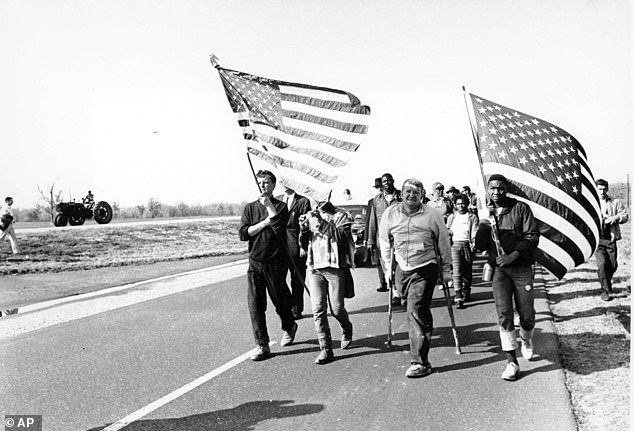 Her bold move did bring attention from local newspapers and an interview with McCrear at the time shed light on her life story and formed the basis of Durkin’s research.

McCrear died in Selma, Alabama, in January 1940. Just 20 years later the town became a flashpoint for the Civil Rights movement when Martin Luther King and his followers carried out their famous protest march to Montgomery.

Johnny Crear, her 83-year-old grandson, says he had no idea about his grandmother’s historic past.

He was born in the house where she died and would have been a baby when his grandmother died.

Crear witnessed the violence against civil rights marchers in Selma, but did not known his grandmother had been a slave.

He told the BBC: ‘I had a lot of mixed emotions. I thought if she hadn’t undergone what had happened, I wouldn’t be here. But that was followed by anger.

‘This [the research] fills in a lot of the holes that we have about her.’

In the 1960s, he had witnessed violence against civil rights marchers in Selma, where protesters had been addressed by Dr Martin Luther King.

Africatown is a community founded by some 32 former slaves who were on board the Clotilda on the north side of Mobile, Alabama.

Cudjo Kazoola Lewis was said to be a chief and the oldest slave on the ship that took West Africans to America, and after the Civil War he was among the founders of Africatown.

They were joined by other continental Africans and formed a community that continued to practice many of their West African traditions and Yoruba language for decades. 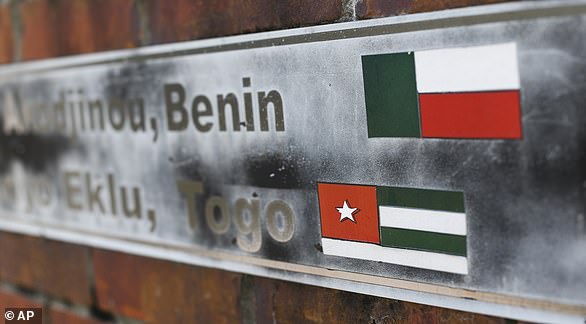 The flags of the nations of Benin and Togo, the west African homes of the survivors of the Clotilda, remain on display on a monument at what was the Africatown Welcome Center in Mobile, Alabama

The group retained their West African customs and language into the 1950s, while their children and some elders also learned English.

Some 100 descendants of the Clotilda slaves still live in Africatown, and others are around parts of the US.

Lewis lived until 1935 and was long thought to be the last survivor of the slaves from the Clotilda.

But West African woman, Redoshi Smith, who died in 1937 was discovered by Dr Hannah Durkin, at the University of Newcastle in 2019.

Dr Durkin the discovered Matilda McCrear this year who died in 1940, aged 83.