Here come the HOVE-IDIOTS! Lockdown flouters lap up the south coast sun… while yet more covidiots go for stroll in Kensington Palace Gardens

Britons continue to flout lockdown rules as they break social-distancing measures by running, cycling, and strolling within 6ft of each other through Kensington Palace Gardens and along the seafront.

Men, women, and children of all ages rushed outside today to enjoy beautiful spring weather on the fourth weekend of total lockdown, strolling through London’s parks and down Hove’s seafront.

Runners and cyclists enjoyed their once daily form of exercise, officially approved by the Government and by new police guidance issued to help clarify the rules around the lockdown for officers.

Others took advantage of the ambiguity of the daily quota of exercise by sunbathing on the grass, often within less than 6ft of each other – the official distance people are supposed to keep.

Many people wore face masks to ensure they could not unwittingly transmit the virus, which scientists around the world increasingly recognise can be carried by patients who are asymptomatic.

One cyclist was even pictured travelling straight towards a small group of people. It appears they were cycling at such speed that it would be unlikely for them to get out of the way from a safe distance.

Meanwhile, scores of people flocked to Hove Seafront to enjoy the hot weather, as couples held hands while walking, cyclists pushed their bikes, and groups sat on the pebbles beach.

These astonishing scenes come a week after the National Police Chiefs’ Council and the College of Policing issued new guidance meant to clarify the rules around the lockdown for officers.

Police forces have been accused of zealotry when enforcing the lockdown, breaking up groups of two, bellowing at flouters through megaphones, and moving people sat on park benches on.

Meanwhile, there are concerns that a long-term lockdown would be impracticable. This has caused business and political leaders to demand that the Government set an ‘exit strategy’ in motion.

On another frantic day with tensions rising in the coronavirus battle: 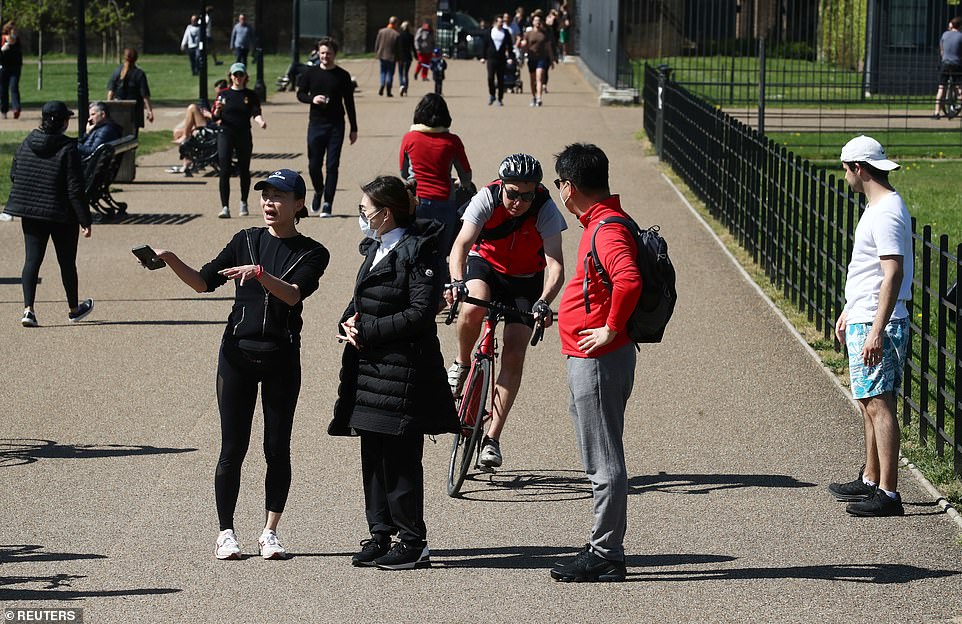 A man is seen cycling in Kensington Palace Park, as the spread of the coronavirus disease continues (April 19, 2020) 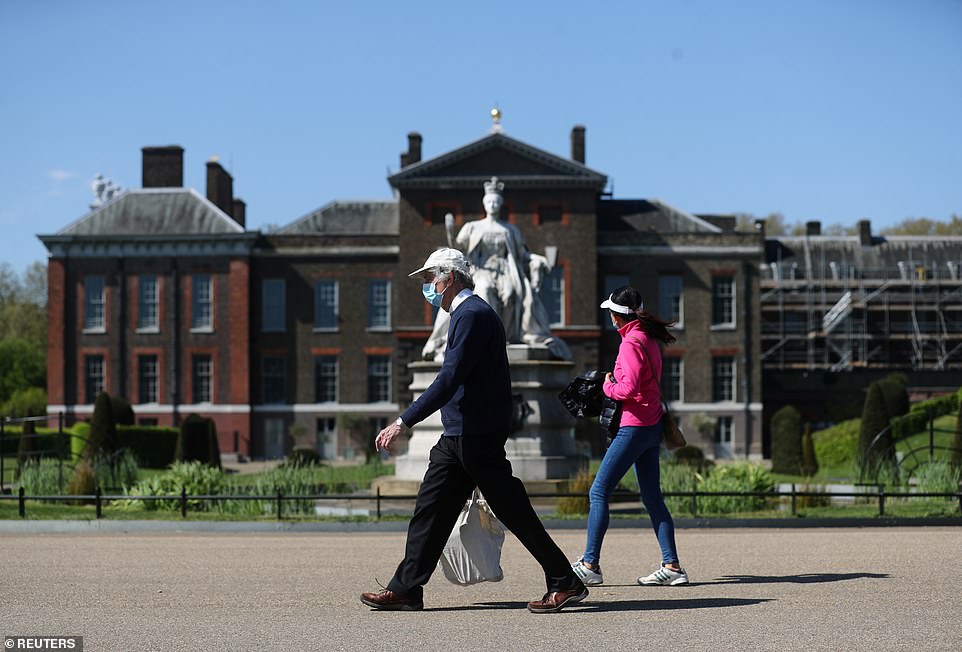 People wearing masks take a walk in Kensington Palace Park, as the spread of the coronavirus continues (April 19, 2020) 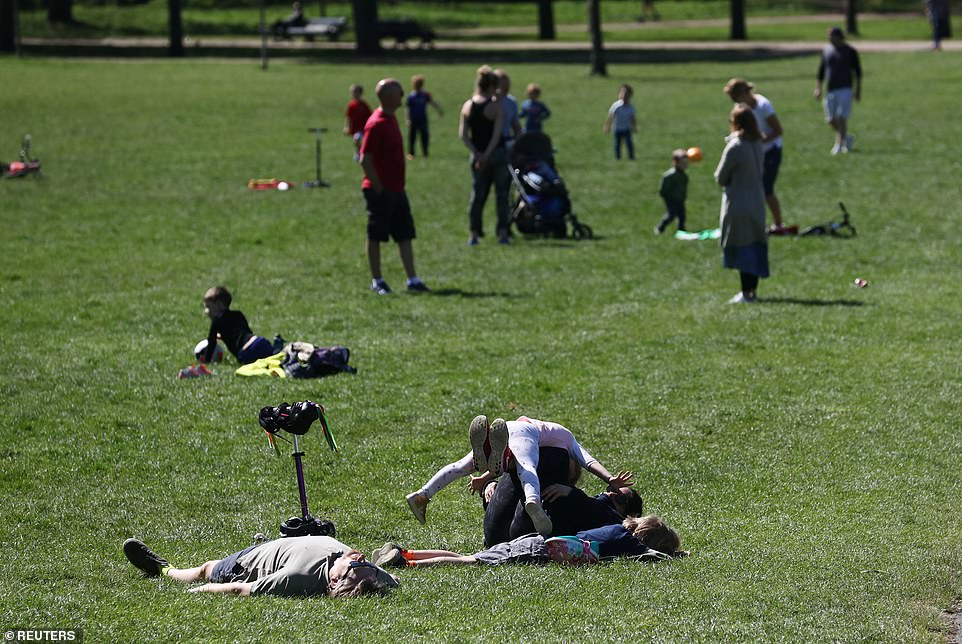 General view of people in Kensington Palace Park on April 19, 2020, where they are sunbathing in violation of lockdown rules

No ‘certainty’ that a coronavirus vaccine can be made, top scientist warns Government

It is not ‘completely certain’ that a coronavirus vaccine can be produced, one of the scientists leading efforts to make the breakthrough warned today.

The note of caution from Professor Sarah Gilbert, Professor of Vaccinology at Oxford University, came as Cabinet minister Michael Gove said people should not assume such treatments were a ‘dead cert’.

Prof Gilbert told the BBC’s Andrew Marr Show: ‘That’s why we have to do trials to find out. The prospects are very good, but it is clearly not completely certain.

‘We are waiting for the final safety tests to be done on the vaccine and the final approvals to be given.’

In the meantime, permission has been given to recruit volunteers, take blood tests, explain the process and check their health status, she said.

‘By the time we have all the approvals for the vaccine ready, we should have a good pool of volunteers to draw from and we should be able to get going quite quickly.’

Schools could return within three weeks under a ‘traffic light’ plan being pushed by senior ministers amid Cabinet splits over whether the Government should risks Covid-19 deaths to save the economy.

The fledgling ‘exit strategy’ would see the country get back up in running in stages after May 11, with primary and GCSE pupils potentially going back part-time, according to The Sunday Times.

Meanwhile, clothes shops and garden centres could be among the ‘non-essential’ stores given a ‘green light’ to reopen with precautions to protect customers. Rail services would be brought up to normal levels, with commuters urged to wear face masks, and the NHS would resume carrying out non-urgent procedures.

A second ‘amber’ stage later in the summer would see more of the economy revived, with all employees told to go back to work and some social gatherings allowed.

Pubs and restaurants might not reopen until later in the year, along with sporting events. And over-70s face a ‘red light’ for many more months, potentially having to wait for a vaccine before returning to normality.

The proposals are gaining traction amid a mounting backlash at the lack of a clear plan. Senior ministers are divided between those who want to ‘run hot’, using apparent spare capacity in the NHS to relax social distancing soon, and those who fear acting too early will allow the disease to run rampant.

After concerns about drift at the heart of power, Boris Johnson is gearing up to take back the reins of Government, making calls to ministers from Chequers where he is recuperating from his own health scare.

Super-rich tourists have been using private jets to fly to Britain from coronavirus -ravaged countries.

Among them were 25 aircraft from Covid-stricken Spain, 15 from the US – the world’s worst-affected nation – 27 came from France and 32 from Germany.

It comes after a private jet full of rich holidaymakers from London was sent packing from France when they tried to get to their Cannes villa by helicopter.

More than 15,000 people are entering the UK daily and are being allowed to leave airports without testing for the bug which has killed over 160,000 people globally.

It is understood wealthy visitors are not being transparent about why they are flying so they can bypass the Government’s ‘essential travel’ only rule.

Michael Gove tried to dampen frenzied speculation over loosening of restrictions this morning, saying while it was ‘entirely understandable’ people want to know the way out it was too early to make such decisions.

Asked if the ‘traffic light’ system was the Government’s ‘exit strategy’, the Cabinet Office minister said: ‘It is the case that we are looking at all the evidence. But we have set some tests that must be passed before we can even think about easing the lockdown.’

Although he stressed no decisions had been taken, Mr Gove did hint on Sky News at the shape of an easing, suggesting pubs and other parts of the hospitality industry will be ‘among the last’ to come back.

Warring neighbours are using the crisis as a pretext to make ‘deliberately false reports’ to police about locals suspected of flouting the lockdown, it has emerged.

Police chiefs had asked the public to snitch on neighbours accused of violating lockdown rules.

They are now asking Britons to stop exploiting the pandemic to settle feuds by making unwarranted calls.

A senior police source told The Observer newspaper: ‘People have had pops at each other and are using this as an opportunity to try to cause more grief and get officers around to their address.’

The NPCC wants the British public to ‘exercise common sense and only report well-meaning concerns’.

‘Deliberate false reporting, obstruction or misinformation at a time of crisis helps nobody,’ the CoP added. ‘In those cases police will use their discretion in determining whether enforcement action is appropriate.’ 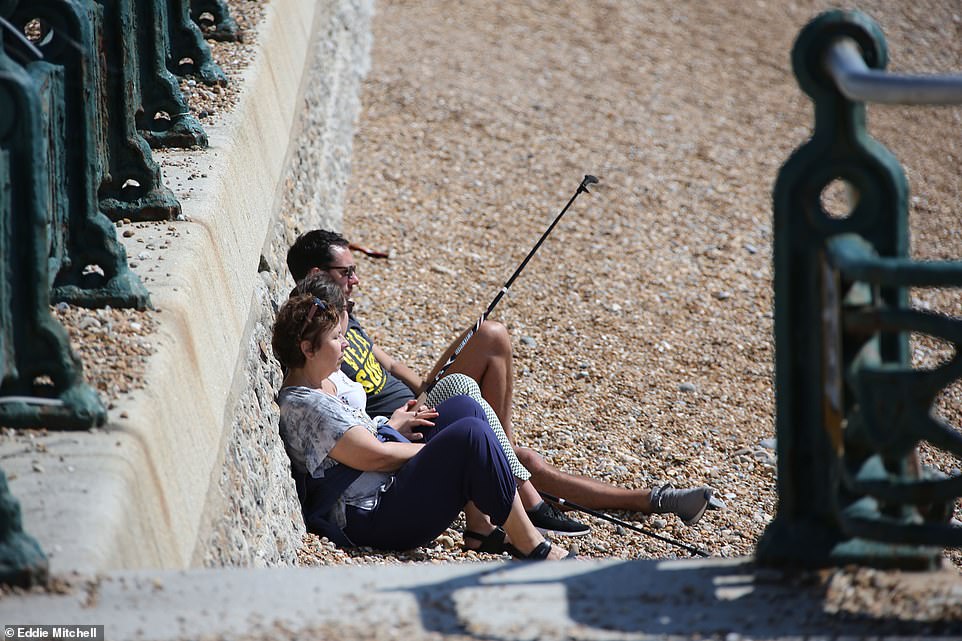 Three people are spotted sitting on the pebble beach at Hove amid good weather during the coronavirus lockdown, April 19 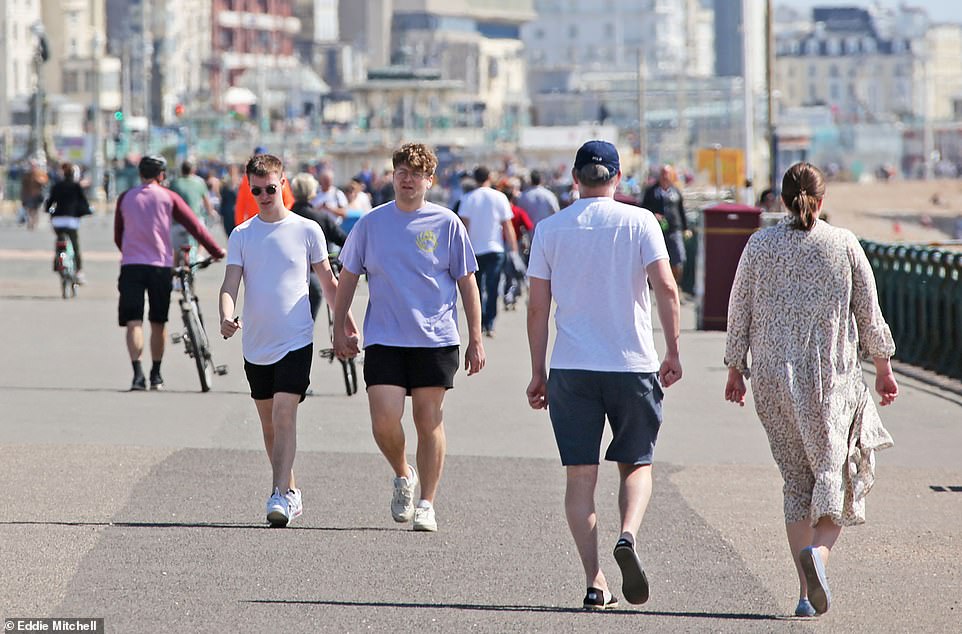 Couples and cyclists were spotted walking along Hove seafront during the coronavirus lockdown, April 19 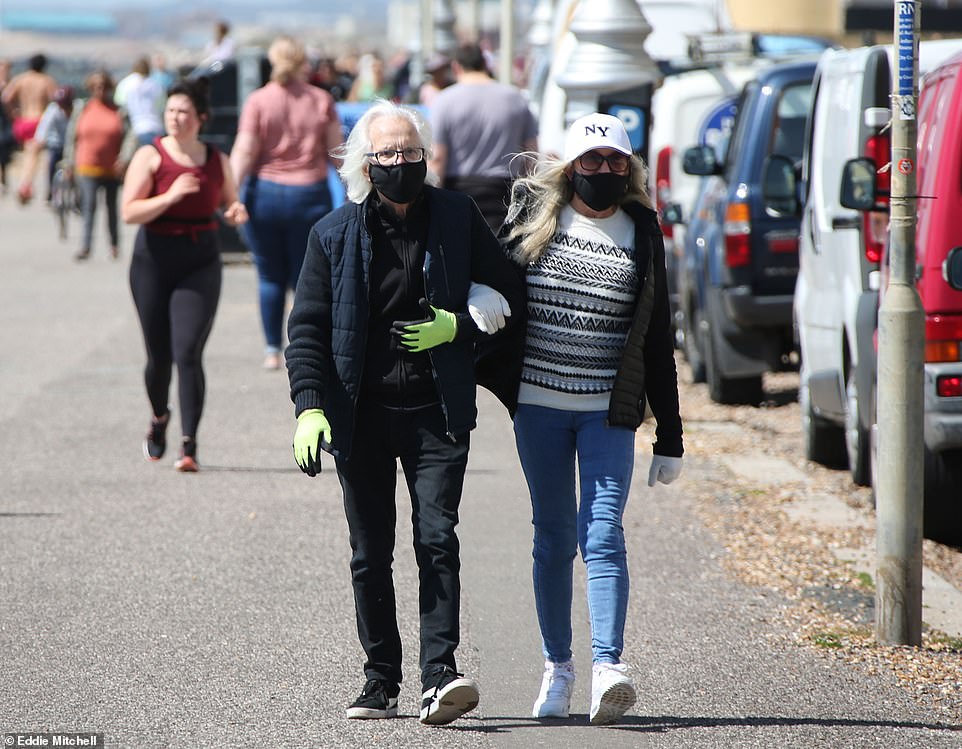 Scores of Britons continue to flout lockdown rules as ‘Hovidiots’ rush down to Hove seafront to enjoy the sunshine, April 19 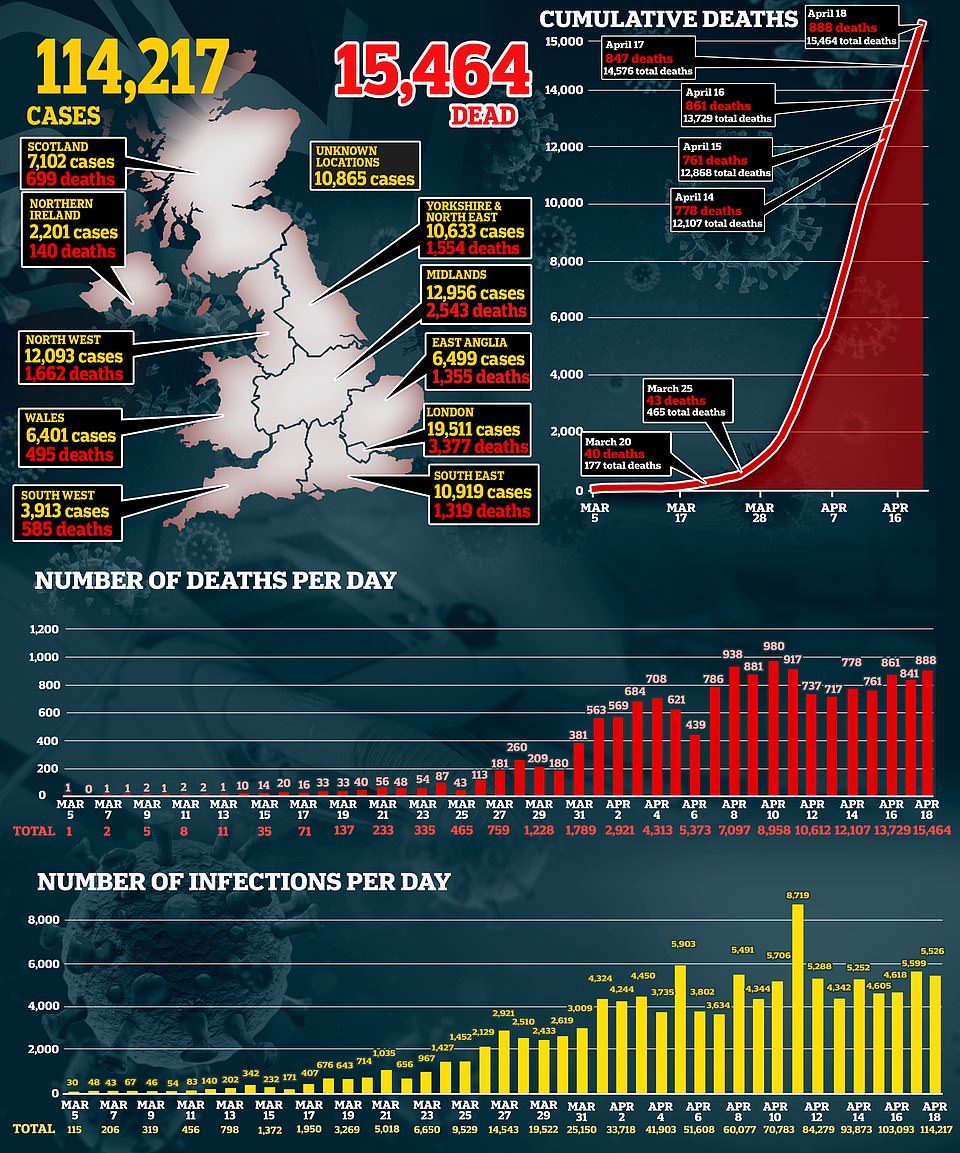