CHAOS at London's Euston Station has pushed on this morning with trains STILL delayed – after passengers were forced to sleep in the station overnight.

Euston – one of the busiest stations in the UK – was rammed as passengers couldn't board trains yesterday night after a fallen tree caused mega delays. 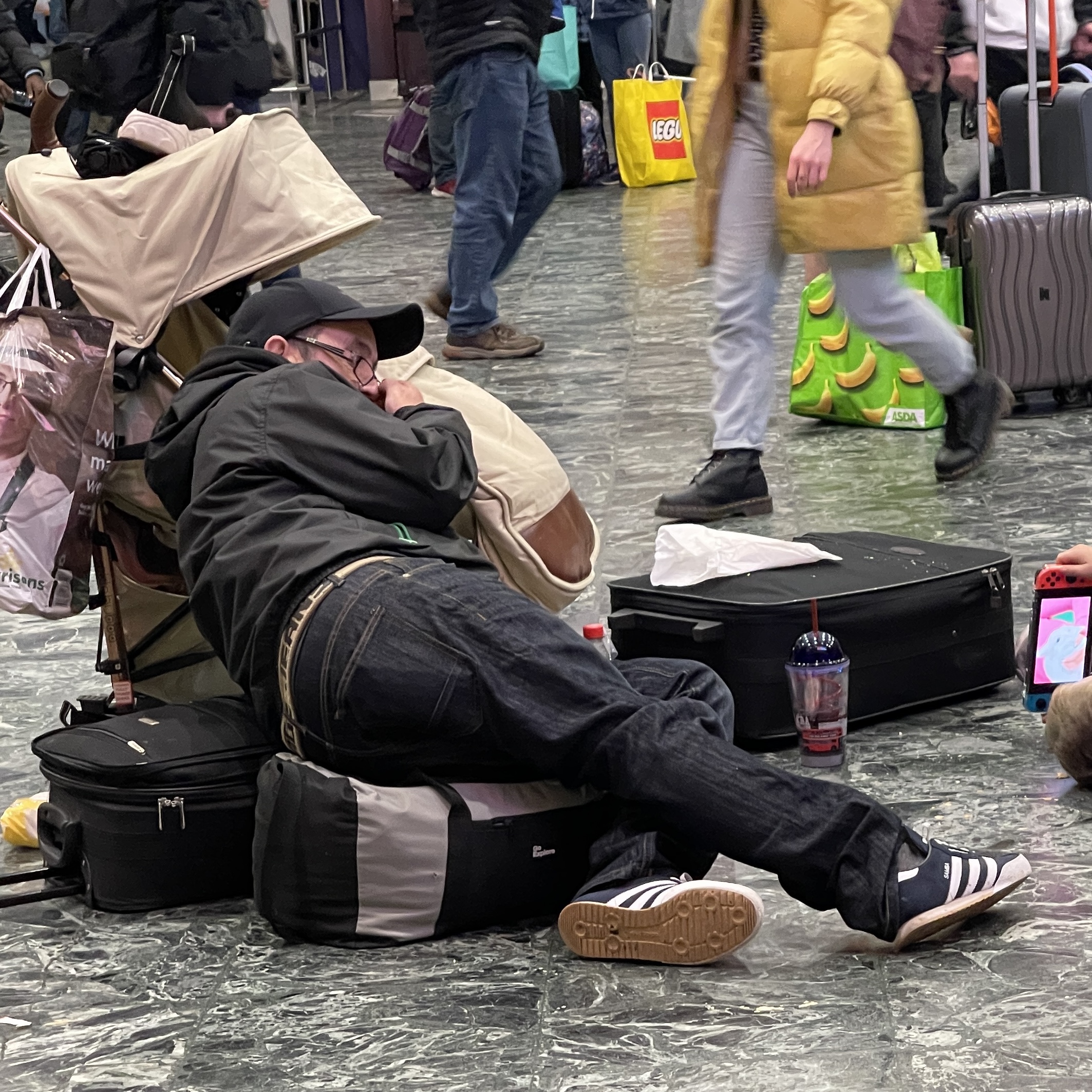 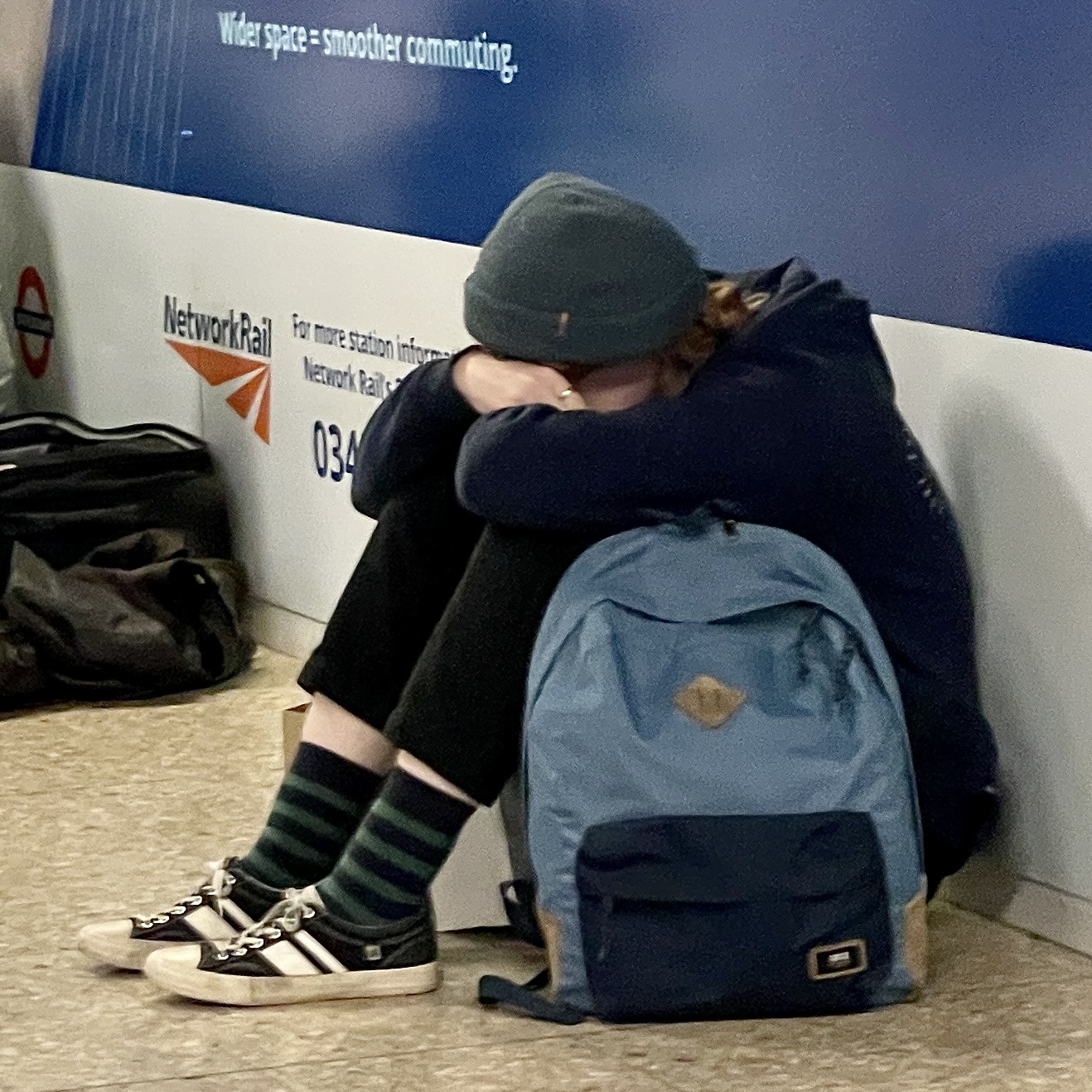 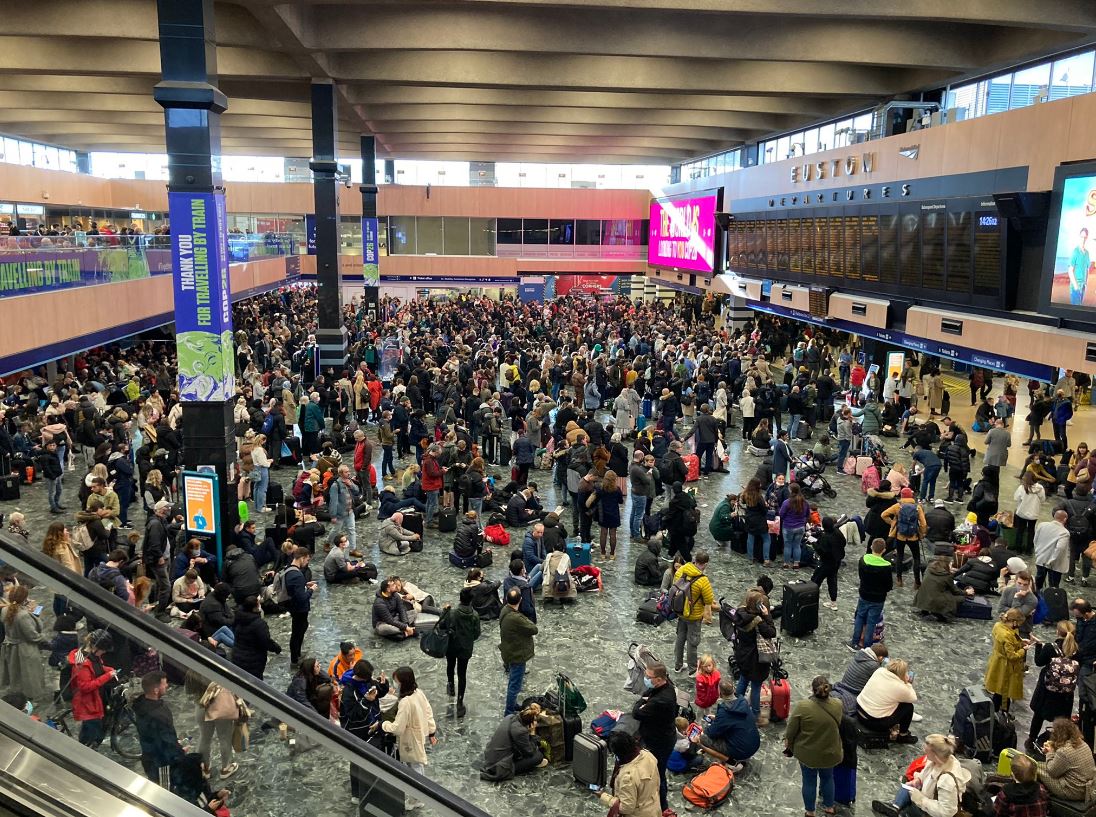 And delays pushed on into the morning, with Network Rail urging passengers to check if their line is suffering from "residual disruption".

A spokesman said: "Trains are moving again in and out of Euston after our overnight engineers repaired overhead electric wires damaged by a fallen tree near Rugby yesterday.

"Still some residual delays as we seek to resume a normal timetable."

Chaos struck last night, with desperate passengers forced to camp out on the floor after they were "locked inside".

The fallen tree caused damage to overhead wires between Northampton and Rugby.

Photos from inside the building showed swarms of people looking up at departure boards displaying delay after delay.

The mayhem meant huge delays for people heading to the first day of COP26 in Glasgow, and some heading to watch Aston Villa take on West Ham at Villa Park missed the game.

Scores of travellers also fretted that they may not make it to work or school tomorrow.

One person wrote yesterday: "I have my three-year-old with me, nowhere to stay in London tonight. I'm due to travel on the 16.28 from Euston to Warrington. What shall I do?"

Another person, trying to get to Glasgow, was diverted to Milton Keynes for three hours – before being told the train was heading back to London Euston.

And the same situation happened for one poor traveller: "For the second time today my train to Manchester from London Euston has arrived… back at Euston.

"Ten hours since leaving Euston for the first time.

A laboratory analyst tweeted alongside a meme of a distressed-looking man: "Slowing finding out about the chaos on London trains when your due to travel into London Euston from Liverpool (and also having work tomorrow)."

Another issued a plea for help, asking: "Please, how can children go back to school from London Euston to Manchester. Help help help."

Elsewhere a Villa fan said: "Trains from Euston cancelled so won’t make the game today after all.

"Could be worse, but back at VP for the next one. (Wind and trees pending!)."

And another passenger, heading to north west for a disability conference, said: "So disappointed that I can’t get to Liverpool for our UNISONdm conference.

"Always one of my favourite conferences. Stuck on train for three hours then sent back to London.

"Chaos at Euston as all trains north cancelled."

And environmental journalist Cecila Keating shared a photo of a packed-looking Euston as she shared her frustration with the hold-up.

"Hundreds of delegates to a climate conference stuck in Euston because UK's infrastructure just isn't resilient to climate change," she tweeted.

Another reporter hoping to make it to day one of the climate change conference said it was "not clear how or whether anyone is getting to Glasgow" in time.

The tree fell amid warnings that "tornadoes are not out of the question" as strong winds and rain batter the UK.

Gusts of over 80mph have been recorded, with yellow warnings for wind and rain in place over large parts of the west.

Meteorologist Tom Morgan said the Met Office could not confirm any tornadoes or funnel clouds but would not rule them out.

A Euston spokesperson said: "All trains currently suspended due to a fallen tree causing damage to overhead wires.

"Passengers are currently being advised not to travel.

"Due to overcrowding, Euston Station is currently exit only.

"The tree has damaged the overhead line equipment which powers trains – we’re working to resolve the issue as soon as possible – we’re really sorry for the disruption this is causing." 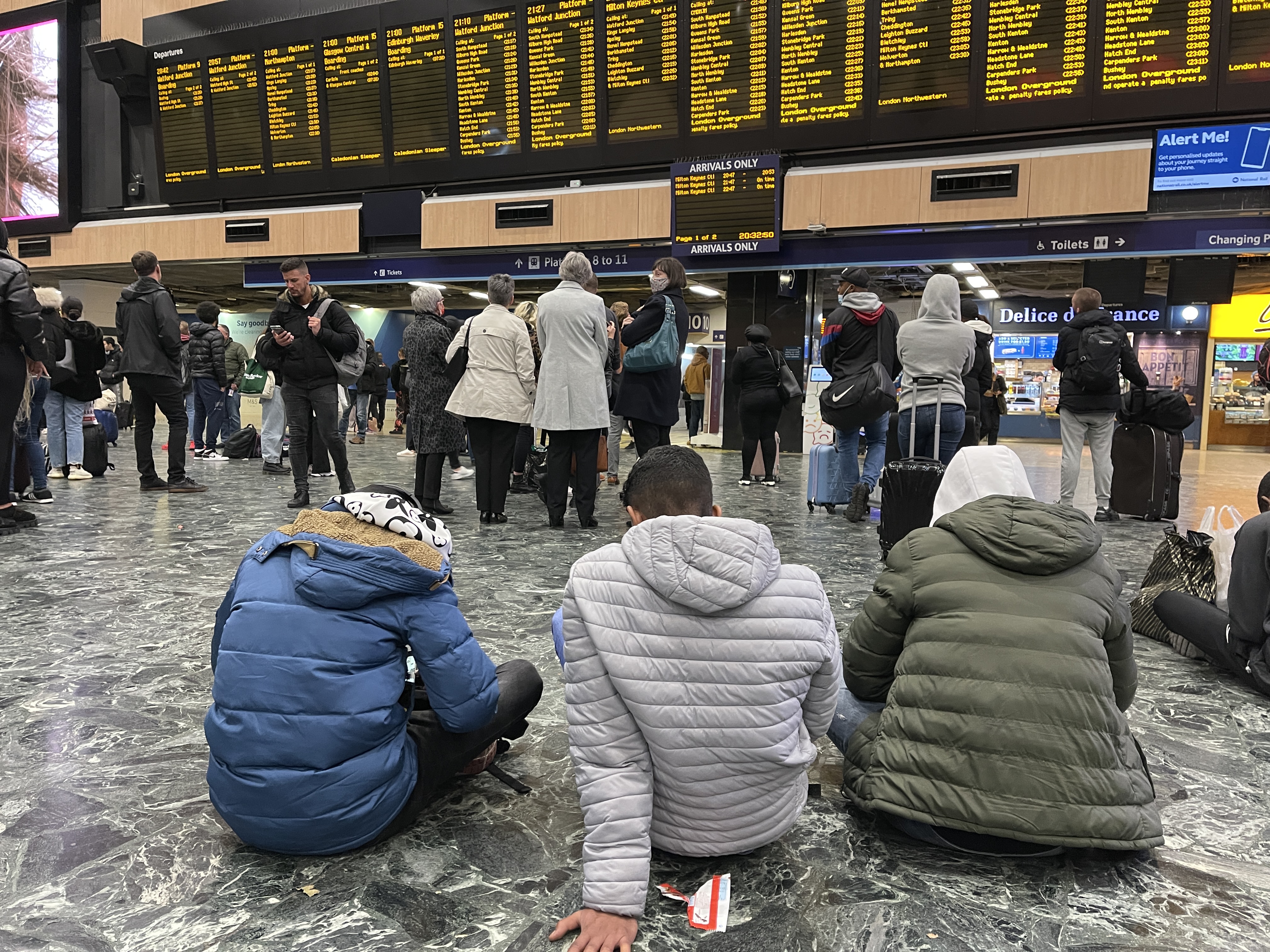 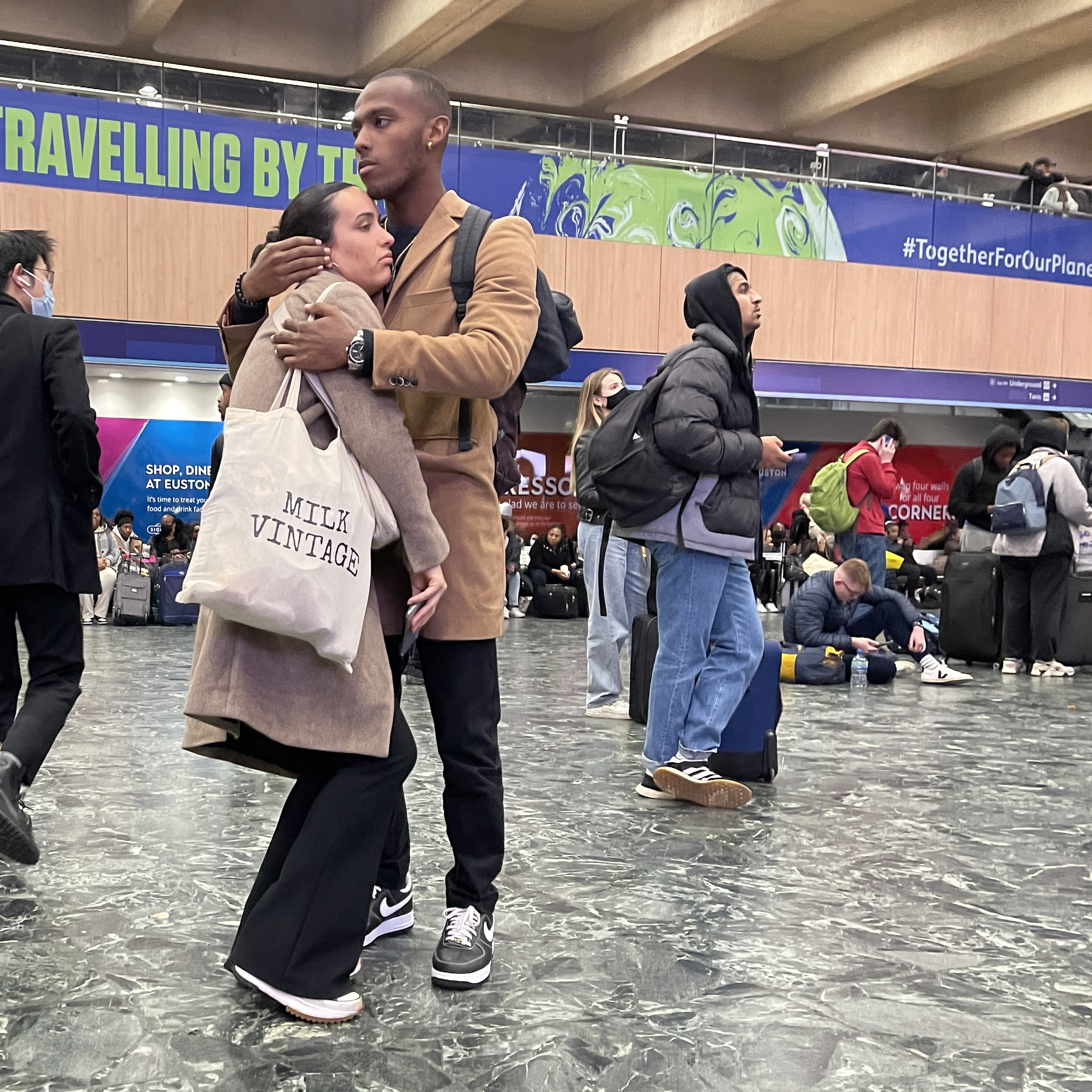 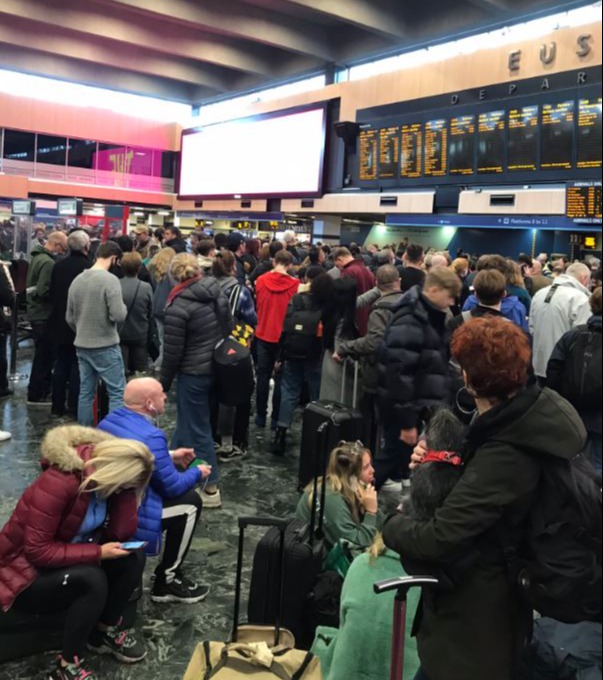 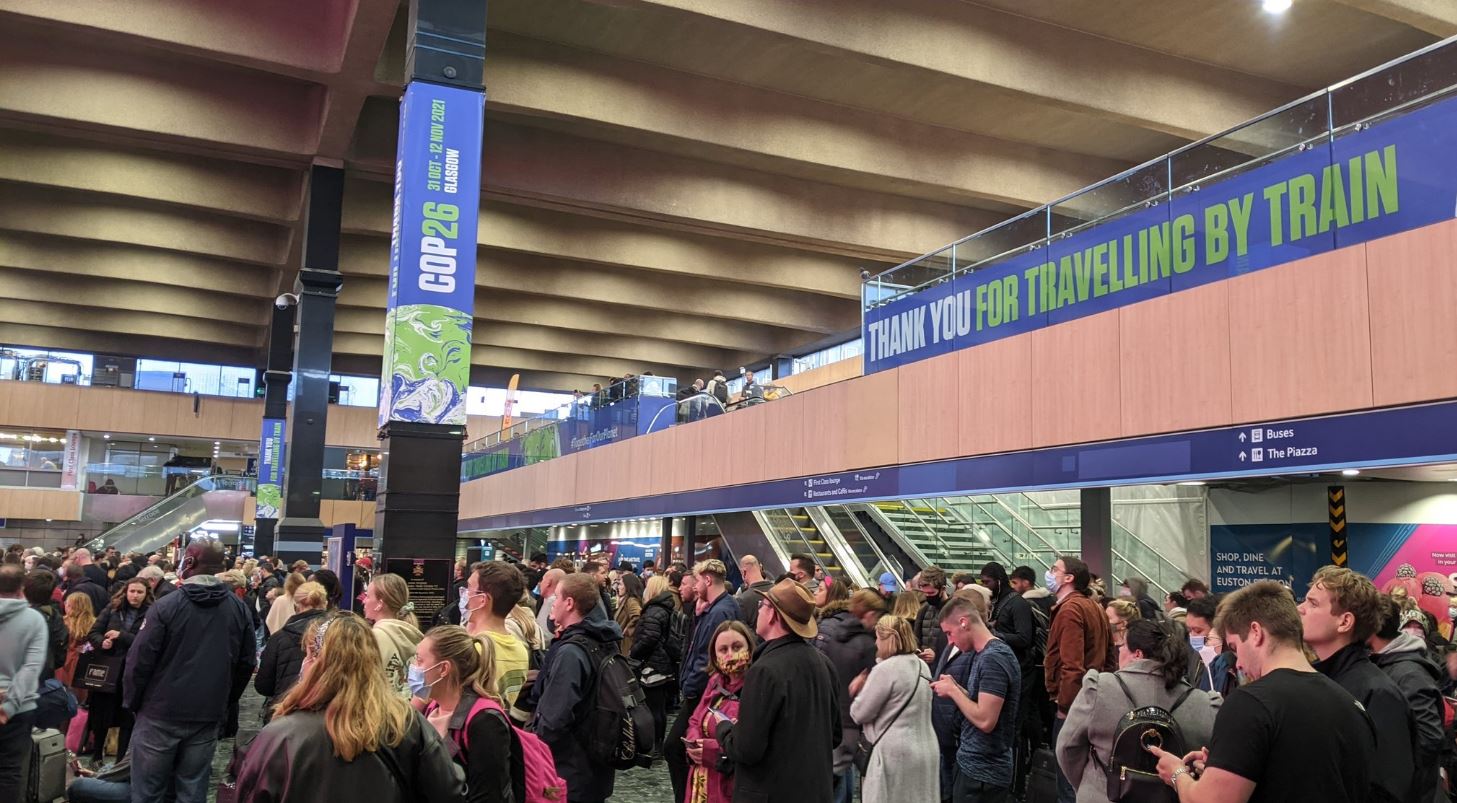 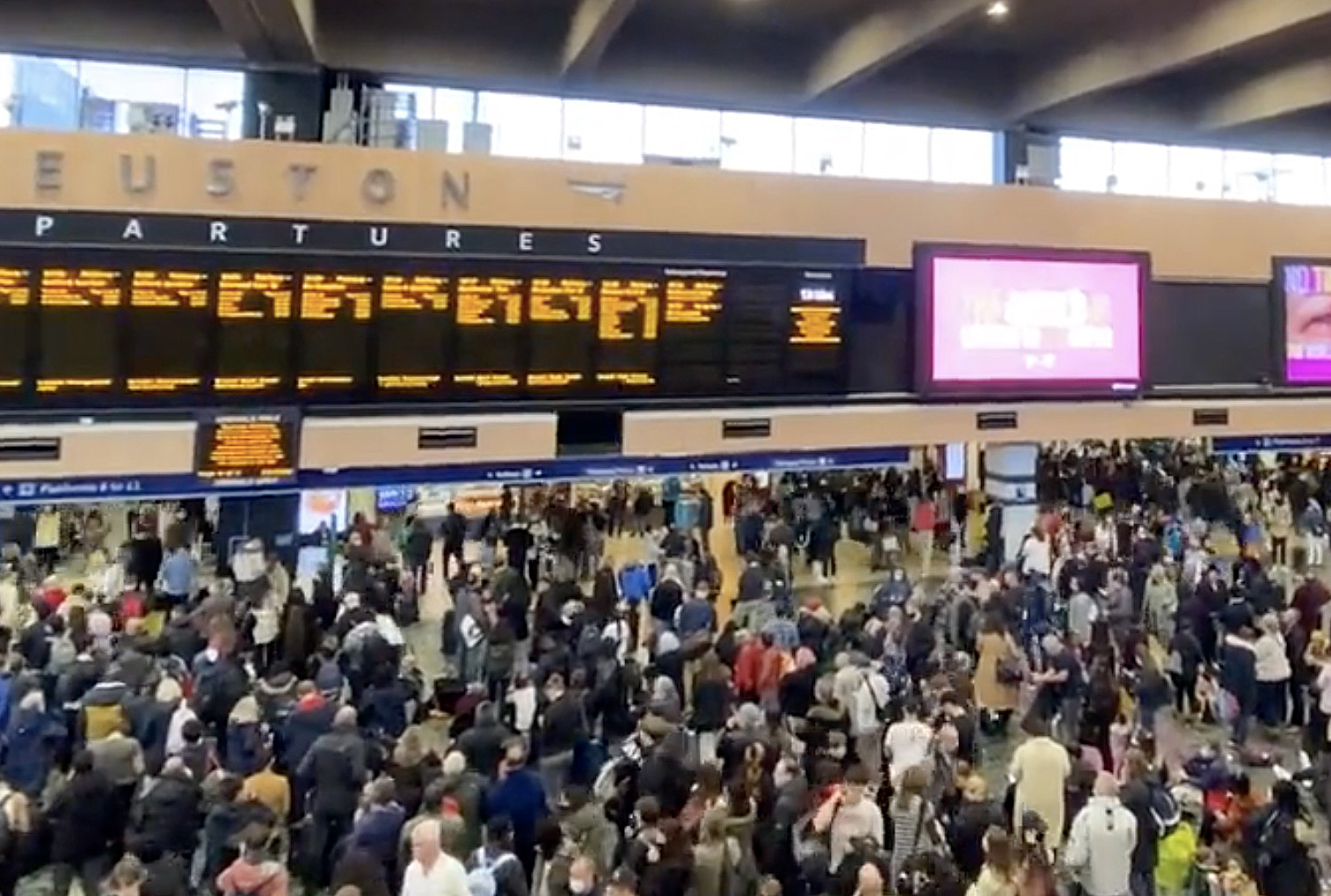