Two people have died inside neighbouring apartments in Manchester amid reports of a suspected gas leak.

A woman and a man were found dead by Greater Manchester Police in Princess Road, Rusholme, on Saturday afternoon and evening respectively.

Officers had discovered the woman at around 4.20pm, before receiving a call around three hours later over concerns for the man next door.

Police entered his home and found he had also passed away.

Fire crews remained in attendance late on Saturday evening following the reported gas leak, while nearby shops were evacuated.

An investigation is under way but police say there is no risk to the wider community at this stage while they have ruled out any third party ‘physical involvement’.

Superintendent Mark Kenny said: ‘The deaths may not be connected but at this stage the precise cause of death cannot be established.

‘However, we can rule out direct third-party physical involvement.

‘I would like to reassure the community that there is no wider risk at this time.

‘Detectives are now investigating the circumstances to ascertain the cause of death and will remain at the scene while the investigation is ongoing.’ 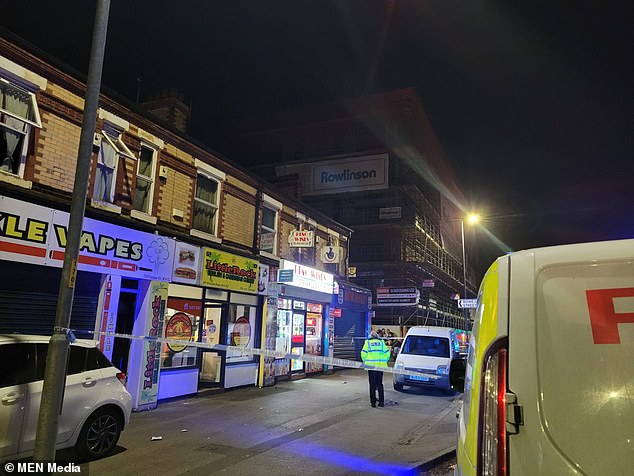 A woman and a man were found dead by Greater Manchester Police in Princess Road, Rusholme, on Saturday afternoon and evening respectively. (Pictured: Police cordon off scene) 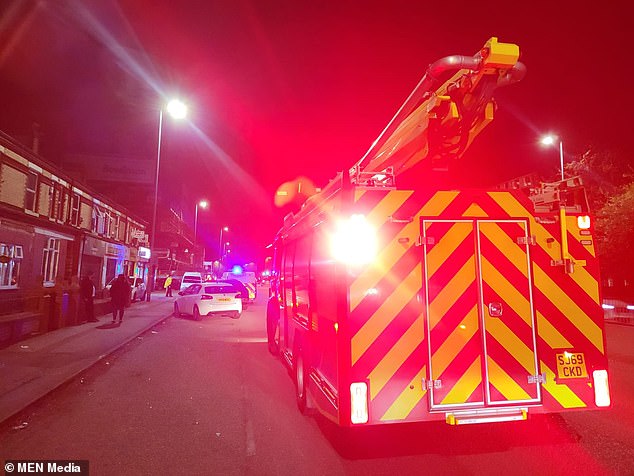 Earlier, a Greater Manchester Police spokesman said they had been called to the scene at around 4.20pm by the North West Ambulance Service (NWAS).

The force added: ‘Officers attended and while at the address were further contacted at 7.10pm in relation to a concern for welfare at a neighbouring flat.

‘NWAS attended the address first and, sadly, found a man deceased inside.

‘An investigation is under way into both deaths and there is a scene in place.

‘GMFRS [Greater Manchester Fire and Rescue Service] attended to test for a gas leak and nearby shops were evacuated as a precaution to ensure public safety.

‘At this stage there is no risk to the wider community and the investigation is at a very early stage.’

Photos from the scene show police and fire in attendance on Princess Road, close to the junction with Bowes Street.

A fire service spokesperson said: ‘At 7:52pm on Saturday 23 April 2022, fire engines from Withington and Salford fire stations attended a suspected gas leak in a flat on Princess Road, Manchester.