Man caught driving around Las Vegas with a severed head was ‘just an unlucky car thief’, his lawyer claims – but police insist he KNEW his victim 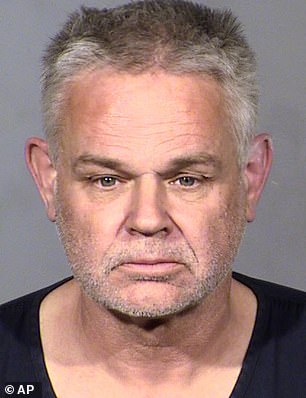 Eric Holland, 57, was arrested after evading police in a stolen car on December 23. When the car was inventoried, police discovered the disembodied corpse of Richard P. Miller, 65, who they say was Holland’s acquaintance

A Las Vegas man found with an acquaintance’s severed head and body in his car, may just have been ‘a hapless car thief who just picked the wrong car,’ his lawyer said Tuesday.

Eric Holland, 57, was found with three handguns and taped-up coolers with the body parts inside  when he was stopped on December 23.

The head and body parts were found to belong to 65-year-old Richard P. Miller – an acquaintance of Holland, according to Las Vegas Metropolitan Police, although they did not detail how they knew each other.

Prosecutor Giancarlo Pesci, who showed pictures of Miller’s severed head in at the Regional Justice Center in Las Vegas at a January 4 bail hearing, and said that Holland was found with receipts for a power saw, construction-grade plastic bags and heavy-duty tape found on Holland’s person after he was arrested on December 23.

Detective Tate Sanborn testified in court that the home improvement store where the receipts were printed had surveillance footage showing a person who looked like Holland buying the saw and other items.

Bullets from at least one of the three guns from his car were found in Miller’s head and body –  the Clark County Coroner said Miller died on the day Holland was arrested from multiple gunshot wounds, ruling the case a homicide.

Holland was wanted on charges of using another person’s ID, auto embezzlement of more than $3,500, intent to use a false check and theft of more than $3,500 when he was stopped by Metropolitan Police near the Rio All-Suite Hotel and Casino at around 3.42pm on December 23, according to the Las Vegas Review-Journal.

He evaded police and hopped from a 2018 Toyota Tundra into a second car, a 2007 Chevrolet Avalanche – after a drawn-out chase he was arrested, police searched the two vehicles after learning they were both stolen.

Miller’s remains were found taped into coolers in the bed of the truck.

‘[An] officer opened up one of the ice chests and discovered a human head inside that ice chest,’ Metro homicide Lt. Ray Spencer told KLAS.

‘I mean, you can imagine the horror when you open up an ice chest and you find a human head inside.’ 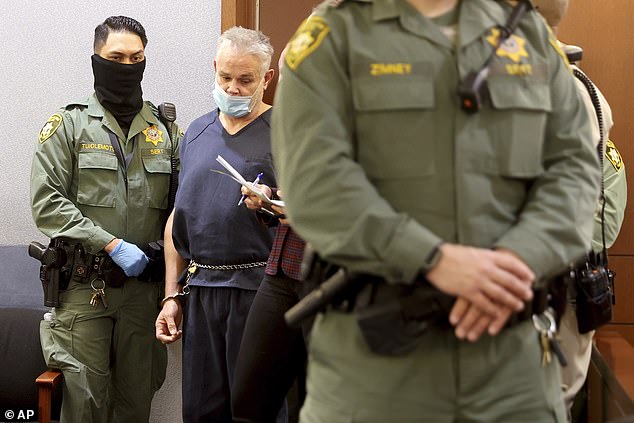 Holland is pictured in court on December 28. Receipts for power tools and three firearms were found on his person – the bullets found in victim Richard P. Miller’s body matched at least one of the guns

Holland’s public attorney, David Westbrook, argued at the bail hearing that Holland would never lead police to the second car in the chase if he had committed a murder and that the gruesome evidence was inside.

But Westbrook argued that the prosecution would need to prove that the body was in the Avalanche, that Holland was aware of it and that he killed Miller.

Although he conceded in court that Holland ‘was caught while running from police’ for his outstanding crimes, he told reporters that Holland intends to plead not guilty.

Westbrook told reporters outside the courtroom that prosecutors had not proven Hollan ‘had knowledge of what was in the Avalanche, and that he intentionally led police to the evidence.’

‘Why would he do that?’ the defense attorney asked.

But Judge Harmony Letizia denied Holland bail, saying that the ‘presumption is great that Mr. Holland committed murder,’ and ‘proof is evident’ before scheduling his next court hearing for January 27.

Holland’s attorney asked Ricardo Auerbach, the police detective who found Miller’s detached head, if he had properly obtained a warrant to search the Avalanche before the discovery was made.

Auerbach said it was standard to inventory the contents of a stolen car before it is impounded and towed away as evidence, and that he opened the cooler containing the head after he smelled a rotting odor like ‘decay or fish.’

Sanborn said that a more thorough search was held off until a warrant was obtained. 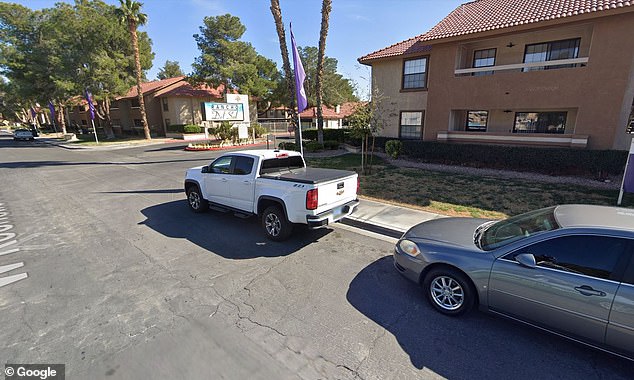 Police caught up to fleeing Holland on the 4200 block of Rochelle Avenue, pictured 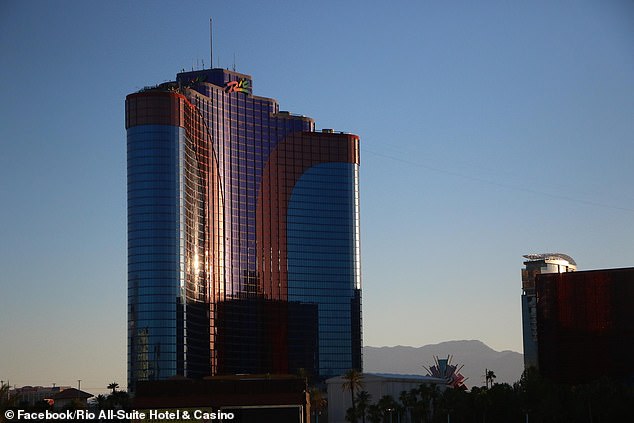 Holland was first pulled over by police near the Rio All-Suite Hotel & Casino, pictured

Pesci listed Holland’s long list of convictions, which date back to the 1980’s and spread across the states of Nevada, California and Texas, according to Newsweek.

His most recent arrest warrant for embezzlement, identity theft, issuing false checks and theft has been out since May 2019. He posted $5,000 bail before failing to return to court.

In 2000, he was convicted for felony theft charges in Las Vegas, and ended up serving prison time.

In 1997, Holland was convicted for assault with a deadly weapon and resisting arrest causing substantial bodily harm.

And in 1991, he was convicted of attempted escape and aiding in an escape.