The government is asking schools across Britain to stay open through the Easter holidays to look after the children of key workers who will still be needed in the fight against coronavirus.

All schools were closed to most children from March 20, with millions told to stay at home in a bid to beat the pandemic, piling pressure on struggling families.

The only pupils still expected to attend school are those seen as vulnerable, alongside the children of key workers so they can continue to work.

The Easter holidays are rapidly approaching, and children are due to begin their break in England and Wales on April 6, in Scotland on April 3, and in Northern Ireland on April 9.

But guidance published by the government states that schools should stay open, if possible, for this period to ensure key workers can still get to their jobs, as the country continues to battle the deadly pandemic.

It reads: ‘Where possible, we would encourage childcare providers, schools and colleges to continue to look after critical workers’ children and vulnerable children throughout the Easter holidays.’ 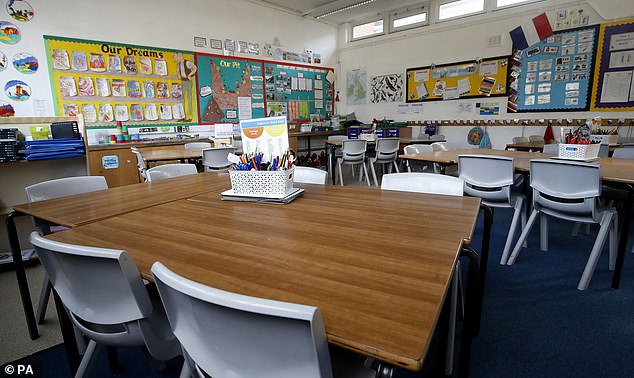 An empty classroom at Manor Park School and Nursery in Knutsford, Cheshire, on March 24

Plans are also being drawn up to open ‘hub’ schools which will allow pupils to go to a school within three miles of their home – but not necessarily their normal one.

For example, in Kent about 50 ‘hub’ schools are expected to open during the Easter holidays – compared to more than 500 which were still open last week.

‘Skeleton’ schools are now catering for about 10 per cent of pupils, while emergency measures are being introduced to help poorer families access free school meals.

Earlier this month, Boris Johnson urged parents not to leave children with their grandparents, because the elderly are the most susceptible to the disease.

The Prime Minister also said on March 18 that all exams such as GSCEs and A-Levels due to take place in May and June will be cancelled. 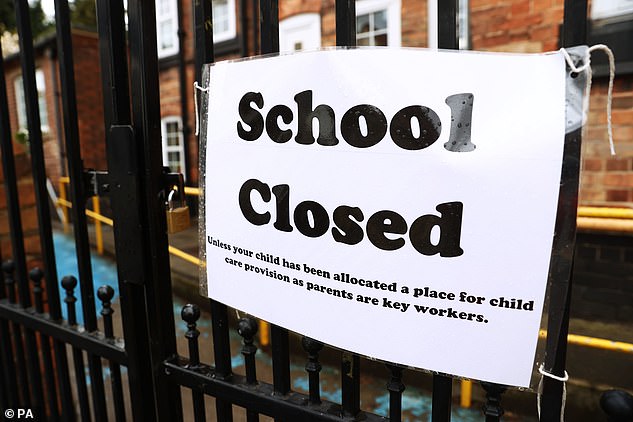 In Wales, teachers have already been urged to do what they can to keep schools open for NHS staff and carers during the two-week Easter holidays.

And there are plans in Northern Ireland for ‘hub’ schools in some areas to take pupils from a number of other schools over the Easter holidays for key workers.

The Welsh education minister Kirsty Williams has praised all school staff for keeping more than 700 schools open during the coronavirus epidemic.

The children of key workers can continue to go to school even though many of their schoolfriends will be staying at home due to the UK-wide lockdown.

The minister said she was not asking school staff to put themselves at risk and urged teachers to follow Government guidance to make schools safe.

She also confirmed that the provision of assistance to families of children in receipt of free school meals would include the Easter school holiday period.

The country’s education minister Peter Weir had asked parents to send their child to school only as a ‘last resort’ – advice which appears to be being followed. 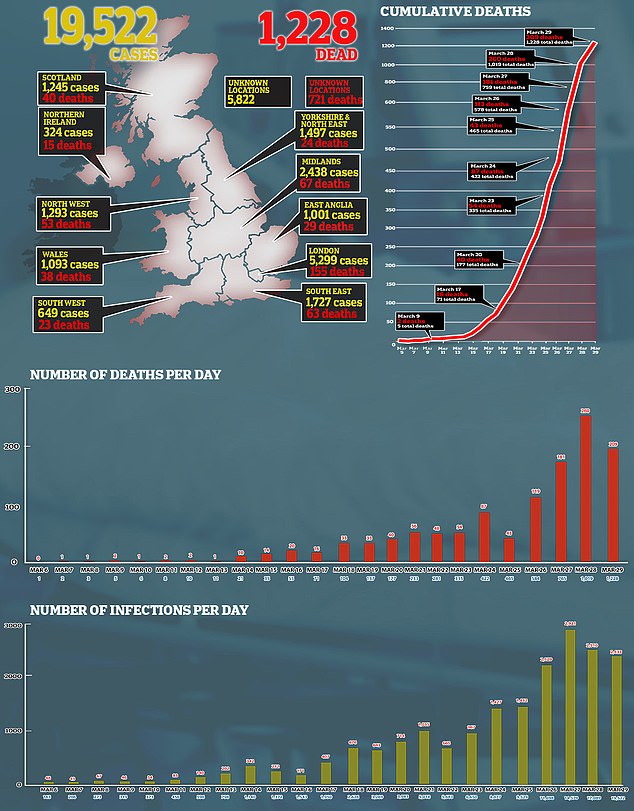 It comes as the head of the Royal College of Physicians revealed around one in four NHS doctors are off work sick or in isolation.

Meanwhile Dominic Cummings, the Prime Minister’s chief adviser, has become the latest person in Westminster to self-isolate after developing symptoms.

He joins Boris Johnson, Health Secretary Matt Hancock and England’s chief medical officer Professor Chris Whitty, who are all in self-isolation due to the virus.