The U.S. Marine relieved of his command for calling out his superiors over the disastrous Afghanistan withdrawal that led to the deaths of 13 service members said Sunday he was officially resigning.

In a tell-all video posted on social media, Lt. Col. Stuart Scheller acknowledged he was sacrificing a comfortable retirement by criticizing the way the withdrawal was handled.

“I could stay in the Marine Corps for another three years, but I don’t think that’s the path I’m on. I’m resigning my commission as a United States Marine, effective now,” Scheller said. “I am forfeiting retirements, all entitlements, I don’t want a single dollar. I don’t want any money from the VA. I don’t want any VA benefits [even though] I’m sure I’m entitled 100%.”

Scheller ignited a firestorm of controversy Thursday for posting a less than five-minute video in which he went after top military brass for not taking responsibility over an ISIS attack in Afghanistan that resulted in the deaths of 11 Marines, an Army soldier, a Navy corpsman and 169 Afghans.

“I’m not saying we need to be in Afghanistan forever, but I am saying, did any of you throw your rank on the table and say, ‘Hey, it’s a bad idea to evacuate Bagram Airfield, a strategic airbase, before we evacuate everyone’?” Scheller said last Thursday. “Did anyone do that? And when you didn’t think to do that, did anyone raise their hand and say, ‘We completely messed this up’?”

Speaking to the pushback he had received from that video, Scheller said all he was asking for was “accountability of my senior leaders when there are clear obvious mistakes that were made.”

“I’m not saying we can take back what has been done. All I asked for was accountability, for people to comment on what I said and to say, ‘Yes. Mistakes were made.’ And had they done that I wouldn’t have gone back into rank-and-file, submitted, and accomplished what I wanted,” Scheller said.

Scheller said that when asked by his boss the following day, what he was trying to accomplish, he told him he wanted senior leaders to accept accountability. 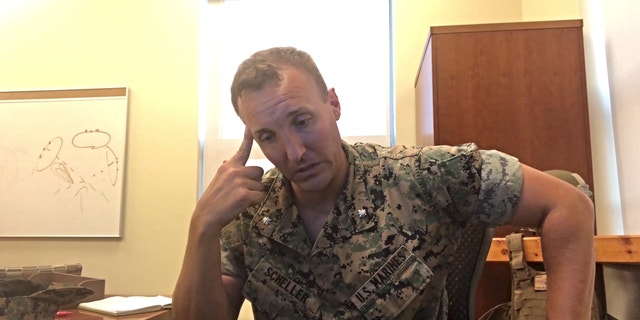 Marine Lt. Gen. Stuart Scheller is demanding senior U.S. leaders hold themselves accountable for actions made during the U.S. Military’s withdrawal from Afghanistan that led to the deaths of 13 servicemembers.
(Scheller video screenshot)

“I think them accepting accountability would do more for service members with PTSD and struggling with purpose than any other transparent piece of paper or message. And I haven’t received that,” Scheller said.

He reiterated that he was forfeiting a potentially $2 million pension fund for the rest of his life by going through with his actions, but warned that going after “stability and money” makes one a “slave to the system” and makes you compromise on your principles.

“I don’t need a single dollar. I just need every single person that’s willing to go back outside the wire every single day to wear a blue-collar and just go into work every single day and feed their families. Those are the people that I need,” Scheller said. “Follow me and we will bring the whole f***ing system down. I am honorable and you can ask any Marine who served with me for 17 years. I dare you to ask them all and find out what I’m made of. We’re just getting started.”

Scheller could not be reached, despite multiple attempts by Fox News. His father, Stuart Scheller, Sr., told The New York Post Sunday that his son won’t talk to reporters until he finishes his “formal” exit from the Marines.