Facebook CEO Mark Zuckerberg has today backed the lockdown and expressed his concerns that easing measures ‘too quickly’ will ‘guarantee future outbreaks’.

Musk, who has often made outspoken and even inflammatory comments on conference calls and on Twitter, said in comments to analysts on Tesla Inc’s earnings call that it was ‘fascist’ to say people cannot leave their homes.

He said:’This is not democratic, this is not freedom. Give people back their goddamn freedom.’ 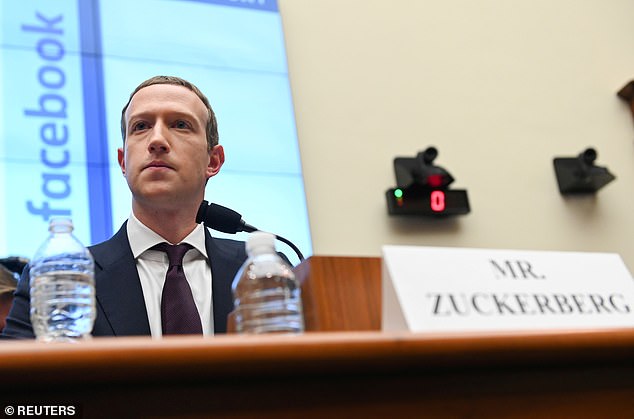 Zuckerberg, on the other hand, in comments on Facebook’s own earnings call on Wednesday, warned of the consequences of easing lockdown measures and said the economic fallout from the pandemic would last longer than people are currently anticipating.

Zuckerberg said: ‘I worry that reopening certain places too quickly before infection rates have been reduced to very minimal levels will almost guarantee future outbreaks and worse longer-term health and economic outcomes.’

Facebook, the world’s largest social network, on Wednesday said usage rose during the first quarter amid the widespread lockdowns, although ad revenue plunged in March. 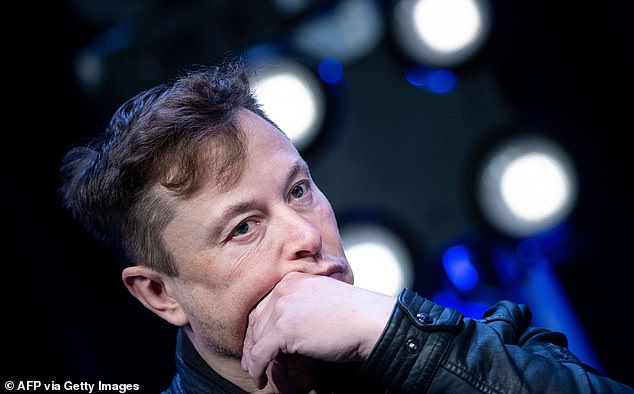 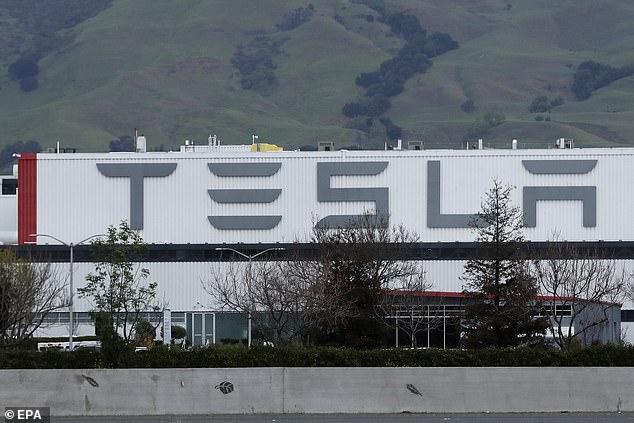 Alameda County, where the factory  (pictured) is based, on Wednesday extended stay-at-home orders until May 31 and vehicle manufacturing is not considered essential

They also saw an uptake of 10 per cent in the number of users using their products such as Facebook, Whatsapp and Instagram during the lockdown – now at 2.6 billion people a month.

During the call the company stated that they would expect to ‘lose at least some of this increased engagement when various shelter-in-place restrictions are relaxed in the future’.

Both Tesla Inc. and Facebook are based in the San Francisco Bay area, which was out front in trying to slow the virus’ spread, with the region’s seven counties issuing a joint shelter-in-place order before California issued a statewide order. 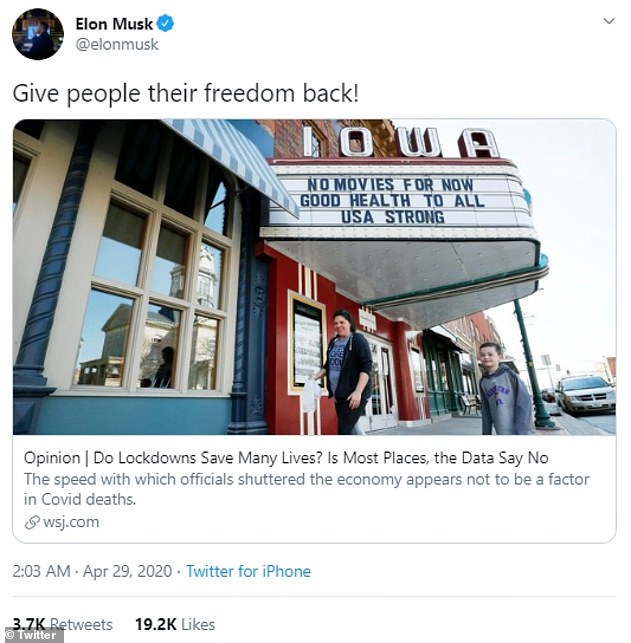 Alongside a link to a Wall Street Journal op-ed about whether lockdowns are saving lives, Musk tweeted: ‘Give people their freedom back!’

Electric carmaker Tesla and social media network Facebook have had different experiences under the lockdown.

Tesla had initially resisted efforts by California authorities to shut its plant in the Bay Area under the lockdown, until agreeing on March 19 to suspend production. Even so, Tesla on Wednesday reported its third profitable quarter in a row.

Shares of the company were up more than 9 per cent at $873 in extended trade, just a day after Detroit-based rival Ford Motor Co reported a $2 billion first-quarter loss and forecast losing another $5 billion in the current quarter.

Musk did not mince words in criticizing the lockdowns.

He said: ‘So the extension of the shelter-in-place or, frankly, I would call it, forcibly imprisoning people in their homes against all their constitutional rights, in my opinion, breaking people’s freedoms in ways that are horrible and wrong and not why people came to America or built this country. 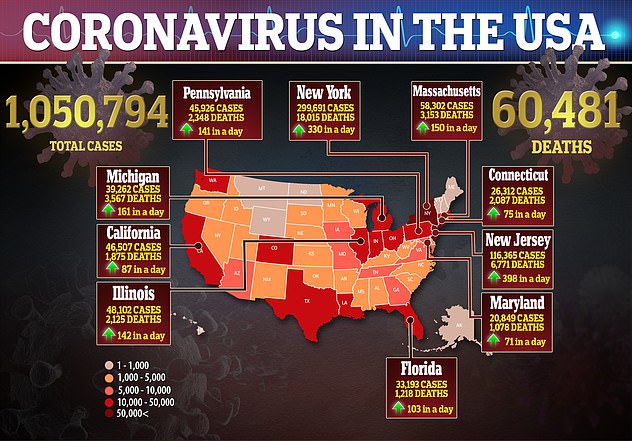 ‘It will cause great harm, not just to Tesla, but to any companies. And while Tesla will weather the storm, there are many small companies that will not.’

Zuckerberg and Musk, who is also chief executive of rocket company SpaceX, have had differences in the past. In 2017, a war of words broke out between the duo over whether robots will become smart enough to kill their human creators.

‘I’ve talked to Mark about this. His understanding of the subject is limited.’ Musk tweeted at the time about Zuckerberg, who downplayed Musk’s warnings about the danger of artificial intelligence.

In May 2018, Musk made waves on another earnings call when he refused to analysts’ questions, saying that ‘boring, bonehead questions are not cool.’ He later apologized for his remarks.