R.I.P. the truth about Dr David Kelly: Lord Hutton was accused of whitewashing his inquiry into the death of a scientist – and the ‘sexed-up’ Iraqi dossier. Now, as he dies at 89, MILES GOSLETT recalls one of the great political scandals

At midday on Friday, July 18, 2003, Lord Hutton was working quietly in his office in the House of Lords when he took a call from Charles Falconer, the Lord Chancellor, which would reshape his 50-year legal career and book him a place in British political history.

Falconer was ringing on behalf of his former flatmate, Tony Blair, to ask Hutton to chair an inquiry into the death of Dr David Kelly, a government weapons inspector who’d been found dead in an Oxfordshire wood at 9am that day.

Dr Kelly had been unmasked by officials a week previously as the assumed source of a highly damaging BBC report which suggested Blair’s government had ‘sexed-up’ the case for the Iraq war. 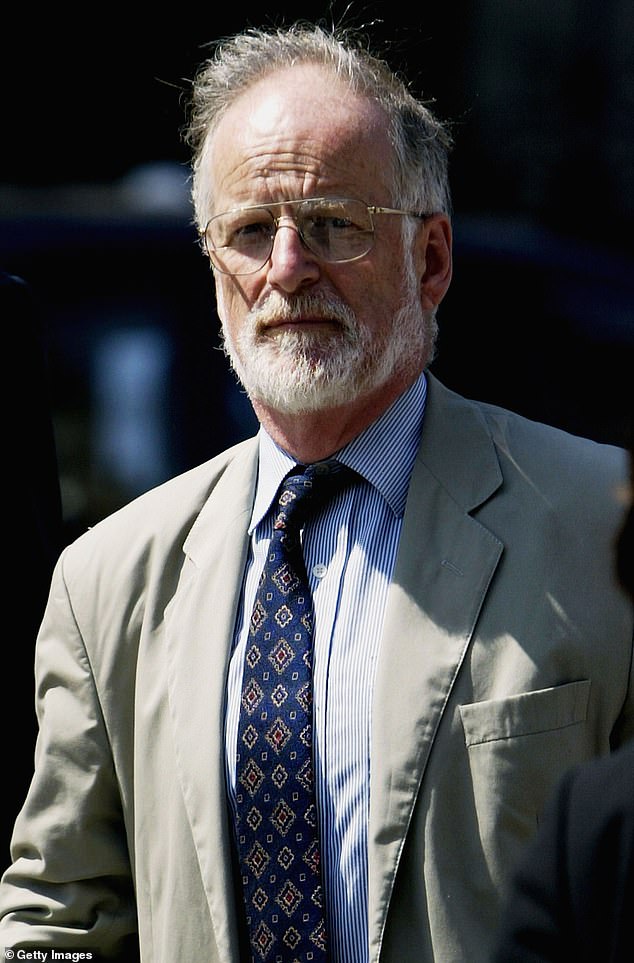 He always denied being the BBC’s prime source, yet its report added to mounting questions about the existence of the infamous weapons of mass destruction (WMD), used by the then Prime Minister to justify sending British troops into the conflict.

Thrust into the limelight against his will, Dr Kelly’s sudden death — which some believed might be murder — threatened to derail Blair’s premiership. The stakes could not have been higher.

Hutton, then 72, was a former Lord Chief Justice of Northern Ireland who had been a Law Lord since 1997. The product of a middle-class Protestant Ulster family, he had won scholarships to Shrewsbury School and Balliol College, Oxford, and he was unequivocally an Establishment man. Naturally, he agreed to do his duty on the spot.

Last week, 17 years after he took that fateful call from Charles Falconer, Lord Hutton died at the age of 89. But his bombshell report will live long in the memory, not for shaking the government to its foundations but for exonerating it of virtually any blame and seeing off its accusers with devastating efficiency.

Within 24 hours of its publication on January 28, 2004, Andrew Gilligan, the journalist behind the BBC report, had resigned.

And his was only the most minor of the scalps Hutton claimed: both the BBC’s director-general, Greg Dyke, and its chairman, Gavyn Davies, were forced to go, too. 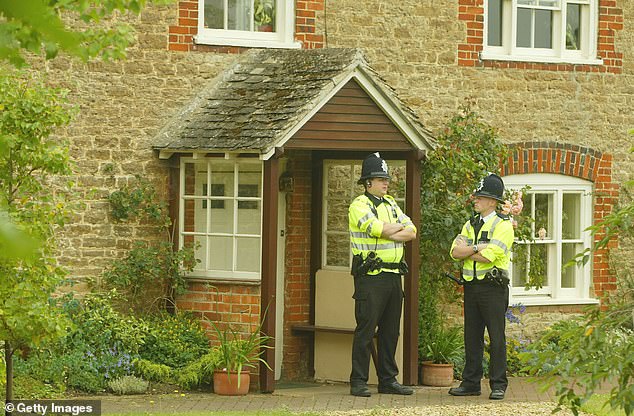 Firstly, it was surprising to discover that Hutton was asked to chair his inquiry less than three hours after Dr Kelly’s body was found, for no medical professional had yet examined it, there had been no formal identification, and no one knew how he had died. Police are seen standing outside his home in July 2003

To appreciate how one man could pull off such an extraordinary reversal of fortune, we need to go back to that August day in 2003 when the Hutton Inquiry began hearing evidence at the Royal Courts of Justice in London.

Interest from the public in the eight-week examination of events which led to Dr David Kelly’s death was so intense, it quickly became a summer spectacle. How could it not, when the circumstances of Dr Kelly’s death were believed by many to be so suspicious?

Witnesses included Blair himself; his controversial spin merchant Alastair Campbell, who had been intimately involved in the Dr Kelly affair; and Sir Richard Dearlove, head of MI6 and a man whose voice had never been heard in public before. It was exceptional.

On January 28, 2004, Hutton delivered his findings. Over 750 pages comprising 13 chapters and 18 appendices, he determined that Dr Kelly had taken his own life.

‘The principal cause of [Dr Kelly’s] death was bleeding from incised wounds to his left wrist which Dr Kelly had inflicted on himself with the knife found beside his body,’ he wrote.

His report added: ‘It is probable that the ingestion of an excess amount of co-proxamol tablets coupled with apparently clinically silent coronary heart disease would have played a part in bringing about death more certainly and more rapidly than it [sic] would have otherwise been the case.

‘I am further satisfied that no other person was involved in the death of Dr Kelly.’

Having decided that Dr Kelly was responsible for his own death, Hutton lambasted Andrew Gilligan, the BBC journalist who had met with Dr Kelly in May 2003 and subsequently reported the allegation that the Government had ‘sexed up’ the case for war. (As we have seen, Gilligan quit the BBC immediately.)

He also castigated the BBC’s management and editorial processes, labelling them ‘defective’ — which ended the careers of Dyke and Davies.

At the same time, Hutton cleared the Government of any ‘underhand strategy’ to name Dr Kelly as Gilligan’s source. In Hutton’s view, the case for war had not been ‘sexed up’, as Gilligan had claimed, but reflected the available intelligence. 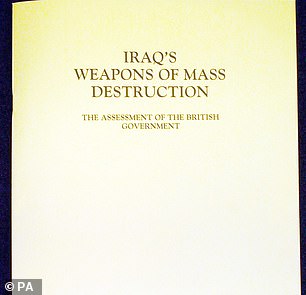 Thrust into the limelight against his will, Dr Kelly’s sudden death — which some believed might be murder — threatened to derail Blair’s premiership. The stakes could not have been higher

Having absolved the Government, Hutton said that any failure of intelligence assessment was outside the remit of his inquiry, essentially allowing the intelligence services to escape censure.

These findings were widely derided, including by this newspaper. The overwhelming view was that his inquiry had been an Establishment whitewash.

Hutton soon retired from public life and was seldom heard of again, but the sense of rage against Blair for sending the Armed services into battle on what was considered a false prospectus has only intensified since then.

Indeed, given that no WMD have ever been found in Iraq, this easily remains one of the most toxic political controversies since World War II.

As for the claim that Iraq could attack Britain in 45 minutes, then-Foreign Secretary Jack Straw admitted to a committee of MPs in October 2004 that it was untrue, yet it formed a key part of the Government’s strategy for war.

It was followed by the so-called ‘dodgy dossier’, published under the direction of Alastair Campbell in February 2003. Campbell’s staff lifted much of the material it contained from the internet — complete with grammatical errors — and presented it as their own careful analysis.

Added to all this, the notion that Dr Kelly’s death was mired in mystery has merely grown. Sadly, for Hutton, this heightened scepticism would appear to be his chief legacy.

In 2007, I embarked on a lengthy investigation into the Hutton Inquiry. What I found was that it was itself, to use Hutton’s own word, ‘defective’.

Firstly, it was surprising to discover that Hutton was asked to chair his inquiry less than three hours after Dr Kelly’s body was found, for no medical professional had yet examined it, there had been no formal identification, and no one knew how he had died.

If Hutton ever thought it strange to have been asked to preside over a matter so soon without a proper police inquiry, he never said a word about it.

Second, Hutton’s inquiry was fixed so that it would assume the status of a coroner’s inquest, the centuries-old proceedings used to establish how, where and when a sudden or unnatural death has occurred. The upshot is there has never been a full coroner’s inquest into Dr Kelly’s death. This has proved disastrous for public trust.

Third, Hutton’s terms of reference were so vague as to be oblique compared with what a coroner sets out to achieve. Also, unlike a coroner’s inquest, no witness who appeared at the inquiry was required to swear an oath before giving evidence. This removed the threat of anyone being found guilty of perjury.

In any case, Dr Kelly’s death certificate was registered more than five weeks before the Hutton Inquiry stopped hearing evidence, so Hutton may as well have not been running his inquiry.

As far as the authorities were concerned, they already ‘knew’ how Dr Kelly had died.

On top of this, Hutton excluded dozens of key witnesses, including Mai Pederson, a former U.S. Air Force officer and close friend of Dr Kelly who has revealed he had an arm injury which prevented him from holding a knife properly and that he suffered with ‘unexplained dysphagia’, meaning he couldn’t swallow pills. 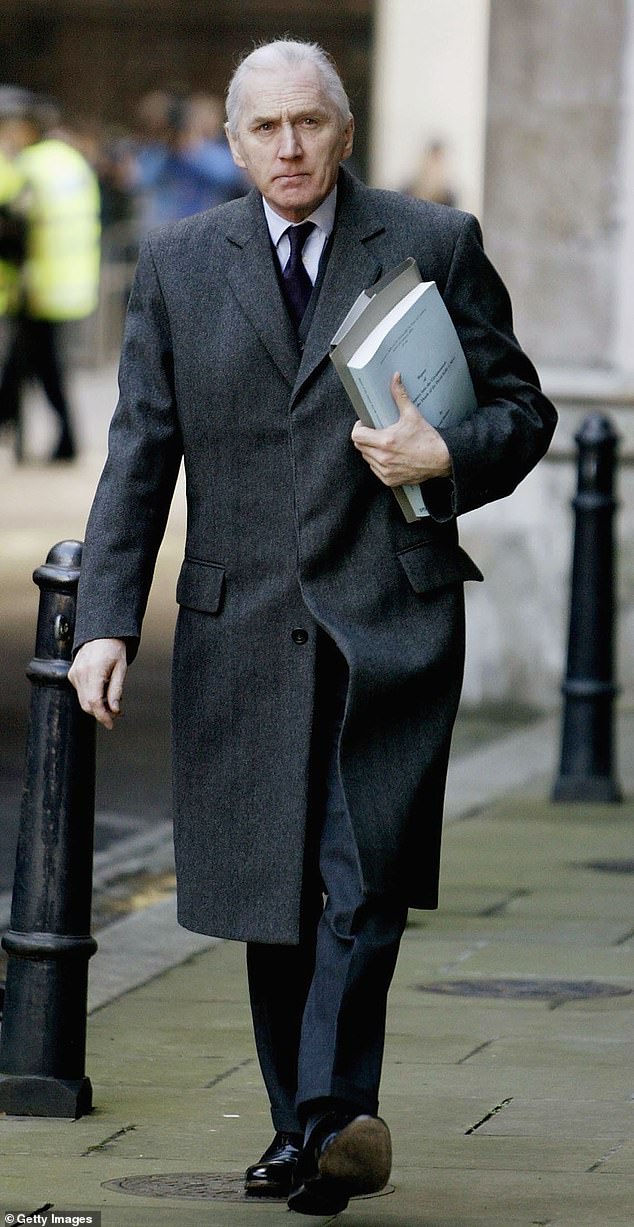 Questions also remain over whether he could have died by cutting his ulnar artery, as Hutton deduced. It is so small, many medical professionals have said it is impossible to bleed to death by cutting it.

Such electrifying points make the testimony of high-profile witnesses like Blair and Campbell almost irrelevant. Indeed, they were effectively red herrings.

There are other reasons speculation about Dr Kelly’s death has never evaporated. One is the discovery there were no fingerprints on the knife he allegedly used to kill himself — even though he wore no gloves. This was never mentioned at the Inquiry but was known to police.

When he had finished his report, Hutton made a secret request to the State.

He asked that all records which were not produced in evidence be closed to the public for 30 years and for all photographs of Dr Kelly’s body and all medical reports relating to his death to be sealed for 70 years.

Having served the Establishment so faithfully during his career, it is ironic to reflect that Hutton will be remembered by many as one of its victims, albeit by virtue of having been willing to do its bidding in its hour of need.

Miles Goslett is the author of An Inconvenient Death: How The Establishment Covered Up The David Kelly Affair.