Millions of factory farm chickens died in sweltering 45C sheds during record UK heatwave: Workers haunted with flashbacks from the ‘stink’ of ‘carnage’

Millions of factory farm chickens died during the recent country-wide heatwave, according to whistle-blowers.

The birds, which were confined to large farm sheds, died of heat exhaustion in temperatures of up to 45C, it has been alleged by industry whistle-blowers who say little was done to protect them from the heat.

Some producers made little to no effort to cool down the sheds for the animal’s welfare, according to the Independent.

Witnesses have claimed that the birds were panting and flapping in the heat which was even higher than usual due to the large amount of bird excrement as a result of diarrhoea, a warning of heat distress in chickens. 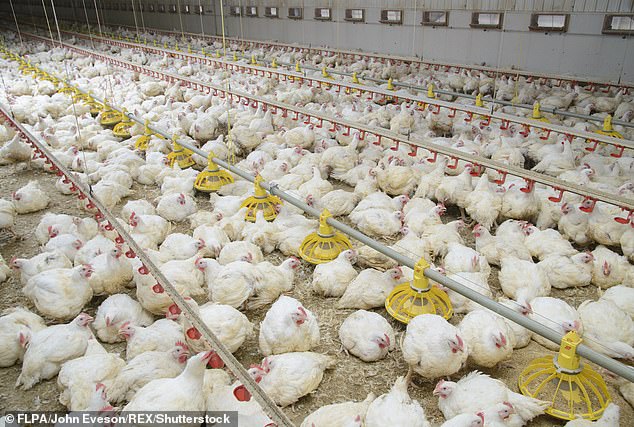 The birds, which were confined to large farm sheds, died of heat exhaustion in temperatures of up to 45C (Stock Image)

Anonymous insiders have said they are haunted by the scale and smell of the dead bodies of chickens that died.

One said: ‘I often find that I suddenly start crying and shaking.’

Other insiders claim the birds were ‘left to die in the heat’ and ‘written off’ as a cost instead of investing prevention measures, such as better ventilation in the industrial sheds.

‘Industry have worked closely with Defra (Department for Environment, Food and Rural Affairs) and other government agencies to support farmers at this devastating time and establish how farms can be quickly cleared and birds safely disposed of.

‘Mitigating measures exist to maintain the health and welfare of birds. As is the case for other industries, we are urging all poultry keepers to advance these measures to cope with extraordinary weather conditions in the longer term.’

The scale of the deaths has prompted an investigation by the Animal and Plant Health Agency and local government.

A spokesperson for Defra has said it is ‘deeply concerned’ about the recent events.

‘It is vital the health and welfare of animals are protected,’ they added.

‘The Animal and Plant Health Agency is working to support local authorities in investigating what took place and in taking any appropriate further action.’ 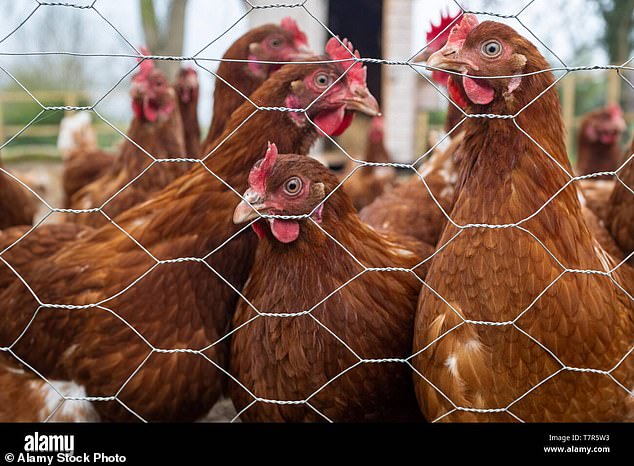 Animal rights organisations have said they are aware of the incident and that the latest cases were not unheard of.

Abigail Penny, Executive Director of the Animal Equality organisation said: ‘As the rest of the UK ground to a halt, avoiding public transport and the scorching sun, the meat industry failed to act.

‘This ‘business as usual’ approach in a national emergency caused hundreds of thousands of chickens to quite literally cook to death’.

A spokesperson for the RSPCA said anyone who fails to meet animals’ needs while in their care could face criminal action in court.

The extreme heat placed intense pressure on livestock across the UK.

James Mottershead, Poultry Board Chair and the National Famers’ Union said:  ‘While we have systems on farm to regulate the temperature inside of poultry houses the recent extreme weather has overwhelmed some of them.

‘It is truly devastating to witness any bird mortality and farmers continue to do all they can to look after their birds during these unprecedented and extreme temperatures.’

The incident is not the first of its kind, with similar reports of bird deaths emerging during a heatwave in 2019. 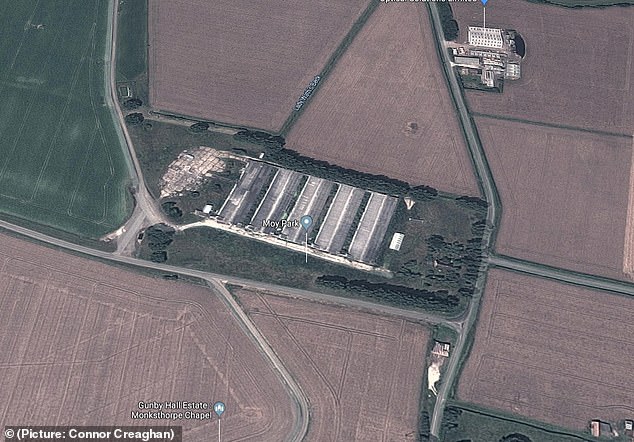 The incident is not the first of its kind, with similar reports of bird deaths emerging during a heatwave in 2019 (Pictured Moy Park Farm in Newton on Trent) 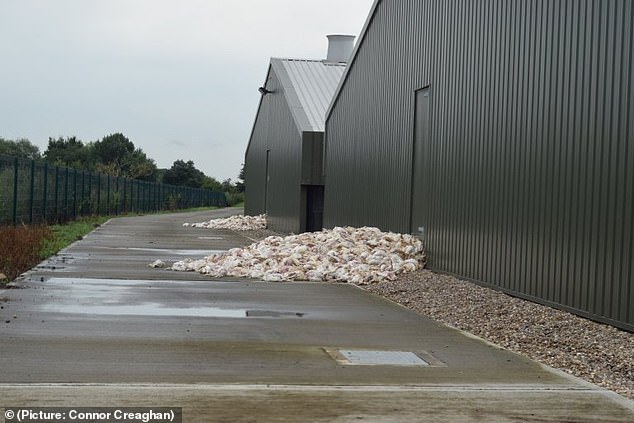 The heatwave last month saw record breaking temperatures across the country, with some places hotter than some of the world’s top beach destinations such as Hawaii, Jamaica, the Maldives and the Bahamas.

Famers were faced with the ‘significant challenge’ posed by the extremely dry weather as they tried to keep crops fully watered in the face of rising fuel, electricity and fertiliser costs during the heatwave.

One farmer on the Norfolk/Suffolk border said he would normally budget £80,000 for electricity to pump water around his crop fields, and that it had soared to £250,000 this season as a result of the weather.

‘And we grow about 1,200 acres of irrigated root crops – so that’s parsnips, potatoes, carrots and onions, and that’s where our significant challenge has arisen at the moment to try and keep those crops fully watered to ensure that they meet market specifications and indeed generate a yield.

‘We started irrigating our crops here very early this year in the beginning of April.

‘But it’s been this last two week period where evapotranspiration rates have been so incredibly intense that water has just poured through the crops.’