Birmingham: Supporters of Liz Truss have warned Conservative MPs that they could be booted from the party room if they vote against her tax cuts for the rich, despite the Prime Minister conceding she had failed to communicate the shock policy properly.

Late on Sunday, the London Telegraph, the paper most closely aligned with Truss, reported she would delay a vote on cutting the top tax rate. 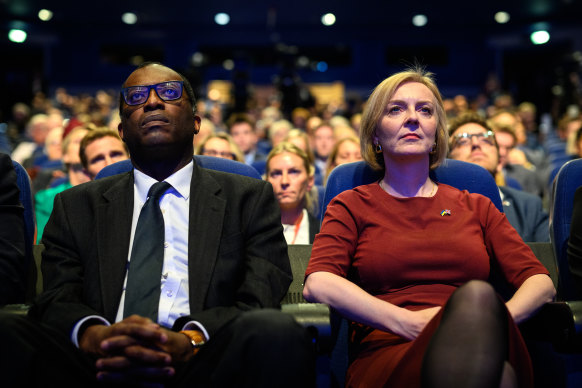 Earlier, she told the BBC that she should have laid the ground better before Chancellor Kwasi Kwarteng announced the abolition of the 45p tax rate for those on the highest incomes.

“I have learned from that,” Truss told the BBC. “I will make sure in future we do a better job of laying the ground.”

But she also appeared to put some distance between her and her close friend, saying it was Kwarteng’s decision to abolish the top rate of tax and that it was not taken to cabinet.

“It was a decision the chancellor made,” she said.

It was a choice that forced the Bank of England to intervene to prop up the bond market, while fears that the bank will hike interest rates caused mortgage lenders to withdraw their cheapest deals, causing turmoil for homebuyers.

But Truss said she was sticking by her economic growth plan, as she headed to the Conservative Party Conference in Birmingham to address the party members who endorsed her to become prime minister earlier this month.

The conference was far from united.

Former cabinet minister and Tory intellectual heavyweight Michael Gove said he might vote against the tax cuts, criticising the plan to fund them with billions of pounds in borrowing as profoundly “unconservative”.

He said there was “an inadequate realisation at the top of government about the scale of change required”.

He added that Truss had no mandate to introduce the changes, which are a radical departure from the agenda Boris Johnson ran on in 2019, when he won an 80-seat majority, before being ousted by his party.

Grant Shapps, another cabinet minister sacked by Truss, also urged her to delay the tax cuts.

But Conservative Party chairman Jake Berry warned rebels they could be kicked out of the party room and denied the whip, or ability to vote with the government.

“Yes,” he said, when asked on Britain’s Sky if any dissenter could have the whip removed.

Get a note directly from our foreign correspondents on what’s making headlines around the world. Sign up for the weekly What in the World newsletter here.