New York City’s subway cars were notably quieter than usual on Wednesday after a warning from Mayor Bill de Blasio to avoid public transport due to the coronavirus pandemic.

De Blasio issued his guidance on Monday as more and more New Yorkers were diagnosed with the deadly virus.

While the MTA does not yet know numbers on how much ridership had dropped by, photographs of the subway system suggest a large number have heeded his advice.

There were still a decent number of commuters on the subway between 7am and 9am. 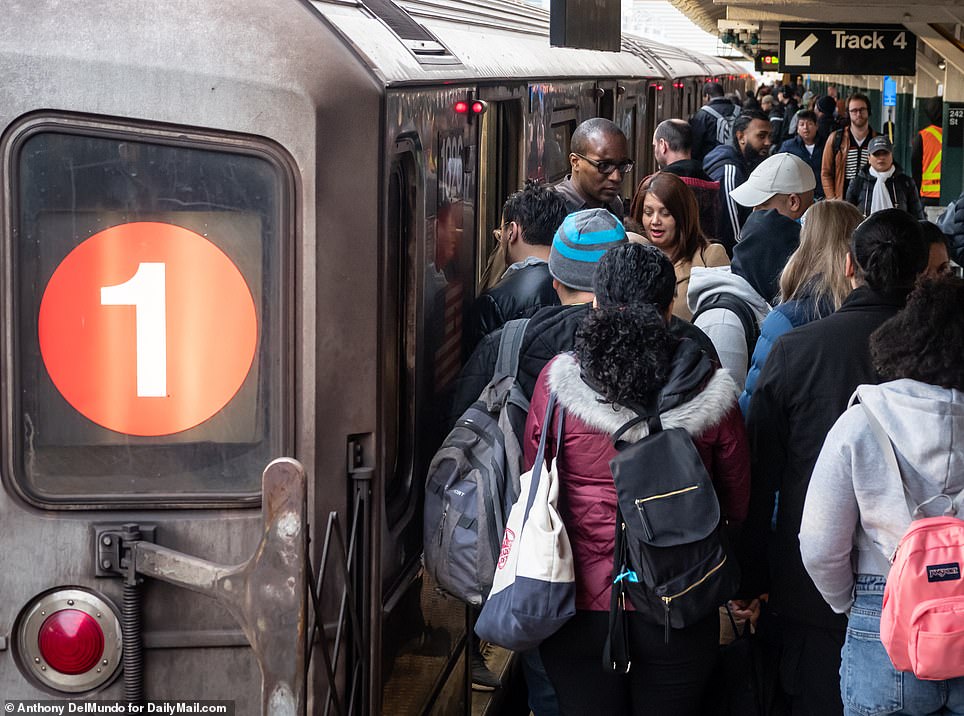 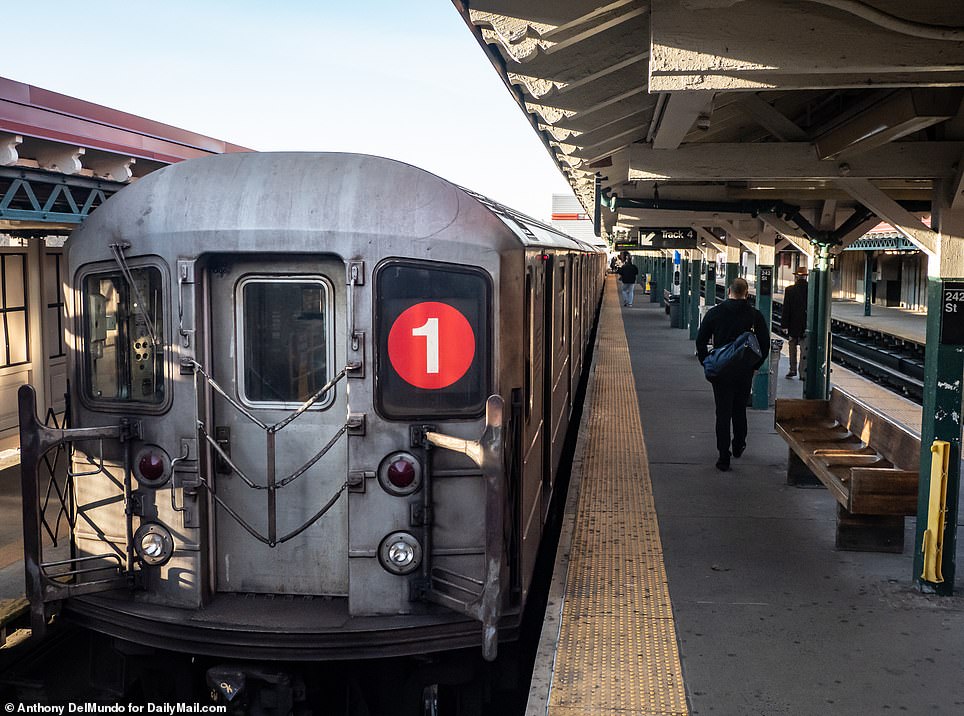 Rush hour on the 1 train at 242nd Street subway station in the Bronx (left) yesterday at 7.01am compared to today (right) fifteen minutes later 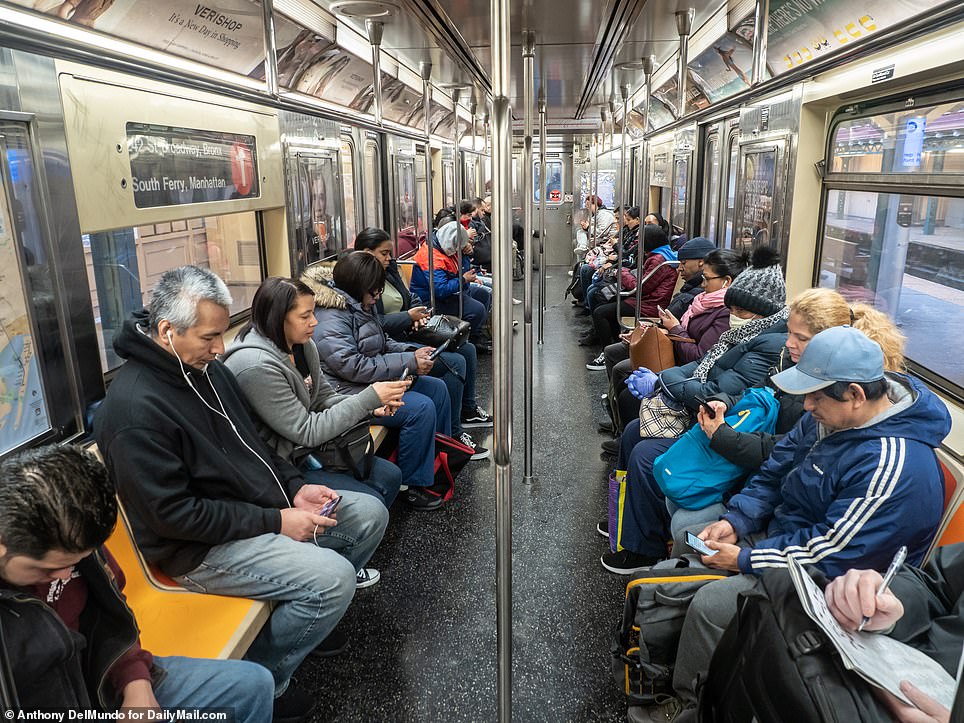 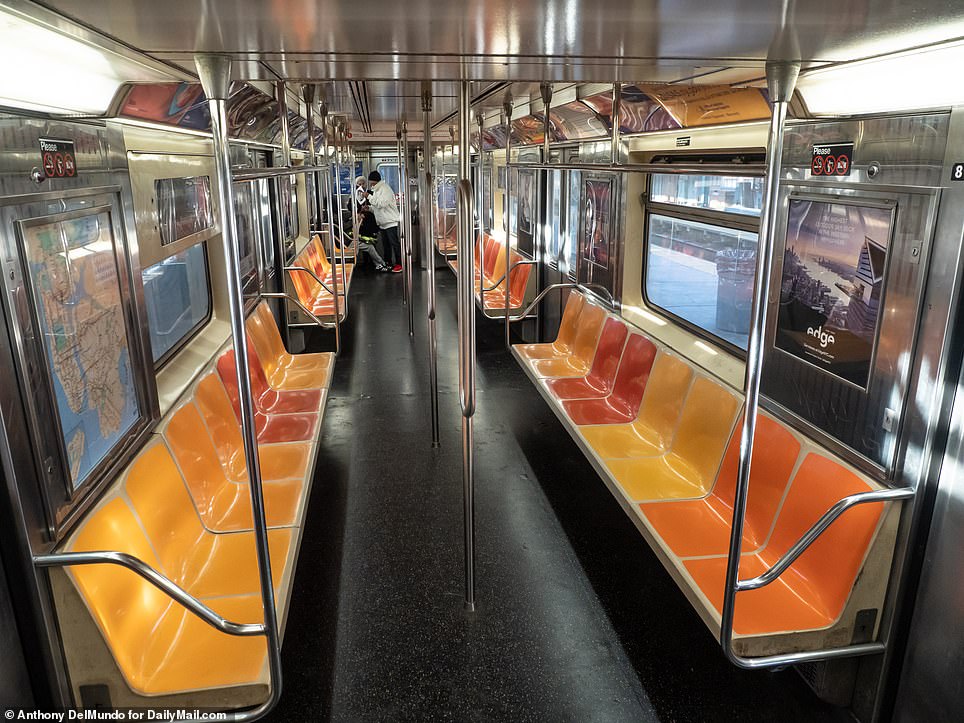 Speaking on Morning Joe, he also admitted plans were in place for ‘mobile pop-up quarantine hospitals’ if the ‘numbers don’t slow’.

Cuomo had been forced to declare a one-mile-radius ‘containment area’ in New Rochelle Tuesday as cases in the state reached more than 200 confirmed cases with more than 40 in New York City alone.

The sharp rises in cases has also forced Mayor Bill De Blasio to consider cancelling the St Patrick’s Day parade for the first time since 1782, following in Boston’s footsteps.

Mayor De Blasio said: ‘We’re talking it through with the parade committee. We have to really think about this one because it’s a beloved event, an important event.’

Cuomo said there were about 20 new confirmed cases in New York state, up from Tuesday’s count of 173. A spokesman for the Democratic governor said additional test results would be announced later Wednesday.

Hurricane Katrina killed nearly 2,000 people when it struck Louisiana in August 2005. The Federal Emergency Management Agency was accused of a sluggish response to the storm 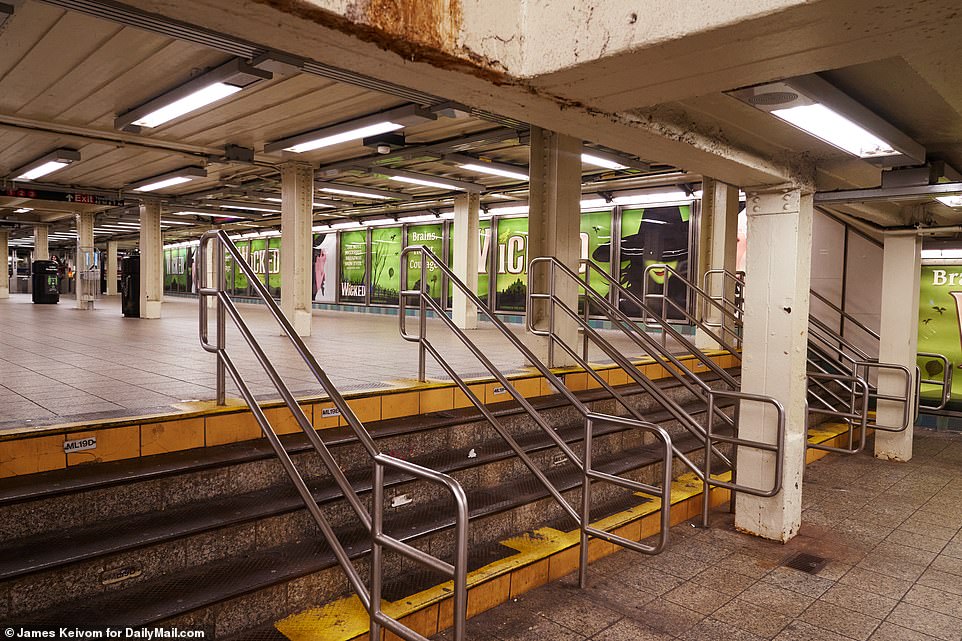 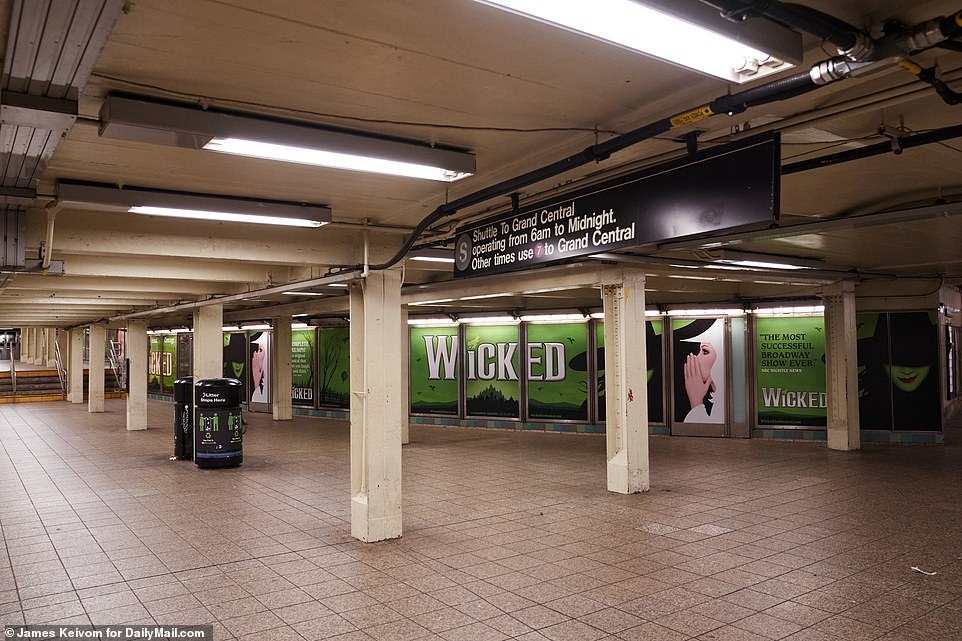 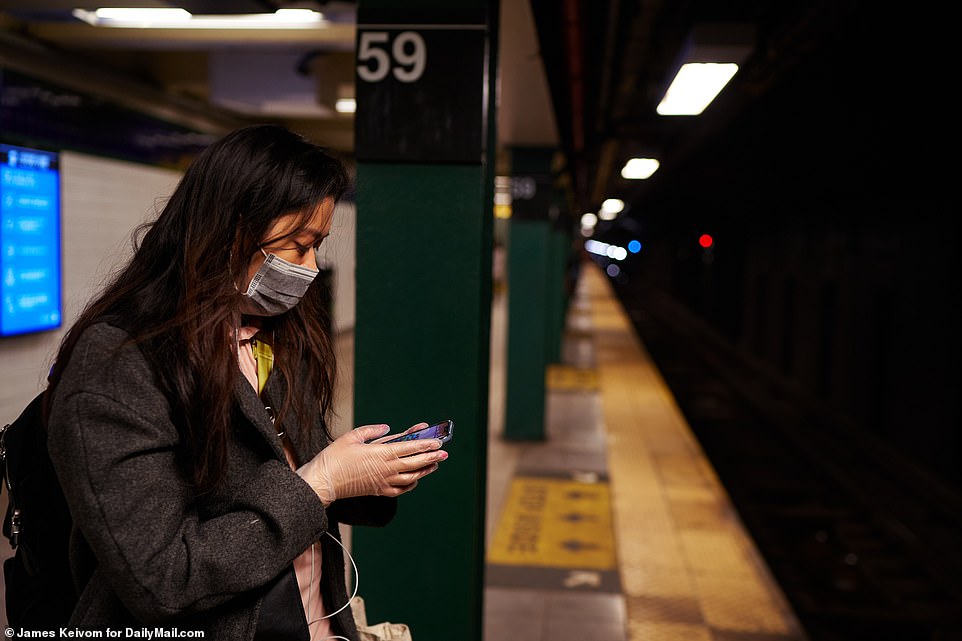 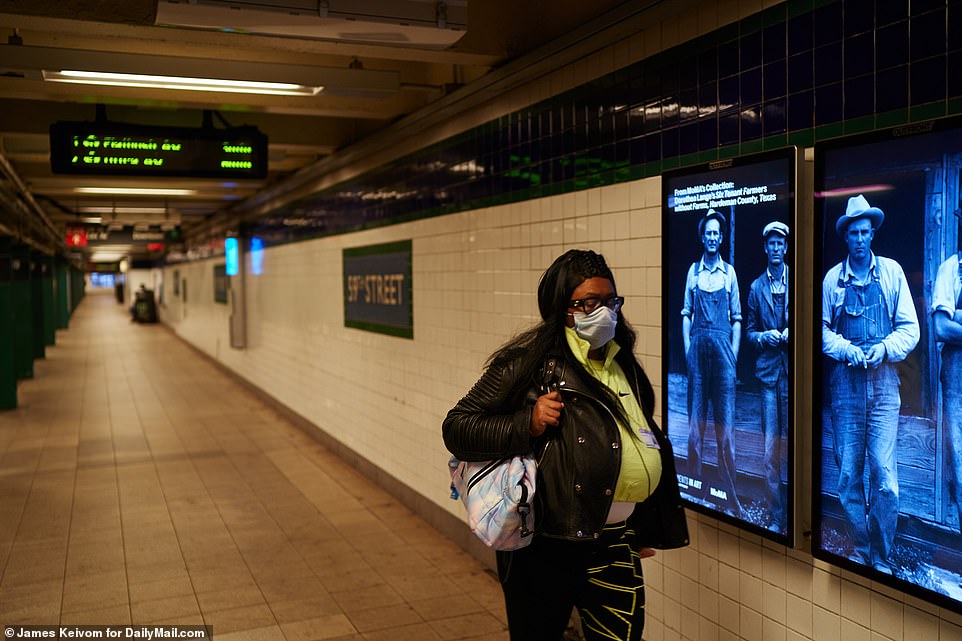 A commuter wearing a mask exits the 59th street station on Wednesday. There are no 48 cases of coronavirus in New York City 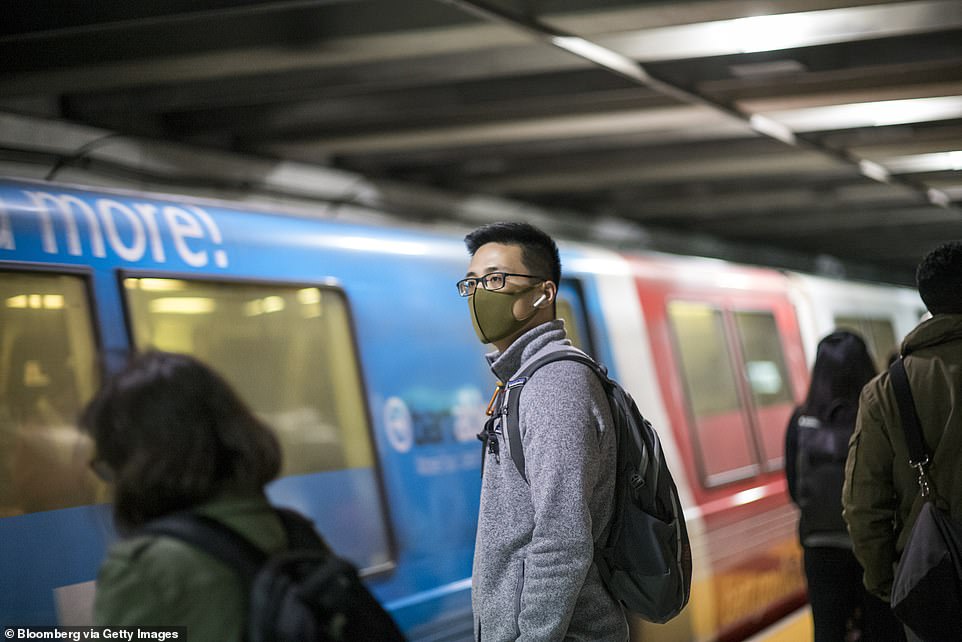 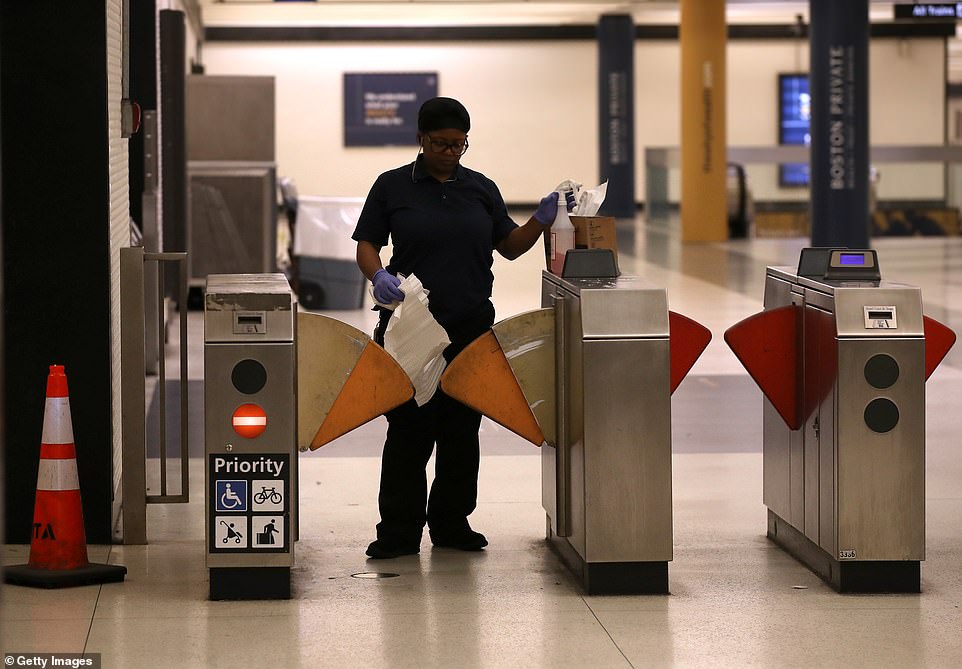 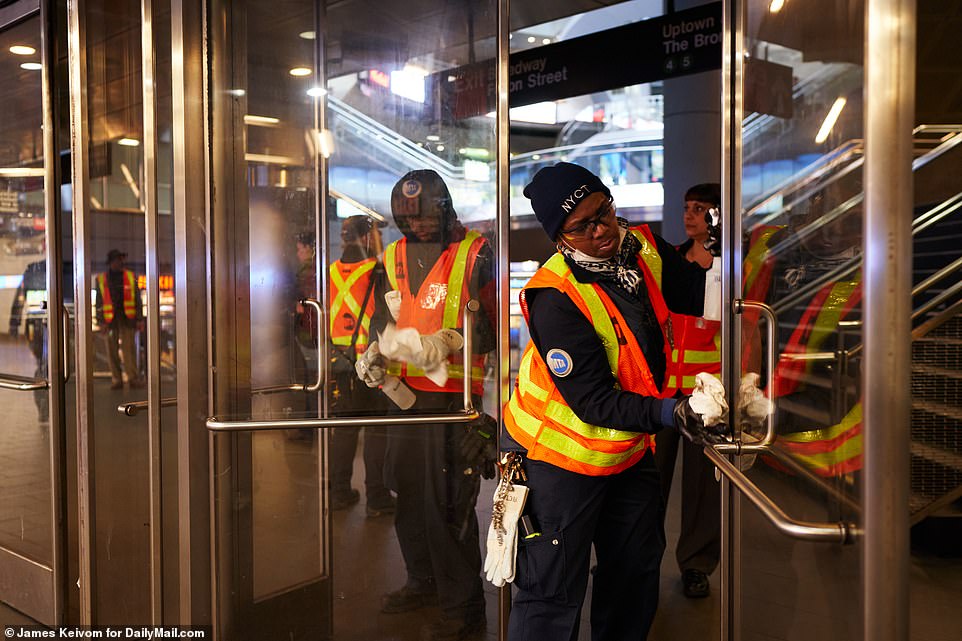 MTA workers cleaning the Fulton Street subway on Wednesday afternoon. The subway stations are being cleaned several times a day 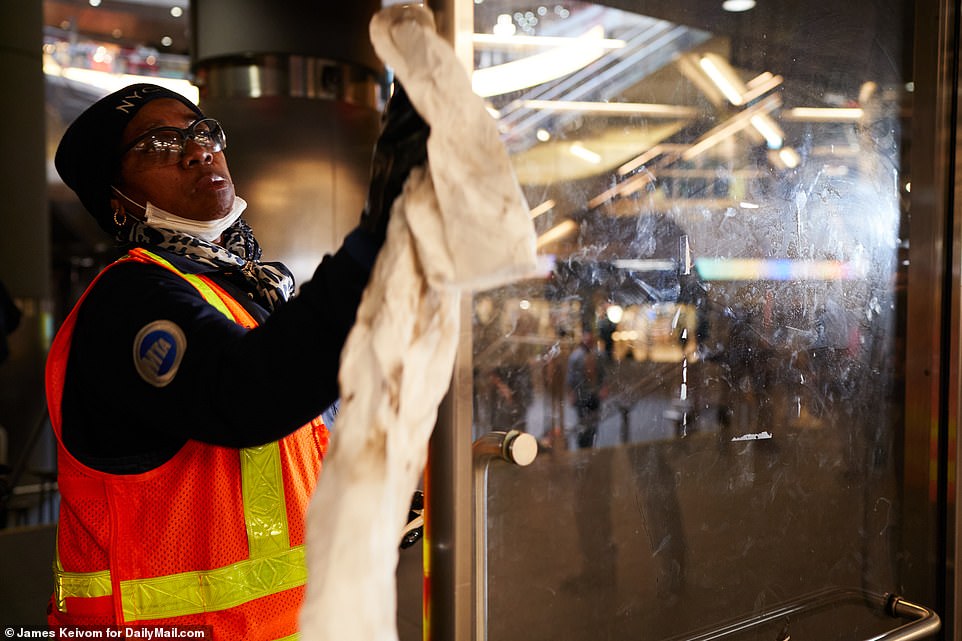 MTA workers cleaning the Fulton Street subway on Wednesday afternoon. The subway stations are being cleaned several times a day

Gov Cuomo urged business owners to stagger employees’ shifts or let them work from home to reduce the spread of coronavirus.

‘I’m going to ask them voluntarily to do telecommuting, two shifts, a morning shift and a late shift, and let people work from home voluntarily,’ Cuomo said on MSNBC’s ‘Morning Joe.’

He said Wednesday: ‘This is about reducing the density. You know, we talk about social distancing, we shouldn’t be more than six feet from a person.

‘You take a dense city, you take a New York City, there’s no such thing as social distancing, you’re always within six feet of a person. So we really need to talk more aggressive actions.’

SUNY and CUNY announced they will be closing March 19th to ‘reduce density’. The governor added: ‘This is not going away on its own, the spread is not going to stop on its own. 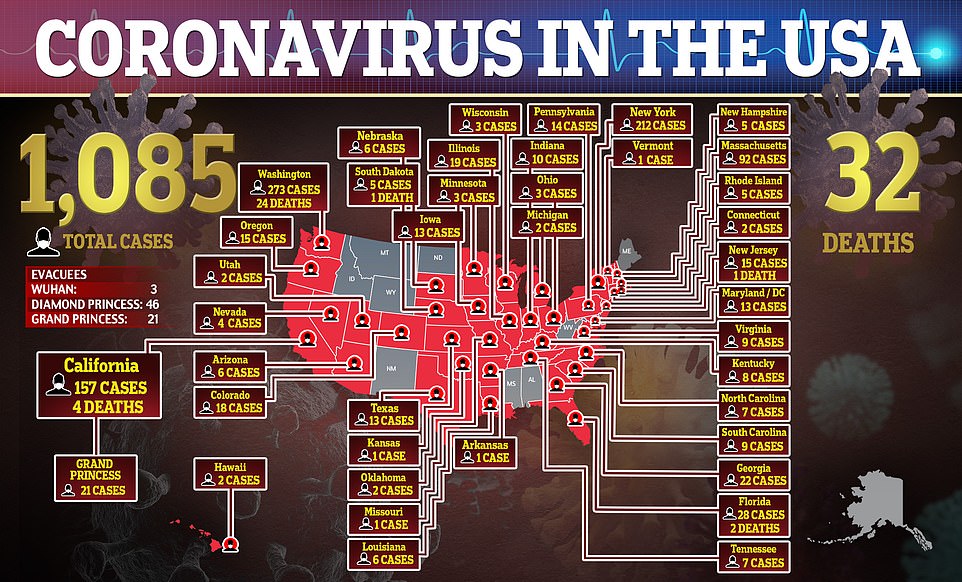 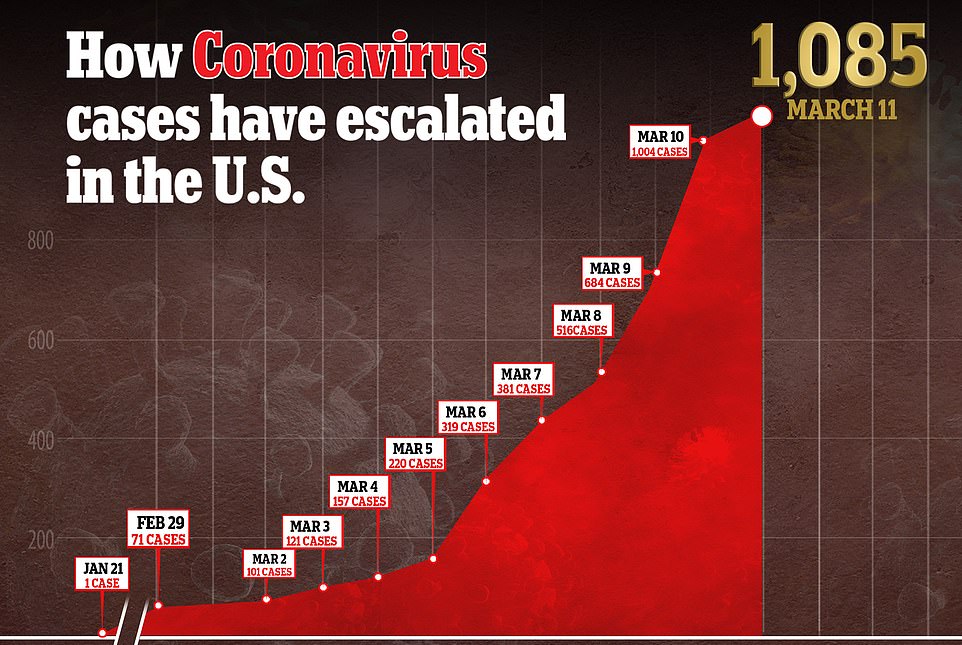 There are now 1,085 cases of coronavirus in the US and 32 people have died as a result of it

‘We have enough equipment, we have enough hospital beds but if these numbers don’t slow, we’re starting to plan backup quarantine hospital facilities, mobile pop-up hospitals if you will, to make sure we have the capacity for acute cases that need hospitalization.’

Several schools and houses of worship in New Rochelle, just north of New York City, are closed for two weeks, and Cuomo said the National Guard would be sent in to help deliver food to quarantined people.

The new coronavirus causes only mild or moderate symptoms such as fever and cough for most patients but can cause more severe illness for some, especially older adults and people with existing health problems.

The strategy of staggering work hours to reduce rush-hour crowding was widely used during the 1918 influenza epidemic.

State officials used a potentially unnerving term — ‘containment area’ — to describe the part of New Rochelle, north of New York City, where the closures will be enforced. But they stressed that this isn’t a lockdown.