Epidemiologists say the NSW government’s delay in locking down Sydney has put the entire country at risk from the infectious Delta variant of COVID-19 and have called for Victoria to close its border to travellers from all of NSW.

Epidemiologist adviser Mary-Louise McLaws said NSW’s response in locking down the metropolitan regions of the state on Saturday was “a week too late” and had “unequivocally put the entire country at risk’” from the Delta variant. 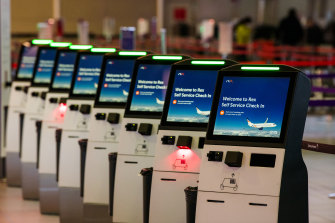 Victoria should stop anybody from NSW entering the state, some experts say.Credit:James Brickwood

The criticism comes as national cabinet held a crisis meeting on Monday night in the face of a possible national outbreak of coronavirus and resolved to make vaccination for aged care workers compulsory and to further modify the way hotel quarantine operates.

In NSW, the Premier, Gladys Berejiklian signalled frustration with the Federal government’s vaccine rollout, saying many more GPs needed access to jabs to be able to protect the state against outbreaks.

The Delta variant of the virus is now responsible for dozens of community cases across four states and Dr Bennett warned there was now no guarantee current or future outbreaks would be able to be contained, meaning vaccination of eligible Australians were vital. 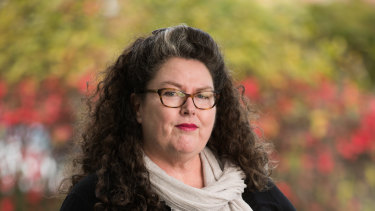 “This is real, the virus is going to come in whether we like it or not … the only thing we have control over is our vaccination uptake.”

Victoria is now one of the few states not working to contain a COVID outbreak or new cases, and the head of Monash University’s epidemiological modelling unit, James Trauer, is among those who say the state needs to do more to protect this status.

Victoria announced its most recent lockdown once 26 cases were detected in the community while NSW waited until it had recorded more than 80 cases, including many that had been infectious for days while in the community. Greater Sydney, the Central Coast, the Blue Mountains, Wollongong and Shellharbour were locked down on Saturday.

“If NSW is going to try a different approach, that’s up to them. But we do have to protect states like Victoria that have just gone through a two-week period of elimination,” Associate Professor Trauer said.

“A traffic light system no longer works for Delta because the virus can move too fast and you risk missing cases.”

Red zones mean that non-Victorian residents are not allowed to enter Victoria without an exception. As it stands, much of regional NSW remains an orange zone, meaning permit holders must isolate, get a COVID test within 72 hours and remain in self-quarantine until they receive a negative test result.

“The test isn’t foolproof for a start, and they could be incubating and positive a week later,” Professor Esterman said. “Victoria has managed to eliminate COVID yet again, so why would it like to import cases from NSW?”

He said while NSW’s contact tracing system had made it successful in the past containing outbreaks, its authorities had failed to recognise that this would not be enough to resist the Delta variant.

Prime Minister Scott Morrison has previously praised NSW for not rushing into lockdowns, but Professor Esterman said the praise was undeserved and Saturday’s stay-at-home orders should have been announced three or four days earlier.

Professor McLaws, an adviser to the World Health Organisation, backed calls for Victoria to enforce a hard border to NSW which would declare the entire state a red zone.

“A traffic light system no longer works for Delta because the virus can move too fast and you risk missing cases,” said Professor McLaws, who also backs a national response.

However, Professor Bennett said given the outbreak had already proven it could spread much further than regional NSW, testing was the key rather than additional measures for regional areas that are yet to see confirmed community cases. 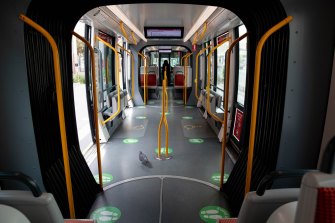 A pigeon is the only passenger on a deserted tram in Sydney’s locked-down CBD.Credit:Janie Barrett

The Sydney outbreak, which has been linked back to a unvaccinated flight crew driver, spread to Melbourne last week, when a Sandringham dry cleaner was exposed at a party. His boss at the dry cleaner later also tested positive. Meanwhile, a woman in Perth recently tested positive for COVID after returning from Sydney where she visited an exposure site in Bondi.

On Monday the Victorian government announced it was tightening its border controls to protect Victoria from NSW’s worsening outbreak, but stopped short of declaring the entire state a red zone, despite 130 locally acquired cases being reported there in less than two weeks.

Police patrols will be set up around Swan Hill, Echuca, Yarrawonga, Wodonga and Cann River, while helicopters would monitor the Hume Highway.

Victoria’s COVID-19 commander, Jeroen Weimar, said the Delta cases scattered across Australia highlighted the risk of people moving freely around the country during a pandemic. He described the situation in NSW as “fluid and unpredictable” and told reporters border controls were being assessed daily and urged Victorians to avoid interstate travel. 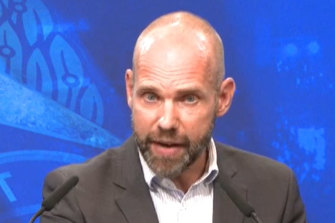 “We’d certainly encourage any Victorian, please do not travel to NSW at this time. It is an unpredictable situation,” he said.

Another outbreak linked to a leak from Queensland’s hotel quarantine has sent Northern Territory into lockdown. A miner in the Northern Territory tested positive for COVID-19 after he travelled on June 18 from Bendigo to Brisbane, where he was directed to quarantine under Queensland Health orders regarding Victoria at the time.

That outbreak sent several state and territory health authorities scrambling to trace 900 contacts who have departed the mine site after coming into contact with the infectious worker.

Kirby Institute virologist Professor Stuart Turville, who is studying coronavirus variants, said Delta was twice as infectious as earlier variants of COVID-19, and that more infectious variants would likely emerge in the coming months. Professor Turville said while he believed Australia had the processes to “crush this thing again” we were likely to see repeated outbreaks “again and again” until vaccine uptake increased.

He wants Australia to ditch the “1890s dynamic” of each state and territory responding to outbreaks separately.

“Back in the era of HIV they had a collection of national centres and I’m really wondering if the government should consider that in respect to the COVID response,” he said.

“This might help with issues around borders and melt the rivalries between states and get us back to really working together on a national approach.”

Burnet Institute epidemiologist Professor Mike Toole said in retrospect NSW should have locked down sooner because an earlier lockdown would have prevented a birthday party in western Sydney that turned into super-spreading event, and a hair salon in Double Bay from potentially exposing 900 clients to the virus.

Professor Toole said most concerningly, emerging research was suggesting the Delta variant increases the risk of hospitalisation across all ages.

One recent study in Scotland, undertaken by the University of Edinburgh, estimated the risk of being hospitalised with the Delta variant for an unvaccinated person was 85 per cent higher than it was for the highly infectious Alpha variant.

“It is more infectious and it looks as though, at least in Scotland, it is more severe,” Professor Toole said.