Nurse, 69, who complained of lack of PPE at the hospital where she treated a COVID-19 patient without an N95 mask dies from the virus a week before her retirement

A nurse who raised concerns about a shortage of personal protective equipment at the Missouri hospital where she worked died from coronavirus just one week before she was set to retire.

Celia Yap-Banago, 69, passed away on April 21 after caring for a COVID-19 patient at Research Medical Center (RMC) in Kansas City.

Yap-Banago had worked at RMC for 40 years and was due to retire on Tuesday, according to the National Nurses Union (NNU).

The union said she was part of a group of registered nurses who had expressed concerns about the hospital’s lack of preparedness in handing the coronavirus pandemic. 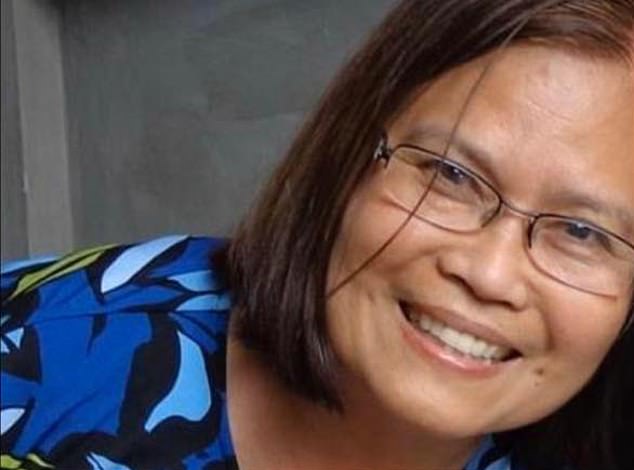 Celia Yap-Banago, 69, died from COVID-19 at her home in Kansas City, Missouri, on April 21 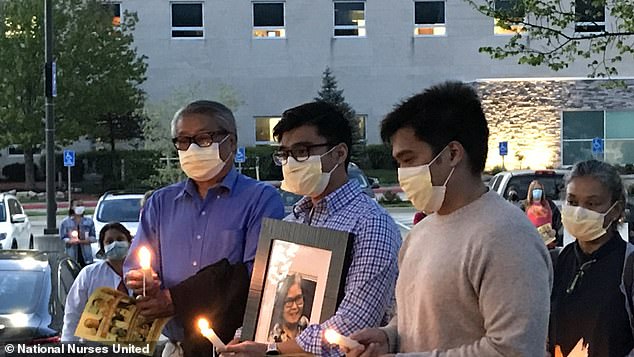 Yap-Banago’s husband of 34 years, Amado, and her two adult sons, Jhulan and Josh, are seen at a vigil held in her honor outside Research Medical Center in Kansas City on Thursday

The nurses claimed that the hospital had insufficient supplies of PPE for health care workers who needed it and that there had been delays in notifying nurses when they may have been exposed to infected patients.

Charlene Carter, a fellow registered nurse at RNC, said that she and Yap-Banago treated a patient last month who later tested positive for COVID-19 – and that they didn’t have N95 masks or other essential equipment at the time.

‘Celia was an amazing nurse that dedicated her service for countless years at Research and a dear friend to all of us,’ Carter told Newsweek.

‘I feel that I can speak for many nurses when I say that the loss of one of our dear fallen soldiers on the front line of this pandemic is more than devastating, it is a wake-up call.’

She continued: ‘Nurses have an instinctive conduct of being so selfless that I believe others don’t realize. No nurse should have to sacrifice their life in exchange for conserved profits by the rationing of proper protective equipment.

‘Nurses all over the country need proper protection every day so that we can continue to save patients’ lives while sparing our own.’ 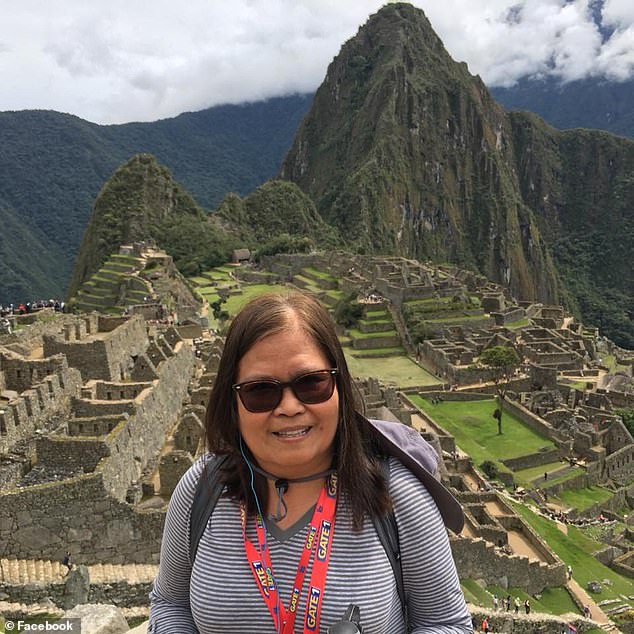 Yap-Banago had worked at RMC for 40 years and was due to retire on Tuesday, according to the National Nurses Union (NNU) 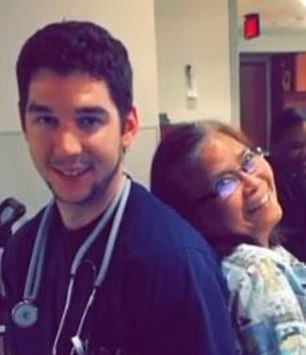 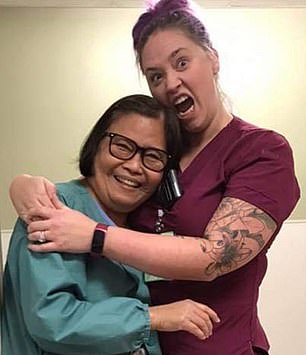 Yap-Banago’s coworkers at RMC described her as a kind soul and friend to all. ‘I feel that I can speak for many nurses when I say that the loss of one of our dear fallen soldiers on the front line of this pandemic is more than devastating, it is a wake-up call,’ nurse Charlene Carter said 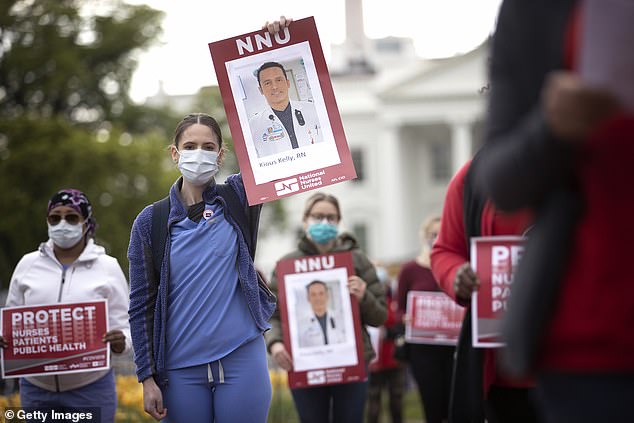 On the same day that Yap-Banago died, the NNU staged a protest (pictured) outside the White House to ‘call attention to the tens of thousands of health care workers who have become infected with COVID-19’ due to the lack of PPE

On the same day that Yap-Banago died, the NNU staged a protest outside the White House to ‘call attention to the tens of thousands of health care workers who have become infected with COVID-19’ due to the lack of PPE.

The union also organized a candlelit vigil in Yap-Banago’s honor outside RMC on Thursday.

‘We honor the life and career of Celia who gave so much of herself for her patients,’ NNU executive director Bonnie Castillo said.

‘No nurse, no health care worker, should have to put their lives, their health, and their safety at risk for the failure of hospitals and our elected leaders to provide the protection they need to safely care for patients.’

Among the more than 100 people who attended the vigil were Yap-Banago’s husband of 34 years, Amado, and her two adult sons, Jhulan and Josh.

Josh told the Kansas City Star that his mother began feeling ill about a month before her death and began isolating at home immediately, presuming she had the virus.

She tested was tested for COVID-19 on March 25, but the positive result didn’t come back until after she died.

Josh said his mother had expressed concerns about the rapidly surging number of COVID-19 cases in the US well before she herself got infected.

The son said he feared for his mother’s lives due to her age, but felt confident that she would recover given her decades of nursing experience.

Josh said Yap-Banago began to regain her strength toward the end and was even considering going to see a doctor to get cleared to return to work.

But on the night of April 21, the family went to check on her and discovered that her condition had taken a turn for the worse before she died at home. 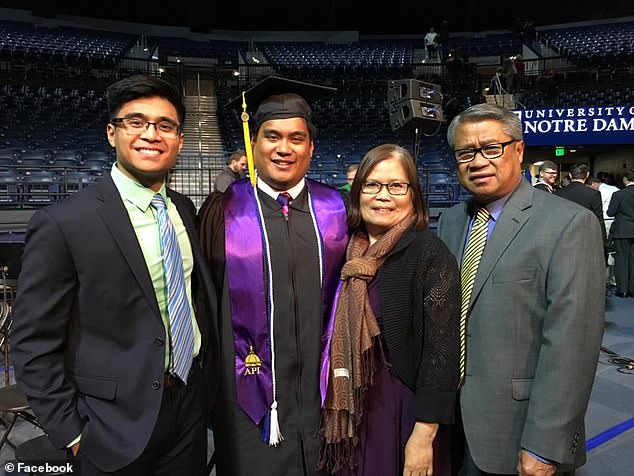 Yap-Banago is pictured with her sons, Jhulan and Josh, and husband Amado at Josh’s graduation 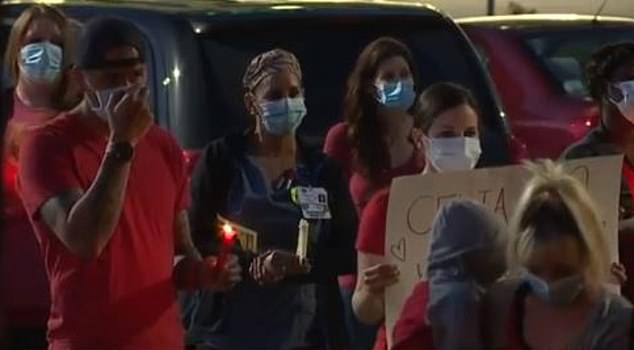 Hundreds of people attended the vigil for Yap-Banago on Thursday

‘We don’t know exactly what happened, if it was directly by the virus or by complications by the virus,’ Josh explained.

‘She was obviously sick for so long that being in that position, you become so much weaker. Was it directly the virus? Was it her getting sick from something? We don’t know. Ultimately, we just know the end result.’

Josh said the family is planning a funeral and hope to have visitation for loved ones to say their goodbyes to Yap-Banago, who emigrated from the Philippines years ago.

‘She was a great mom, I can’t stress that enough. From all my friends reaching out to me, the one thing they all say — even though most of them have never met her — is that based on your character, seeing you, your brother, how you guys interact with other people, she had to be a very strong, independent woman, an amazing woman at that based on what she does and how she lives her life,’ he said.

‘I’m glad other people are learning about her and what she’s done. I’m glad [her story] is getting out there, and hopefully it all gets better soon, and people can learn from this.’ 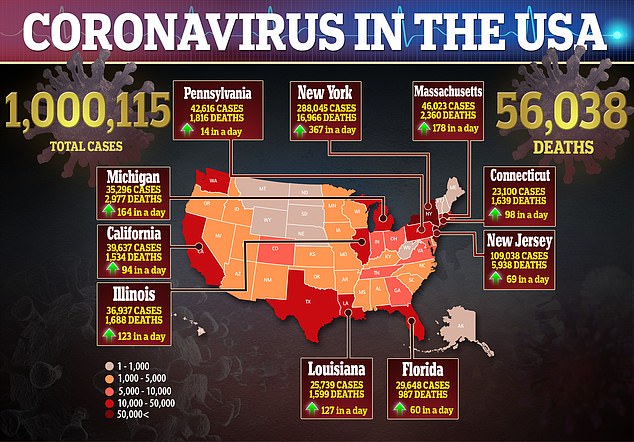 America’s COVID-19 case count surpassed one million on Monday, with at least 56,038 deaths