Nurses have warned the new Health Secretary that they must be given an immediate pay rise as they threaten to strike.

The Royal College of Nursing (RCN) wants Steve Barclay to end a three-month delay and award its members a double-digit pay deal.

The union said a survey of almost 1,500 people in England showed that public support for nurses taking industrial action has risen sharply.

In May, 42 per cent of respondents said they were ‘very’ or ‘quite’ likely to back nurses but this has now risen to 49 per cent.

In its evidence to the Pay Review Body, the RCN called for a pay rise of 5 per cent above the level of RPI inflation, which is currently over 11 per cent. 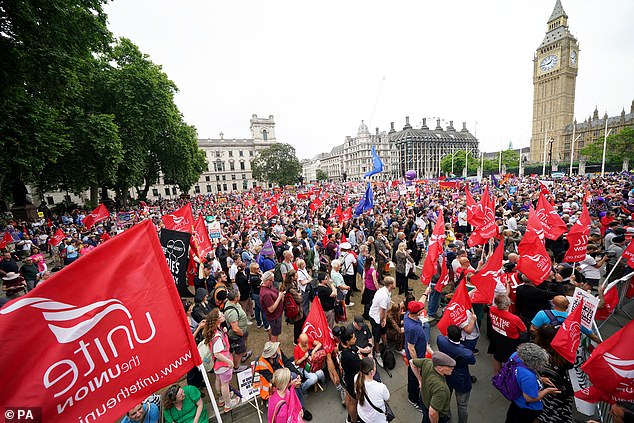 Unison members and members of the public take part in a TUC national demonstration outside Parliament to demand action on the cost of living. Nurses are one of many groups threatening to strike including teachers, following the rail and Tube strikes in June 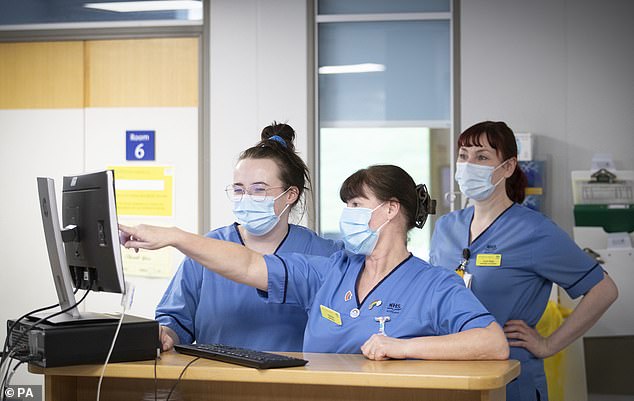 But ministers have suggested a 2 per cent to 3 per cent award.

Pat Cullen, RCN general secretary, said: ‘Lack of staff is putting patient care at risk. The pressure on nursing is unrelenting and now soaring inflation means staff are struggling to pay the bills and going to food banks.

‘They are leaving the profession in their droves – the incredible financial hardship they face is proving the final straw.

‘After a decade of pay cuts by government, nursing cannot afford to wait any more. Nursing is a highly skilled profession and must be recognised as such – investing in the profession must start with fair pay.

‘No nurse ever wants to take industrial action but nothing is off the table for our members. Nursing staff may feel they have no other choice to protect patient safety.’

Sara Gorton, head of health at the union Unison, said: ‘The Government’s leadership vacuum is no excuse for further delay on putting NHS pay right.

‘The Government is already months behind its own timetable.

‘Surging costs are having a terrible effect on staff and helping them should be top of the priority list for the new Secretary of State, not an afterthought.

‘Pay is crucial in making sure the NHS is properly staffed and able to provide the care that patients need.

‘Making a proper wage award will show that ministers are serious about protecting the health service and the millions who rely on it.

‘It’s high time the Government released the PRB reports to let nurses, healthcare assistants, porters, paramedics, cleaners and all the other vital NHS employees know if the inflation-busting pay rise they deserve will be delivered.’

A government spokesman said it is ‘considering the recommendations’.