Goldman Sachs has issued a grim forecast, predicting that U.S. gross domestic product will plummet by 24 percent in the second quarter of this year, by far the largest drop since detailed records have been kept.

The investment banking giant issued its revised forecast in a note on Friday, dramatically slashing its economic forecast as the brutal economic impact of coronavirus in the U.S. becomes clear.

The Goldman Sachs forecast predicts that quarter-on-quarter annualized GDP will decline 6 percent in the first three months of 2020, and then drop another 24 percent in the second quarter, with the bottom coming in April.

That would be more than double the largest quarterly drop in GDP on record, which is a 10 percent decline in the first quarter of 1958 during the ‘Eisenhower Recession.’ 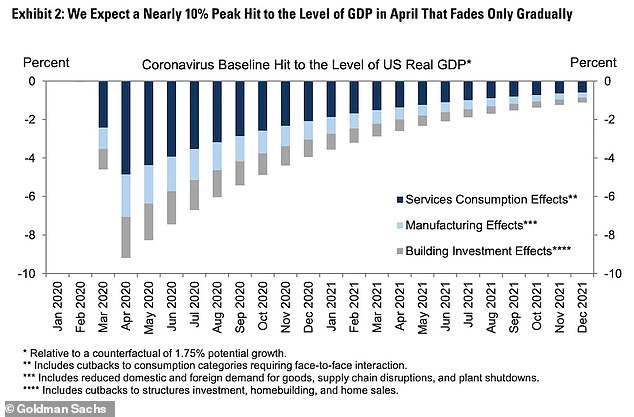 Quarterly growth in GDP is seen going back to 1947, with recessions shaded in grey

Federal data on quarterly GDP growth only goes back to 1947, and does not include the Great Depression in the early 1930s.

Gross domestic product, or GDP, is the measure of all production and output in a country, and is a key measure of national wealth and prosperity. A recession is technically defined as two quarters of negative GDP growth.

The Goldman Sachs forecast predicts that the pandemic and drastic containment measures, which have already cost countless workers their jobs, will have severe economic impact.

‘We expect declines in services consumption, manufacturing activity, and building investment to lower the level of GDP in April by nearly 10%, a drag that we expect to fade only gradually in later months,’ the note said, according to an excerpt shared by CNBC contributor Jim Pethokoukis.

Goldman Sachs predicts a relatively quick recovery, however, with growth surging in the second half of 2020. 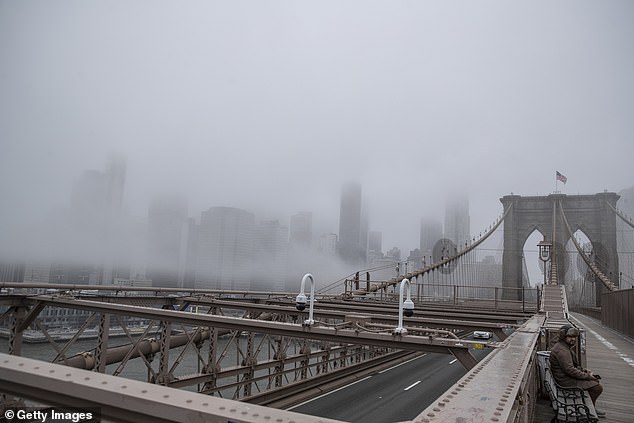 Fog envelops the Manhattan skyline on Friday as the Brooklyn Bridge sits nearly empty of traffic. The economic impact of coronavirus is forecast to be brutal

Quarterly growth in GDP is seen going back to 2005, with recessions shaded in grey

Goldman Sachs expects full-year growth in the U.S. to be -3.8 percent on an annual average basis.

The grim forecast joins other predictions that the pandemic will wreak havok on the U.S. economy.

Ray Dalio, founder of hedge fund Bridgewater Associates, has said corporations in the United States will lose as much as $4 trillion due to the economic damage from coronavirus outbreak.

The Trump administration is pushing for a package of some $1.3 trillion in aid to help businesses and individual Americans devastated by the virus, which Dalio said on Thursday should be nearly doubled.

The fiscal stimulus package should be $1.5 trillion to $2 trillion as a minimum, depending on the form of the financial relief such as loan guarantees and credits, Dalio told CNBC in an interview.

‘We’re in an economic downturn. What you’re seeing is the inability of central banks to stimulate monetary policy in a way that is normal,’ Dalio said in the interview. 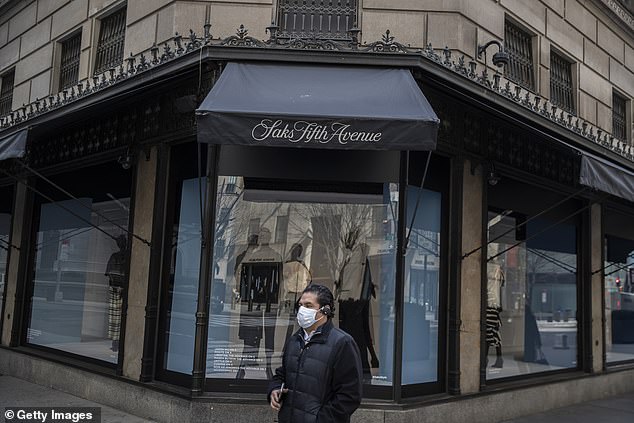 Pedestrians pass by the closed Saks Fifth Avenue Department store in Manhattan this week. Countless jobs have been lost as businesses shutter across the country 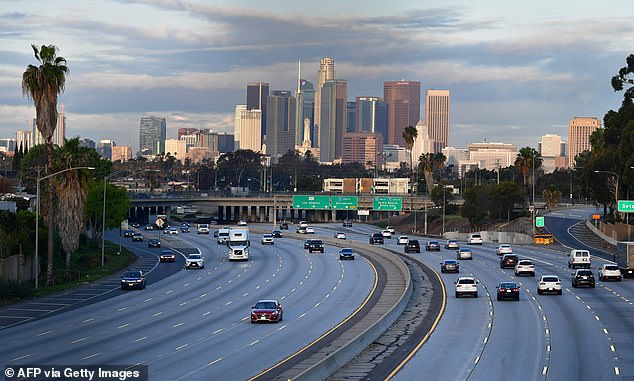 Dalio also estimated that global corporate losses will amount to $12 trillion due to the pandemic.

It comes as Bank of America’s chief U.S. economist warned that the recession has already begun.

In a note to clients, the bank said the U.S. economy is in a ‘deep plunge’ brought on by the global coronavirus pandemic.

‘We are officially declaring that the economy has fallen into a recession … joining the rest of the world, and it is a deep plunge,’ Michelle Meyer wrote. ‘Jobs will be lost, wealth will be destroyed and confidence depressed.’

The great unknown remains how long containment measures will be needed. The longer they last, the deeper the economic damage will be.

Former Trump administration economist Kevin Hassett told CNN on Thursday that if everyone stays home for six months, ‘it is like a Great Depression.’

Hassett said the April jobs report will be ‘the worst jobs number you ever saw.’