One of only 37 surviving pages from original manuscript for The Hound of the Baskervilles goes on sale for £145,000

An extremely rare, surviving page of the original manuscript for Sherlock Holmes novel The Hound of the Baskervilles has emerged for sale in the US for £145,000.

The page is one of the 185 pages in the original manuscript which were offered to dealers as part of the book’s extensive publicity campaign.

However, since Doyle wrote on acidic paper, most have disintegrated over time and only 37 are known to exist today – including all of Chapter 11 which is preserved in the New York Public Library. 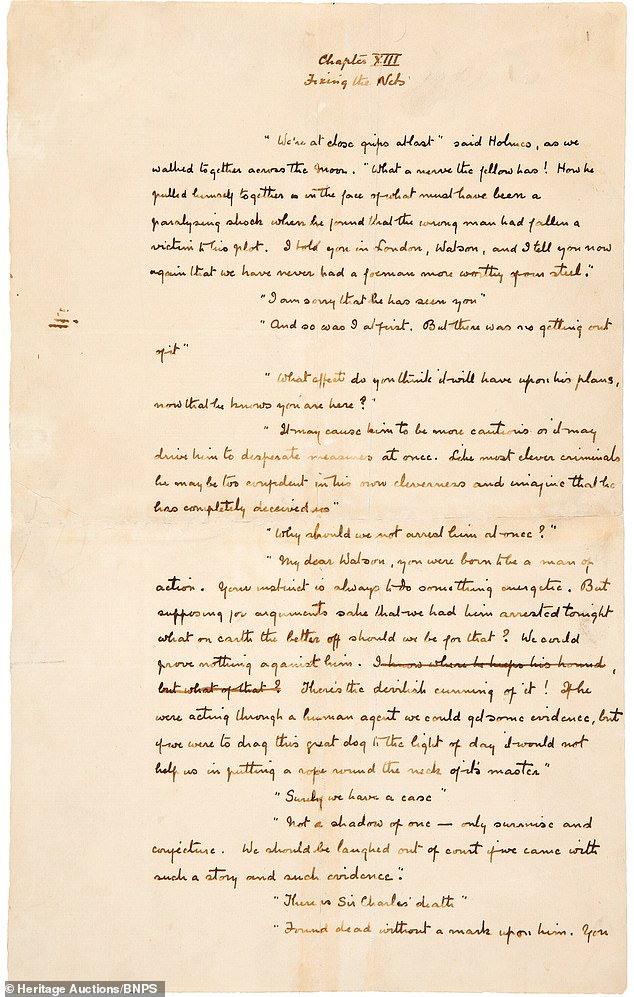 An extremely rare, surviving page (pictured) from Sherlock Holmes manuscript , The Hound of the Baskervilles by Sir Arthur Conan Doyle, is being sold for £145,000 in Dallas, Texas

The 8ins by 13ins handwritten page being sold, which is still in reasonablly good condition, is headed ‘Chapter XIII, Fixing The Nets’.

It involves Holmes and Watson discussing a mysterious murder on the moor, and whether to arrest a suspect. It has a line crossed out where Sir Conan Doyle edited the piece.

In dialogue written on the page, Holmes says: ‘My dear Watson, you were born to be a man of action. Your instinct is always to do something energetic.

‘But supposing for argument’s sake that we had him arrested tonight, what on earth the better off should we be for that? We could prove nothing against him.’

The manuscript is being sold by a private collector with Heritage Auctions, of Dallas, Texas for $200,000 and the sale takes place on November 6.

A Heritage spokesperson said: ‘After killing off his popular character Sherlock Holmes in 1894, Doyle brought him back eight years later in The Hound of the Baskervilles, a book that has proved to be one of the more popular of the series. 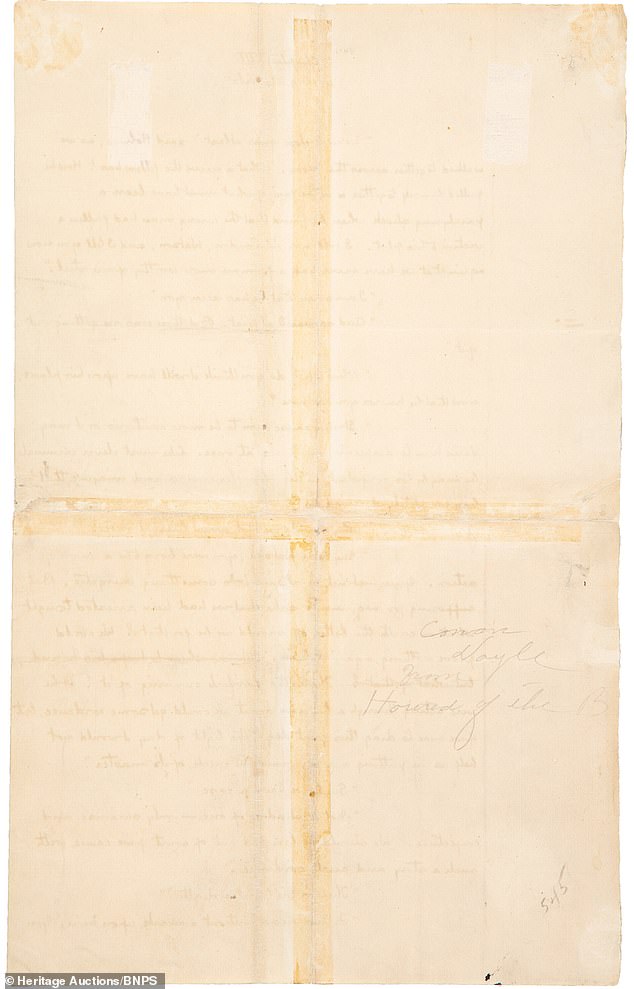 The single handwritten page is one of 37 pages remaining from the original 185 pages in the original 1902 manuscript and is up for auction in Dallas, Texas on November 6

The dialogue on the page up for auction involves Sherlock Holmes and Watson discussing a mysterious murder on the moor, and whether to arrest a suspect

‘To promote the book and the return of Holmes, the American publisher, McClure, Phillips & Company (New York) asked Doyle for the original manuscript, and mounted an elaborate publicity campaign for the book by breaking up the pages and offering them one by one to dealers who purchased copies.

‘Unfortunately, due to the fact that this particular manuscript was written on highly acidic paper, and the individual pages were mounted with equally acidic backing material, most of the pages used in the promotion have not survived either their framing or their display conditions.

‘Only a very small percentage exists today, and few are in as good condition as this particular leaf.’

Joe Maddalena, executive vice president at Heritage, added: ‘Sir Arthur Conan Doyle is one of the most beloved and important mystery writers of all time.

‘He is known best as the creator of Sherlock Holmes, but most of that was in short stories – this leaf is from one of just four Sherlock Holmes crime novels.

‘This is one of just 37 known to exist, but most are in libraries and private collections, which only increases this leaf’s significance.’