One man, his dog and 4,500 miles of rubbish: Pair collect 20,000 bin bags of litter during their mission to walk the coast of Britain 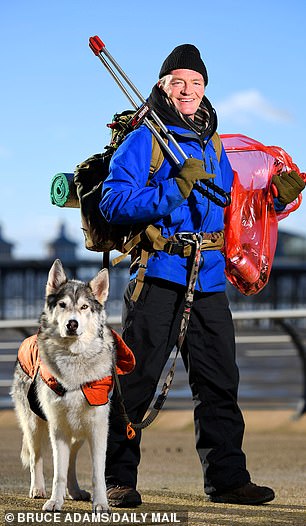 Kitted out: Mr Dixon and Koda on the famous beach at Blackpool

When Wayne Dixon set out on a mission to walk the coast of Britain collecting litter with his dog, he was regarded as a bit of an oddball.

But four years and 4,500 miles later, Mr Dixon and his four-legged companion Koda are warmly welcomed as they make stops along their journey.

The pair have collected more than 20,000 bin bags of rubbish to date on their mission from the most northern tip of Scotland down to Lizard Point in Cornwall.

But just as importantly, they have inspired coastal communities to take action and wage war on the waves of litter threatening the environment.

Mr Dixon, 48, said: ‘I’ve seen with my own eyes how the world’s litter washes up on our shores and I can see quite clearly how we are contributing to that problem ourselves.

‘We have become so detached from nature and the big outdoors. There’s a blanket of rubbish covering our entire country. It’s disgusting. A generation have grown up so used to seeing litter everywhere, they don’t even see it any more. They’ve become litter blind.’

What started a plan for a walk in memory of his father, who died unexpectedly in 2012, became a personal pledge to pick up litter.

As he meanders the coast he picks up every piece of rubbish he passes – litter picker in one hand, bag in the other and Koda’s lead attached to his belt. 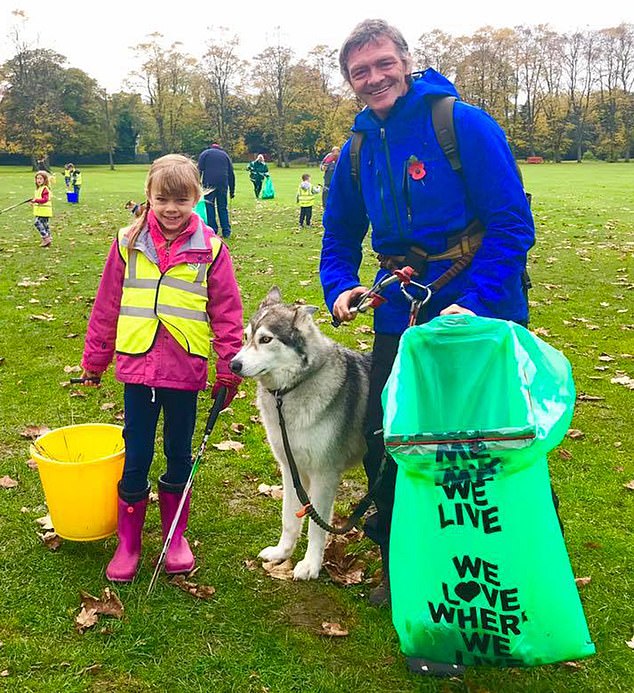 Mission: Wayne Dixon with Elizabeth Gadsdon, eight, on the Wirral. Mr Dixon has also given talks on the scourge of rubbish to more than 100 schools and is keen to stress that this is not just a problem for coastal communities

With a tent, sleeping bag and basic supplies on his back, he pitches up camp each night along his journey.

He started off in January 2016 from his home in Darwen, near Blackburn, and walked the length of the west coast before heading along the southern beaches.

He reached Walton-on-the-Naze, in Essex, before lockdown struck and he was forced home.

At the beginning, Mr Dixon often tackled the mess alone with his northern Inuit Koda – a crossbreed husky.

But ever since his journey went viral on Facebook, he has become a well-known figure on the litter-picking circuit.

Thanks to his celebrity status, he is rarely short of offers of food and a real bed for the night.

He was once greeted by 250 people wielding litter pickers in Southend-on-Sea to help clean up the beach.

And even during lockdown he has continued to collect rubbish and has been busy galvanising his local community.

‘We were told we could go outside for exercise so I took Koda for a litter picking walk every single day,’ he said.

‘In the last few months I’ve managed to absolutely blitz this town. These days when I go out, I only need to take a small bag and mostly what I pick up is discarded PPE.’

He plans to resume his journey in September, in time for the Great British September Clean. 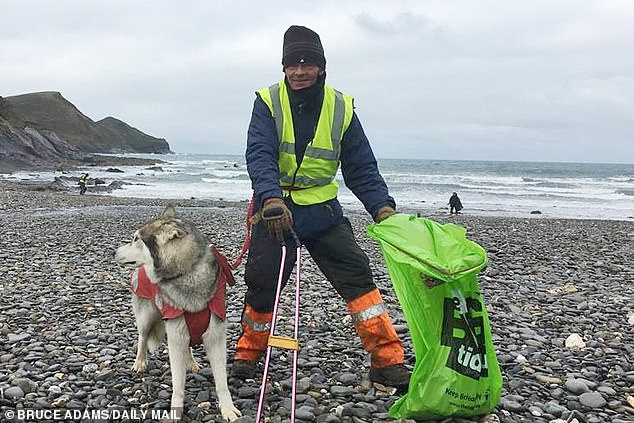 Clean-up: On duty in Cornwall. Thanks to his celebrity status, he is rarely short of offers of food and a real bed for the night

He will make his way up the east coast, around the top of Scotland and finish his journey at Glen Coe.

Mr Dixon has also given talks on the scourge of rubbish to more than 100 schools and is keen to stress that this is not just a problem for coastal communities.

‘How did we acquire this terrible culture of trashing our most beautiful beaches?’ he asked. ‘It’s a cultural embarrassment.

‘But now, it’s our job to clear it all up, which is why I support the Great British September Clean.’

He added: ‘Get out there and help because, believe me, our country needs it.’